I often times wonder what it would take for a rapper to achieve the level of success as someone such as, say, 2Pac or Biggie.   Did you ever notice how rappers seem to be the artists (Van Gogh style) of the music world, in the sense that they don’t seem to get their true following until they’re dead? 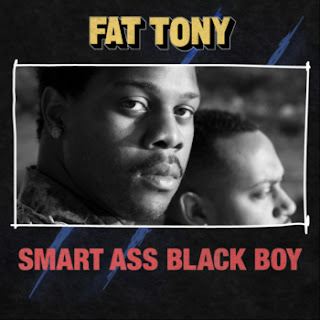 Okay, Dr. Dre can be the exception to the rule, as well as role model for all aspiring rappers, but who is it that is up on top?   Jay Z?   Kanye?  I don’t even want to name more names, but I will say that based on albums, songs, longevity, hard work and everything else, Fat Tony should be a household name and the 2Pac of this new generation.

Who has consistently put out such good albums?   Who is seemingly everywhere yet nowhere all at once?  (Like the wind)  Who is a name that if you know you probably love and otherwise you don’t know it?   Who made “Double Dragon” famous again?

So these are new songs in the form of “Smart Ass Black Boy” because as my family always likes to remind anyone who would call them a smart ass, “It’s better to be a smart ass than a dumbass”.   Do yourself a favor:  Don’t be a dumbass and go buy this record.
Posted by Joshua Macala at 6:44 AM