http://workdrugs.bandcamp.com/album/mavericks
$9.99 for the CD // Free to Stream 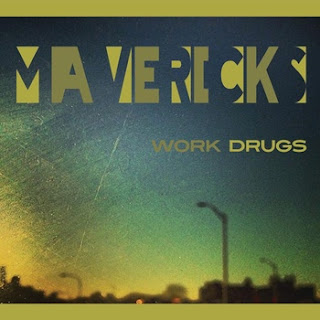 I first heard Work Drugs when I first started Raised by Gypsies.  In that time, I like to believe that I’ve only grown and gotten better as a writer because, well, if I’m not constantly improving and trying to better myself then why am I doing it?

Likewise, Work Drugs seem to only get better with age.   The newest offering is a CD full of catchy sort of upbeat songs that you should play near the pool or at the beach.    I liked these songs so much- from streaming them on Band Camp- that I purchased a physical copy of the CD and I feel everyone else should do that as well.

It’s that not quite Hellogoodbye rock mixed with too cool for the radio rock that makes these songs so easy to blast out your speakers.    The first song released from this album was “Tiger Beat” (Remember that from way back when?) and that one pulls a Polly Scattergood because it ends up at the second to last slot on this album.

The most recent song that appeared on Band Camp prior to this album’s release was “West Coast Slide”, which is still my vote for Song of the Summer.   It appears at spot two, which is pretty much where you want a known song like that to me.

My point is, that this album is so carefully laid out, so that from the beginning until the end you will feel like you’ve already heard it.   It will be so familiar and second nature to you, like a pair of pants that fit you perfectly.  Except instead of clothes you get music, and quite frankly I like music better than clothes.
Posted by Joshua Macala at 8:35 AM