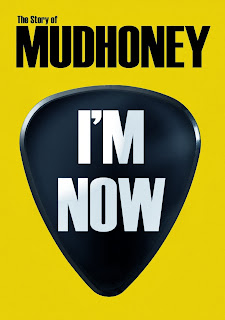 One of the reasons why I enjoy watching movies about bands is because of the kick ass music.  Oh, and the fact that you can often learn things as well.   In some ways (Mainly because music is an audio sense) it’s better to watch a documentary about a band than to read a book about them simply because you get the accompanying music.

In this, the story of Mudhoney, I learned that the band pretty much has had its same line up since it began oh-so-many years ago.   Okay, they may have changed bass players, but still, think about how many drummers Pearl Jam has gone through and keeping the line up together is rather impressive and rare in musical on the whole.

So who are Mudhoney anyway?  On one hand, they’re the pioneers of grunge and that whole Seattle scene, even though lead singer/guitarist Mark Arms didn’t kill himself so they won’t really get as much commercial credit for it as a band such as Nirvana.  (Which is something implied by the documentary, but never outright stated)

Somehow, Mudhoney also isn’t that band that survived grunge and is still adored by the masses and known by everyone everywhere like Pearl Jam and Soundgarden.   That isn’t to say that they aren’t successful or wouldn’t be able to draw a crowd to their shows, it’s just that I’m sure more people could tell you who Chris Cornell or Eddie Vedder was over anyone in Mudhoney.

Ultimately, Mudhoney lands somewhere between Sonic Youth and Dinosaur Jr. in the history of music, yet they still do bring me back to my youth with the whole grunge thing and so I’d still very much love to see them play live and probably will until I’m being wheeled to their shows in my elder years.
Posted by Joshua Macala at 6:35 AM