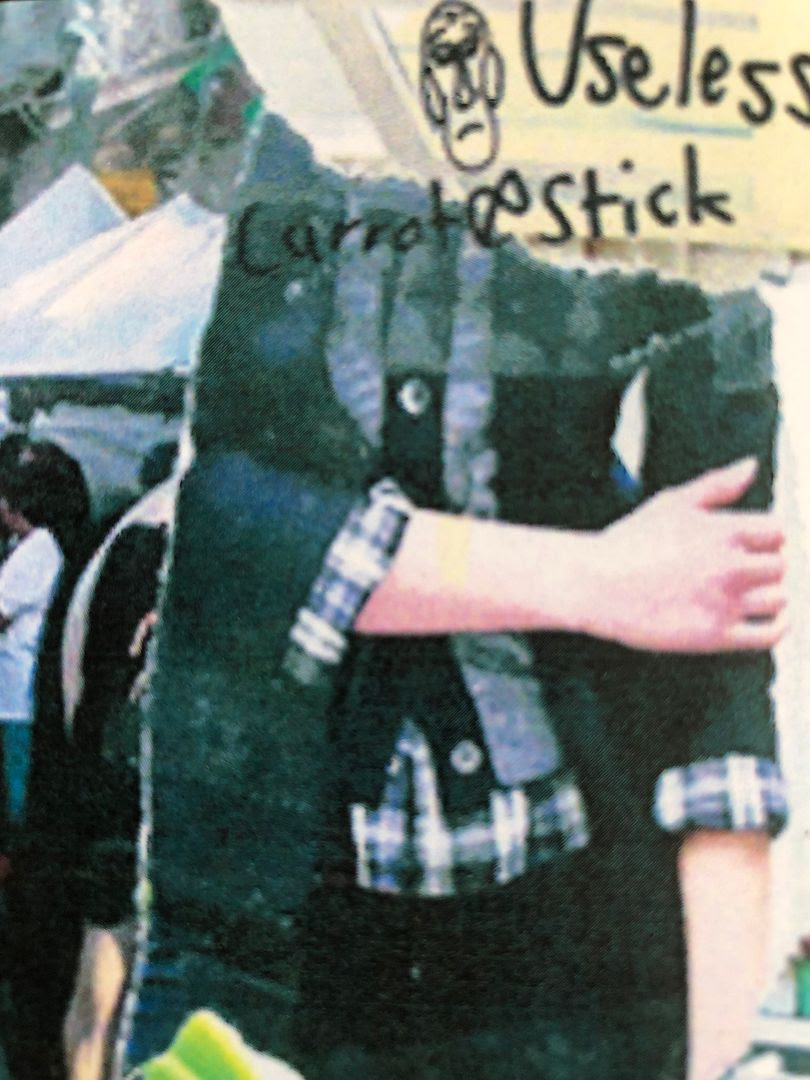 There are times- and not just with Crass Lips Records but with other labels and artists as well- when I've had to use the tracklisting on Bandcamp to kind of help guide me through a cassette.   Sometimes it's just nicer to say "And that song ends the first side" and use the actual song title, which is something I usually have to pick from Bandcamp if it's not in the cassette artwork itself.   For this specific cassette by Carrot & Stick, the Bandcamp is kind of a way to assist you if you want to get a general idea of what this might sound like (If you were to just stream those songs) but I don't think it's an accurate guide to this cassette.   I feel like there are way more songs on here than what is listed on the Bandcamp page.

Also, when I hear the titular track come on I feel like we're more than two songs into this.   There is further proof of this on the second side when "Trampoline" and "The Law" play back to back and it feels like we're going in order with Bandcamp but then that all gets out of order once again.   So the best thing to do with this cassette is just know that you're going to get much more music than what the tracklisting on Bandcamp makes it seem and just enjoy the ride.    Don't worry about following along or playing by the rules.   Fuck the rules.

There is an acoustic aspect to this which reminds me of Violent Femmes and Jim Carroll at the start.   It's weirdo rock but it also turns into "Bleach" era Nirvana.   There is this drivin bass and guitar part which makes me think of "Jaws" and the vocals can be distorted and layered in a way which makes them seem dark.   Through drum machines comes sludge and this just grinds.

While it can feel a little robotic it also is just loud, abrasive.   Sometimes it can be trippy.   Primal screams and drum rolls, but like that huge bass drum you can bang on with those big mallets, and then really loud synth-like tones come in as well.    It shakes the speakers before going into quieter, acoustic string plucks.   The vocals come in and this is just such a quiet and beautiful song now.   A darker glitching type synth drone briefly comes on and then it ends.

Loud clanky guitar rock to start Side B.  It's distorted and lo-fi.   Organs/keys come in and it has a little of that Casio vibe to it.    As "Trampoline" comes on during the flip side I can tell you I've heard more than five songs, but yeah, we're not going to remember that while we just enjoy this, right?   It feels a little bit like "Something In The Way" and then on "The Law" we get the line:  "I don't trust the government or the decisions they make" and really I don't know why anyone would.

An accordion type feel now reminds me of Daniel Johnston  "We're in the attic when we got caught"  There are strings too on this one too.   "They breathe / my scent" takes us into some odd lyric choices but it has that Daniel Johnston feeling to it still mixed with Flaming Lips.    The guitar sound becomes groovy before everything gets quieter and seemingly the entire song shifts to the background.   An audio clip talks about "Staring at a television screen with words on it" and we go from crunchy guitars with screams to those quieter strums, like those Nirvana demos.

It's not something you write about every day where it feels lo-fi and so loud at the same time.   Sometimes, I'd have to turn up the volume on the cassette player to hear what was going on and then sometimes I'd have to turn it back down because it got so loud.   But there are a lot of songs here and a lot going on within them.    If you're a fan of music that isn't afraid to push boundaries and just does whatever it wants then you should be into this as well.