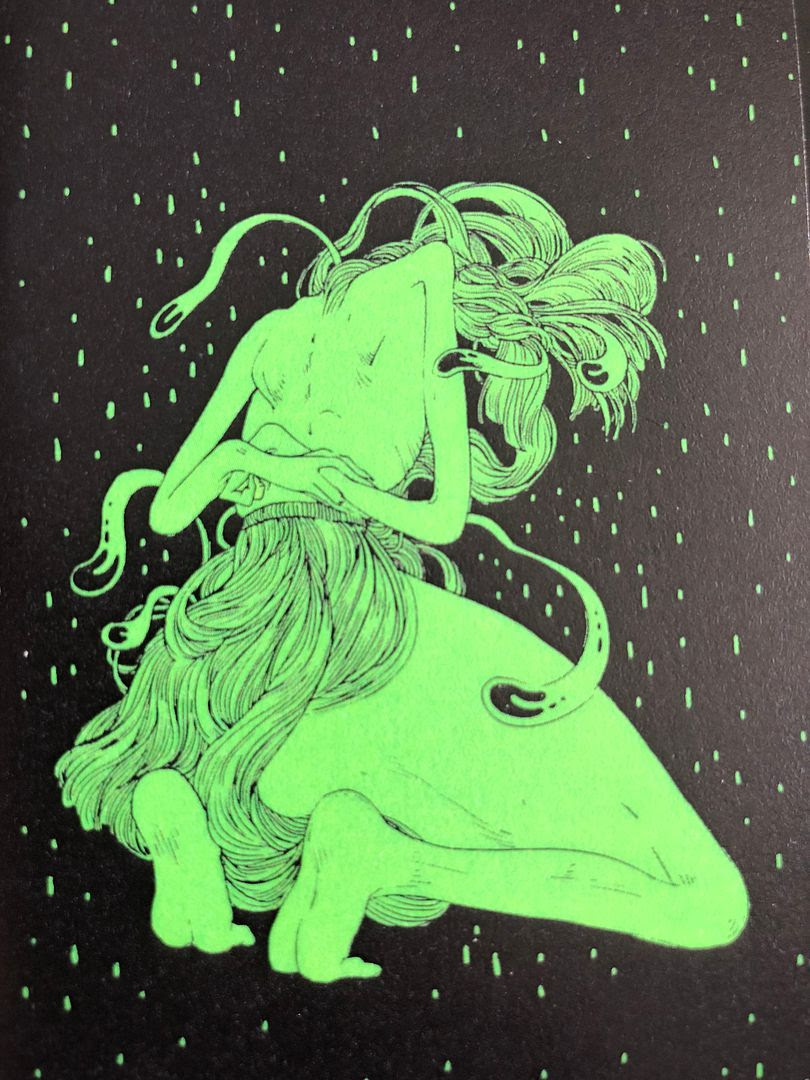 On the surface of this cassette, Nyxy Nyx (Which I read like Marky Mark) creates beautiful, soulful pop melodies along the lines of Elliott Smith and The Lyndsay Diaries.   But at times, they have this Radiohead "OK Computer" vibe to them as well as that wall of distortion such as you would find from a band such as Bush or Hum.    I enjoy this contrast because it feels so non-threatening in ways, like it could never hurt you, but then it just kicks in like it will wreck you.   Sometimes music in that nature can be even harder than hardcore, don't you agree?

The lyrics have that sadness, that loneliness of an artist such as Elliott Smith though.  "Moon" is a song which is kind of a reverse version of this song that I saw on "Sesame Street".  I always loved this song Ernie sang about how he didn't want to live on the Moon because he'd miss everything that he loved on Earth.   Well, the Nyxy Nyx version of "Moon" is about struggling to find your place on Earth and being ready to be taken away to another place where you, perhaps, will fit in better and find more comfort.   I feel like it's easy to feel discomfort within your own community, your own family, your own body really.

While a song like "three-fold return" can just bliss out into music over lyrics, the following song "Does this mean that I'm dead?" (Which I want to see on a t-shirt in 2019) is among my favorites in terms of the pacing, the darkness and the line "I don't know if I'm happy does this mean that I'm dead?"   Why do I think about death so much?  Do I think about it too much?  Do I think about it more than other people?  It fascinates me though.   But happiness is also a funny thing, isn't it?  Any time I feel really, truly happy I can't enjoy it because I'm too concerned with how I will fuck it up and become unhappy again.

These aren't really happy songs, but are you really happy?  Isn't it strange how when you're sad, when you feel down on life (2018 has been waaaaaaaay too long of a year) sad music can help make you feel better?  You'd think that upbeat-happy music would cheer you up, but hearing these Christmas-themed songs now makes me want to punch Santa in his stupid face.    I feel like a lot of people (more every year) say "The holidays are a tough time for me" and most people are just trying to get through them, which is nice that this cassette comes out in December because it's kind of that anti-holiday music, something to flood my earbuds instead of walking in a winter wonderland.

Some songs are big and fuzzy.   Others are just winding guitars which make it feel like we're drifting.   Either way, there is a lot of music talent in this somewhat lo-fi depressing rock cassette and even if you're happy you might enjoy these songs but I think the bigger picture should be that if you are happy you should take a look around at the world (and its impending doom) and ask yourself why you're so happy.    The song "if I was happy then, I'm sad" is a good indicator of this.   Think of all the times you thought you knew what happiness was.

I feel like if I wanted to write a song (or title an album) "Magic Coffin Ride" I'd get told I think about death too much.   I don't think about it in a bad way- like "I'm ready to die"- I just think about what happens when you die and not just to the person who dies but to those left still alive.   In many ways, I'm glad Nyxy Nyx made this cassette of songs because it feels like therapy to me-- something I wish I'd created but would probably be added to my patient file if I did.   So, thank you, Nyxy Nyx for doing the work that others cannot and helping us all out by doing so. 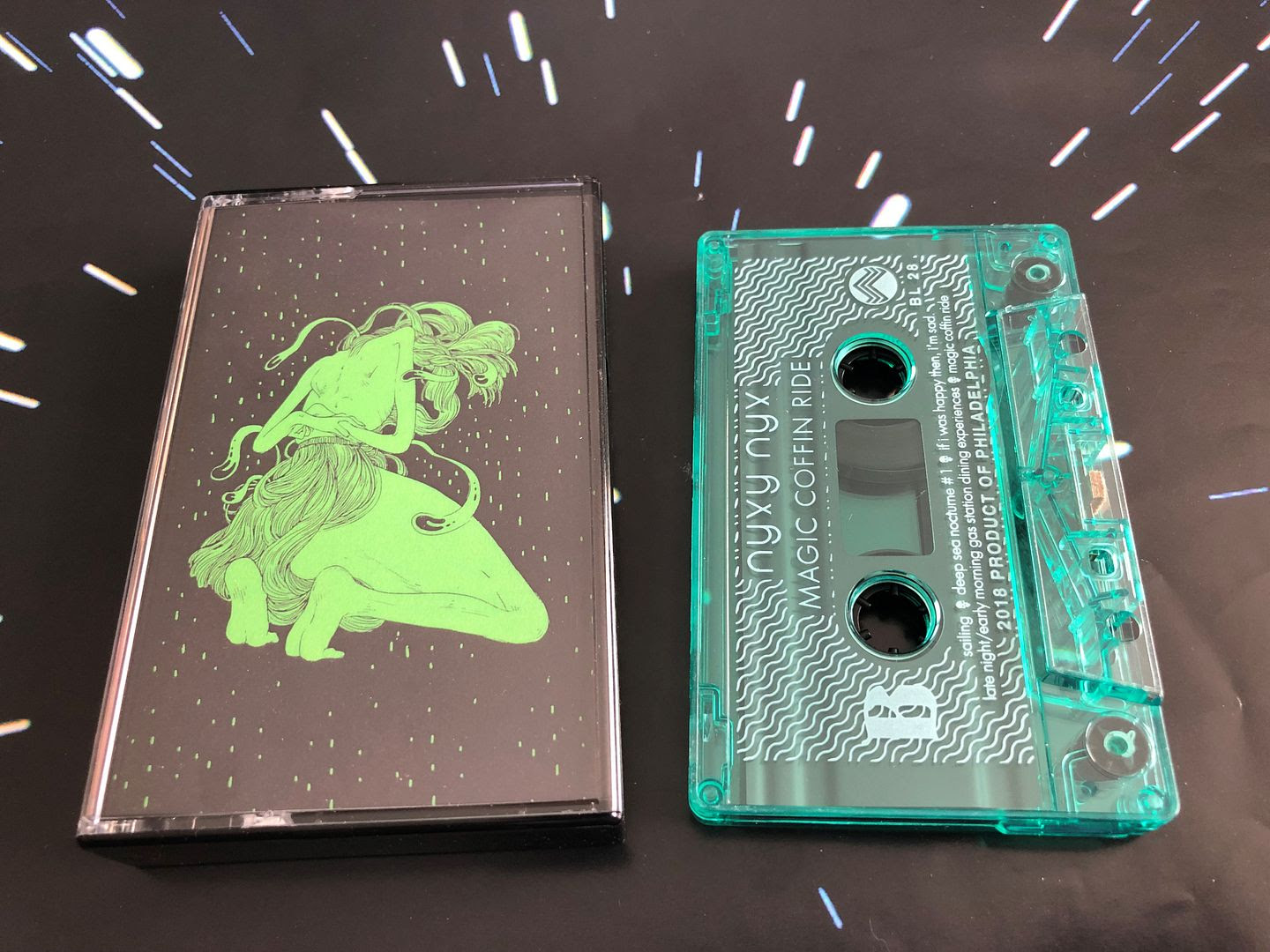 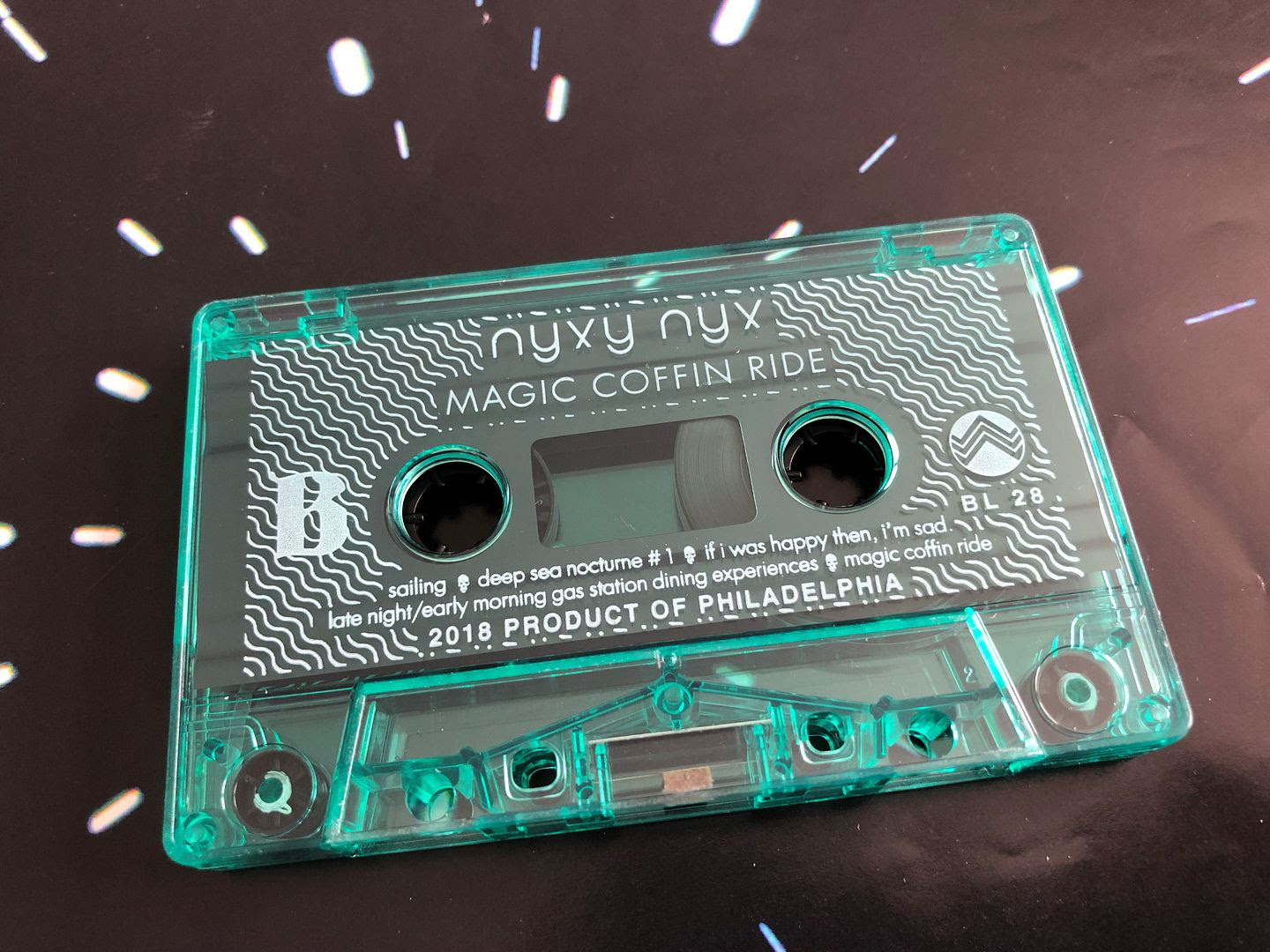 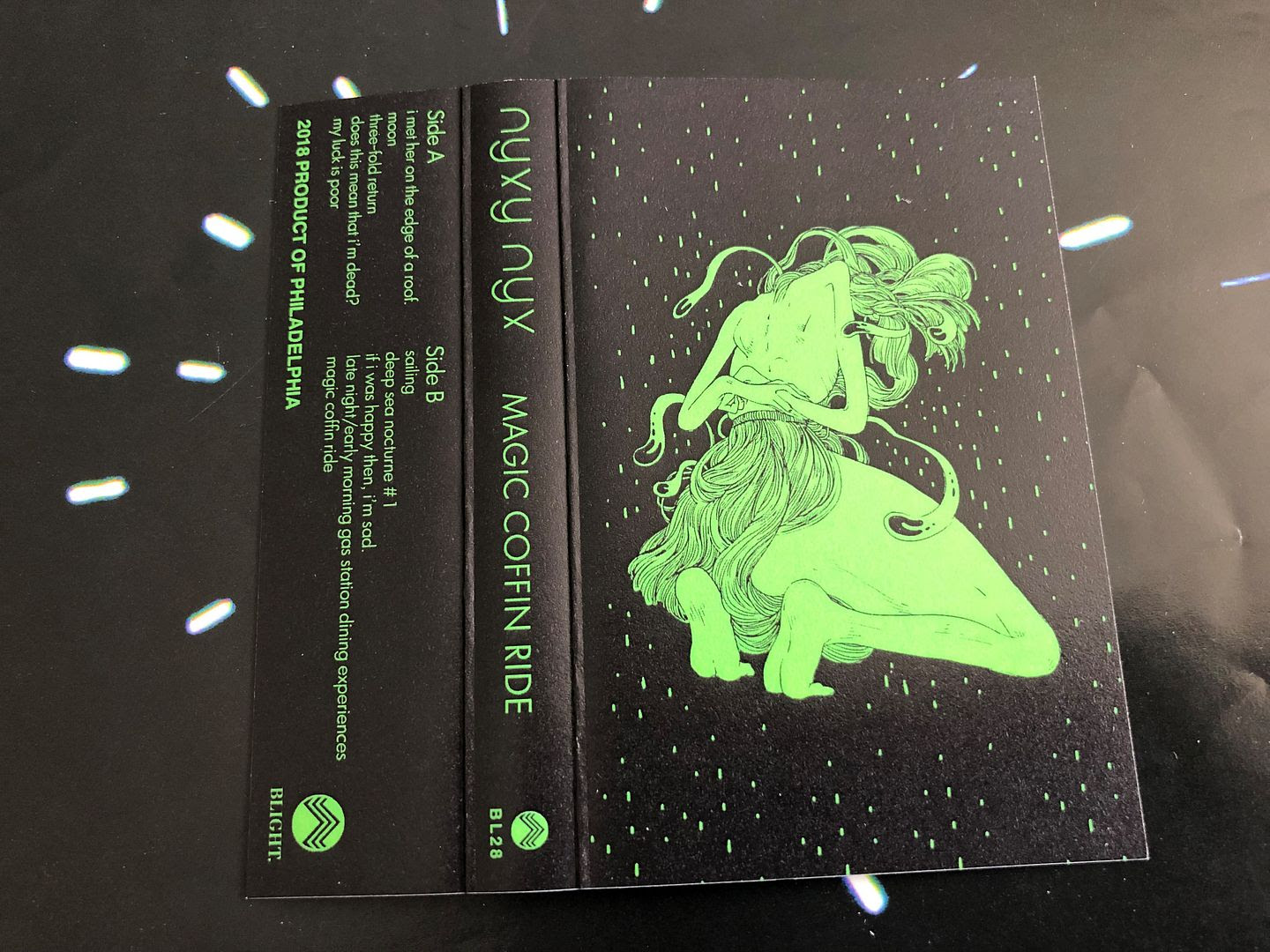 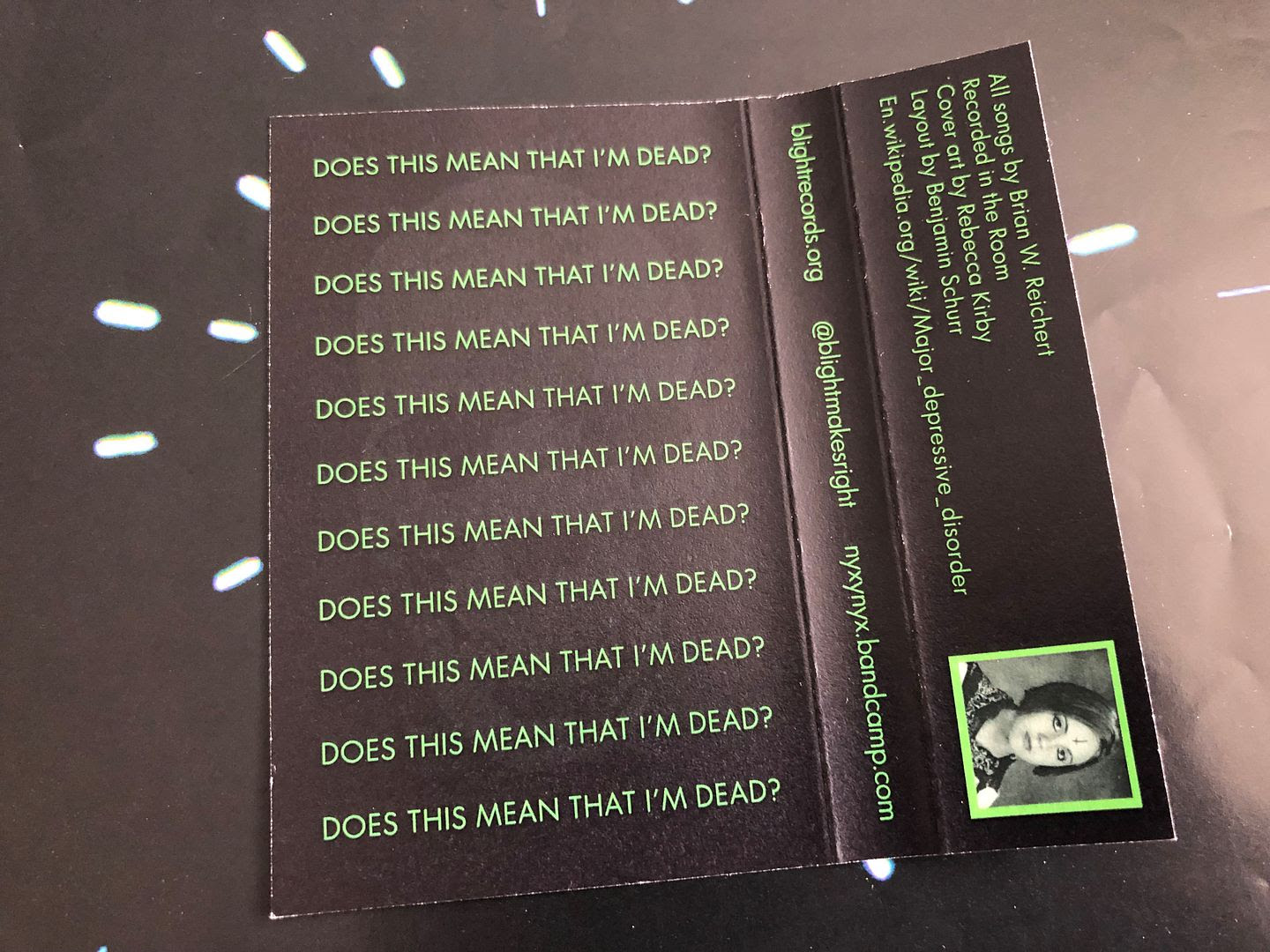