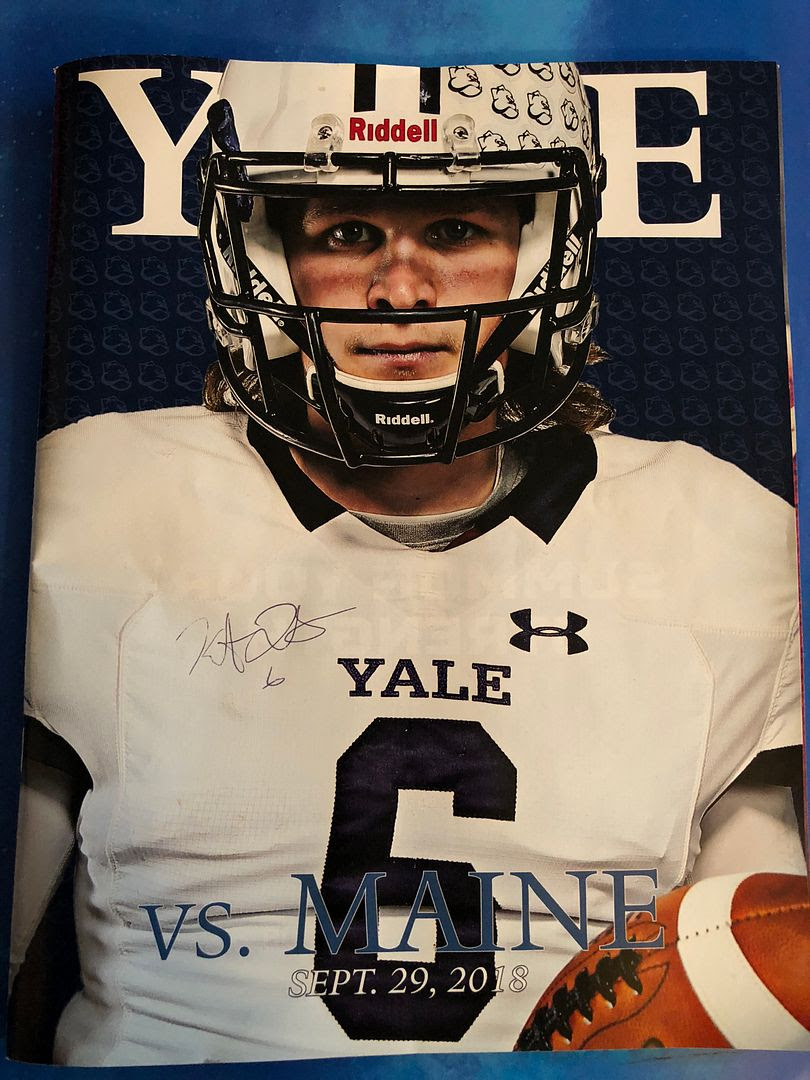 Of the five home games that Yale Football has this year, this is one of the two which is not in the Ivy League.   Oddly, Yale had a record going into this game of 1-1 as they have one Ivy League win and one non-Ivy League loss.   That kind of made this game a bit more odd because had Yale lost they would've been 1-2, which is a losing record, but still undefeated in the Ivy League which is what really matters in some ways.

This game was also "Youth Day" so they had some activities set up for the kids, which we showed up early for Quentin to partake in.   There was no real official bounce house, as Quentin had hoped and as they have had in the past, but the WPLR tent supplied me with some lunch and they had an inflatable corn maze we went through.   There was also something blown up where you could kick a soccer ball, shoot a basketball or throw a football and Quentin was the only kid bouncing around in that.

Generous sponsors of the Youth Day who gave us free stuff included The Big Brothers Big Sisters, Girl Scouts, Yale Police and then there were three tables set up that I'm not sure where they were from.   One was making candy apples, another was making wind sticks and the third was for the kids to paint pumpkins.   All of this was free so Quentin, naturally, did it all.   After painting his pumpkin the guy there said to let it dry and he could come back and pick it up "any time" but we decided to take it into the game with us instead.   When we left, Quentin pointed to the empty field and made a comment on how his pumpkin would not have been there after the game.

Yale Football is a strange place right now because they actually have a good team.  Last season I believe we only went to one game because more than one game was stifled by weather for us and on top of that when the Yale Football season occurs, I was in the middle of trying to find a new place to live and other life issues which felt like everything else didn't matter but now since my life is a little bit more straightened out we hope to enjoy this winning season and see Yale Football win the Ivy League title for back to back years.

When we first got into the game, the Yale Bowl was empty.   People really started coming in during the first quarter for some reason, including a larger group of loud Maine fans who sat right behind us.   There was also one particular Maine fan who kept yelling out his frustrations and he reminded me of Ray Liotta.   The thing is, Yale went up 21-0 early on and it just felt like they were doing better than Maine.   Maine would never really get far with the ball and if they did manage to catch a break they'd blow.   One time they were in scoring position and couldn't get the touchdown but then missed the field goal attempt by a lot.   It was one of the worst field goal attempts I've ever seen at the Yale Bowl.

Yale had their own issues even though they won.   There were several occasions where they should have scored but didn't and perhaps they will examine that before the next game- and the times when Maine scored Yale should have not let them- but still, you have to take the win as a positive and move on.   I'm hoping we 5-0 at home and we can make all of the games as well.     One of the best parts of this game was that Yale felt like they would win the entire time (the Maine fans behind us left at the half to never return) but Maine still planted some seeds of doubt in the second half where they still could have come back to win or go to OT.

As a personal note, I'd like to give a shout out to Yale QB Kurt Rawlings, #6, who took the time to talk to Quentin.   When we first found him after the game he was taking pictures with players from Maine.   Then this woman holding a video camera on her shoulder with one hand and a microphone in the other hand wanted to talk with Kurt Rawlings who instead took the time to listen to Quentin, a six year old fan, asking for an autograph and photo.    The Yale players have always been class acts and this was one of those times where we able to leave the game happy and are very much looking forward to the game on Friday. 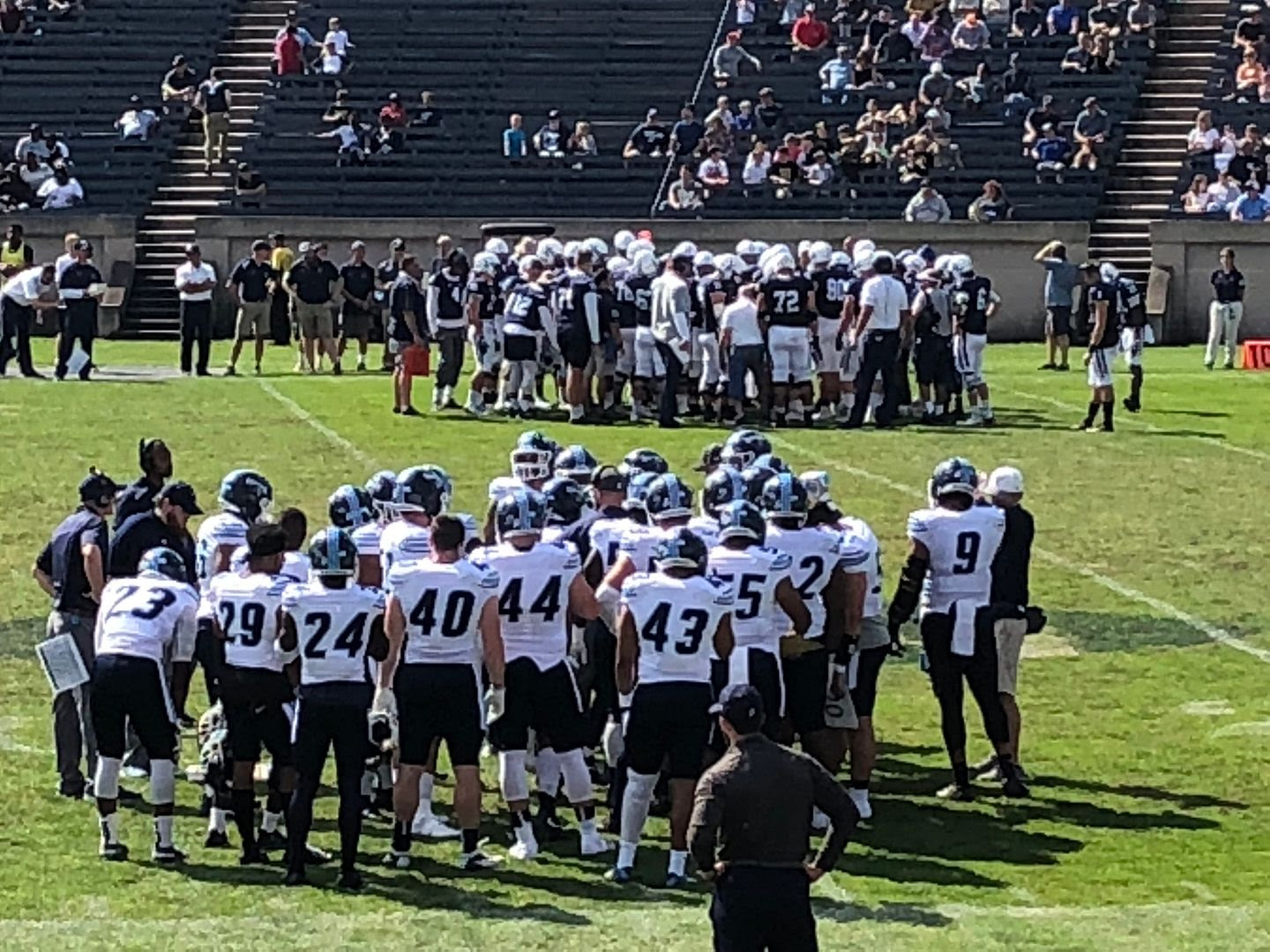 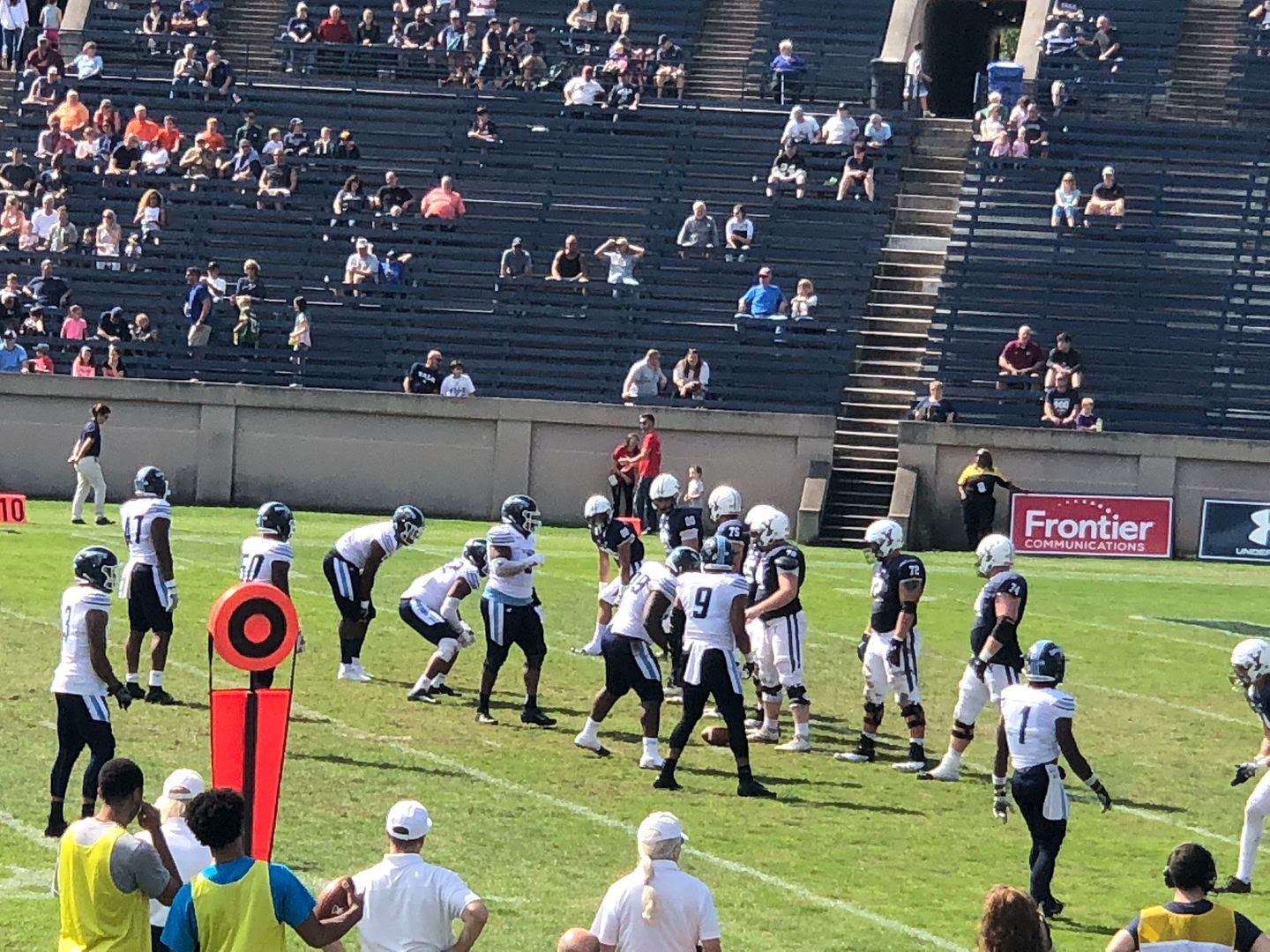 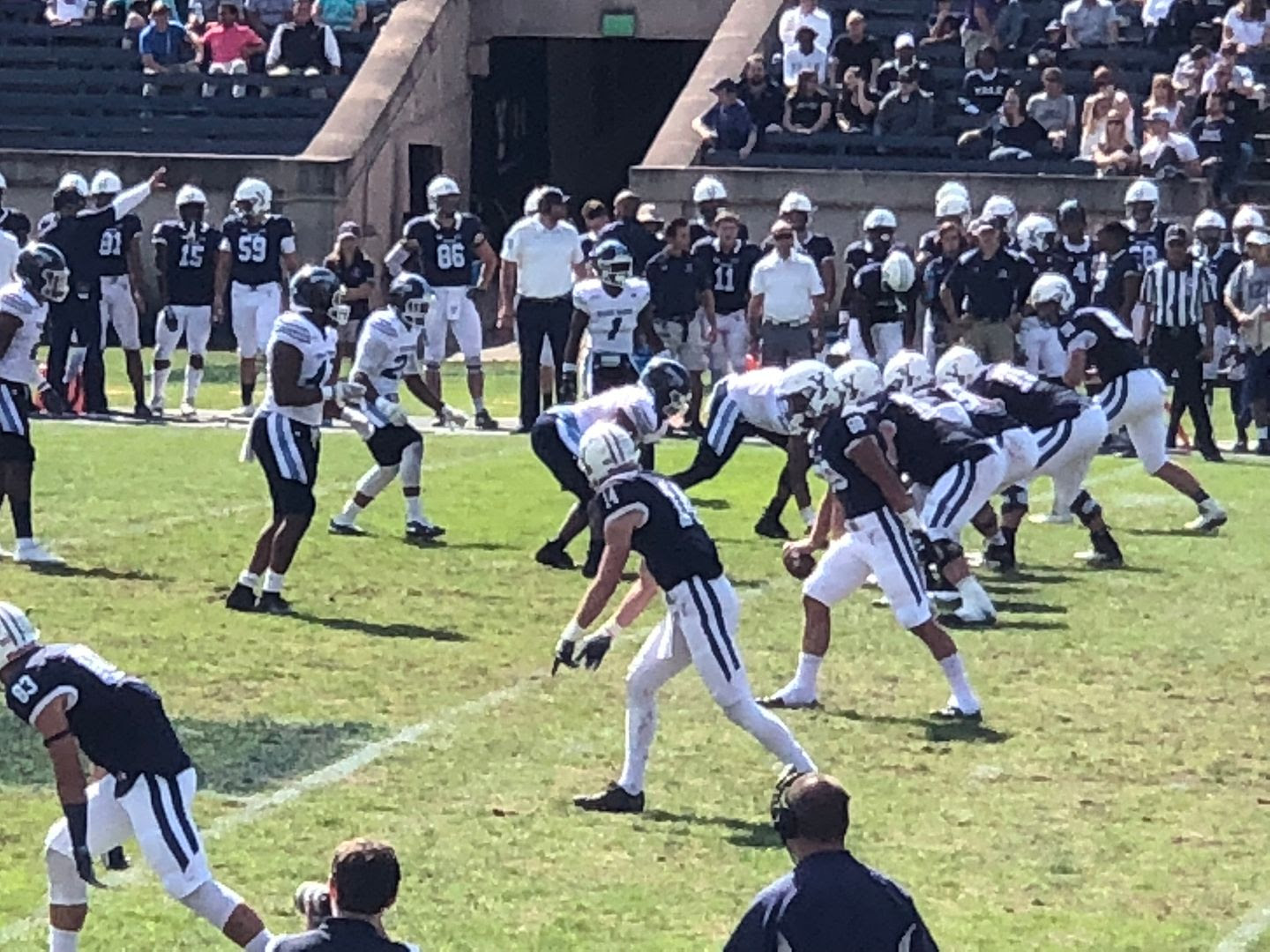 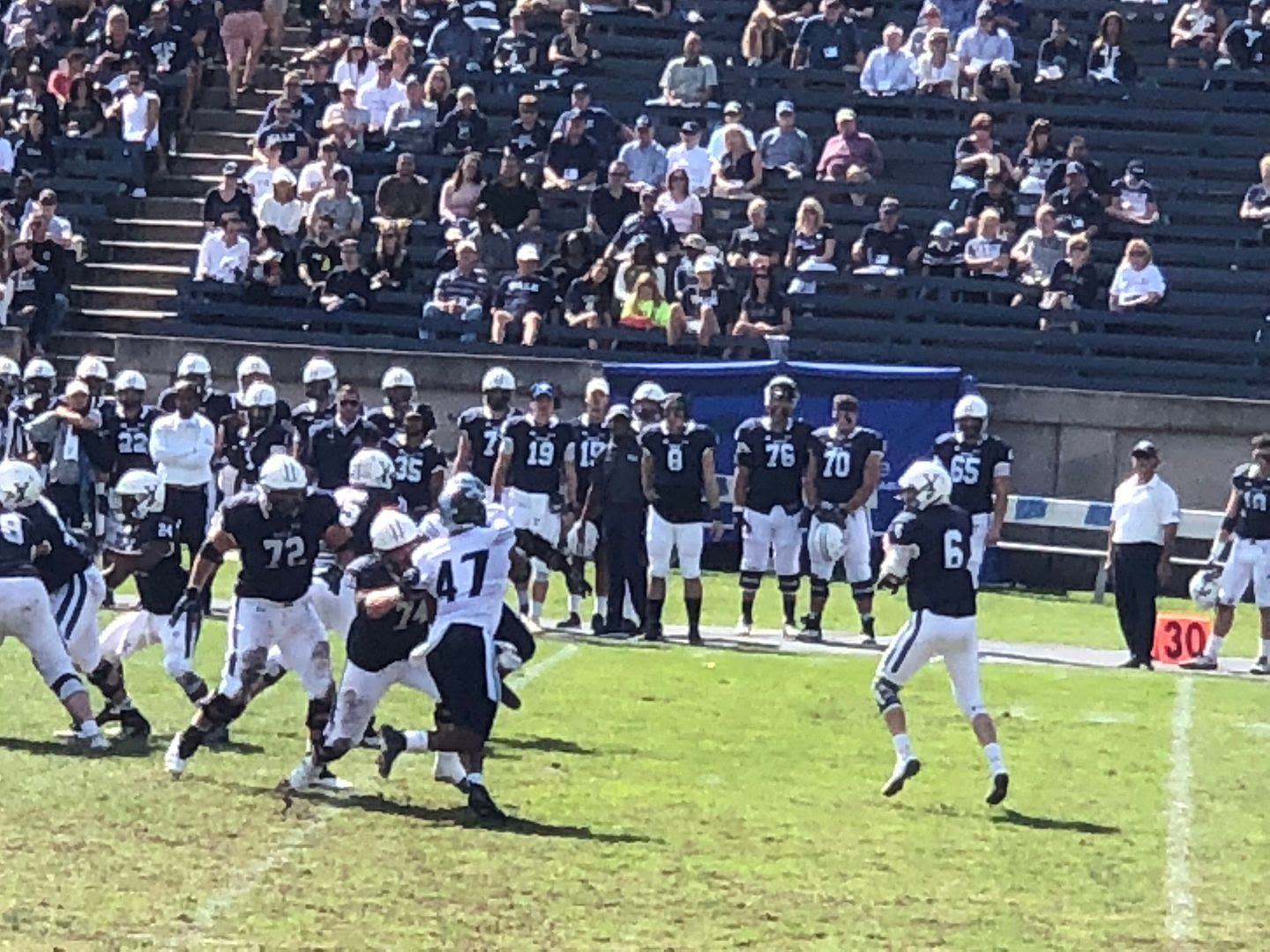 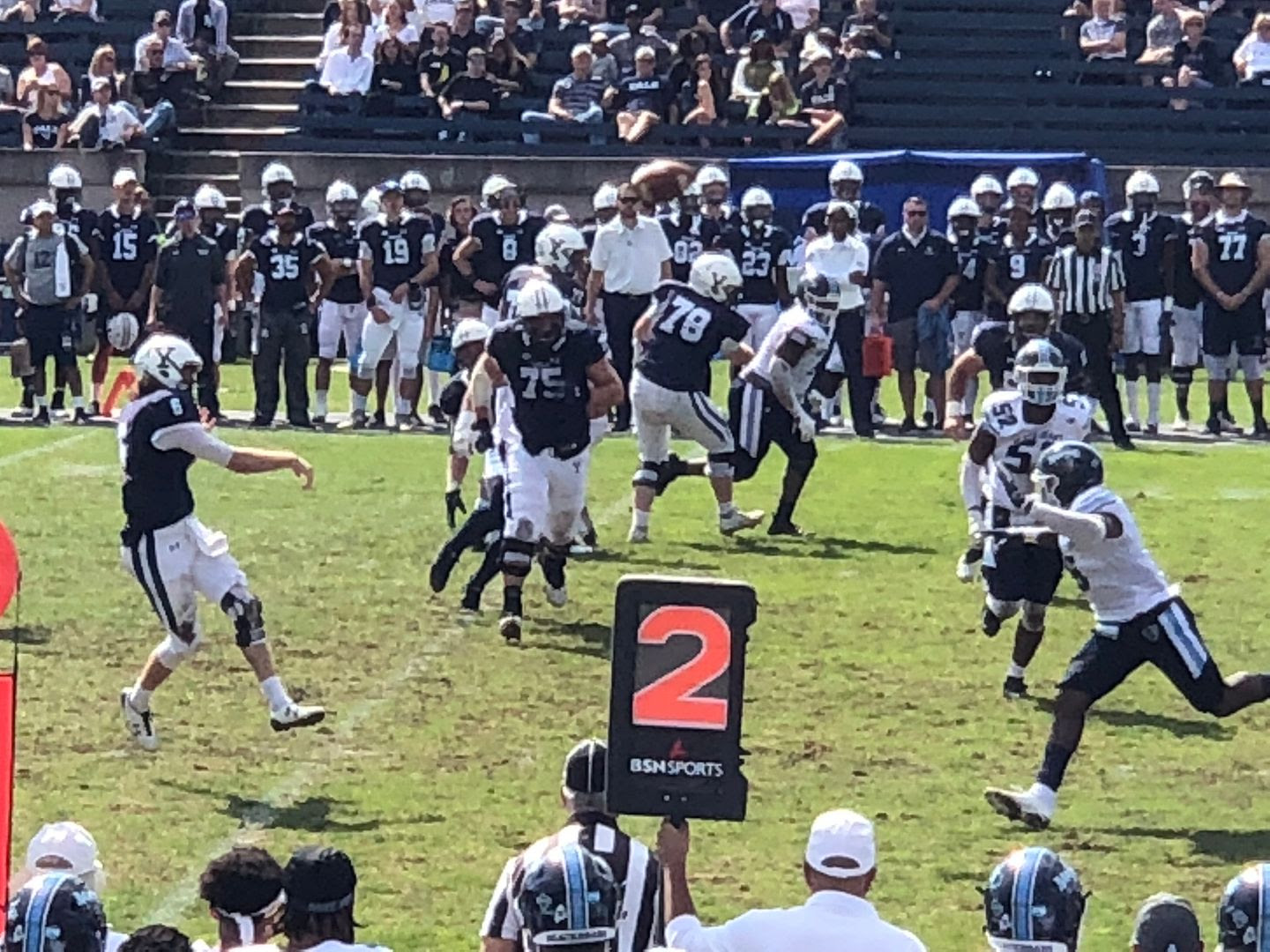 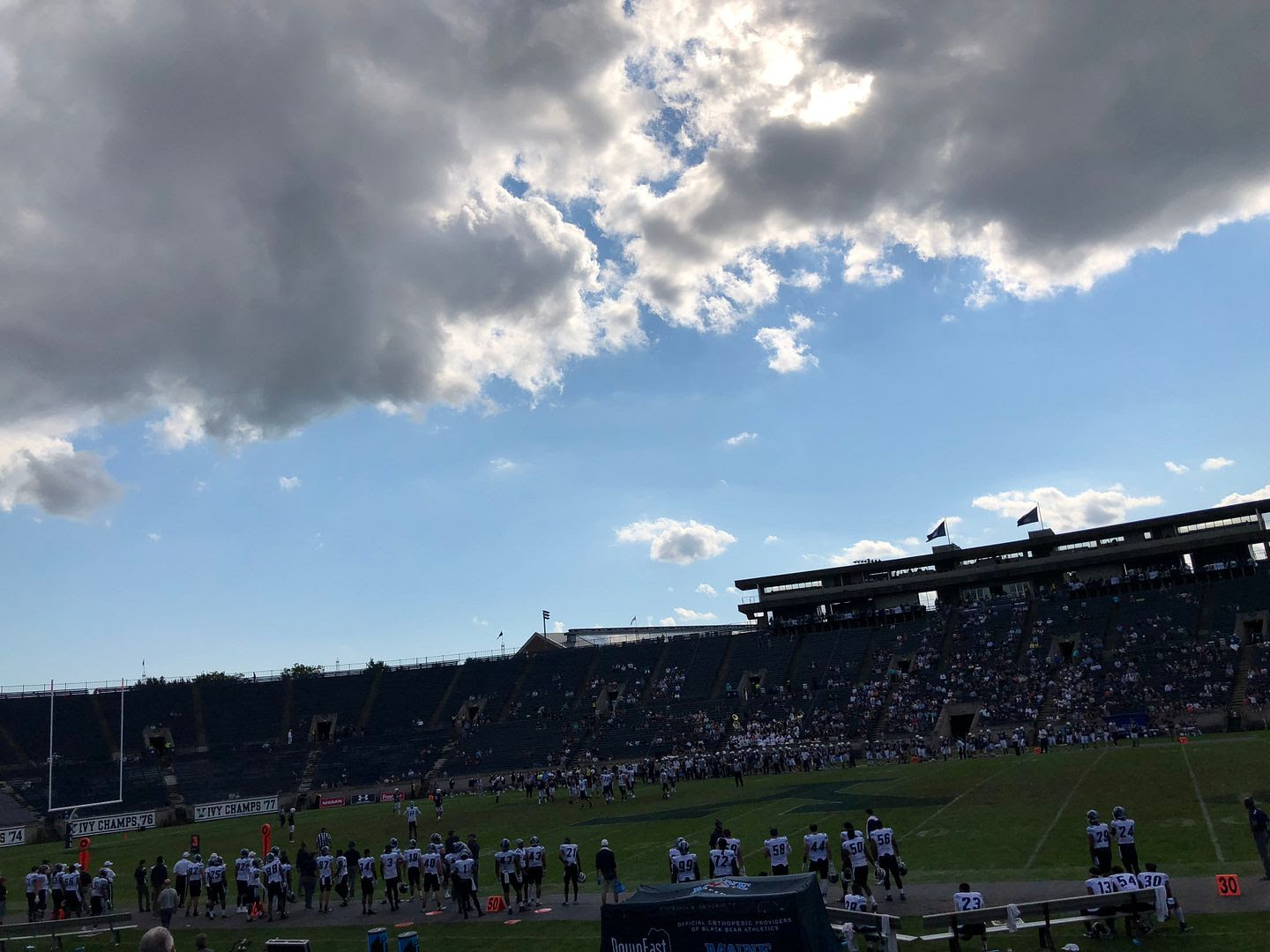 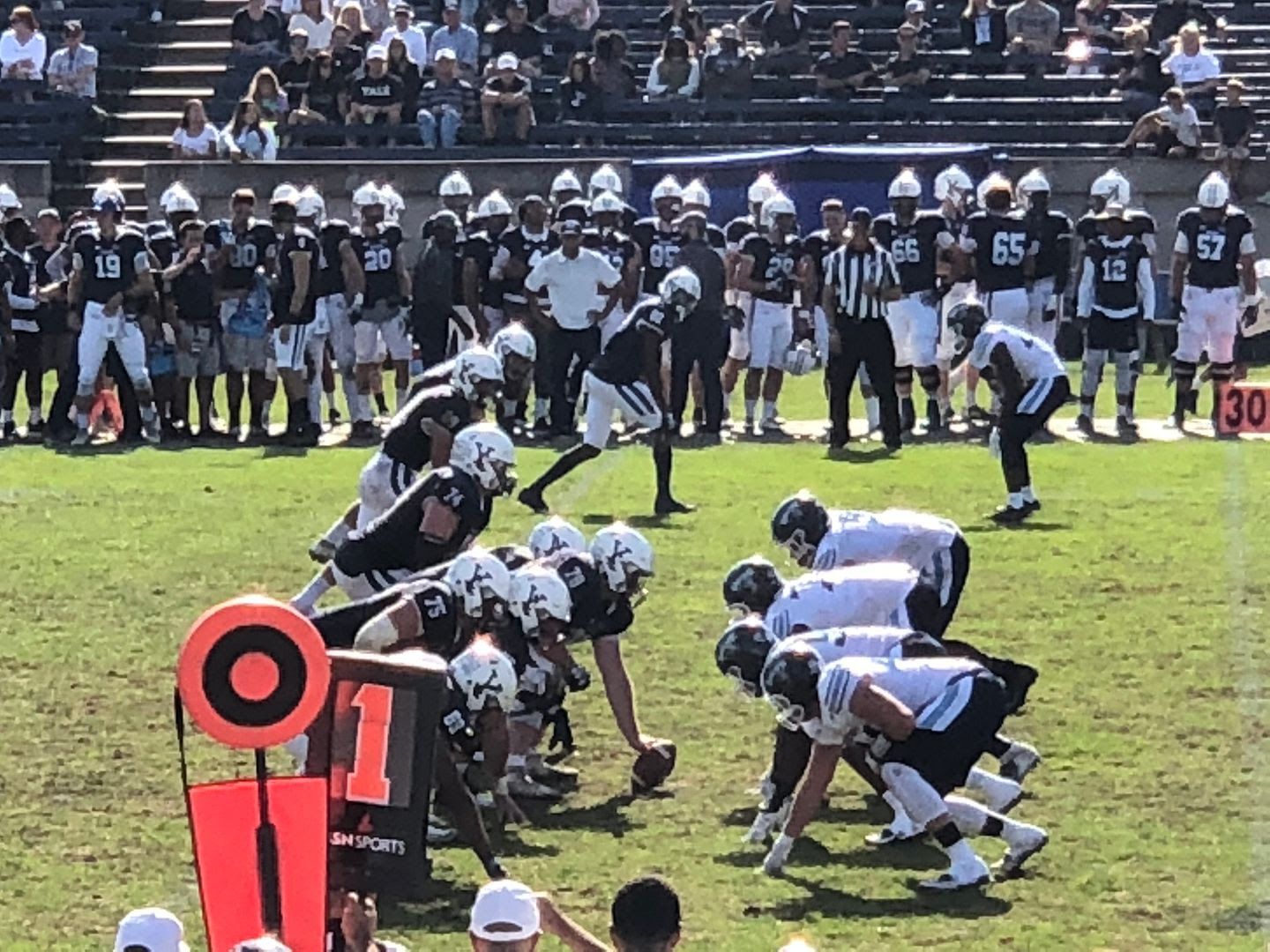 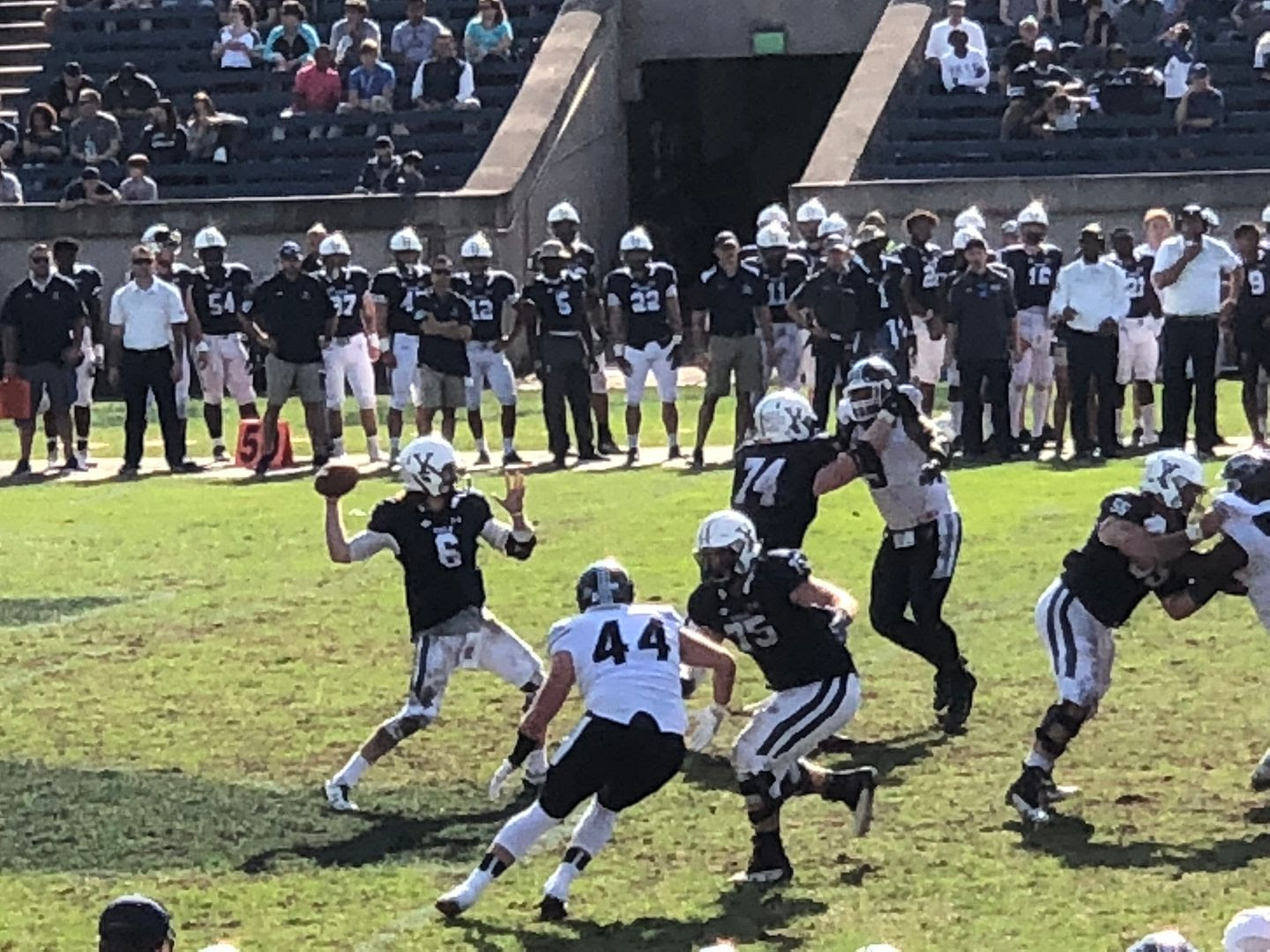 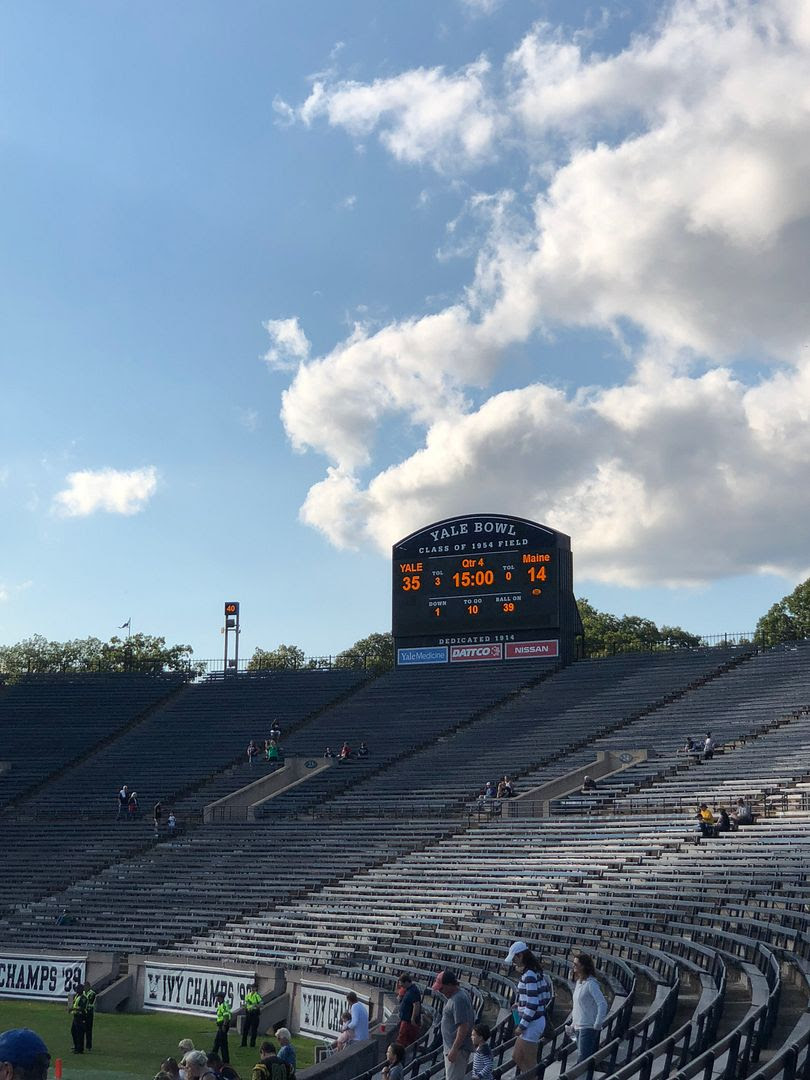 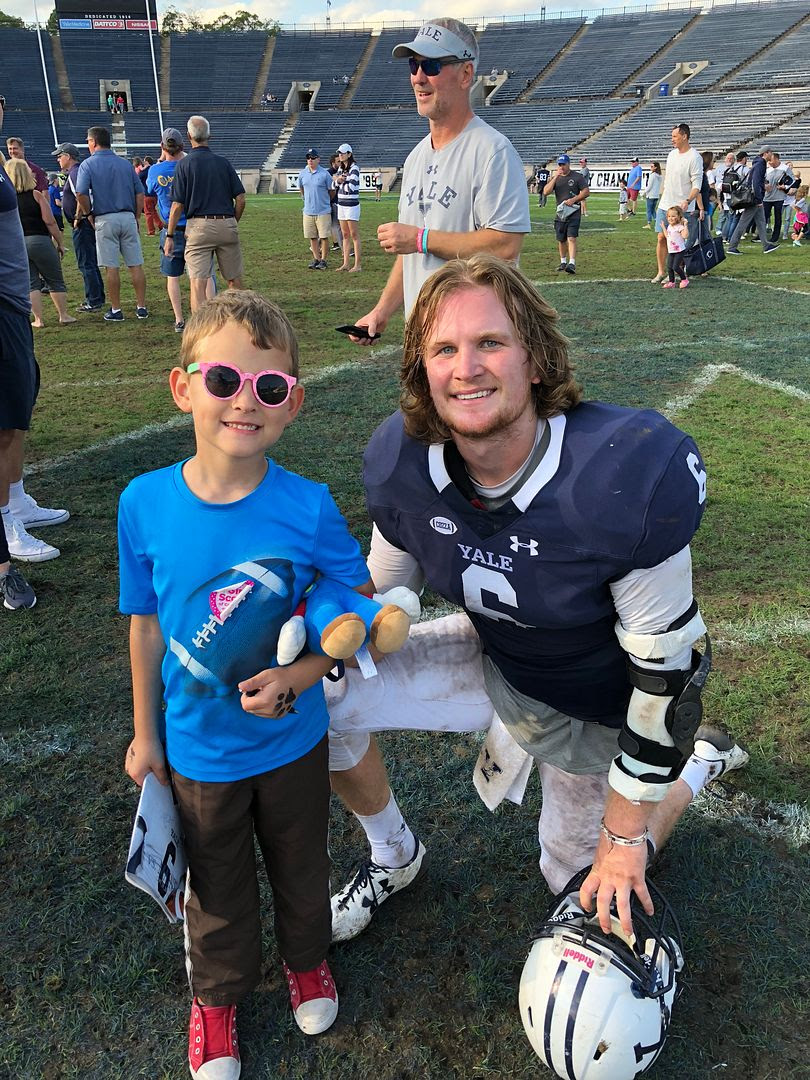