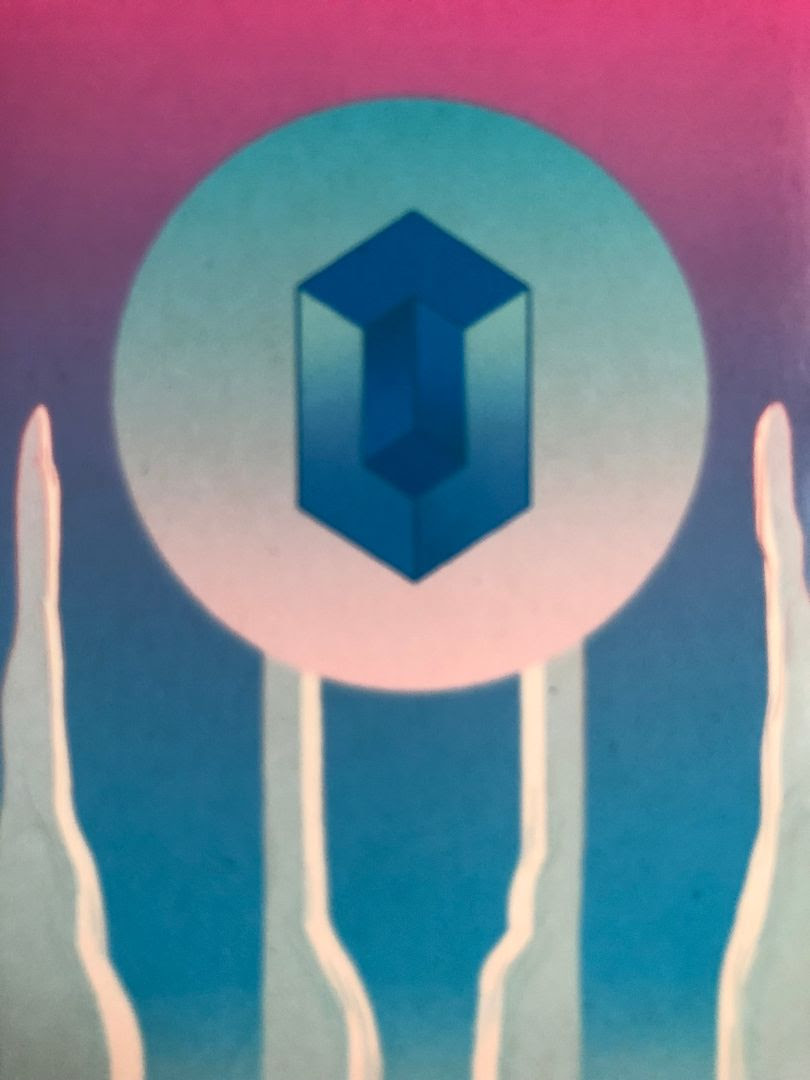 This one starts off slow with these somewhat alien tones coming through in a pattern which makes me feel like a slowed down X-Files song is being played through a vintage record player.    There is a certain air about this and then it kicks into this dance number which could be from the 1980's or 1990's.   It's synths and beats and history has taught me it is vaporwave since it's got that feeling like it's from that era but actually modern.     Sometimes it feels like a ringtone is looping and other times the tones just feel like they're magic.

On what is the third song- "yPop"- there are pianos which turn into these great beeps and it has this bass to it which just twists and turns.   It starts in this certain way and then changes to where it feels like it's uplifting but there is something else happening in here as well, with the way that the other elements impact it.    As it loops and gets faster it feels like a true dance number just because it is impossible not to move to this beat.

As I begin to feel the video game vibes we switch into something a bit more like Yves Malone or Makeup and Vanity Set, where it's these tones that make me feel like they're being played on clouds yet they're delivered in a way which also makes me think of something from the 1990's-- a movie soundtrack or perhaps even something a little bit differently paced than, say, Phil Collins.

Sometimes I feel like there is an alarm to this but it also just flows so smoothly you won't think of it that way as much as you will like the game Pong or something that could be on the soundtrack to "Hackers".    It also has that Doogie Howser feel, those particular types of tones coming through ringing.    The way sharper tones can come through as well make me think of a minimal modem sound, which I didn't think was possible before hearing it here.

As it builds though I begin to feel elements of pop within it.   Still a little like a video game, it has that 8bit sense to it, and it just seems... not so much upbeat in the way that it makes you happy (even though it isn't really downer music either) but in the way that it has energy.    There are a certain feeling of windchimes coming through as well, as the beat increases the pace and you can really hear that influence from my youth, as if someone is saying "Relax, don't do it".

On the flip side we open with these crawling bass synth lines and drum beats.   It's somewhat close to feeling like industrial now.   An overall driving sound makes this song fast paced as well, which continues with the theme of this cassette to the extent that you must really desire to move while listening to it-- "HYPERLIGHT" is not the cassette to listen to if you wish to sit still.    Though "Lost" is a shorter song with twisting whirrs and it can feel slower but it also leads nicely into "Fez" which has that vintage record player feel and picks the pace back up.

More winding with beat drops and this has just this great electronic feel to it overall which could quite possibly be best represented in the song "Wavves".    It also breaks down into this dub/reggae type of keyboard sound which I've always really enjoyed hearing and think needs to be in more songs, but at the same time a lot of artists don't use it properly and so I prefer when it is used sparingly, as with boycalledcrow, who utilizes it most excellently.

With more of those X-Files types of tones, this builds up a pretty good alien/space-like experience by the end and as we go into "CloudHEAD pt. 2" (of which the first opened up the cassette) the beat and everything else just picks up once again, showing "HYPERLIGHT" will not go out calmly but rather with a fight, with that same energy on the rest of the cassette which should have you listening to this one as often as possible. 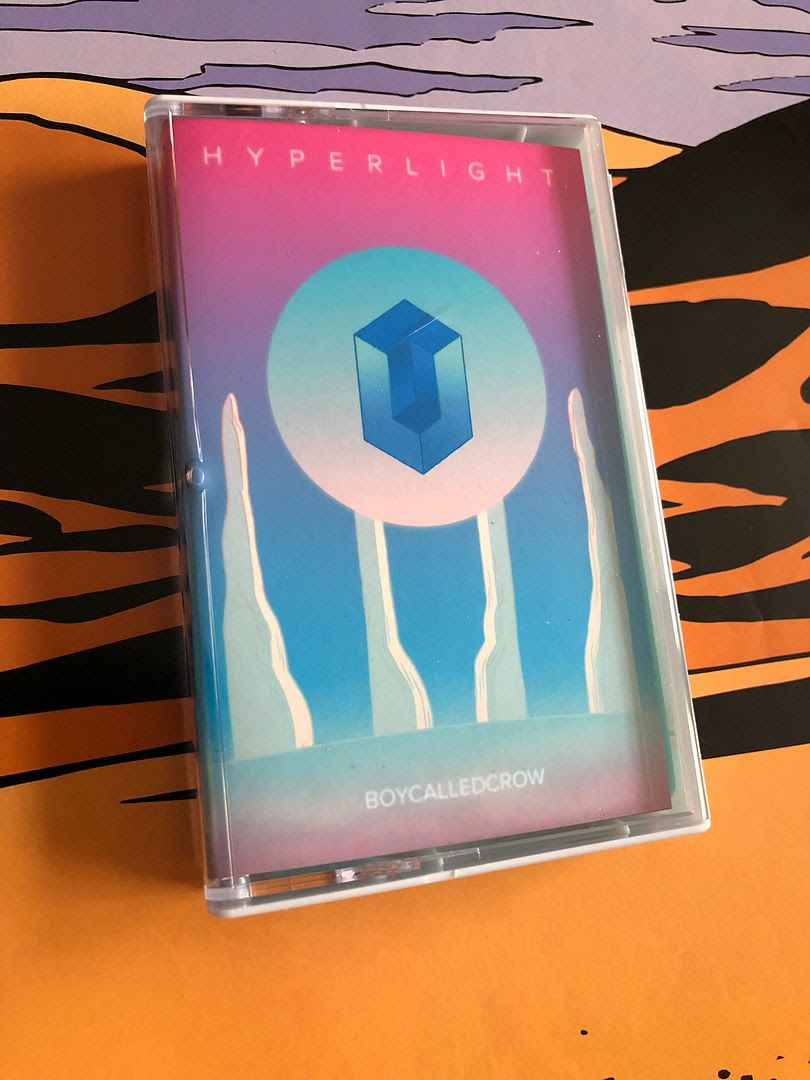 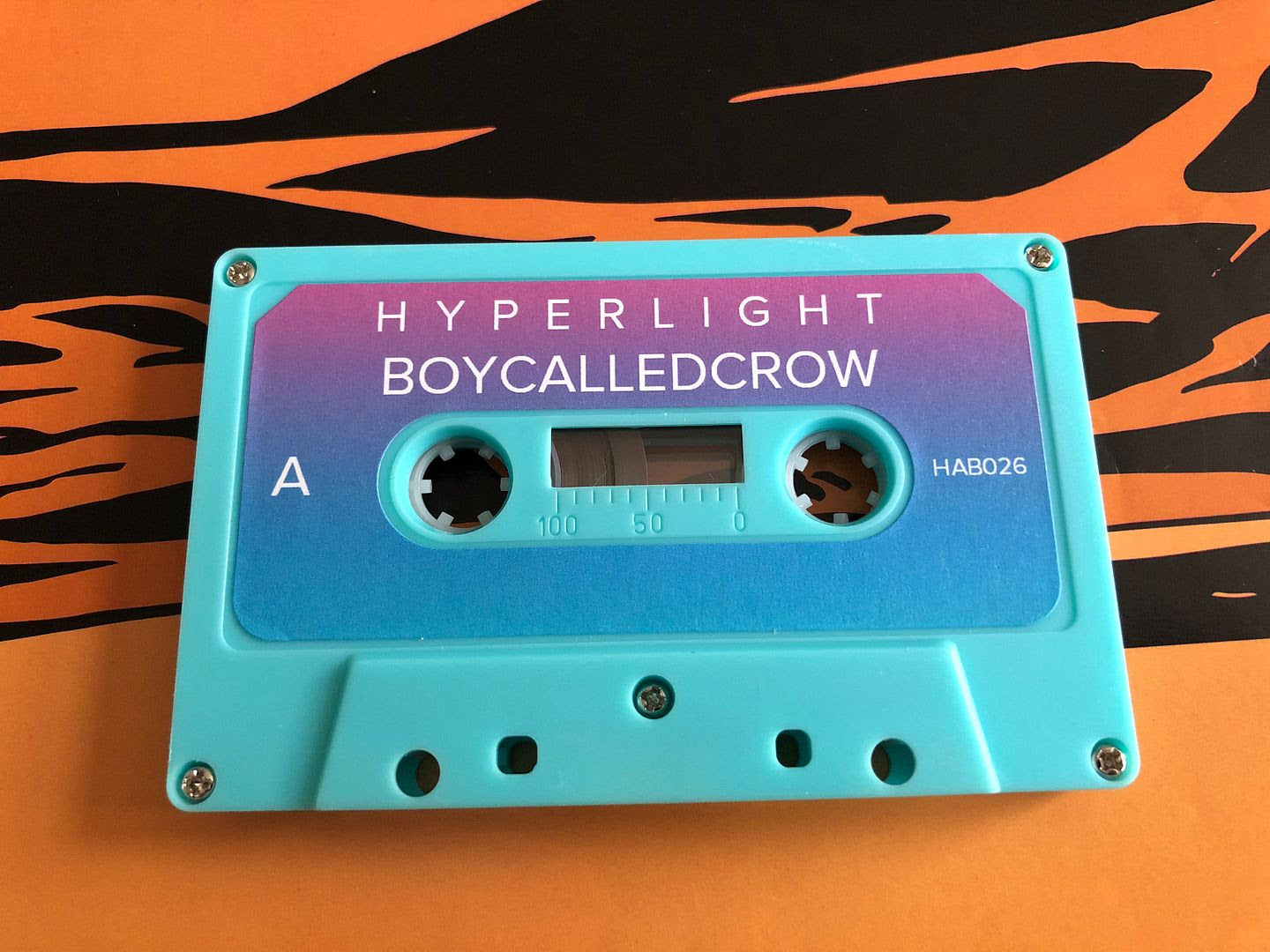 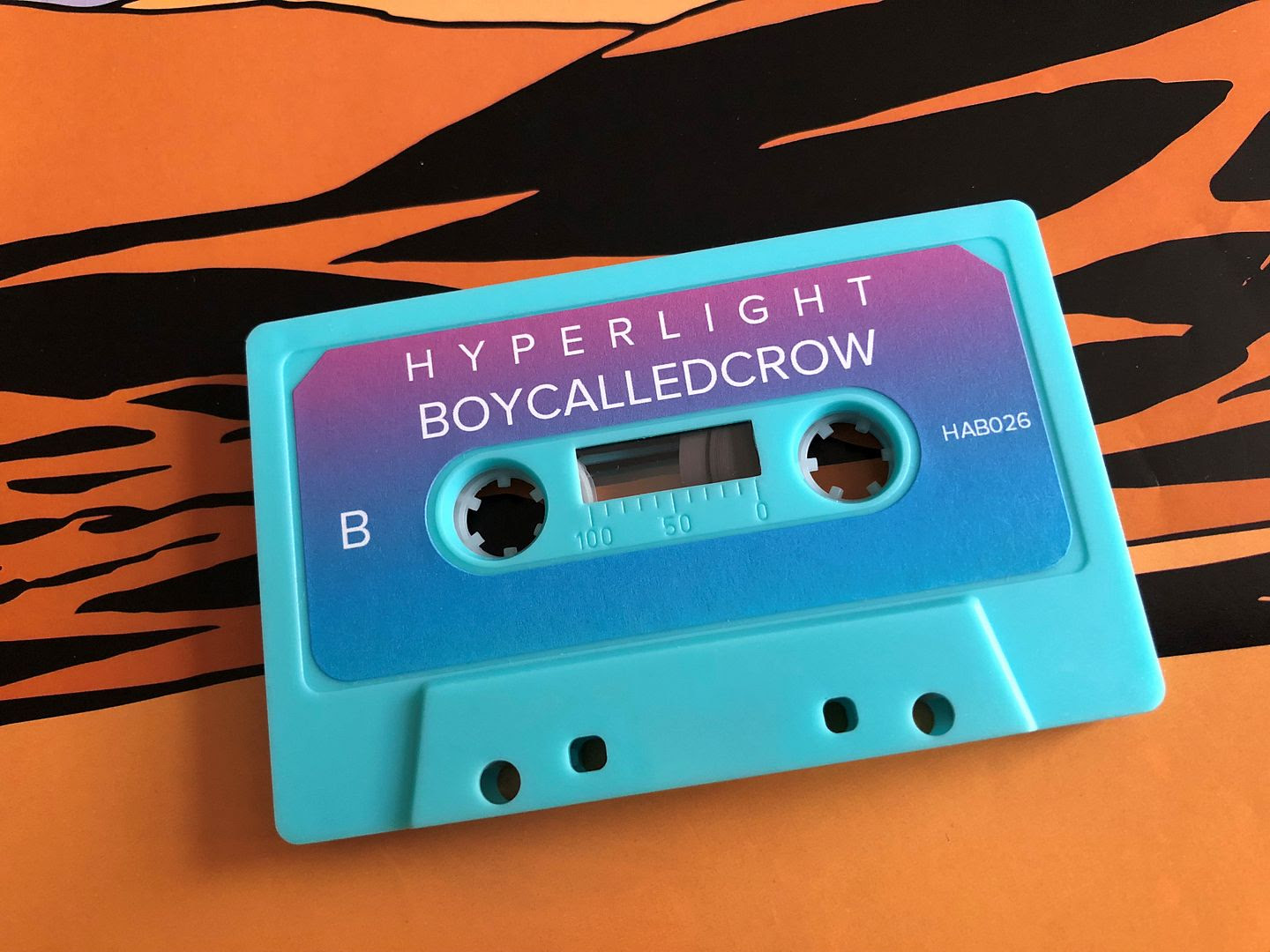 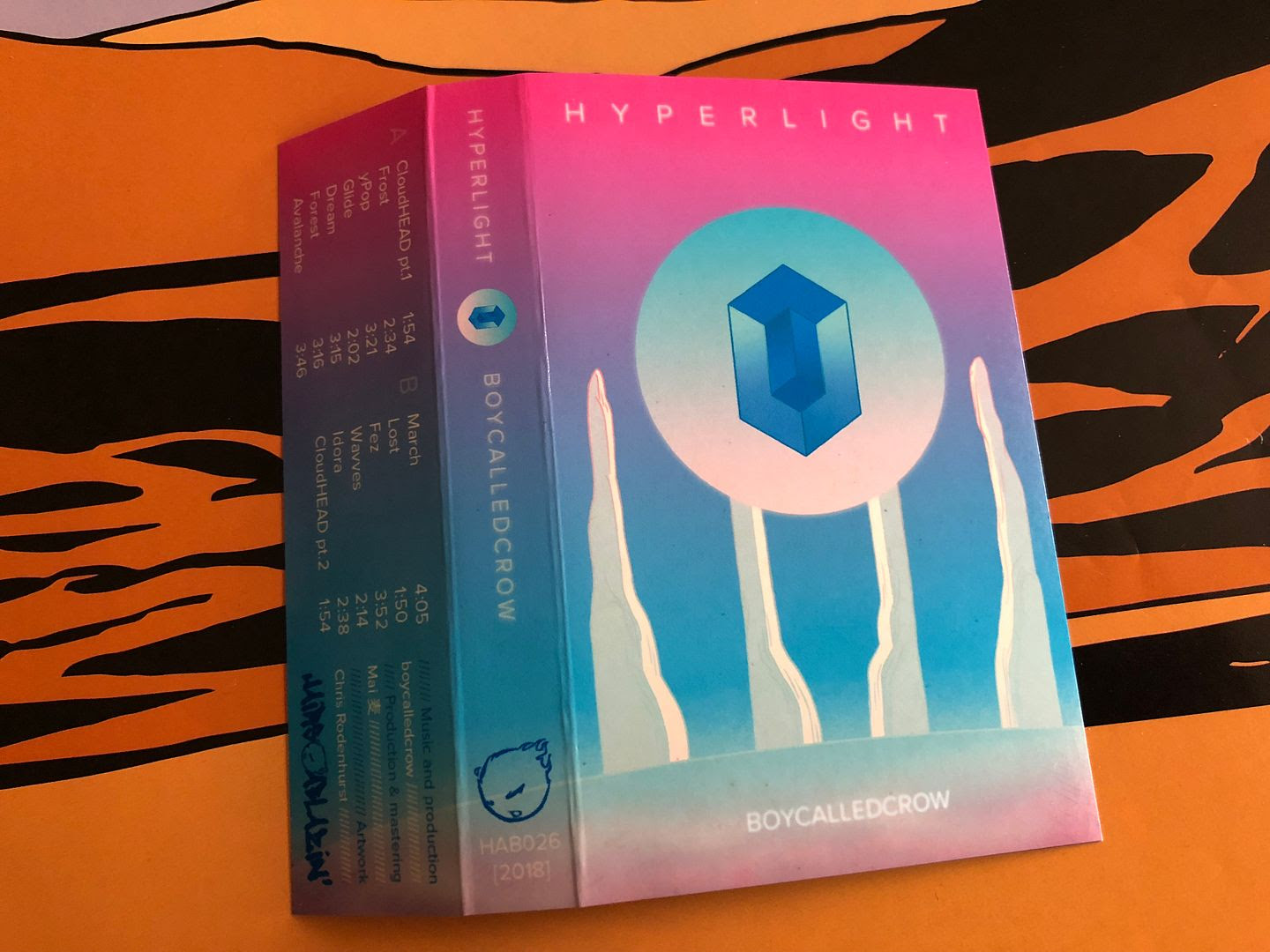 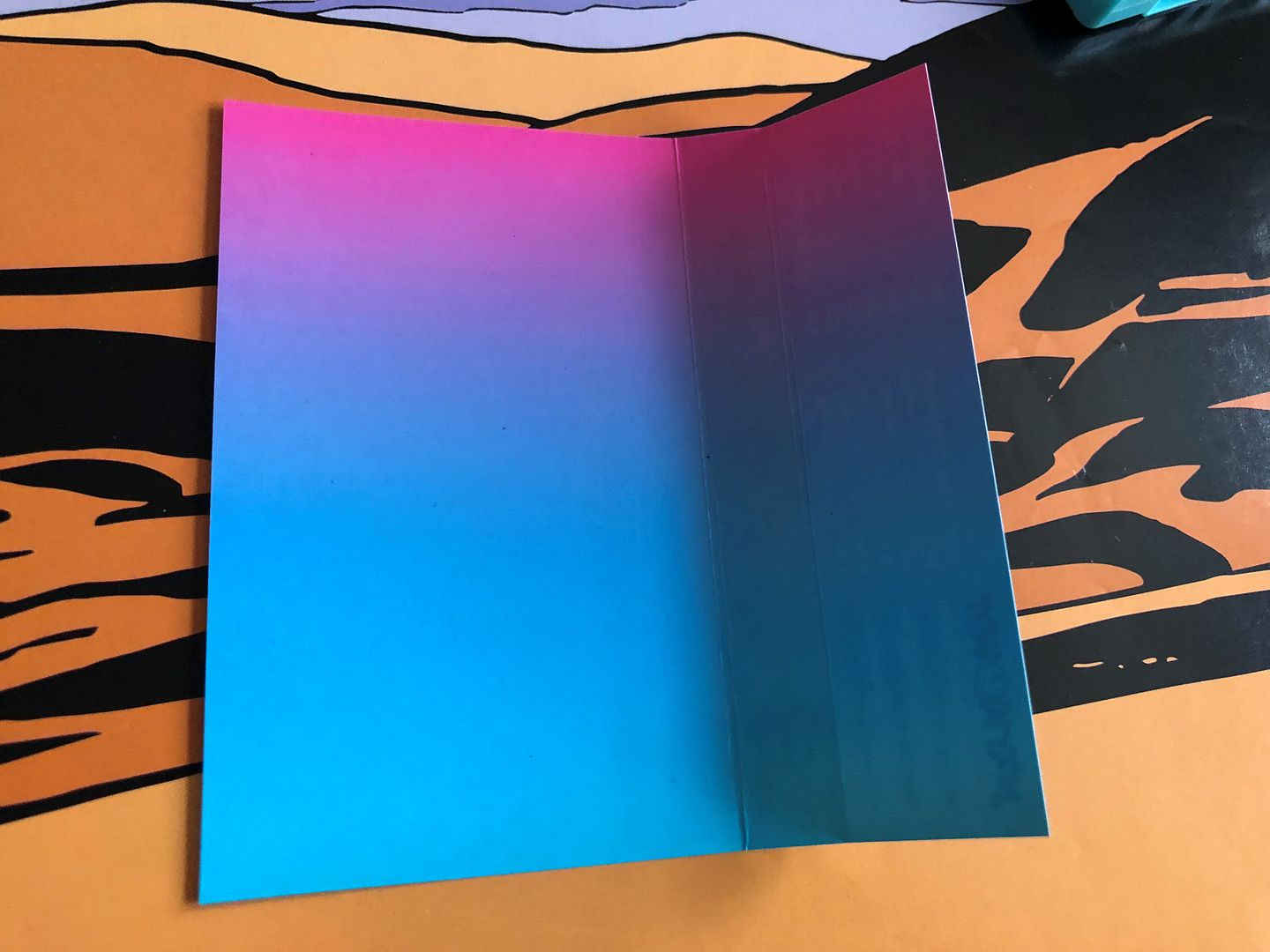 Posted by Joshua Macala at 2:41 PM