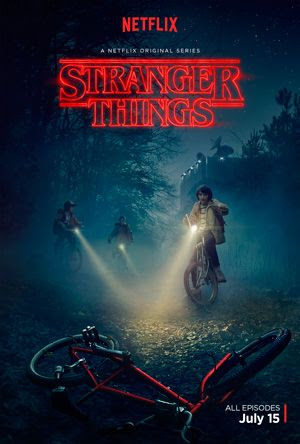 I wasn't sure what to expect from this show when I first started watching it because I only really knew it was new to Netflix and eight episodes long.    A lot of my regular shows had ended for the summer and so I had the time to watch it and figured I'd give it a go.    After the first episode though I just wasn't sure whether or not I wanted to stick with it.   The vibe is one of the 1980's-- things like "E.T.", "Stand By Me" and of course "The Goonies" and rather than finding itself in that time it felt like more of an homage to it, meaning it lacked a certain substance (see: "Super 8")

At times I will admit that series felt predictable (especially in the end) but it was still something which I watched until the end and so you have to give it credit for that because there are series on Netflix which I'll watch maybe an episode or two (or less) of and then decide it isn't worth my time.    The characters are interesting and the strange things happening make me want to come back and watch more especially as it seems to leave options open for a second season.

The character of Winona Ryder is great in this and it's always fun to see the actors I remember as a kid growing up playing such younger roles playing the parents and stuff now, as it feels like actors grew up with us.   Ryder just has perhaps the strongest character of anyone on the show as she refuses to believe that her son is dead.

Oh yeah, so, spoilers: Will goes missing and a body washes up that is supposedly his and so he is thought to be dead.   However, one of Will's friends meets this girl named Eleven (don't ask) and she says she knows where Will is and that he's in the Upside Down.   It might sound like a bit much but the thing is, it reminds me of "12 Monkeys" in the sense that sometimes you want to believe Will is really out there and still alive while other times you want to just believe that Eleven came from a mental hospital and Will's Mom (played by Winona Ryder) has just gone batcrap crazy with grief after the loss of her son.

There are other kids (Will has a brother and he seems to get his own storyline) and non-kids (the sheriff guy has a daughter who died not that long ago so he's kind of going through the same thing all over again) and so it's not just a matter of there being one story from Point A to Point B but rather a number of different plots floating around all at once which both wrap up nicely by the end but at the same time don't.   Yes, I was unsure of this show when I first started watching it but now I'd watch Season One again with Gina and am eagerly awaiting the second season.