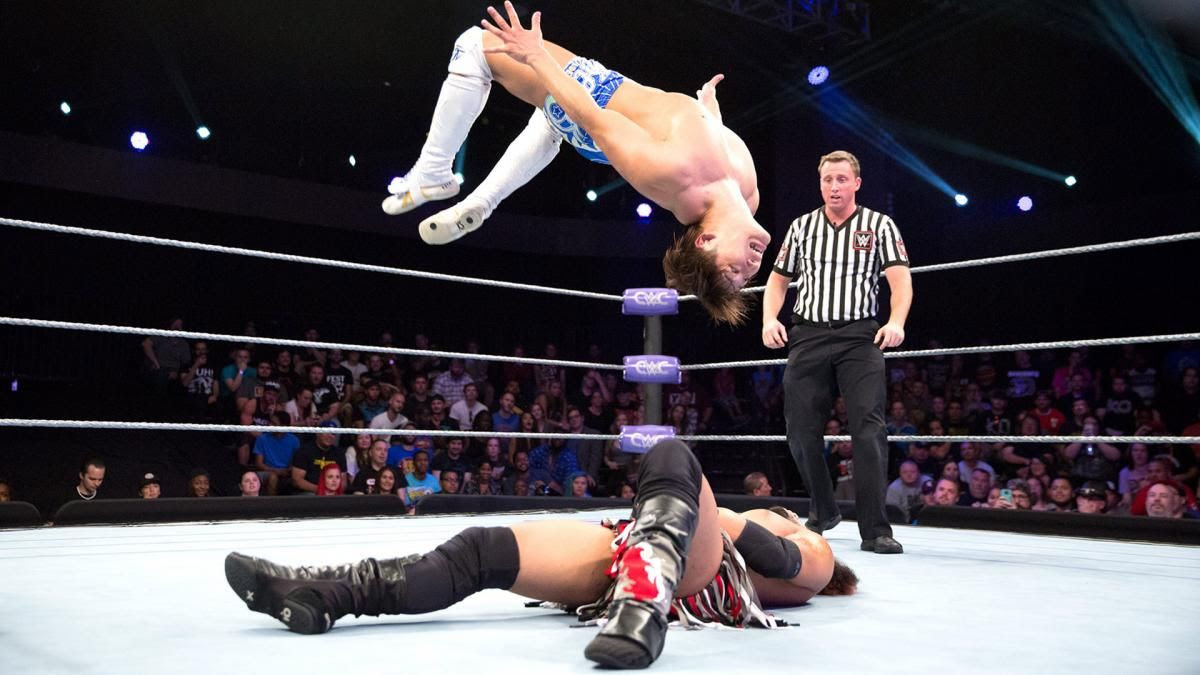 Official results can be found via WWE.com by clicking here.


The Cruiserweight Classic opened with a nice video package, Daniel Bryan and Mauro Ranallo on commentary and a ref who asks the wrestlers if they are clear with the rules before the match and an in ring arm raise after the match.   It's a lot like MMA in the before and after part, but let's get to the fighting because I did enjoy three of these four matches oh-so-much.

This was a great match to kick off the CWC and even if this doesn't become a yearly tradition (which I think it should), there will always be the fact that these were the first two competitors involved in the very first match.   Take nothing away from Alejandro Saez, as he has great facial expressions and just this in ring presence you cannot teach.  To put him under the guidance of William Regal is something WWE should be strongly considering right about now.    Even though Gran Metalik won this match, Alejandro Saez hit a great looking shooting star press from the ring apron onto Gran Metalik.   But I can appreciate the idea that Gran Metalik is in this tournament representing Mexico and all that so they have to let at least one luchador advance here.   Still, nothing should be taken away from either competitor in this match and it was just such a great start to this show.

Ariya Daivari is the younger brother of the former Muhammad Hassan friend/guy who was briefly a rich dude in Lucha Underground and has since disappeared.   Could WWE bring the Daivari Bros in as a tag team?  That could be fun!   Ariya was the first competitor to not do the handshake before the match.  Sadface.   This felt like a short match and I feel like HoHo Lun could do more than just what we saw in this match.   HoHo Lun was one of the first announced competitors in this tournament and I expect him to go far.   A great job was done explaining how HoHo Lun had to go to other countries to learn professional wrestling and then he opened the first promotion in Hong Kong.   If he doesn't have that sense of not being able to leave his home promotion or whatever I'd love to see HoHo Lun stick around in NXT.   Ariya Daivari I could either take or leave.   As I mentioned first, he might work in a tag team with his brother but otherwise I just don't see him as being someone I really want to see more of in life in general.

I'm still not completely sold on Cedric Alexander- no matter how much I see of him in EVOLVE and beyond- but he was being booked in this match as a guy who gave up a contract with Ring of Honor to be in this tournament while Clement Petiot was billed as a heel from Lance Storm's school who refused to do the flippy-doos that you tend to think of cruiserweights doing.   So, Clement Petiot is the anti-cruiserweight but not quite "The Bruiserweight" Pete Dunne- while Cedric Alexander is someone out there's golden boy.   I think after all this is said and done, Cedric Alexander could end up with a WWE contract because they need to replenish NXT and all that, but really, if they brought in Clement Petiot as a heel it might also do them some good.  At first, I wasn't really sold on Petiot as a character because he has this Rene Dupree thing going on, but if you book him as the anti-cruiserweight in the cruiserweight division... Plus, he looks ripped enough to hang with some of the bigger guys anyway, so I could see some interest in him after this match and Petiot opening some eyes.   I just wish I could say the same about Cedric Alexander instead of my usual "Well, he has next time to win me over!"

This was perhaps my favorite match of the night.   Anyone who has followed the career of Kota Ibushi knew he was not going to lose this match because Ibushi could easily win this whole tournament.   I mean, the way the brackets are I'm still betting/hoping for a Ibushi-ZSJ finals if someone like Drew Gulak or TJP doesn't play spoiler.  (Or Johnny Gargano for that matter)    Still, this was an impressive showing from Sean Maluta who has that look of The Usos but can seemingly go in the ring a bit better than them.   On one hand, I'm just so tired of The Usos when it comes to WWE and yet at the same time, I feel like Sean Maluta could thrive in WWE.    If AJ Styles, Doc Gallows and Karl Anderson were looking to expand The Club they might want to call upon Sean Maluta.   I could see that working for some reason.   Still, this was one of the better matches under the WWE banner this year and just a shining example as to why you should be watching the CWC right now.


So as of right now we have Gran Metalik, HoHo Lun, Cedric Alexander and Kota Ibushi advancing to the second round of sixteen- or as I will now refer to it "The Sweet Sixteen".    This is when the eliminations are going to start getting tough as for this show I could kind of tell who would win and who wouldn't based upon how WWE has promoted them before the CWC began.    Any of these four guys have the potential to win this thing though, so adding their names to the Sweet Sixteen just makes it all that much more exciting and we get to add four more names (I'm assuming) next week.


Following this episode- the first episode- of the CWC it was revealed via PWTorch that WWE had offered contracts to both Kota Ibushi and Gran Metalik, who both accepted them.   There are several other names mentioned in the article who WWE might propose contracts to, but the signings of Ibushi and Gran Metalik for WWE is definitely huge and should improve the void I expect NXT to have after the draft.    Also, these are two of the best in the world at what they do and as such they can only help the overall state of WWE.   I am just beyond excited right now.

Posted by Joshua Macala at 9:20 AM