On our way home from our first ever Danbury Westerners baseball game we were looking for a place to stop for drinks and snacks and we found Walgreens.   Walgreens had been kind to us recently with Elite Series 41 but only in the way that we saw everyone from that series there except for Lita and Finn Balor, Finn Balor being the one we really wanted most.   At this Walgreens in Danbury though we found Kalisto and depending upon whether or not we start an Elite New Day collection he is really the only figure we are looking for in this set other than Neville and so we're halfway there.

I was surprised by how much effort Mattel put into the Basic Kalisto figure and the Elite has that same level of detail only with the extra articulation added.   I like his black and pink color scheme as well, but you know, Kalisto is becoming like Sin Cara to me in the sense that I might end up buying all of his figures in various colors because of how much I like him.    If you do a google search for "WWE Kalisto" and look at the images though, you will find this Kalisto with a matching Sin Cara so I wonder if that is ever planning on being released.

This figure was likely planned before Kalisto was the United States Champion which is why it doesn't come with that title belt, but I wish it came with something more than the display stand which makes him look like he's flying.   Oh well.   He has a face mask which mostly goes over his mouth and that's a nice touch to this figure.   I especially like putting that mask on other figures in a sort of fun way, even though it can be appear too large for unmasked men like Shelton Benjamin.

There isn't a whole lot that can be said about this Kalisto figure which wasn't either said about his first figure or that you can't tell just by looking at it.    Ultimately, Quentin might just play with the Basic Kalisto and we might display this one with his flying stand thing, but either way, I was planning on getting this Kalisto and not his Basic one, but since we could didn't plan on finding the Basic Kalisto in stores and we did now we have two Kalisto figures and I'm fine with that.   This figure was also recently sold out on Ringside Collectible when the Neville from the same series was on sale for $17.99 so worst case scenario we might just buy Neville online and wait for Elite 43. 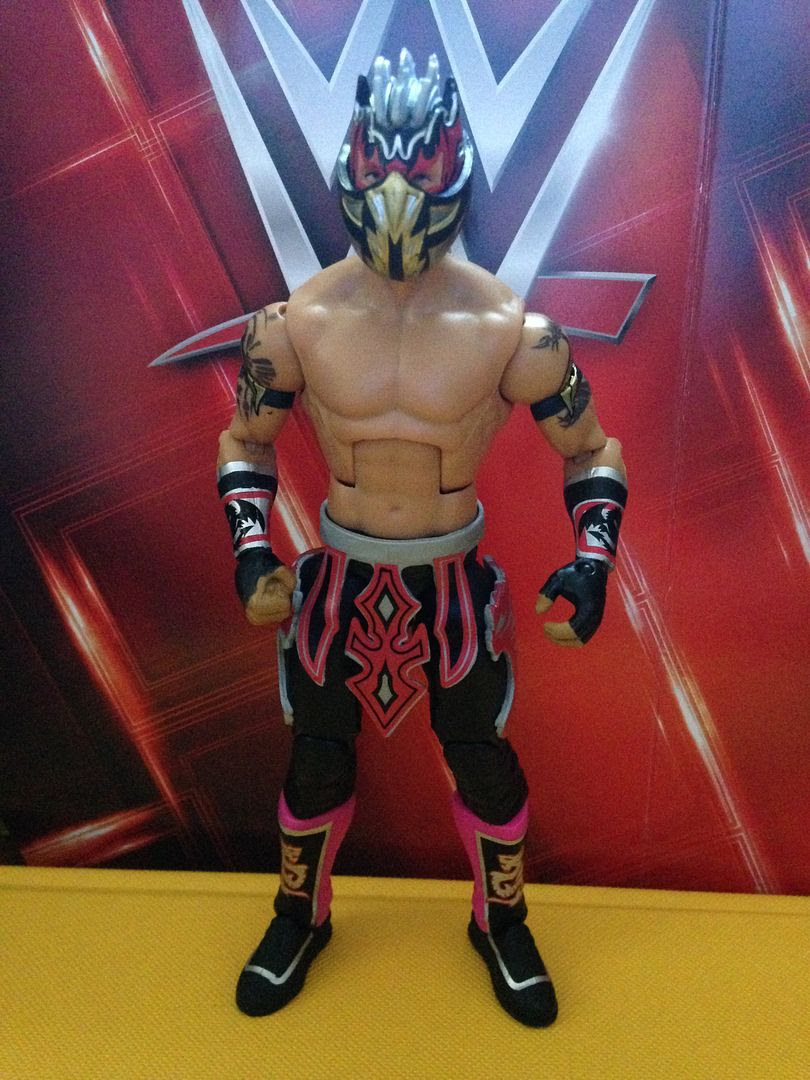 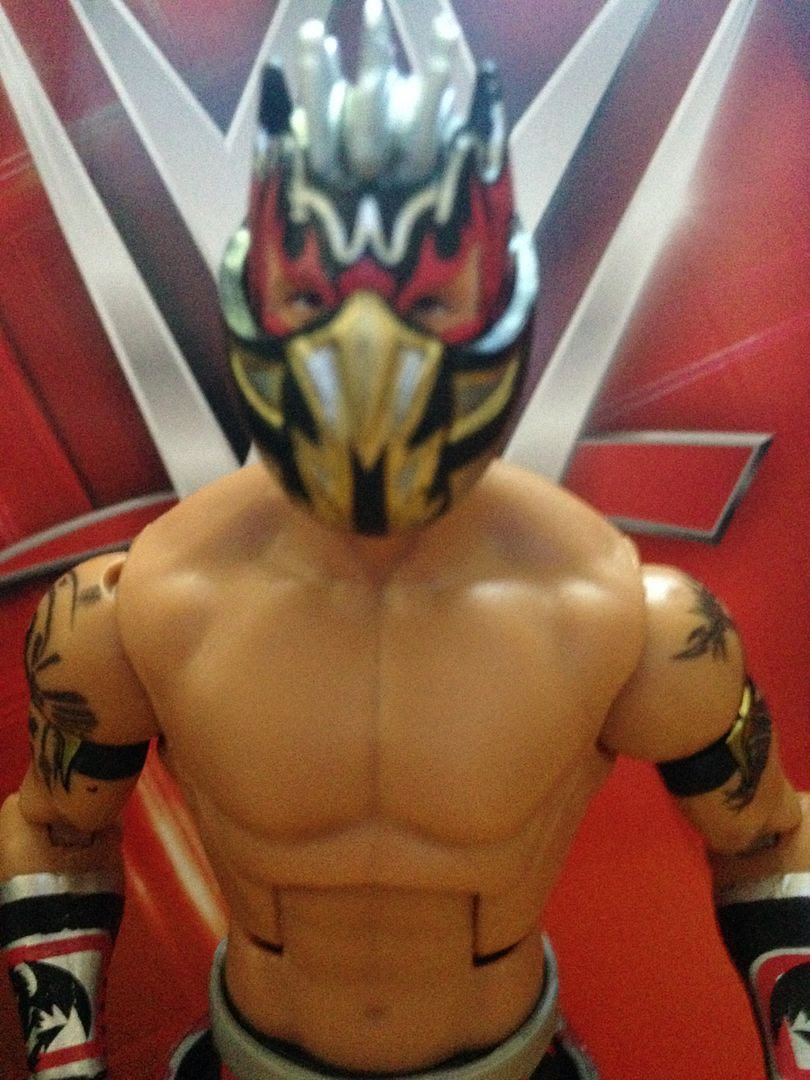 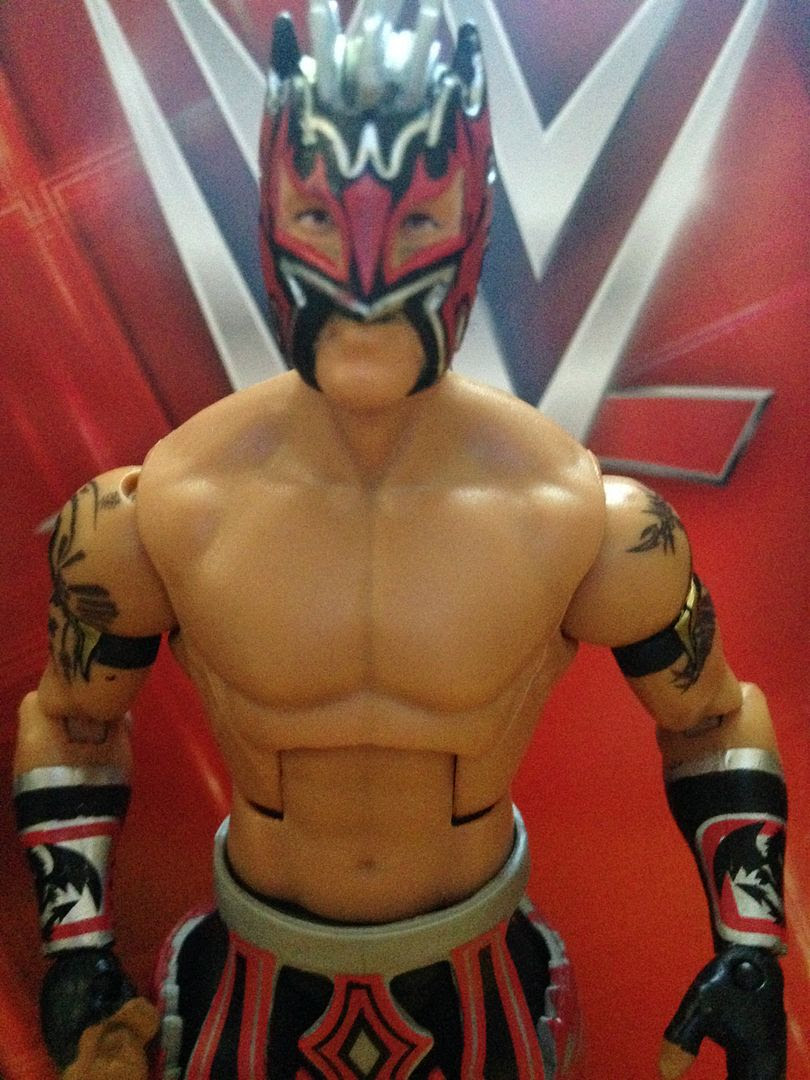 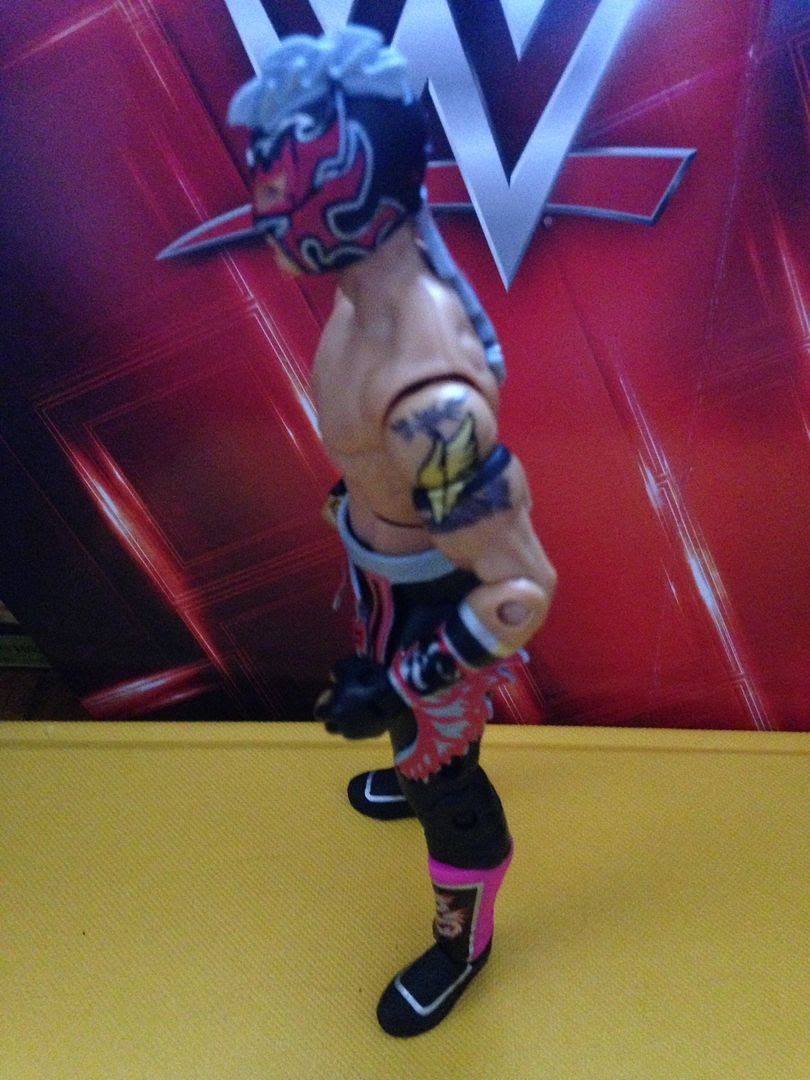 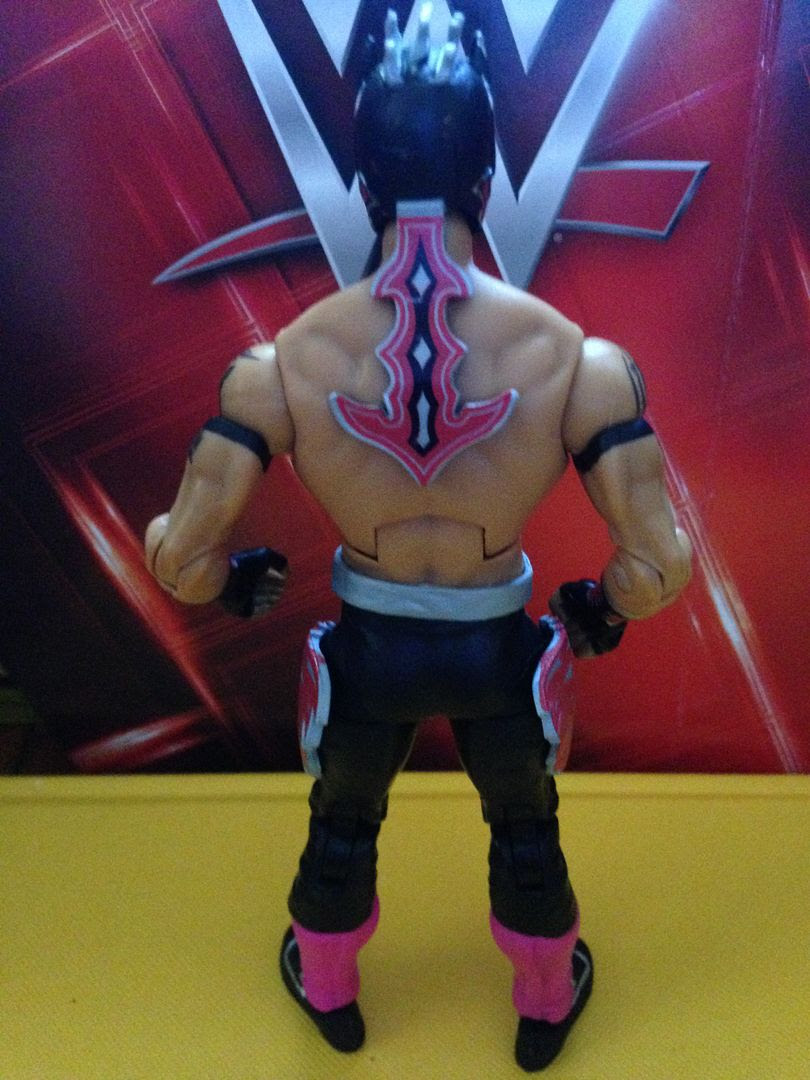 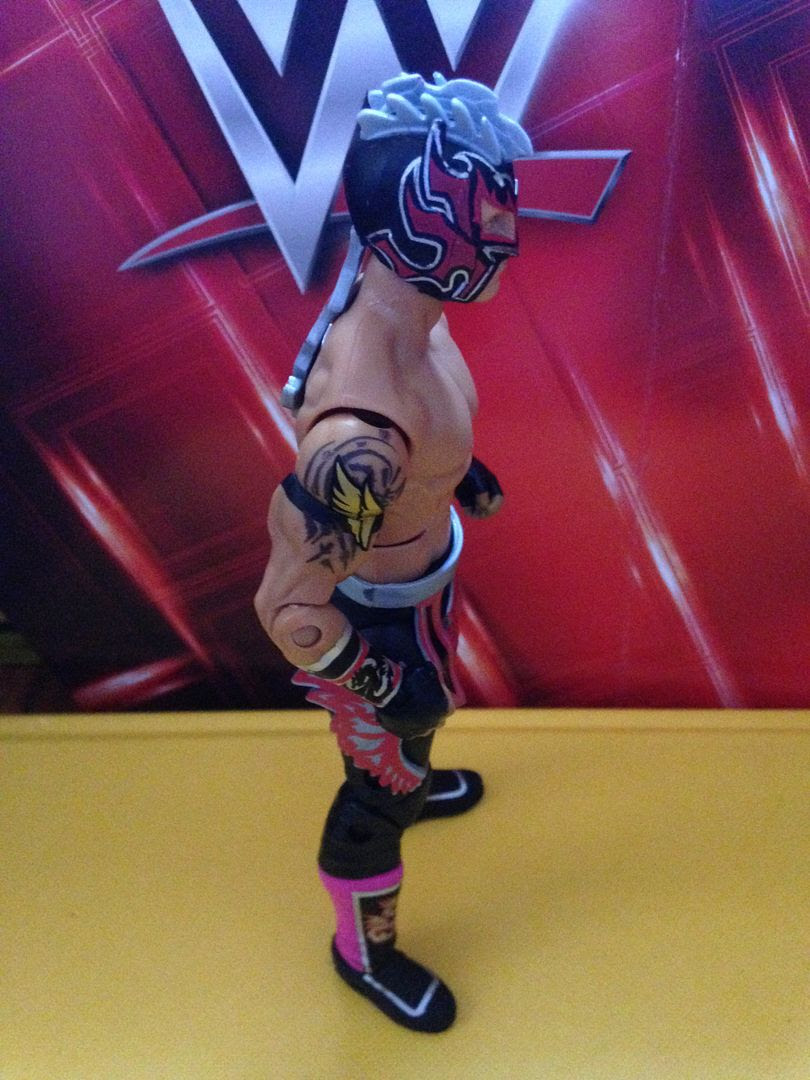 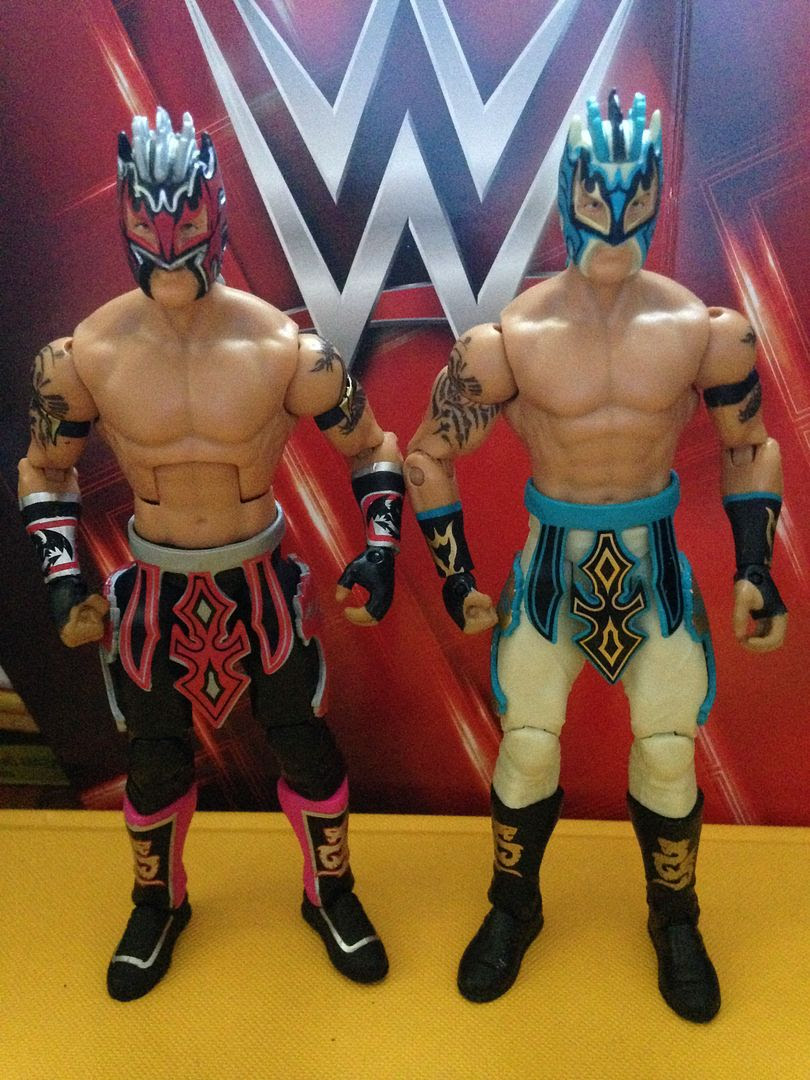