Professional Wrestling Review: Ring of Honor Best In The World 2016 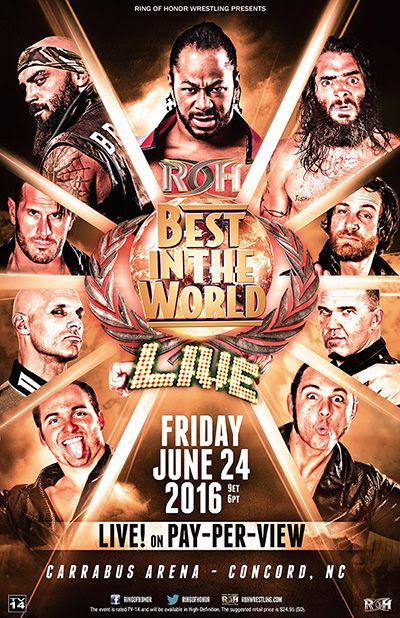 So the last time we saw Ring of Honor on PPV, Jay Lethal and Colt Cabana were both beaten down by The Bullet Club and their newest member- Adam Cole.   The match ended in a no contest, but what happened to Colt Cabana since then?  Did ROH really call Colt Cabana, ask him to come back for one match that wouldn't have a finish and that was it?  Shouldn't the main event of Best In The World be some sort of cage match between Jay Lethal and Colt Cabana for the ROH Title?   Oh well.  It could be worse.  Jay Lethal could be defending against Dijak.

Kyle O'Reilly was in the opening match of the show against Kamaitachi.   Does anyone else remember when reDragon was a thing?  I miss them already, but the idea of them fighting each other for the title one day also appeals to me somehow.    This was actually a really good match with pinfalls into submissions and these two did just about everything you'd want to see in a professional wrestling match.   O'Reilly won via submission (arm bar) and somehow based upon the card tonight I feel like this match might have just stolen the show.   I am also pretty sure that Kevin Kelly says this means O'Reilly gets a title shot against either Jay Briscoe or Jay Lethal.   Hmm.   Kamaitachi didn't live up to the code of honor after the match and his heel turn will continue as O'Reilly kind of looked like a chump.


The second match was ACH vs. Silas Young.   This match was brought about because Silas Young wants ACH to be a man and that means not watching cartoons and reading comic books, as ACH likes to come out paying tribute to One Piece.    Silas Young started right off by telling ACH this wasn't a video game or "your stupid Japanese cartoon"-- it's real life.   Funny.   So here's my problem with this match in terms of storylines.   ACH says you should just be yourself.   Silas Young says you should be a real man.   But if Silas Young is the last real man in professional wrestling then isn't he just being himself?  So ACH shouldn't really have a problem with him, and yet here we are, having this match for some reason.     Silas Young has this older method to his fighting style while ACH is a high-flying flippy dude.   Couldn't they have just made this feud about the old school vs. new school styles of wrestling?  You know, like how Vader hates these types of things which ACH does, only maybe ROH could have did it before Vader on Twitter.     This was about what could be expected from it.   Imagine if there was an ROH video game and you could let these two play against each other on the "computer" setting.    ACH won but I doubt Silas Young will give him the props he deserves still.

Moose & War Machine vs. Bullet Club is such a waste of space on this PPV card, especially when Adam Cole and The Young Bucks are representing Bullet Club.   Couldn't this have just been an ROH TV main event at some point?   This match has no place on here and I refuse to comment on it.   Next!

The tag team championship match ended with The Addiction retaining which always makes me wonder things like why Chris Sabin came to ROH with The Addiction then turned on them to rejoin Alex Shelley as the Motor City Machine Guns and now the MCMG seemingly have all been put back together in this scenario for no good reason as they didn't get the titles here.   Oh well.   Like most of this PPV after the first match, this match was neither great nor terrible just meh.

Steve Corino vs. BJ Whitmer took place in a fight without honor.   Steve Corino dressed in all white like Waylon Mercy or Mordecai and this was only done to show the blood on his clothes I believe.   It was so obvious he dyed his hair blonde.   Anyway, the lights went out during this one and Kevin Sullivan cost Steve Corino the match.   Yes, *that* Kevin Sullivan.   On an ROH PPV.   In 2016.    I can't believe there are people out who are happy to see Kevin Sullivan in ROH.   His fans seem to be more likely to watch him in TNA.   It's not that ROH fans wouldn't know who he is, it's that I just don't feel like ROH fans would really care about him as much as they're probably paying him.    Unless he's rebuilding the Dungeon of Doom to feud with War Machine then I don't want to see it and I don't even really want to see that.   Am I giving them horrible ideas?  I hope not.   Can we just pretend like Kevin Sullivan being in ROH never happened??

Bobby Fish successfully defended his TV Title against Dalton Castle but I really wish Dalton Castle won.    After the match we got treated to a All Night Express promo about making wrestling great again and I feel like this was just done so the crowd could leave their seats for whatever reason.    It was like a commercial break on a PPV which just felt out of place.

In the main event Jay Lethal successfully defended the ROH World Title against Jay Briscoe in the match that, really, Lethal and Colt Cabana should have had.    This would have actually been much more exciting with Colt Cabana in place of Jay Briscoe because the attempted pinfalls would have seemingly mattered more.   I'm not saying that ROH wouldn't put the belt back on Jay Briscoe, I'm simply saying that Jay Briscoe winning the belt back is not something I'd like to see at this point in time and as such I was kind of expecting Jay Lethal to win in this battle of "who really cares".   ROH needs a really strong, upcoming star to dethrone Jay Lethal as champion and that isn't Jay Briscoe.    Either half of reDragon, Dalton Castle or Naito if they could work something out with New Japan would be my best bets to put the title on after Jay Lethal.

So this PPV didn't look that great on paper and the matches played out about how you would expect them to play out.   It's one of those situations-- and I rarely say this-- where I feel like you could read the results and save yourself the time of actually watching it.    There was a WWE PPV earlier this year I believe where we were busy on a Sunday night so we decided we were going to watch it the next day.   But after reading the results and reactions we decided to just skip it.   This might not be as bad as that, but if you're not a huge fan of ROH then I wouldn't bother watching this except for maybe the first match.    And it's sad really that last time ROH was on PPV it wasn't really great either.   Best In The World is only slightly better than Global Wars, but that's not saying much.

Posted by Joshua Macala at 8:48 AM