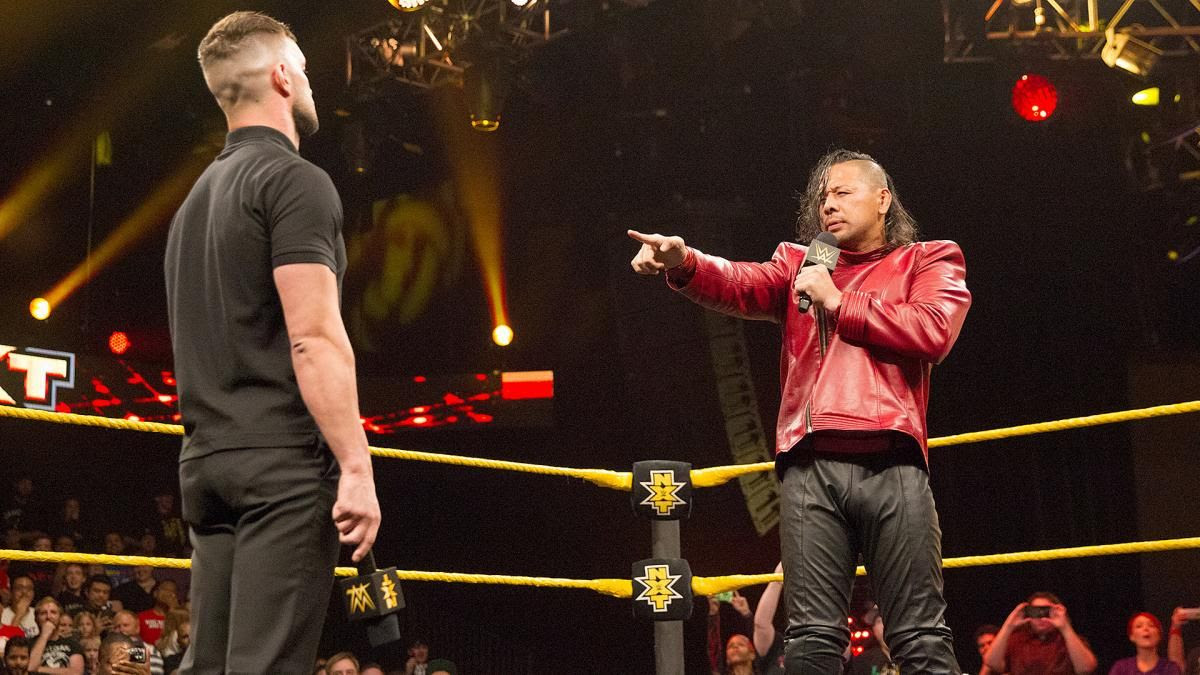 We started our wrestling for this week with Raw but all I can think of is whether or not I want to actually watch Impact this week (whether or not I'll have time) and when I will find time to watch EVOLVE 63.    It feels these days like there is this overwhelming amount of professional wrestling to watch (That Kurt Angle vs. ZSJ match is out there) and not enough time to watch it in, and yet we begin our week with Raw because why not.    (I'm not sure whether EVOLVE 62 or when I watch it EVOLVE 63 will get proper reviews still.  Some wrestling I just have to watch but cannot find the time to write about, sadly)

Raw opened with New Day, which brought out Enzo & Cass, then the Vaudevillains and then finally The Club.   They set up a four on four match with the heels together and the faces together minus Xavier Woods.   If WWE ever makes a four person tag team championship New Day + Enzo & Cass should win it.   However, the team of Gallows, Anderson and the Vaudevillains won this match because Gallows & Anderson are out for the tag titles.    MITB is this Sunday (eek!) so I don't know if I'm going to get my predictions out or not, but yeah, this is definitely a go-home show.

According to WWE.com, Rusev attacked Titus O'Neil but I'm pretty sure the Hulu replay cut that out.   Oh well.   Roman Reigns and Seth Rollins were guests on The Ambrose Asylum, which was rather forgettable for all they've been hyping about The Shield reunion sort of deal.  With Natalya and Becky Lynch on commentary, Paige defeated Charlotte.   They announced a tag match for MITB with Charlotte and Dana Brooke vs. Natalya and Becky Lynch, but doesn't this put Paige in line for a title shot?   Also, poor Becky Lynch.   First she was the sidekick of Sasha Banks and now she is the sidekick of Natalya.   After the match, backstage, Charlotte kind of sort of turned on Dana Brooke but not fully.

Sheamus vs. Zack Ryder was not on the Hulu replay but Sami Zayn's win over Cesaro was.   Sami Zayn winning on Raw means he won't be grabbing that briefcase.    Also, these two guys had a wonderful match in what was one of the first NXT events I ever saw and Michael Cole had to fumble over it saying things like, "These two had a great match everyone was talking about and they called it match of the year a year or two ago".   If everyone is talking about it and it's a MOTY contender, then really, Michael, you should know when it was from more specifically than guessing like someone who is trying to fit in with the cool wrestling fans but only ever watches Smack Down! because it's taped and is therefore "safe".

John Cena and AJ Styles had a contract signing.   Kevin Owens and Alberto Del Rio defeated the Lucha Dragons because the stipulation was that if they lost the Lucha Dragons would replace them in the MITB match and we all knew that wasn't going to happen.   And in the main event Dean Ambrose defeated Chris Jericho in what was thankfully not an Asylum match.


We missed a week of ROH TV so we went straight into the 6/15/16 show and we may or may not go back and make up the previous week missed show depending upon time.   I read the line up for it and other than Colt Cabana it doesn't really interest me *that* much, so it might just be moving forward.    We started with the show which opened with Moose vs. Naito.     This was a funny match because ROH seems to want to build up Moose, but yet he's rumored to be going to WWE when his contract is up soon so who knows what's going on here but I'm just happy to see Naito.     Naito wins and since he is the champ over in New Japan it only seems fitting.

All Night Express has an awkward promo backstage saying they want to "Make Wrestling Great Again".   Great.   All they need is Al Snow as their manager.   Seriously, is anyone not trying to capitolize on this whole Donald Trump slogan??

ANE then went on to defeat the team of ThunderBurger.   Does anyone else remember when Jushin Liger had that one match in NXT against Tyler Breeze?  I feel like ThunderBurger could be a tag team WWE is interested in signing.

Best in the World is on Friday, June 24th, and I'll be at a baseball game but will catch it eventually.   That seems like a good enough reason not to watch the episode of ROH TV I missed and maybe even skip the new one coming next week.   The card looks decent enough on paper as well, so there's that.    Sometimes I feel like I should stop writing about the weekly shows and stick with only the PPVs/big events.

Mark Briscoe was on commentary and Roderick Strong came out to build to their match at BITW.   It was also shown that Jay Lethal will be defending the ROH Title against Jay Briscoe at BITW and one must wonder why Colt Cabana isn't getting a rematch since he didn't lose in his match at the last ROH PPV.   Oh well.

Silas Young came down and was taken out by ACH.    Does anyone else remember when Tomasso Ciampa was in ROH and Nigel McGuinness was very stern about him not putting his hands on officials and all that?   Well, in taking out Young, ACH also took out a few members of ROH Security, while Nigel sat by and did nothing.   Strange.

In the main event, Kyle O'Riley defeated KUSHIDA and it was what Kyle said he was going to do.   I think it's interesting how the NJPW stars played a role in this episode and the ones like Kyle here who aren't up for signing new contracts won their matches while Moose lost.   But either way, Naito losing would have been more of a sin than KUSHIDA taking the fall here.   So who knows what this means for anyone but I might (or might not) watch the next episode of ROH TV if there is time before Best in the World.

It is worth noting that WWE has announced- via their website, rather at random- all of the participants in the CWC.    Word going around is that Amazing Red was to be in the tournament but will not be due to injury, but it will be nice to see Brian Kendrick and Tajiri again.   Of course, I will type more about that as we get closer.   I will preview brackets, take betting odds and likely live Tweet through the events as well.


NXT was next and it opened with the Authors of Pain making their debuts against some local competitors.    This was decent enough for a squash match and Paul Ellering ducking the post match interview was classic.

Carmella defeated Tessa Blanchard next and it is true-- Carmella might soon be the female face of NXT.   I don't know why, but I feel like Asuka might get called up sooner than later and that's not a bad thing.   Asuka vs. Charlotte anyone?   Tessa Blanchard should be exchanging texts with Rachel Ellering right about now.

TM-61 defeated Blake & Murphy, which makes sense since BAMF seem to be breaking up and the former TMDK are on their way up.   This was a pretty standard match, as we have seen tonight.   Nothing too exciting yet in terms of "Who will win?" as it's all playing out rather obviously.

Okay, here we go.   Let me try this.   Andrade "Cien" Almas defeated Tye Dillinger in their rematch from Take Over: The End.   I'm not sure why they had this rematch exactly but I'm guessing it's because Elias Samson is injured and Cien can't get the traditional victory over him.   Oh well.   Cien still has that stupid feather hat and he dresses in all white on his way to the ring like a Mexican Mordecai.    Ugh.  WWE better not mess this up because outside of WWE I was a fan of La Sombra, but right now, it just hasn't clicked with me yet.

In the "main event" Finn Balor seemed to be announcing his departure from NXT when Shinsuke Nakamura came out and said he needs to defeat Balor in order to get a title shot or something.   It was all really well done and, quite honestly, better than most of the matches we've seen on this episode.    Someone in the crowd had a Shinsuke Nakamura bear and I'm so jealous.   Hopefully, one day, WWE will get him the Bleacher Creature.  (Please?)   But this match should be great.   Nakamura already has claim to two spots in my list of favorite matches from this year and this will only likely give him a third spot.

Lucha Underground opened up this week with the Six To Survive Match, which was kind of like picking up where they left off last week.    Mil Muertes returned and beat the crap out of Fenix, so there's that.    Johnny Mundo pinned King Cuerno and eliminated him from the match first.    Johnny Mundo and Taya began working together and they eliminated Ivelisse to bring it down to four.    The duo remained with Pentagon Jr. and Fenix.   Pentagon Jr. eliminated Taya and it was down to three.    Pentagon Jr. and Fenix sort of worked together to eliminate Johnny Mundo.    Pentagon Jr. won and Vampiro seemed genuinely pissed about it.   The Cuetos came out and Pentagon Jr. said he was going to break all their bones.   Should be an interesting match because Pentagon Jr., as champion, would make for a great face of Lucha Underground as he seems to be one of the most popular luchadores on the roster.   This match was the entire show and it didn't feel like it went for that long but oh well.    Let's see if we can squeeze in Impact before Raw comes around again.


We decided to close out our week with Impact because why the hell not.  Apparently, TNA had some issues with their episode of Impact airing semi-live this week though and because of that the episode was just shot to hell.   I mean... I just can't even watch this.   I started it at one point and Josh Mathews said that Jeff Hardy was robbed of the King of the Mountain Title by his brother Matt and I'm just wondering what universe we're in right now.   I'll just wait and try again with next week's episode because this is just not happening right now.
Posted by Joshua Macala at 8:58 AM