This... This is Extreme!! But Still PG - WWE Extreme Rules 2016 Thoughts and Predictions 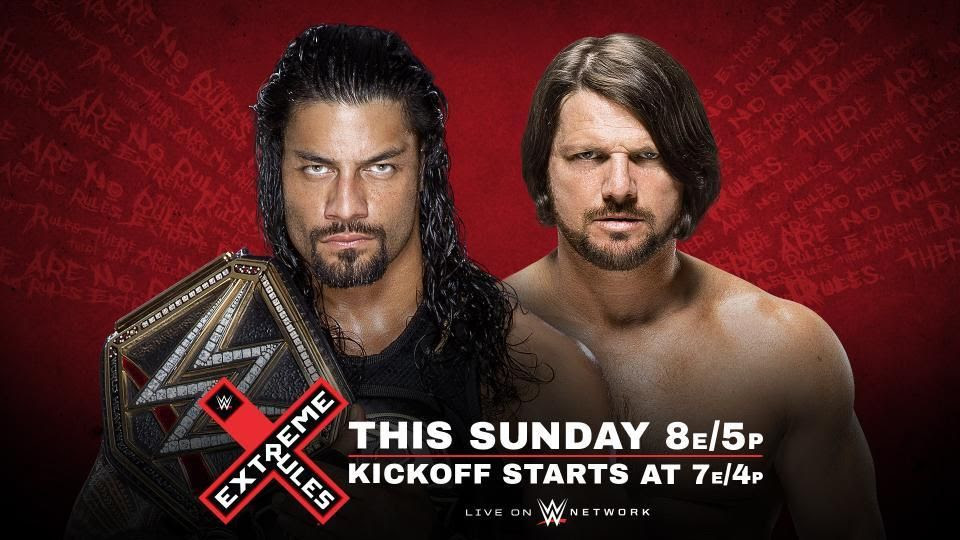 These two have had far too many matches since Baron Corbin has come up to the main roster and they are on the pre-show yet again.   Baron Corbin needs to find a new opponent, so I guess he'll likely just destroy Dolph Ziggler here (since apparently Ziggler is getting the Ryback treatment) and then move onto a new feud or be in the actual Money In The Bank match soon.

Match Two: The Usos vs. Luke Gallows and Karl Anderson

Gallows & Anderson have seemingly fought no one other than The Usos since coming to WWE.   I'm already sick of this feud and don't care who wins this match as long as it pushes Gallows & Anderson away from The Usos and towards the Tag Team Titles picture (which I believe they could have by Summerslam)

So do you escape the cage in this match to win?  Do you put a straightjacket on your opponent to win?  Remember that match when Kane got to wear the straightjacket?  Yeah, I don't know about the rules of this match and I don't really care.   Dean Ambrose already has a PPV win over Chris Jericho and so if Jericho wins this and then they have the rubbermatch I don't know to what it accomplishes exactly.   That is to say, Dean Ambrose could have had his one win over Chris Jericho at the last PPV and been at the same place as he was before Jericho smashed Mitch over his head and in another month we'll probably see Dean Ambrose get the 2-1 victory on Y2J.    This has been a fun feud, sure, but it needs to come to an end.   I'm pulling for Dean Ambrose to win just so we don't have to see another match between these two, but I'm not getting my hopes up.

Match Four: The Miz* vs. Kevin Owens vs. Sami Zayn vs. Cesaro (Fatal 4 Way for the IC Title)

Sami Zayn scored a big pin on Raw, so he won't win here.   Kevin Owens should win but it's likely that Sami Zayn and Cesaro were thrown in this match to get in his way.   It pains me to do so, but with all of the factors in this match I'm going to say The Miz wins and retains.   It will be something like European Uppercut by Cesaro on The Miz, then  Pop Up Powerbomb by Owens on Cesaro, some dumb move by Sami Zayn onto Owens and just when Sami Zayn thinks he is about to pin Kevin Owens and win the IC Title, The Miz breaks it up, Skull Crushing Finale and The Miz retains.

If you scroll ahead or have read anything I've written about WWE recently with regards to the Womens Championship you will know that Charlotte is being built up- in my eyes- as the massive heel so that it just makes that win at Summerslam for Sasha Banks feel that much bigger.    The same can be said for New Day losing the Tag Team Titles and not only can I tell you that it won't happen at Extreme Rules, it likely won't even happen to The Vaudevillains.   I don't really like when WWE pushes new teams (new to the roster) to title shots this fast because then it's a question of where they go after they lose, but that's not my problem because I'm not booking the current hot mess known as WWE.    New Day is going to either lose these titles to Gallows & Anderson or Enzo & Cass, depending upon when Enzo can come back, so not tonight, as much as I love The Vaudevillains.

When Ryback failed to get the job done- twice- Rusev was called in.   It's interesting that WWE chose to go with another big guy opponent for Kalisto and I think that really tells the story here of what will happen in this match.   Kalisto is going to lose the title and Rusev will go back to a monster heel push or hold the title for John Cena when he comes back in a week or so.     Yeah, John Cena defeating Kalisto might confuse the younger viewers, so I'd say that WWE is moving the title to Rusev here as a means of getting it back onto John Cena and then the US Title Open Challenges can continue once again on Raw.

The idea behind this being a submission match is to show that it is the Figure Four vs. The Sharpshooter, but if making your opponent submit is the only way to win this match then what is stopping Ric Flair from interfering other than a silly little rule?   And let's just say that Ric Flair does adhere to his code of conduct and doesn't come out (Maybe someone locks him in a dressing room?), what is to stop Charlotte from enlisting the help of other friends?   With Emma out with a back injury, this almost feels like the perfect opportunity for Dana Brooke to align herself with The Champ.   That might have even been what WWE was going for at one point, with Charlotte sort of being revealed as the true leader of EnD.    Now, plans might change, but I'm sure if Naomi is out with an injury, and I think Tamina is injured as well, someone can be found to join Charlotte and Dana.   I don't know.  I only really see this ending with Natalya being beaten up by more than just Charlotte and then having to submit (or pass out) via the Figure Four.    Remember when Ric Flair gave the Figure Four over to The Miz?  Should The Miz and Charlotte fight now?  Unification match?   But yeah, Charlotte is going to win this one with help (just not Ric Flair) and this feud will then continue to a cage match.   Ultimately, I also see this as being a matter of "If I can't beat you, I'll retire" for Natalya, who seems to be on her way out and this is her final run of sorts, given Tyson Kidd might not come back.

It's been quite a few PPVs since we last saw John Cena and when you would predict PPVs there was always one steadfast rule regarding him: Never bet against John Cena.    In this new era of WWE my plan is to always bet against Roman Reigns.    AJ Styles came as close as one could get to winning the WWE Title at Payback and I still feel like he has something in his contract which states he has to win the title at least once or else he would have just stayed in New Japan.    Could this be his night?  I hope so.   AJ Styles as WWE Champion is a lot better than Roman Reigns.   We could even see Seth Rollins return and cost Reigns the title for all I care (And then they go off and feud)   It's just... Let's get that title off of Reigns and begin the AJ Styles era.    Especially since Gallows & Anderson should be Tag Team Champs soon as well.   Maybe this is the PPV where Finn Balor finally shows up?  I don't know, but let's just keep cheering against Roman Reigns.


Overall, this will likely feel a lot like Payback 2: Electric Bugaloo, but I'll still stay up and watch it because it won't go as late as Wrestlemania 32 did.

Posted by Joshua Macala at 8:05 AM