Some people may say that they are familiar with the works of Mulo Muto and I know that I've reviewed them before, but here is the funny thing about Mulo Muto for me:  Sitting on my desk, next to the couch where I sit to do just about anything from eat to be on the laptop to watch television, are stacks of cassettes and almost directly in the middle of them all, plain as day to see, is the Mulo Muto / B E T A cassette.    Just glancing to my right quickly, I can also see the names Roadside Picnic, The Greatest of All-Time # 1, Window Kits and Shrunk, but yes, I always kind of remember Mulo Muto because it's always kind of their whether I'm thinking about it intentionally or not.

"Eterna Caduta" begins with a slight tapping and a wind instrument of some kind.   A scraping sound is added into this and it begins to sound as if it could be made with one metal pipe but I'm not sure on that.   Louder ohm glows come out but overall the feeling of the music right now is a quiet one.    It almost sounds as if someone- or something- is trying to claw their way out of somewhere.    A string pluck can be heard and it isn't in a series or anything, it just has that singular pluck and then we move on.

Sounds of doom take over before we venture into jaw harp space growths.    Through ups and downs we take on a sound of static drone, which begins to really just encapsulate the entire Side A.   There are some beeps though and with everything combined- not just because of the drone- this can become rather hypnotic.    I really think of things as being hypnotic more in the sense of hearing it on the surface, but what comes out here feels like it's more in the background so you're being hypnotized and might not even know it (subliminal hypnotics)

As Side A comes to an end by just sort of droning out with fewer and fewer laser blasts, Side B comes in with a static synth drone and remains there for most of- if not all of- the side.   Celestial space sounds can be heard, as can some jumbled manipulation, but mostly it just stays the course.    Pots begin rattling around and then there is this back and forth ringing like "Psycho".   Radar blips and high pitched feedback bring out the sharpness before an eerie hollow sound takes control and reminds me of Ghost in the Machine.

Guitar beeps and rattling take on an almost buzzing sound as well.   This goes into a Doctor Who feel and then it just sort of trails off to end the piece, much like how Side A came to an end.   I'm not sure I would consider Side A and Side B to be two different sides of this cassette though.   Side B certainly could stand on its own, if you only listened to that side for some reason, but when placed back to back Side B does seem to be a continuation of Side A.

While the overall feeling of this cassette could be considered either drone or minimal, it is easy enough to assume that what would grab the listener right away would be not only quieter but also simple.   Yet, the more you listen to this masterpiece by Mulo Muto, the more you will begin to hear the inner workings of the background (which makes it anything but simple) as well as a certain level of power that more than makes up for it seeming quiet. 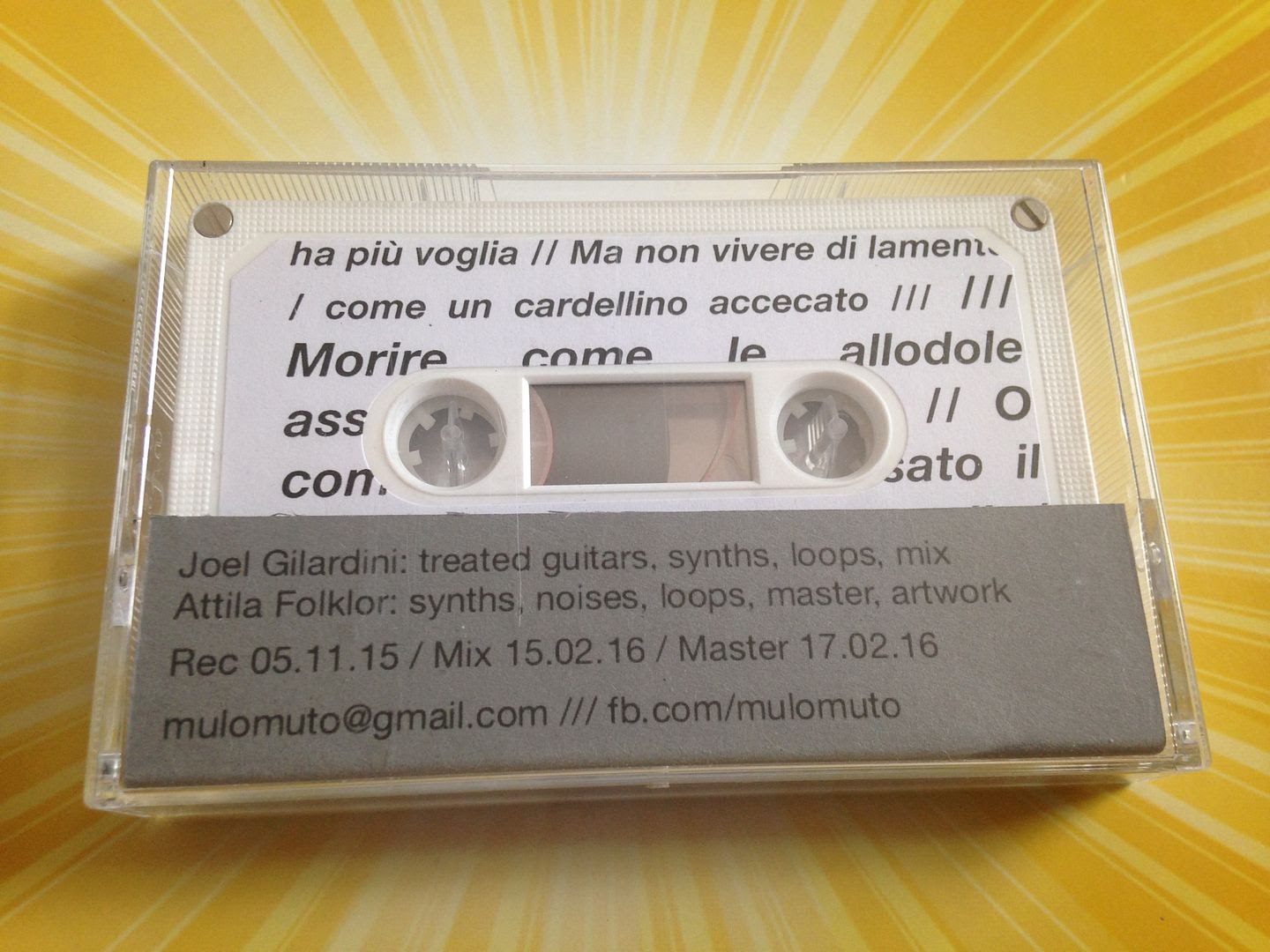 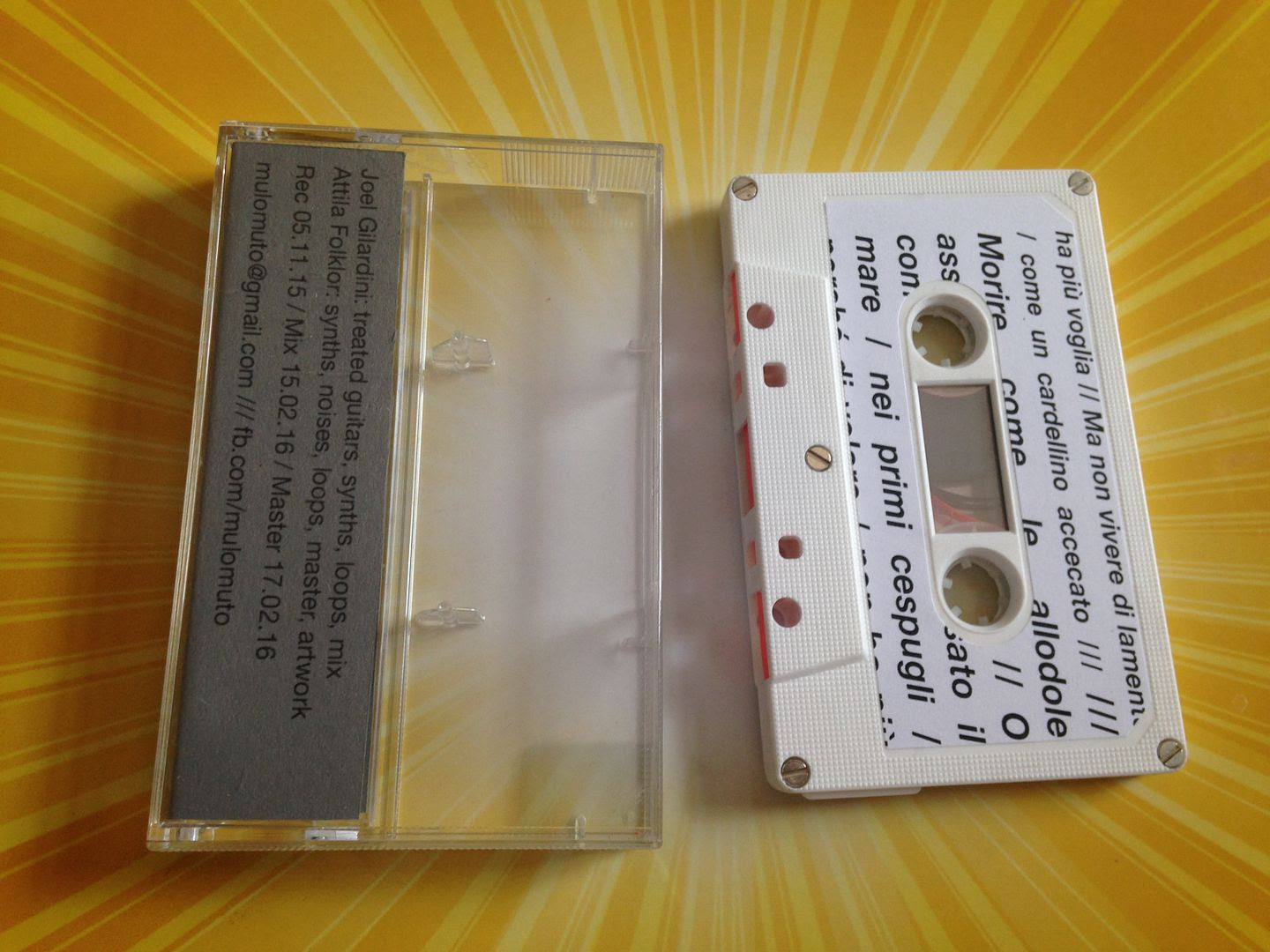 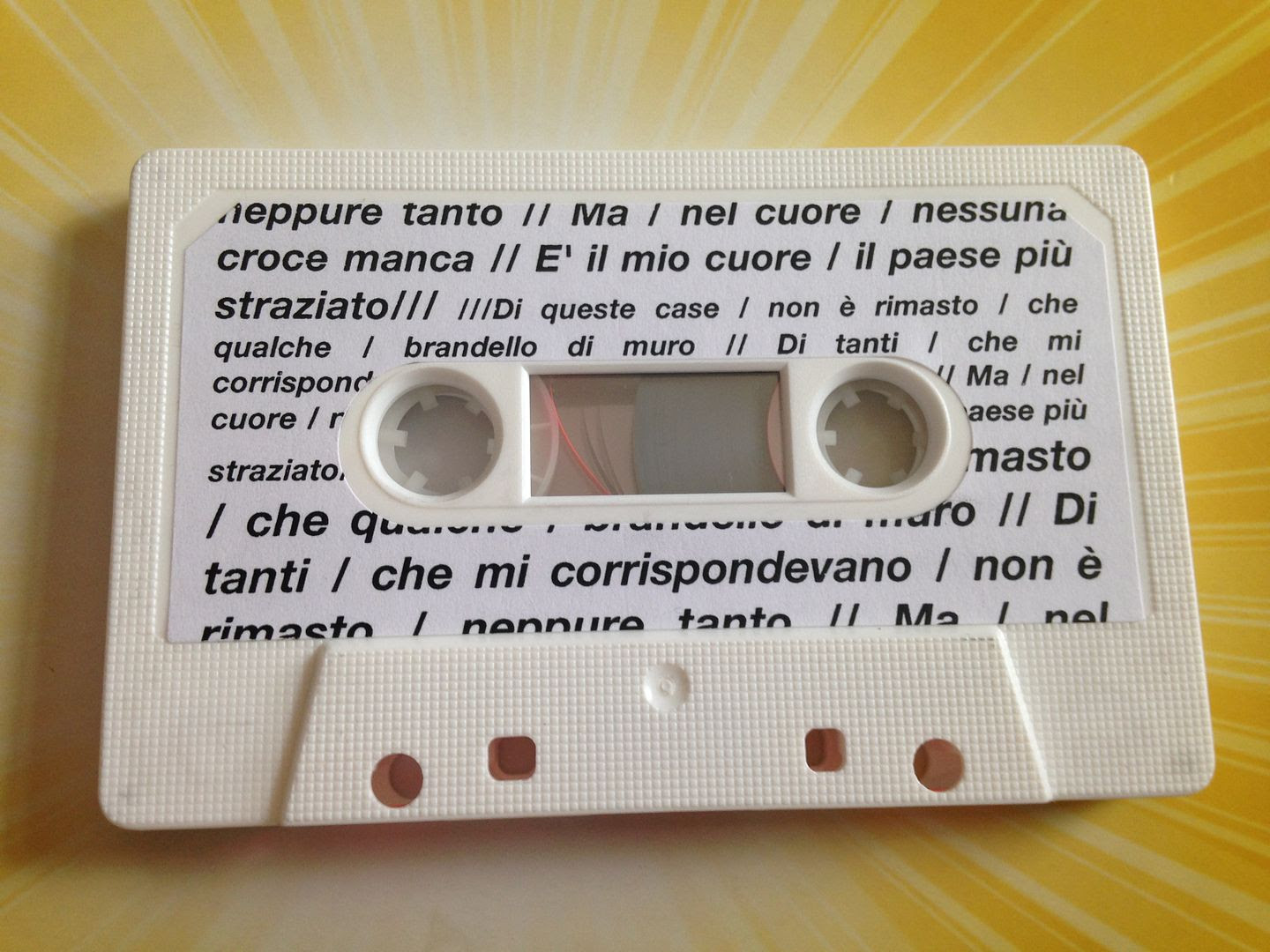 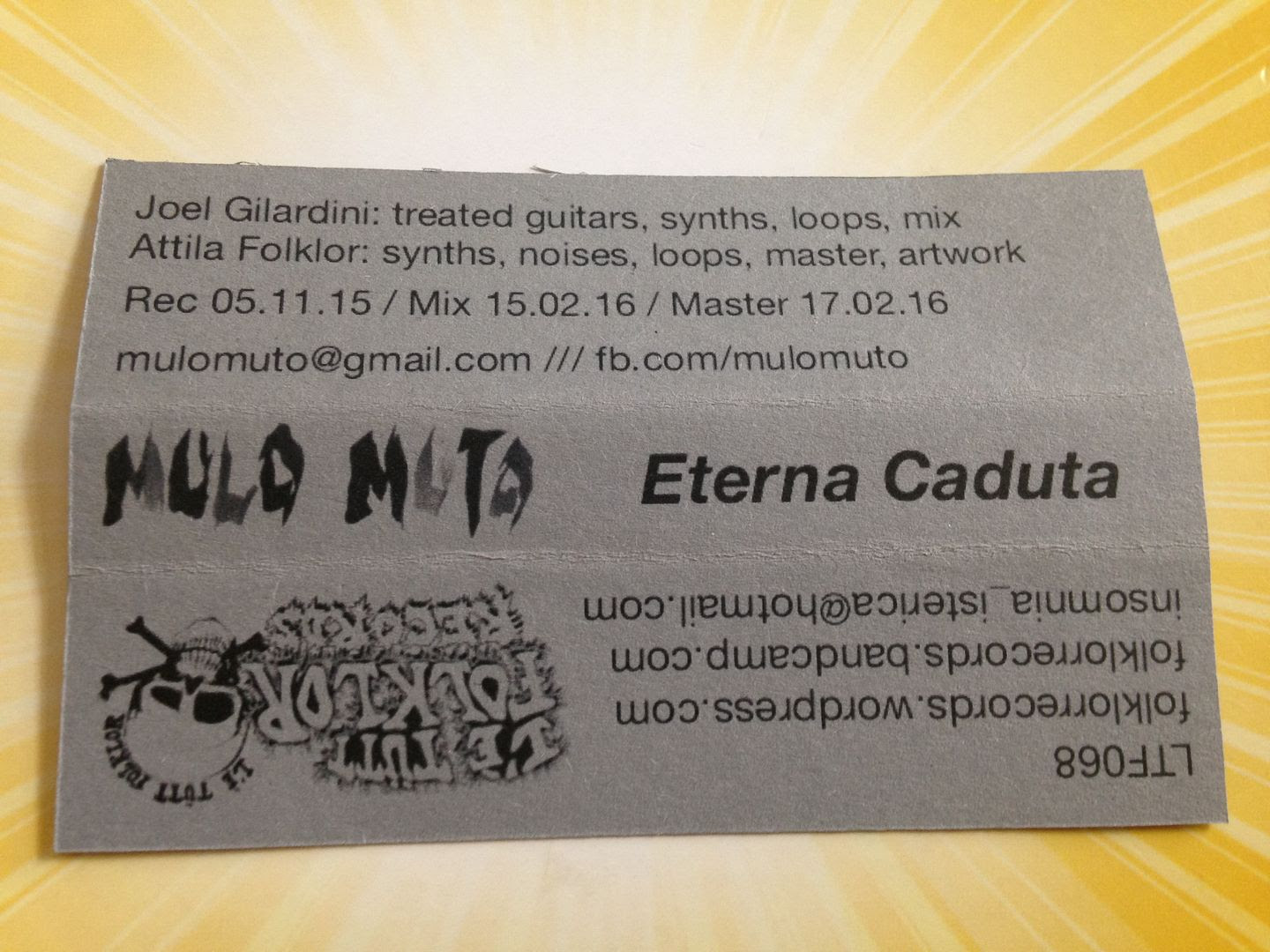 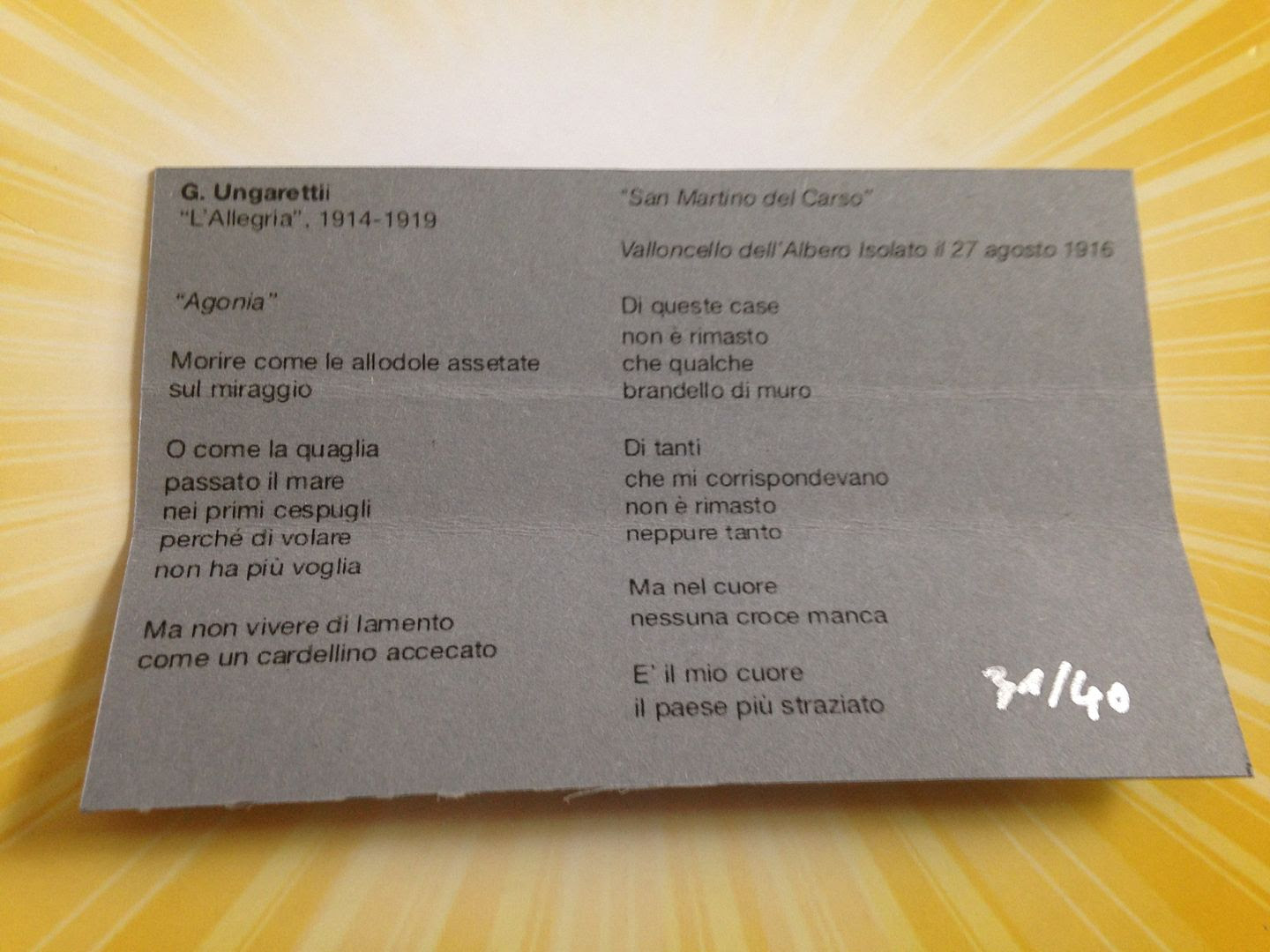 Posted by Joshua Macala at 7:41 AM