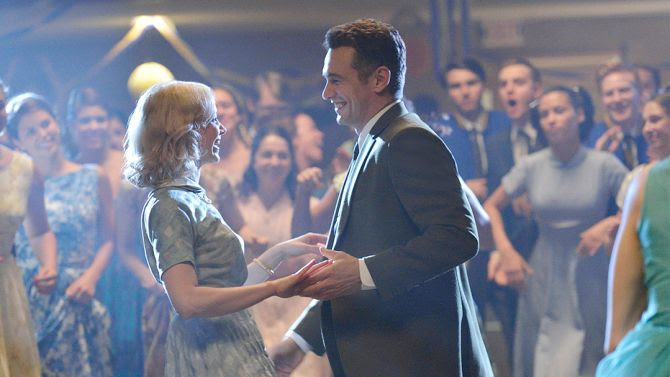 When we last left Jake in the past he was confronted by Bill who had a piece of the scrapbook about the assassination of JFK.   Bill has since learned a bit more about Jake and how he is from the future (and a brief summary of what we learned in the first episode) and how he must stop the assassination of JFK, though it has kind of been left unsaid as to *why* he must stop the assassination exactly and Bill just seems to be doing what he believes is right.     Jake offers to pay Bill $100 to drive him to Dallas and then they end up getting an apartment halfway between Dallas and Ft. Worth (or as Texans call it "The DFW area") because that's where Lee Harvey Oswald spends his time before killing JFK.

It's nice that Jake now has Bill helping him because it can keep him from being so lonely and it also gives him someone to talk to, but I'm kind of surprised that nothing has happened for the past to try and reject it yet.    Jake got a job at a school in Jodie as a teacher and, well, we're learning a lot about Texas in the year 1960 and mostly racism.    There is a secretary at the high school and not only is she a woman but she is black and that's a bad thing in 1960.    Jake actually helps her at one point when she runs out of gas and a gas station man refuses to service her and says she needs to go to the "black gas station" (though he uses a different word)

I think it's kind of funny watching it now because we have the same mindset as Jake.  Like, money is money and I don't believe your business is doing that well that you can pass up money from someone just based upon the color of their skin- which is stupid to begin with, but... Yeah, I feel like if I was sent back to this time period with Jake I'd spend too much time arguing with people about racism and while this could lead to more good in the future as we all know racism will never truly be gone.

Another aspect of this episode I found interesting and hadn't thought of before really was the language.    I know this is a timepiece and I do enjoy that about it, but I always think of things which come before the 1970's and even 1960's to an extent (And we're just right in 1960 here) as being so wholesome, you know, aside from the blind hatred.   I think it's because of the standards of movies and how it was a big deal for someone to say "damn" in "Gone With the Wind".    It's just one of those oddities where you expect everyone to act like they did on "Happy Days" or shows of that time but Bill is never hesitant to drop an f-bomb.

For me, this was a pretty important episode since we're on an eight episode arc.   I like to think of it the same way you would a roller-coaster ride.   The first four episodes really need to be the strong build, taking us up the track and by the end of the fourth episode (Which comes next) we should be perched upon the top of the track ready for our descent.   But the way down doesn't imply that it gets worse but rather gives you that feeling of excitement, sadness, joy and all around just runs the full gamit of emotions while leaving you with that rush.

I don't see that being a problem for episodes five through eight and the fact that we're almost halfway through is amazing.   I do expect the next episode to set up a pretty big cliffhanger of sorts, but I'm also just interested in seeing where the character of Lee Harvey Oswald goes because, of course, a lot of what happens cannot be known to an exact science and is only speculation but thus far I have enjoyed where it has taken me and look forward to every new episode in a way I have not with other television shows for quite some time.