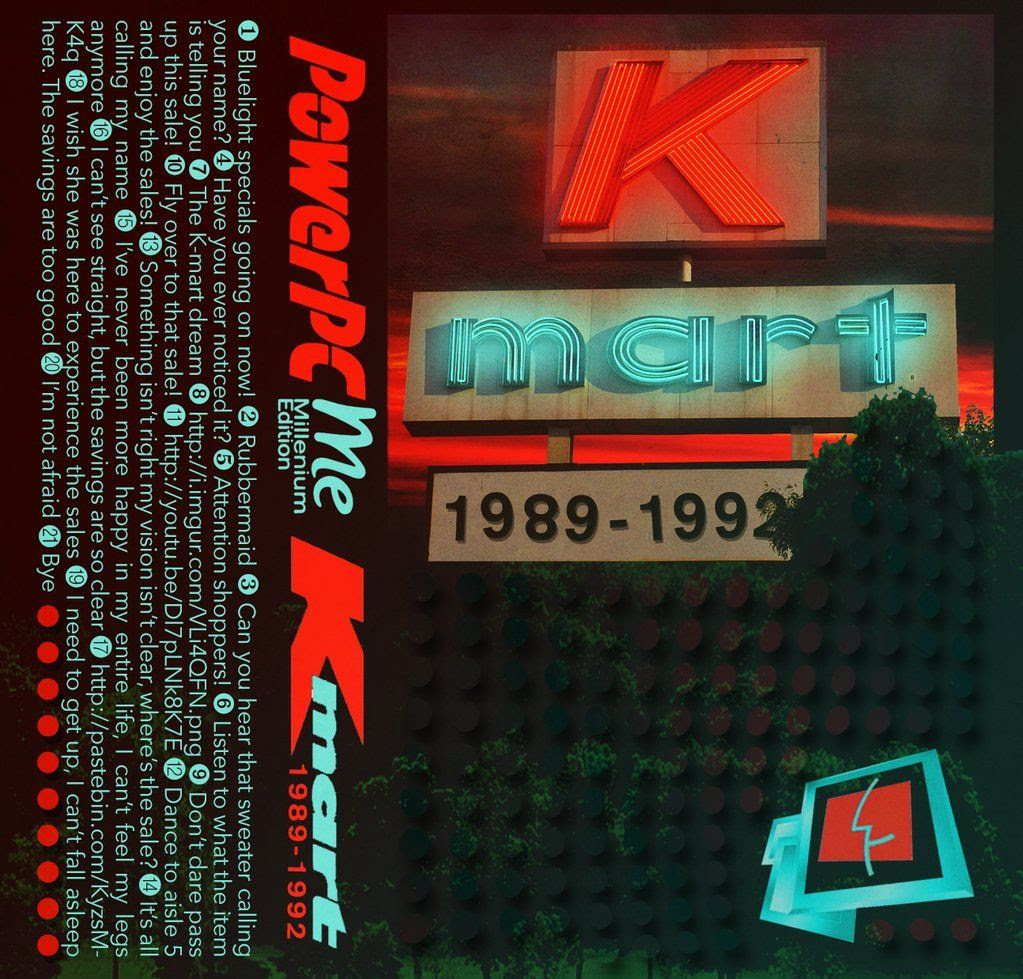 Did you know that Kmart is bringing back the blue light special?  I kid you not.   When we moved to Texas we only saw Kmarts here and there, never in Houston though, but since moving back to Connecticut we frequent the one in Cromwell quite often and it appears as if what once made Kmart so great is coming back around again.   When we went into the store once I actually got a pamphlet and stickers about it but I don't know where they are or I'd take pictures and add them to this review, but yes, the moral of the story here is don't try and change who you are to fit in with others because eventually you will just come back to yourself in the end... like Kmart.

So this was originally released on cassette in an edition of 50 less than a month from when I am typing this right now so it sold out fast.   I wonder if it was on the official Kmart website.   I wonder if Kmart knows/cares about this release.   I've emailed the label "Lost Angles" for comment but they just send me an automated message wishing me a "Super K fantastic day".   Whatever.   Have you seen that link to all of the old in store music from Kmart being released digitally?  If you haven't messed with that yet you might want to rethink the "experimental" part of your artist bio.

Two paragraphs in and this isn't really about the music yet, is it?   Between dreamy guitar notes in that FNL/ambient sound and then something closer to glo-fi as it grows quieter, minimal and with waves crashing there is also audio of Kmart ads, which might be played over the speakers, on here as well and so in the sense of this being related to Kmart it certainly does not disappoint.    I don't ever really recall buying music from Kmart, though I do remember shopping there quite a bit when there was a Super Kmart in Wallingford, but I do have another story I can relate to this.

Back when CDs were, like, $15 a pop, I remember going to a major retailer I won't name (but they don't exist anymore) buying a Kid Rock CD, copying it onto a cassette and then returning the CD.   This, of course, was back before you could burn CDs and I'm sure that the rules have changed now for such reasons, but it makes me feel less evil if I put this one onto a cassette of my own since it sold out so quickly.    But knowing that 50 of them exist out there makes me less likely to put it onto a cassette in a bootleg fashion because I could just save the blank for something which doesn't have a cassette release at all.

Posted by Joshua Macala at 8:18 AM