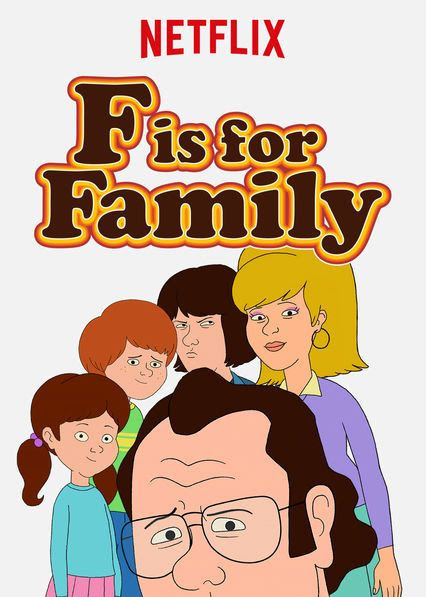 I will admit that I first watched this show because of two things: it is a Netflix original (I have yet to find a Netflix Original I didn't like) and it is animated.   Much like Bojack Horseman, I was expecting big things from this series and it definitely delivered.    The first episode had me a little bit worried at first though-- I was on the fence and unsure as to what my feelings would be based solely upon that first episode but there are only six episodes in the first season so I decided to at least see it all the way through and watch the other five episodes.    Somewhere around the third episode though I no longer needed to feel like I was sticking it out for the sake of sticking it out but now I'm looking forward to a second season.

This show centers around a family in the 1970's and, well, it's kind of like "That 70's Show" except it has a more broad focus on the whole family rather than just one of the kids and his stoner friends.   It seems like the majority of the focus is around the father character but each of the other characters has their own stories to the point where they all become characters and you know a little bit about each of them.   In every animated series based on a family (The Simpsons, Bob's Burgers, Family Guy, etc.) it is important for each character to have their own identity and not just feel like background noise and "F is for Family" manages to pull that off in just six episodes.

There are also other reoccuring characters which have their own personas and could become fan favorites over time.    From co-workers to friends to neighbors there is just a lot of character in this show and I really like that about it.   There is quite a bit of "profanity" and as it is on Netflix they can obviously drop some f-bombs but along with that and drug content there is also slight nudity-- in one scene we do see the father's hairy butt and balls as he's having sex.   It's just one of those things though where it pushes the boundaries.    It's not as tame as something on Comedy Central but it's not full on terrible either to the point where they go beyond what would be rated "R" in a real life movie.   (I struggle to recall the name, but there does exist an animated film that Rob Zombie had his hand in and it felt like a Tex Avery porno and I was just not into it.   "F is for Family" does not take things quite that far and it is the better for it)

When I started watching "F is for Family" I wasn't sure if I was going to be able to make it to the second episode.   I'm glad I did though because now I just want to see more and, well, every show should always leave you wanting more.    I can't really compare this show with any other show because it's on Netflix and is I believe only the second animated series of this kind on Netflix (And I say that in the sense that it is a cartoon for adults like "Bojack Horseman" even though Netflix has animated originals for kids like whoa) but these are new waters we are exploring with these original series on Netflix, is it not?   "F is for Family" isn't really like "Bojack Horseman" because it isn't really like anything else at all.   But it certainly is funny as all get out.