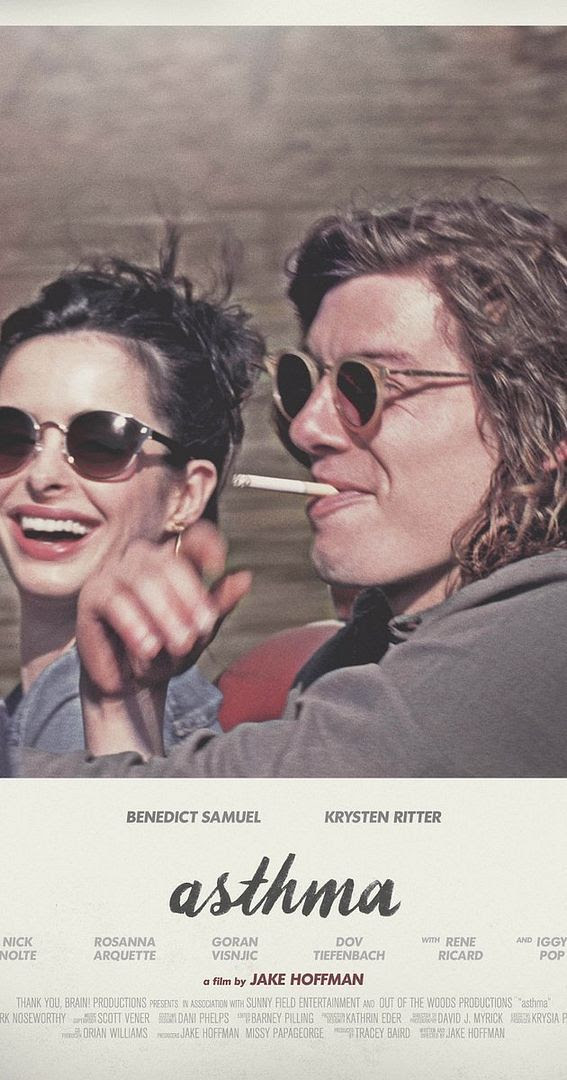 I really put this movie on because it was on Netflix and I didn't know what else to watch.   The description made it seem like something I might be interested in and since it has Krysten Ritter in it as well I figured I'd give it a shot.    At first it seems kind of strange when they're painting because this main character- Gus- seems like a bit of an idiot, but then he unsuccessfully tries to kill himself (causing him to go into these breathing fits throughout the movie, which are like asthma) and just goes on this adventure without a care in the world.

As the movie moves along different details of it unfold and I do enjoy that about it- because it feels like a mystery which unlocks itself as you watch it.   A lot of movies put things right out there for you from the start or they want you to guess at them until the big reveal at the very end but "Asthma" has a good way about it and how it goes about showing you pieces of the truth.    It takes some time into the movie, but realizing that Gus is a heroin addict makes sense as to why he might try and kill himself.

Then, by the end, it is revealed that most all of this is being done because Gus' parents are divorced and his mom is sick and dying.   I know divorce isn't easy but this does seem like a lot just for something which seems like an every day occurance now.   But I think the fact that Gus realizes his mom is dying and he might somehow think that could have been prevented had his parents not divorced is what makes him seem like less of a crybaby.    I'm not going to run the numbers but I bet there are a lot more kids out there with divorced parents than there are heroin addicts.

Parts of this are about music and the soundtrack is nice though the Netflix description made it seem like the main character was going to be the rock n roller but he doesn't seem to have any real musical talent.    Throughout the movie you just get to see Gus living this care-free lifestyle because he almost just died and nothing seems to be keeping him to this world of ours.    It's a feeling that while watching it I wish I could go back to, such as my younger years, but by the end of the movie I'm glad I'm not in that position anymore and I think for a lot of people- possibly even addicts who happen to see this movie somehow- they will feel the same way and not want to be like Gus and maybe even no longer want to live through him in this movie.

I'm probably not going to watch "Asthma" a second time for various reasons, but if I did I bet I would see Gus in a different light the second time through.  A lot of what I thought was cool the first time through and I felt like maybe I wanted to do too would seem more childish and just... like a lost child more than anything else.    Plus the whole drug addiction thing just isn't my style either.