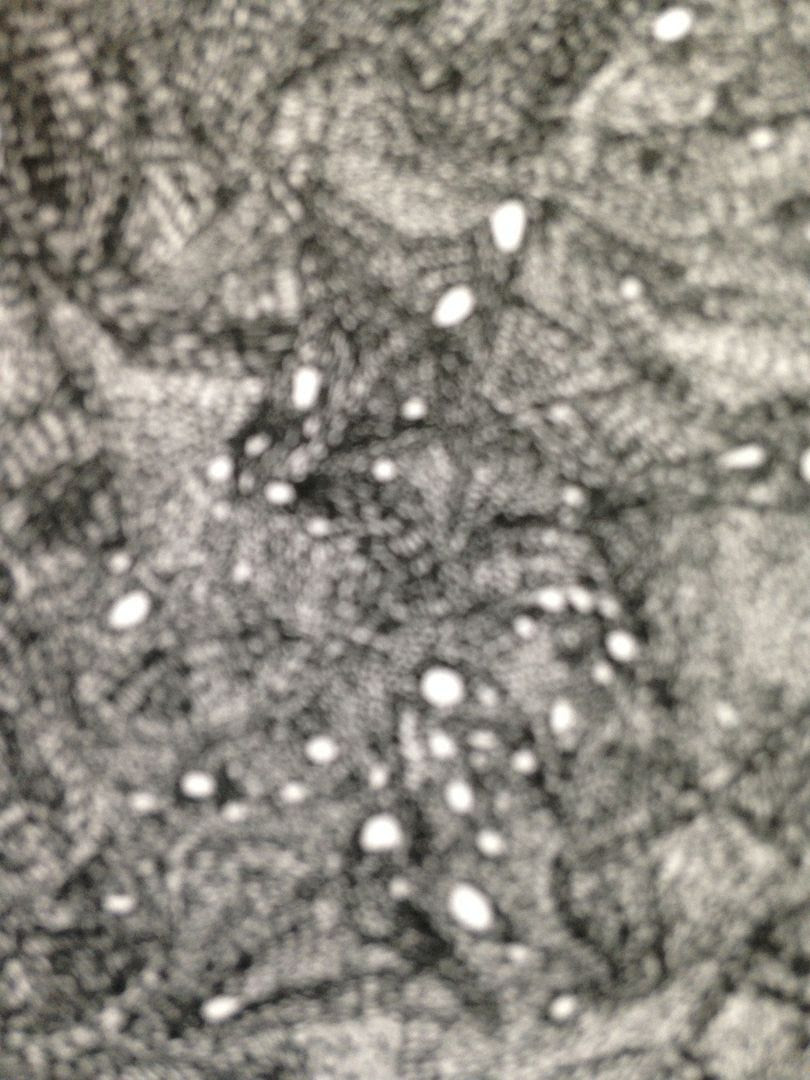 It is worth noting that when I first received this cassette I thought it was a split between the two artists.   It threw me for a loop though because the front image is "Boyle/Bucko" and the side says "Bucko/Boyle".    There is no marking on either side of the cassette itself or linear notes to tell me who would be on each side and based on the names being switched on the cover and side I couldn't just assume whoever came first would be on the side it was rewound to when I got it.    But, looking over the Bandcamp page for this release I've come to the conclusion that it's more of a case of a collaboration between Bob Bucko Jr. and John Boyle.    After all, the songs are identified as being by either so I can only assume they are by both.     Why did I think this was a split?   Why didn't I read the note Bob included before jumping to conclusions?   Insert your own "Office Space" joke here please (I'm still surprised someone hasn't made that game yet.   Unless they have and it just isn't something I've ever seen, but I'm talking, like, having it in stores next to Twister)

We begin things with what I can only describe as bells but they sound as if they are being used in an accoridion manner.   Every time I hear something I've heard before but still am unsure as to what it is exactly I want to study the music that much closely so that I can pinpoint it and say "Ah! That's what that is!"  But at the same time I still feel like that takes a lot of the mystery out of the music and I am just not quite ready to do that yet.    (Remember when you used to think of music simply as being music and not hearing the bass, drums and guitar seperately?)   This goes into some angelic harmonies and then a third sound combines in which almost sounds like singing.   When I thought this was a split I had this side pegged as being BBJr. simply because of the way those layers fall into place, but really, that was also based on the fact that I may or may not have ever heard John Boyle before.

A second piece begins with a deep sea cello string feel.   It's expanding and growing but not before your eyes, rather before your ears.     Chimes come in next and they sound like an early ringtone.   A quieter flute sound comes out and turns into distorted waves.   The flute is back and it sounds as if it is fighting with Godzilla (or the entrance music of either Awesome Kong or Samoa Joe, depending upon who you know)   Words echo as they are spoken between two different people.     Reverb waves travel through space to end the side and I'm not going to say that I felt 100% like this was the BBJr. side after listening to it all the way through the first time (Luckily on consequent listens I already had the Bandcamp facts in front of me) but I wouldn't have put it past him to create something like this.    Can you sense my frustration over thinking this was a split because it didn't really do me much harm.

On the flip side we have more tingly electronic accordion feels.   It could be an electric guitar this time though.   But it is mostly existing in the world of treble, no bass.    Through the alien-like sound of crystal cubes or perhaps that magic crystal from the He-Man live action film comes what is some sort of version of chamber music.    The guitars do that droning wave thing that makes me think of Lost Trail and, yes, this just goes back to the beginning where I stated that I should really learn more about what goes into these songs so as to be better at identifying it in the future but I refuse.    Though based upon listening to this side, I'd still say if this was a split BBJr. was Side A and this was John Boyle.    It doesn't really matter since this was a collaboration and not a split but wouldn't it be funny if one day, five or ten years from now it was revealed that this secretly was a split?   How come no one does stuff like that anymore?  (Or have they ever?)  Maybe they have and we just don't know about it yet.

In any event, this cassette has made me do exactly what a split cassette should do though as I keep reminding myself, it is not a split.  (Can someone get an image for me of that wrestling guy who was all like "It's still real to me" so I can make him say "It's still a split to me"?  Thanks)  It has furthered my interest in the music of Bob Bucko Jr., who by this point in time should be a household name for you considering you're reading Raised by Gypsies.    And it has also made me interested in the music of John Boyle, who according to Discogs also performs under the name  Blackalicious.   Okay, maybe not, but I'm going to look him up on Discogs now.   You add this cassette to your shopping cart because you deserve it. 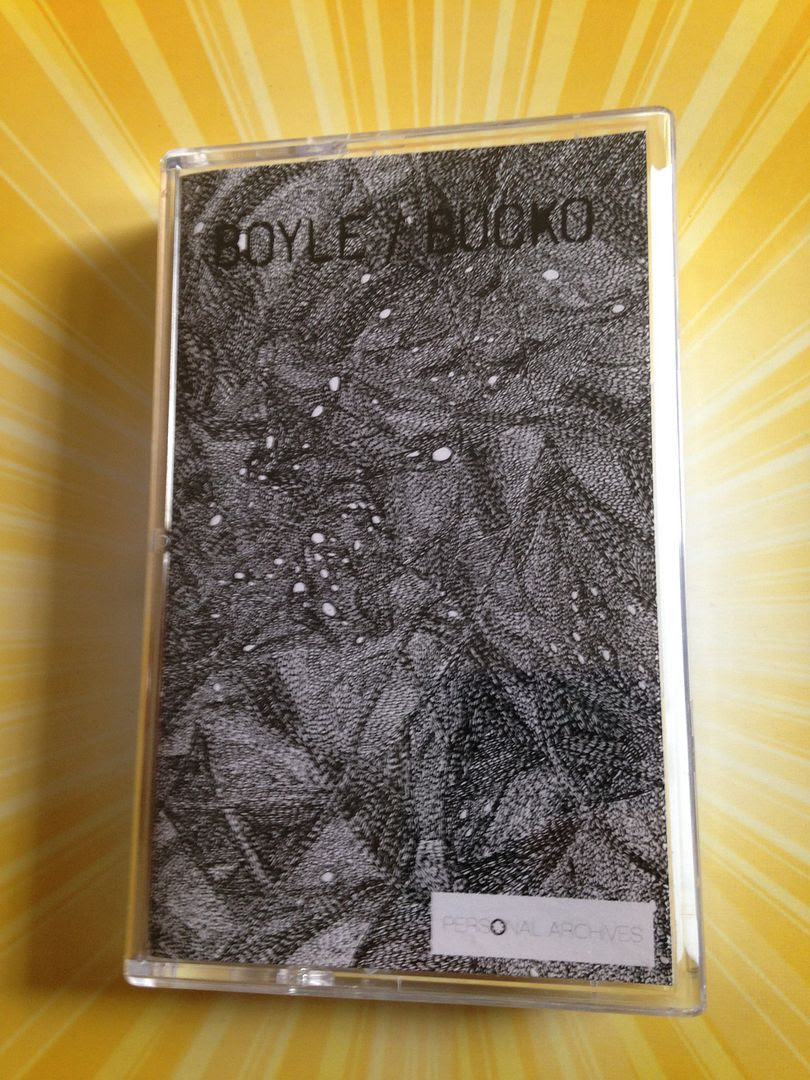 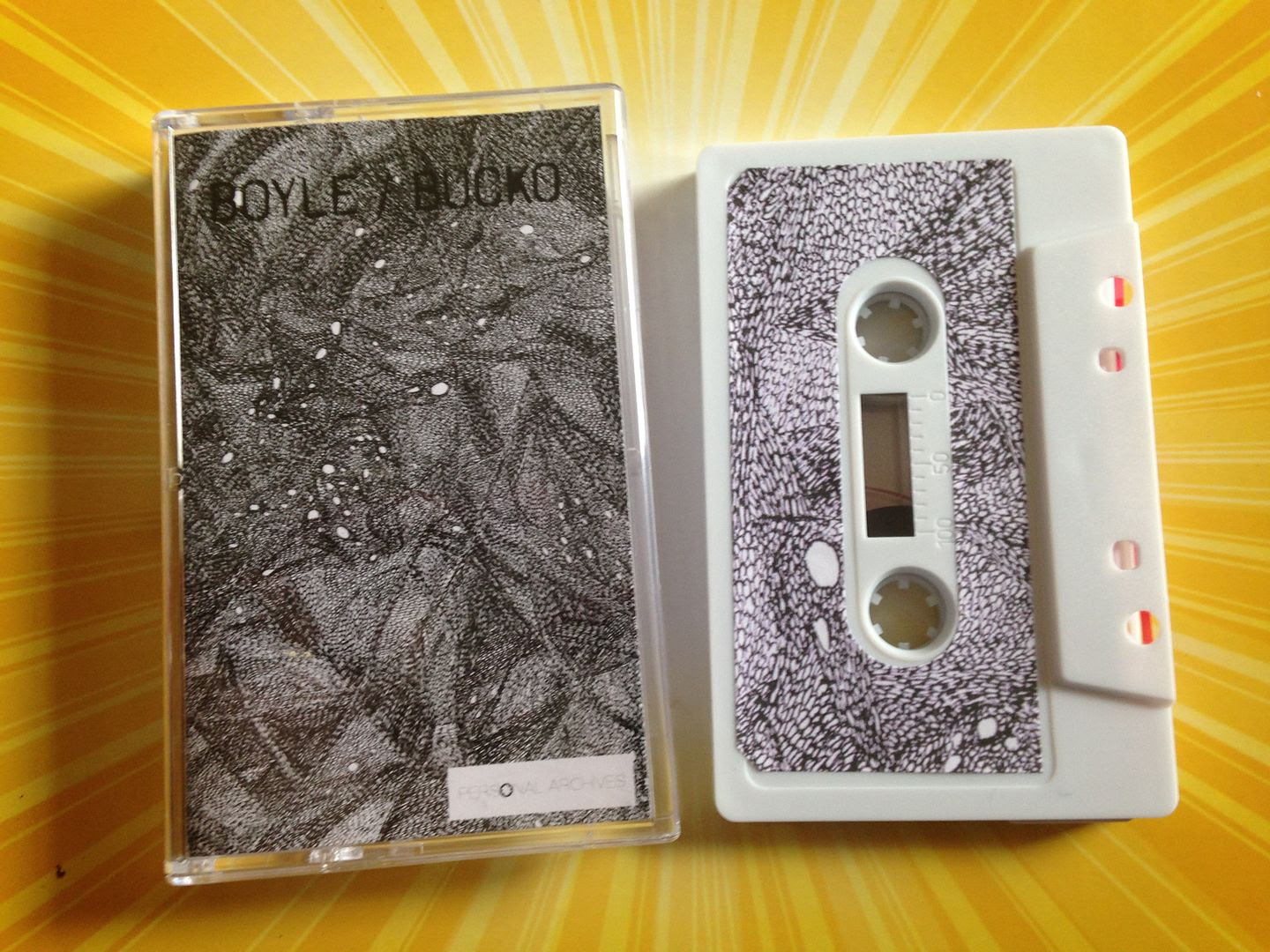 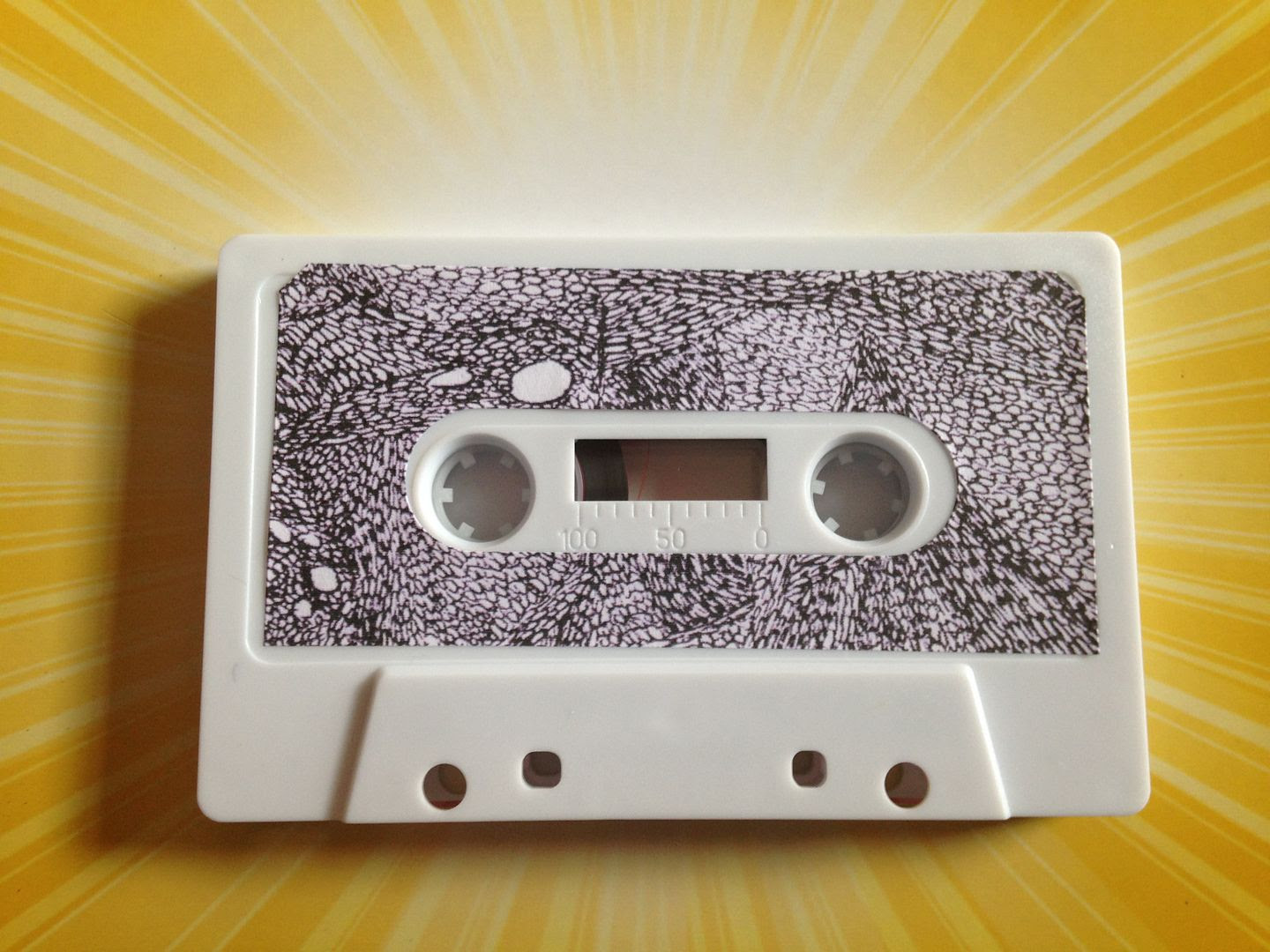 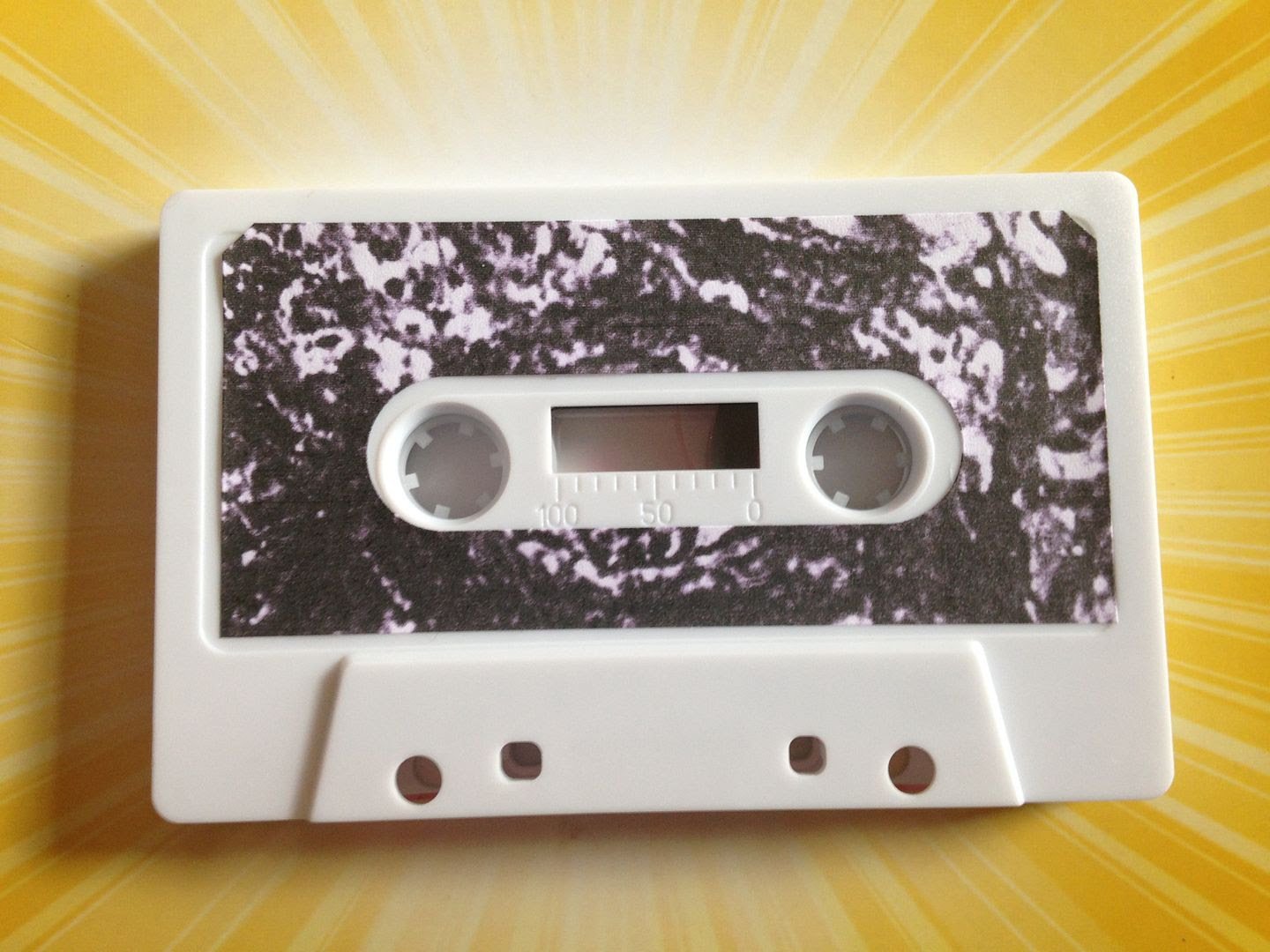 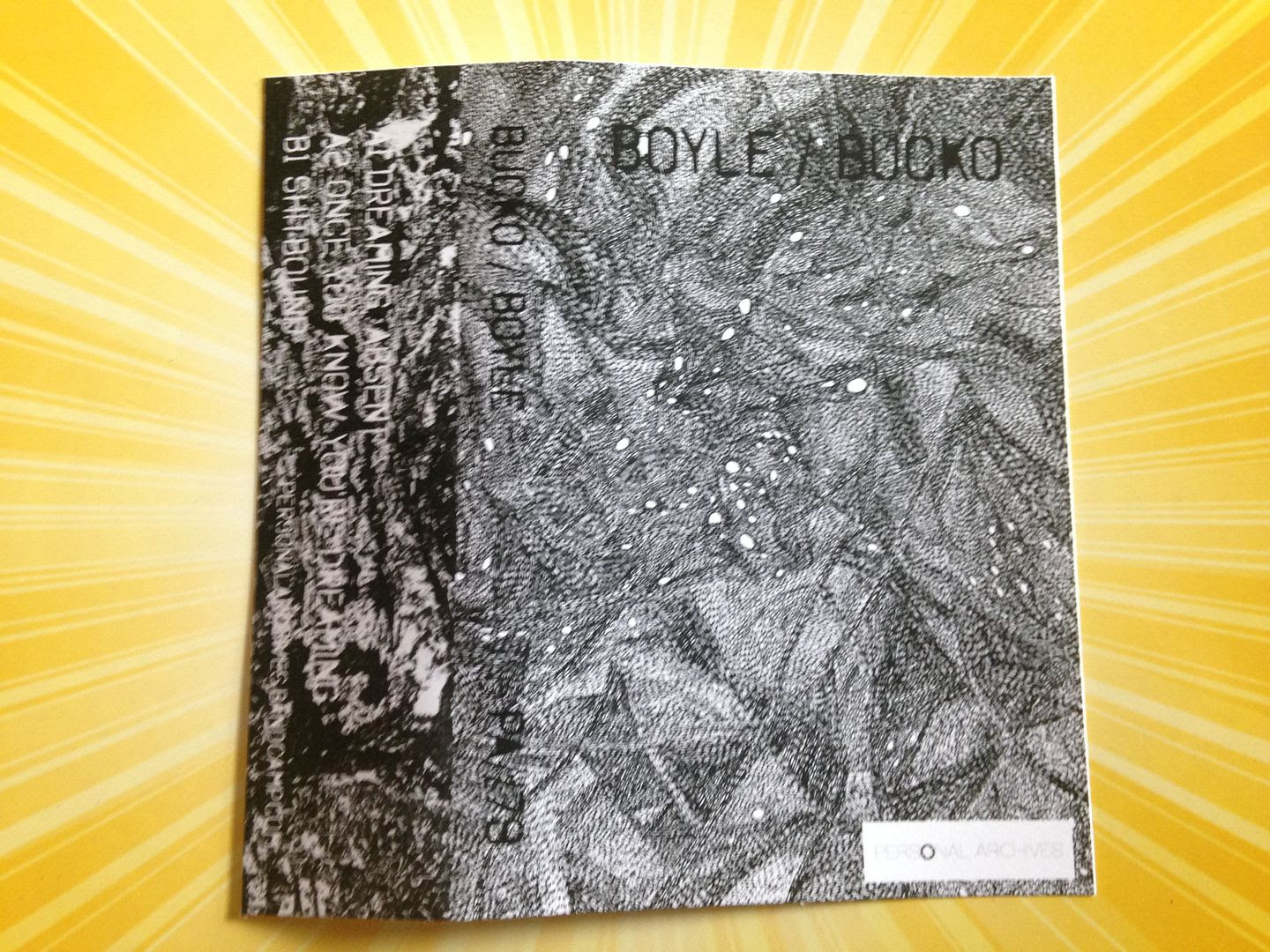