Autographs from the Opposition (2015)

In this post you will find items signed by players and managers which the New Britain Rock Cats faced at home in the 2015 season. 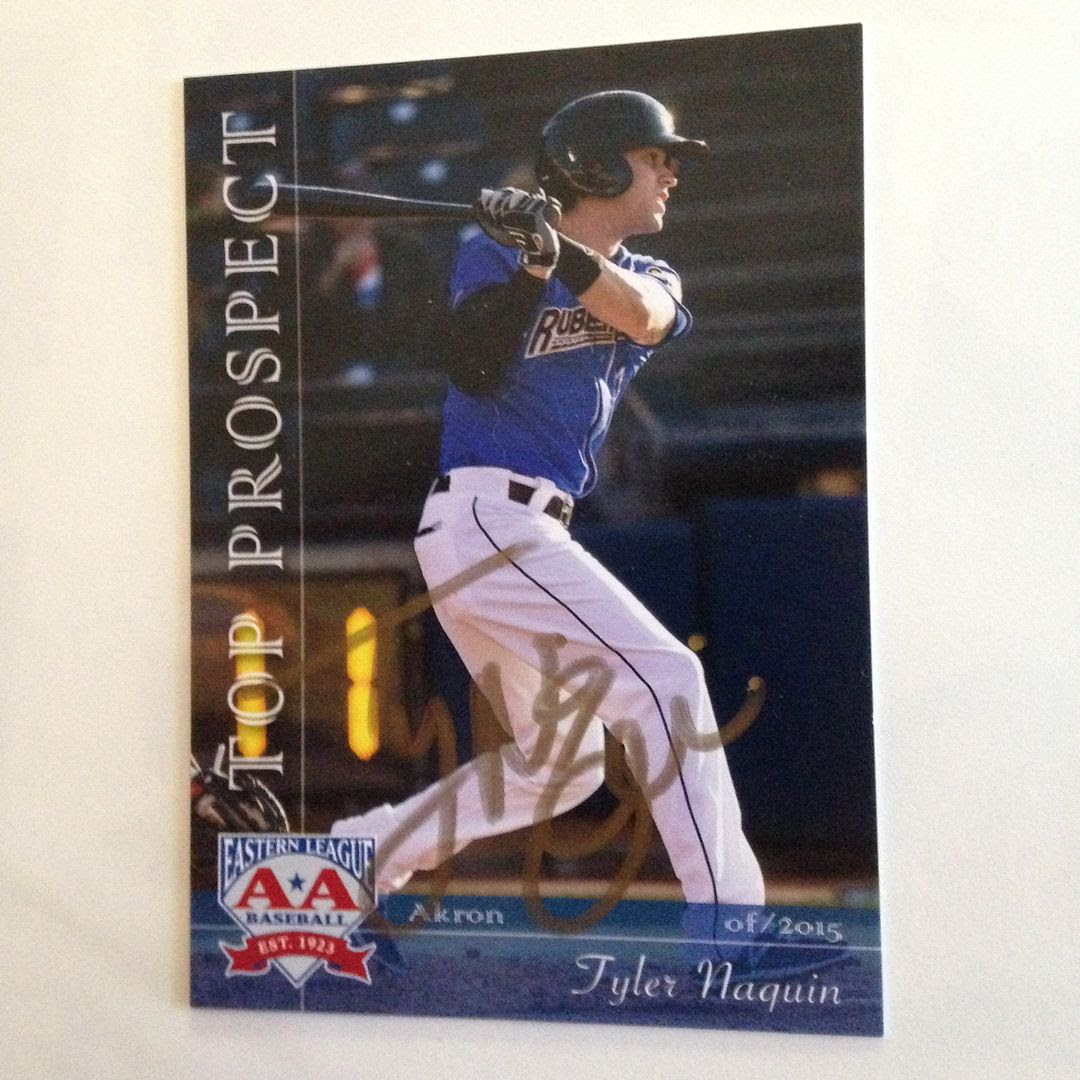 Tyler Naquin / Akron Rubberducks
I had just purchased the Top Prospects set and saw his card in the pack.  He was down near the dug out signing anyway, so I ran down to have him sign this card.  It was the first autograph we asked an opposing team player for quite possibly ever. 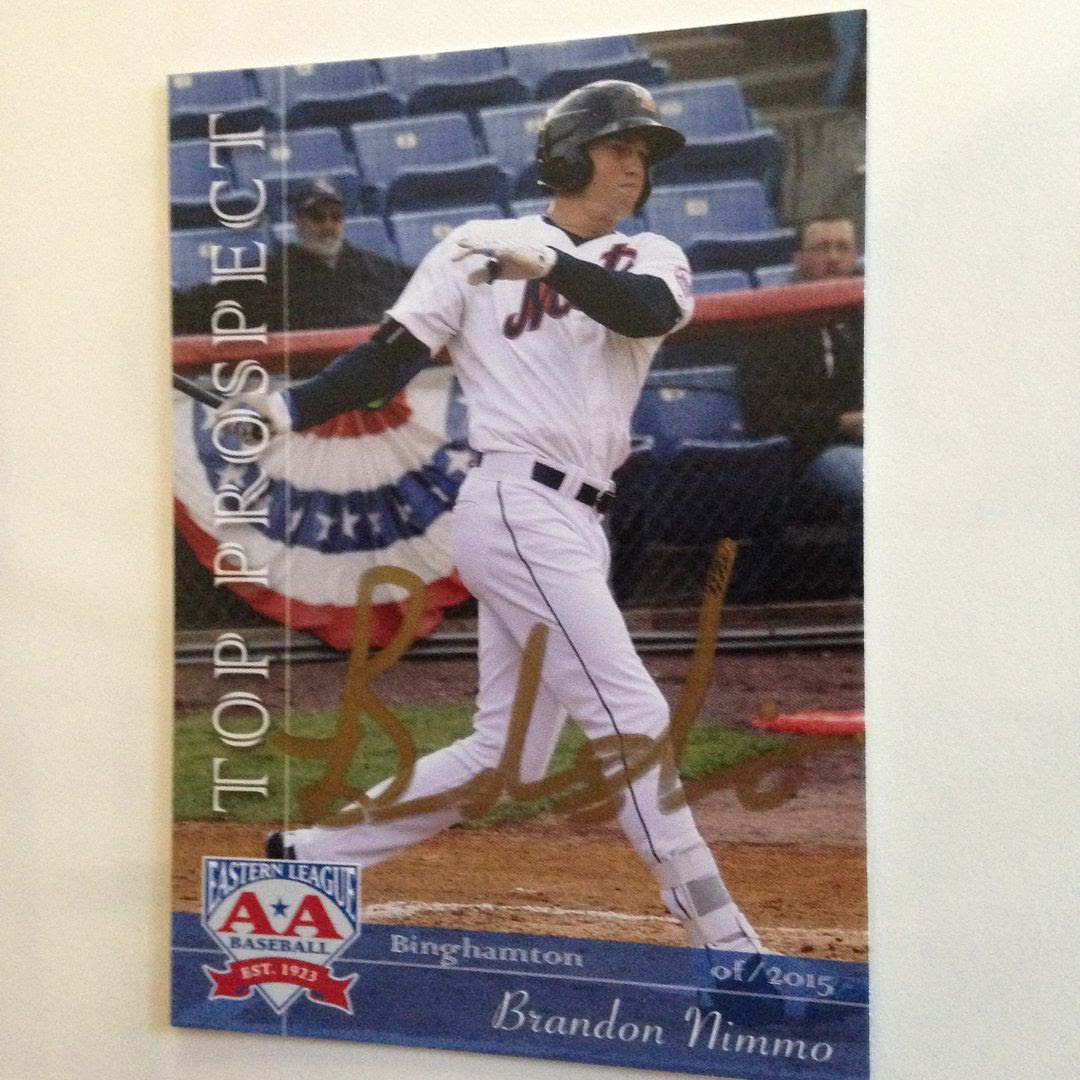 Brandon Nimmo / Binghamton Mets
One of the nicest guys I've ever met.  I just wished I had remembered something for Michael Conforto to sign and/or planned in advance to bring more items for Brandon Nimmo to sign as well.   We were lucky enough to have him sign this card on the second game of their first series with the Rock Cats and then we saw the B-Mets again the next day and could have had Brandon Nimmo sign another card or ball or something if we had planned in out in advance better but we're kind of learning on the go. 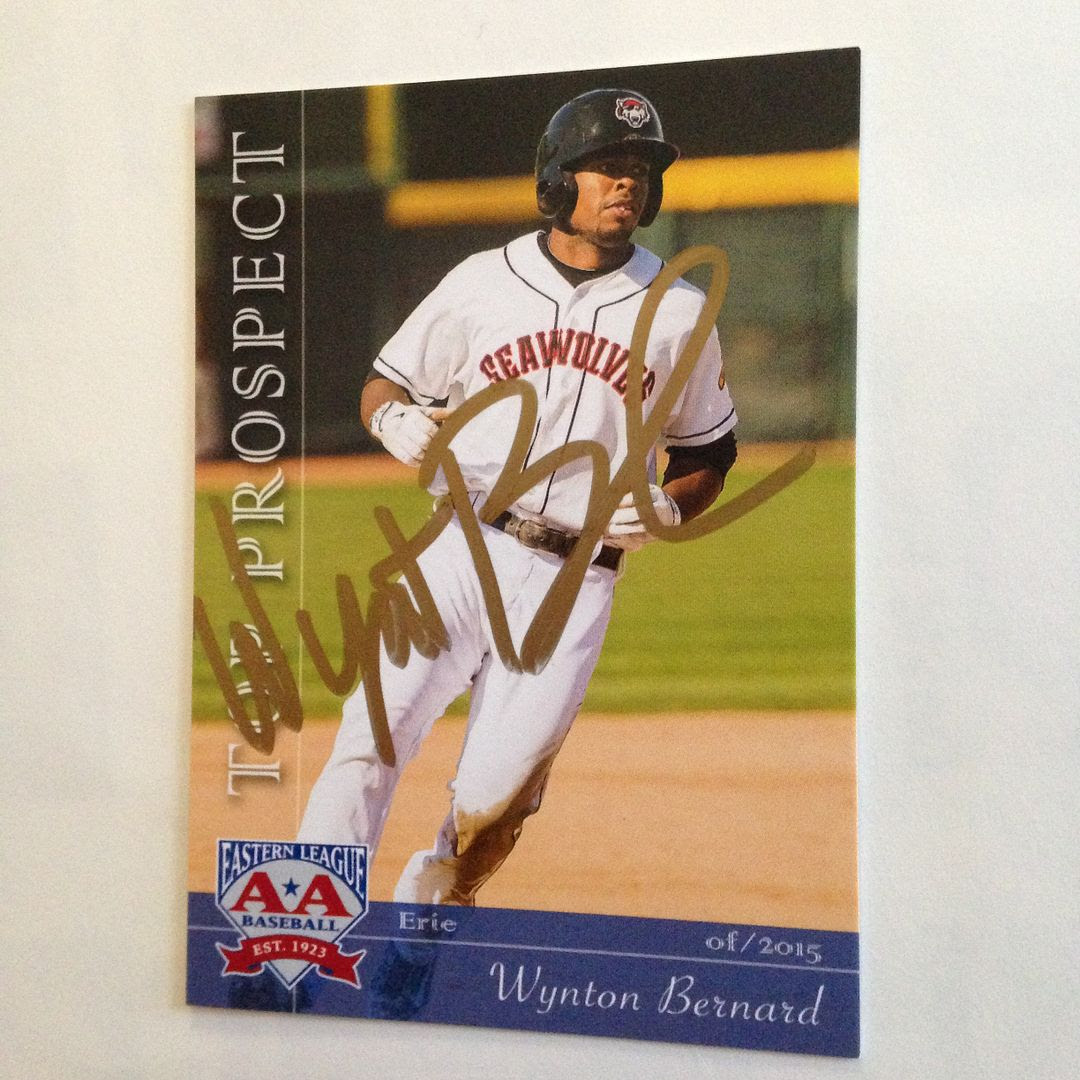 Wynton Bernard / Erie Sea Wolves
I thought Wynton Bernard was going to have a "superstar" attitude.   This was first found in a certain member of the B-Mets I won't name and later on in the season from Trenton Thunder player Jake Cave.  Wynton Bernard was actually very nice and signed autographs before the game for all who wanted them.  I was impressed by this. 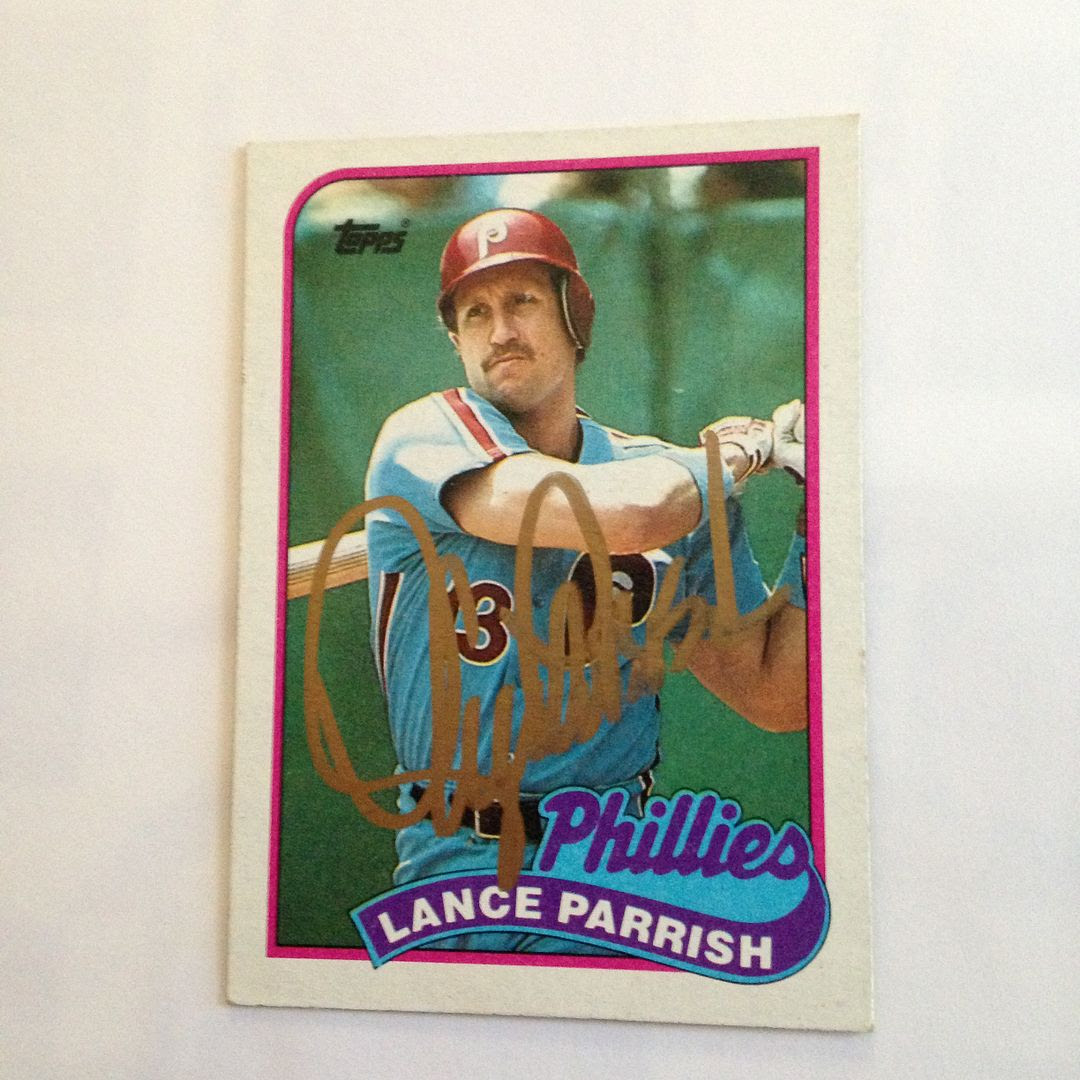 Lance Parrish / Erie Sea Wolves
Lance Parrish is a former Major League player who actually played for the Phillies after spending most of his career with the Detroit Tigers.  He is the manager for the Erie Sea Wolves and this card came from my personal collection.  I felt weird not giving him a card to sign that was from his Tigers days but I also didn't want to buy a card on eBay.   He seemed nice enough, though this was at a time when the Sea Wolves had already lost two games to the Rock Cats. 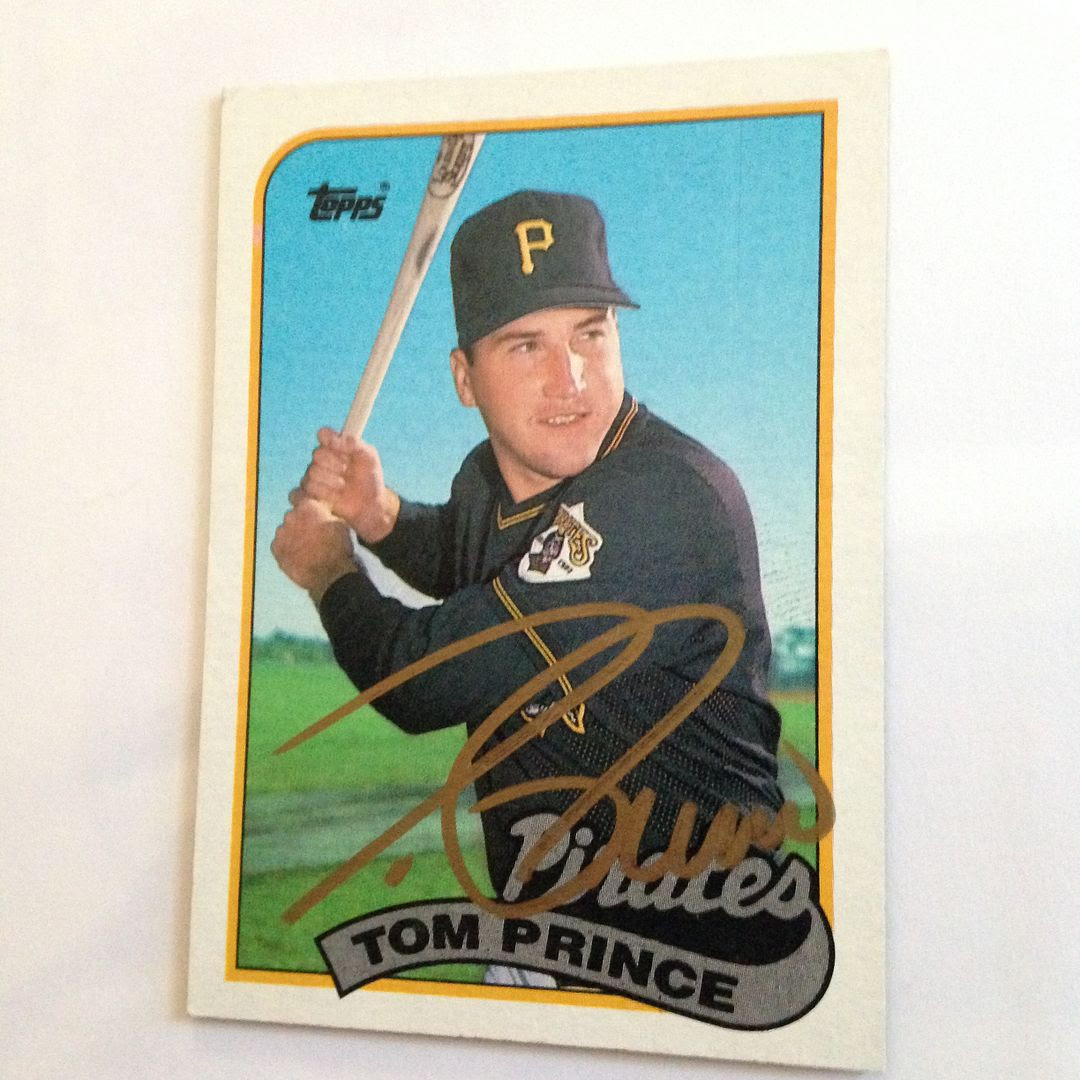 Tom Prince / Altoona Curve
The Altoona Curve games were one of the first series (and it was towards the end of the season) where we really planned for the coaches and players in advance.  I actually even ordered a Josh Bell card from eBay but it didn't come until after this series and he was in Triple A anyway so none of that mattered.   Tom Prince is a former Major League player and current manager of the Altoona Curve, the Double A affiliate of the Pittsburgh Pirates.   He sat on the right side of the bench and would not come over to the left side where everyone was waiting for autographs.  After getting my other two cards signed I went to the right side (as I had to do with Lance Parrish as well) and asked him to sign, to which he didn't seem to particularly object. 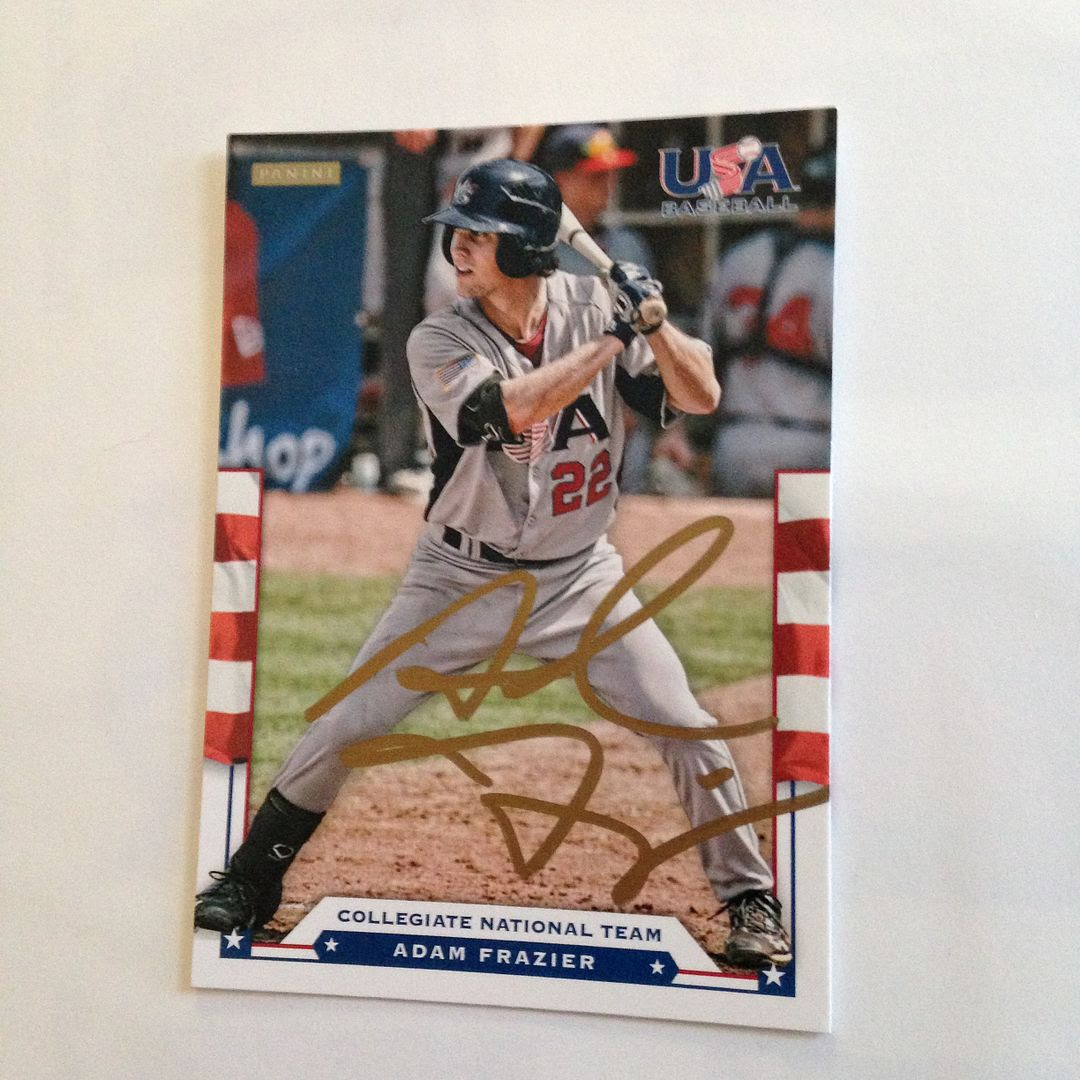 Adam Frazier / Altoona Curve
Adam Frazier is one of the Curve's Top Prospects if only because their other Top Prospects have moved up.   He was very nice about signing and I purchased this card in advance of the game on eBay.   The least expensive option ended up being getting this card as a lot of three so I was going to give the other two cards to some kids to get signed but didn't see any at the time so I've ended up now just having two extras of this card unsigned. 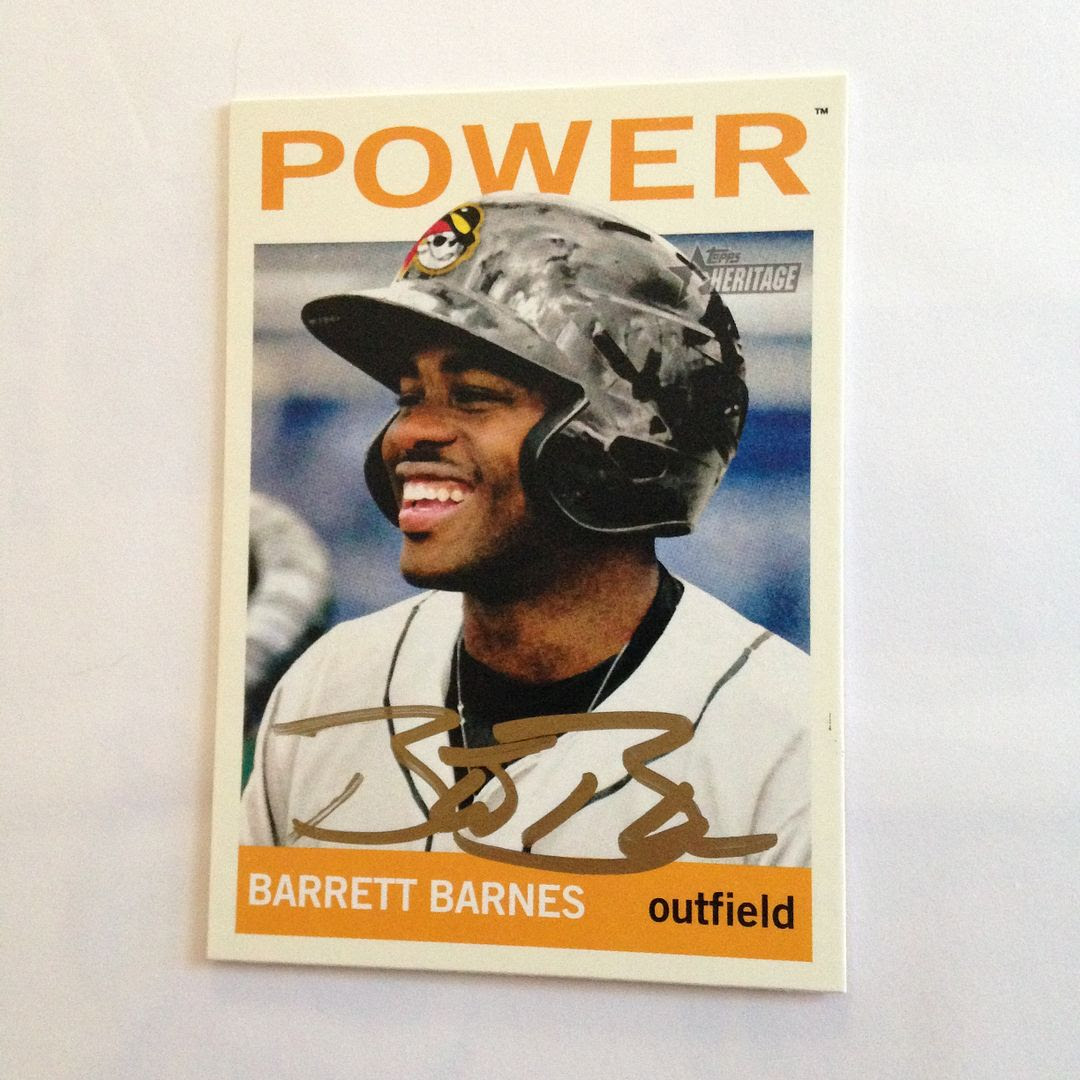 Barrett Barnes / Altoona Curve
This card was also purchased in advance of this series on eBay.  This is something we might be doing more of next season as well.    When this card came in the mail- and it was in its protective case still- Quentin was carrying it around a lot as if he was a really big fan of it so that was nice going into the game and having Quentin ask for it to be signed.   Barrett Barnes was very nice about signing before the game for everyone who wanted his autograph.   I also really just like the style and overall look of this card.  Shout out to whoever designed it.  (And I did see other people with it to get signed as well) 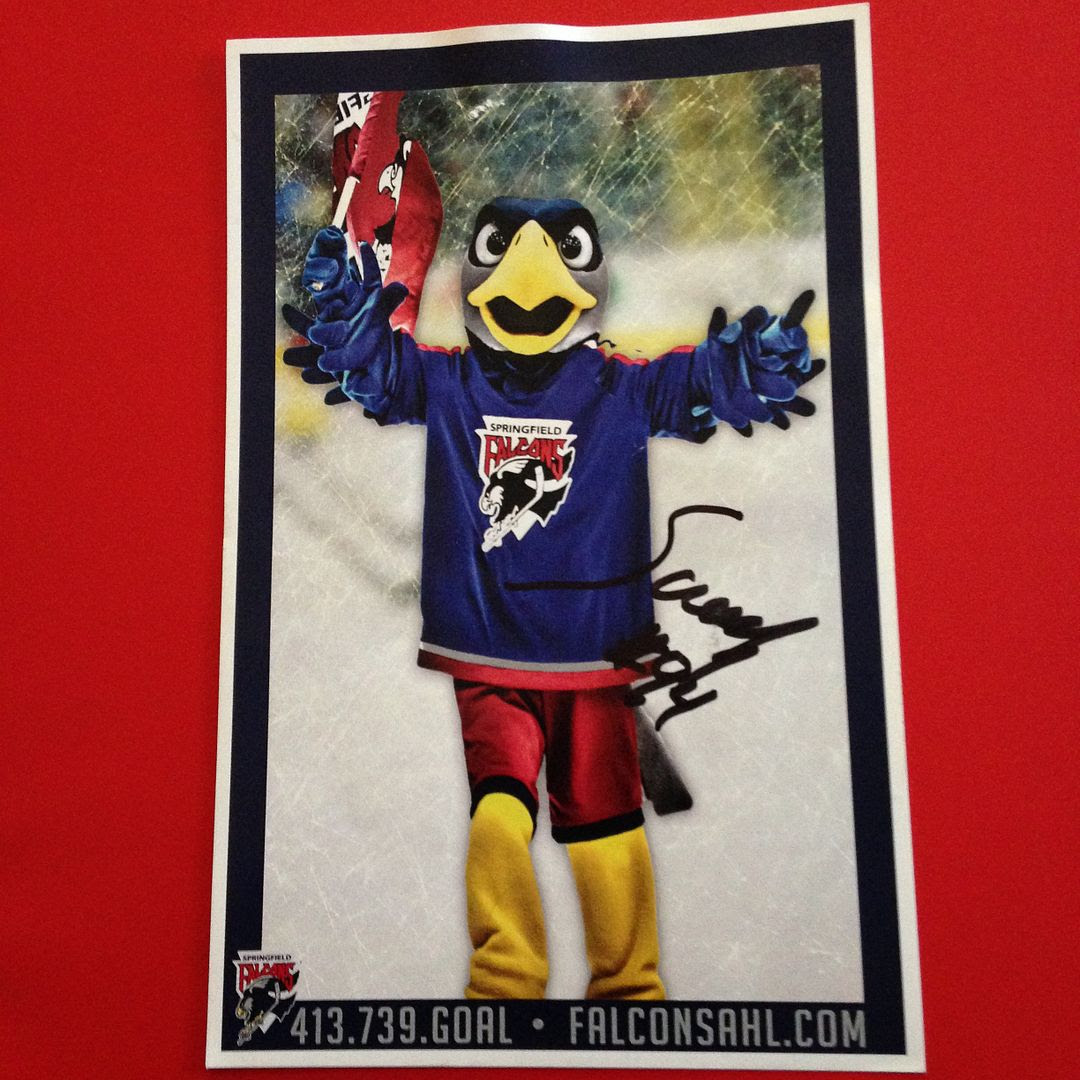 Screech is actually not from a baseball team but he was signing these pictures they were also giving away during Rocky's Birthday Party when a lot of mascots showed up in the same place.  I wish every mascot there brought photos to sign.   Especially Chuck E. Cheese. 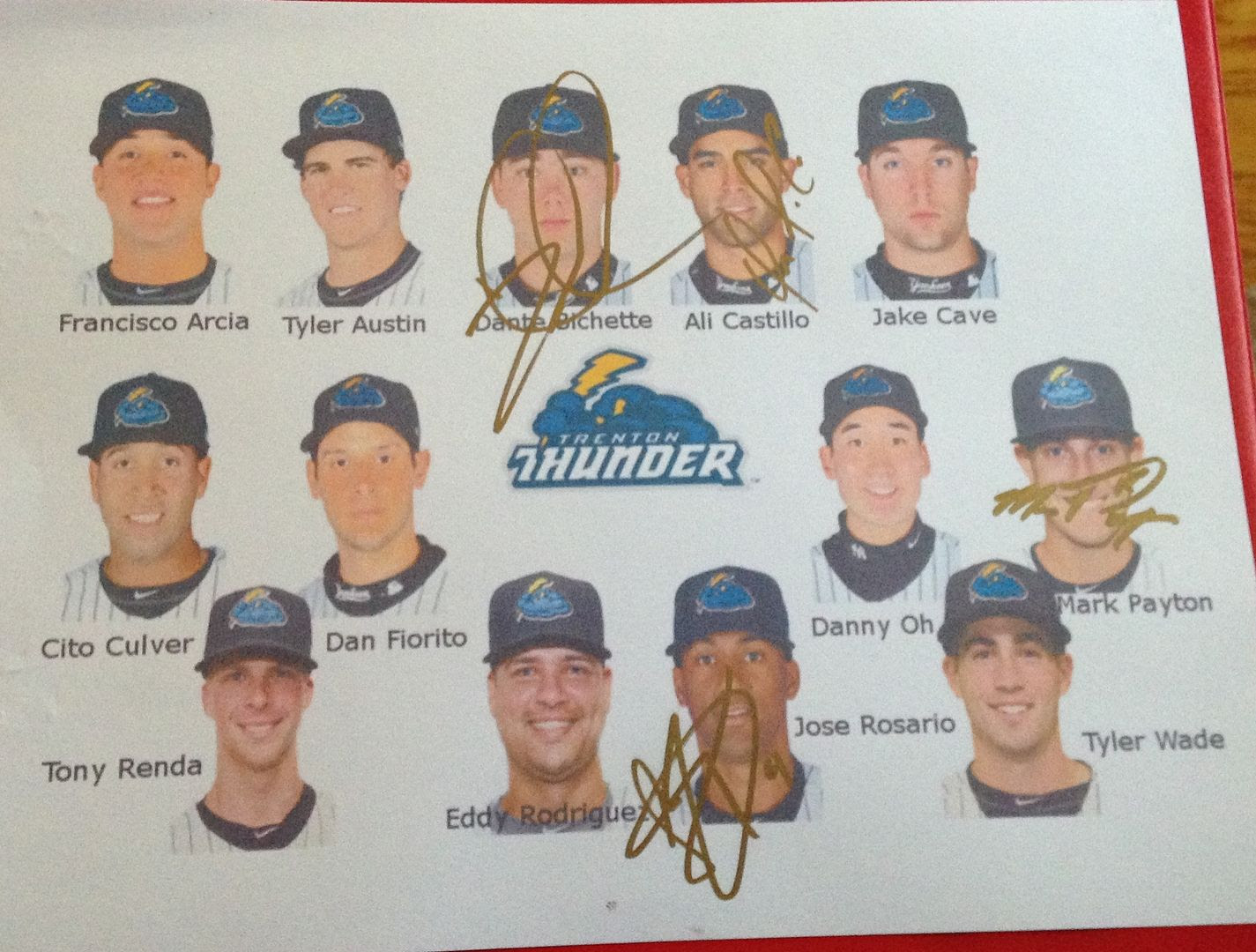 Dante Bichette, Ali Castillo, Mark Payton, Jose Rosario / Trenton Thunder
When the Trenton Thunder aka Little Yankees were coming to town at the end of the season all of the cards they had in the Top Prospects set were of players who had moved up to Triple A.   I always liked that the Rock Cats had a program with the players in it which they could sign and wished they had something similar for the visiting team.   So I decided to make one and this was the result.  This is only for the players who are non-pitchers so it was hard to tell when getting someone to sign who they were and then if they were a pitcher or not.  This also took place in between a double header in which Trenton lost the first game so a lot of the players were angry.  Oh well, it's not like I'm a Yankees fan anyway.  This was more of an experiment- a test before trying out the real thing on the B-Mets and then next season doing this more as well- so I wasn't too bothered by the results.  Next season I'm likely going to put the players on sheets so they look like baseball cards but then that's only going to allow for nine players per sheet so then it gets tricky jumbling all the pages on a clipboard.   I am open to suggestions at this point though.   It is also worth noting that Jose Rosario took the Sharpie by the tip and got gold all over his fingers, to which he exclaimed something in Spanish. 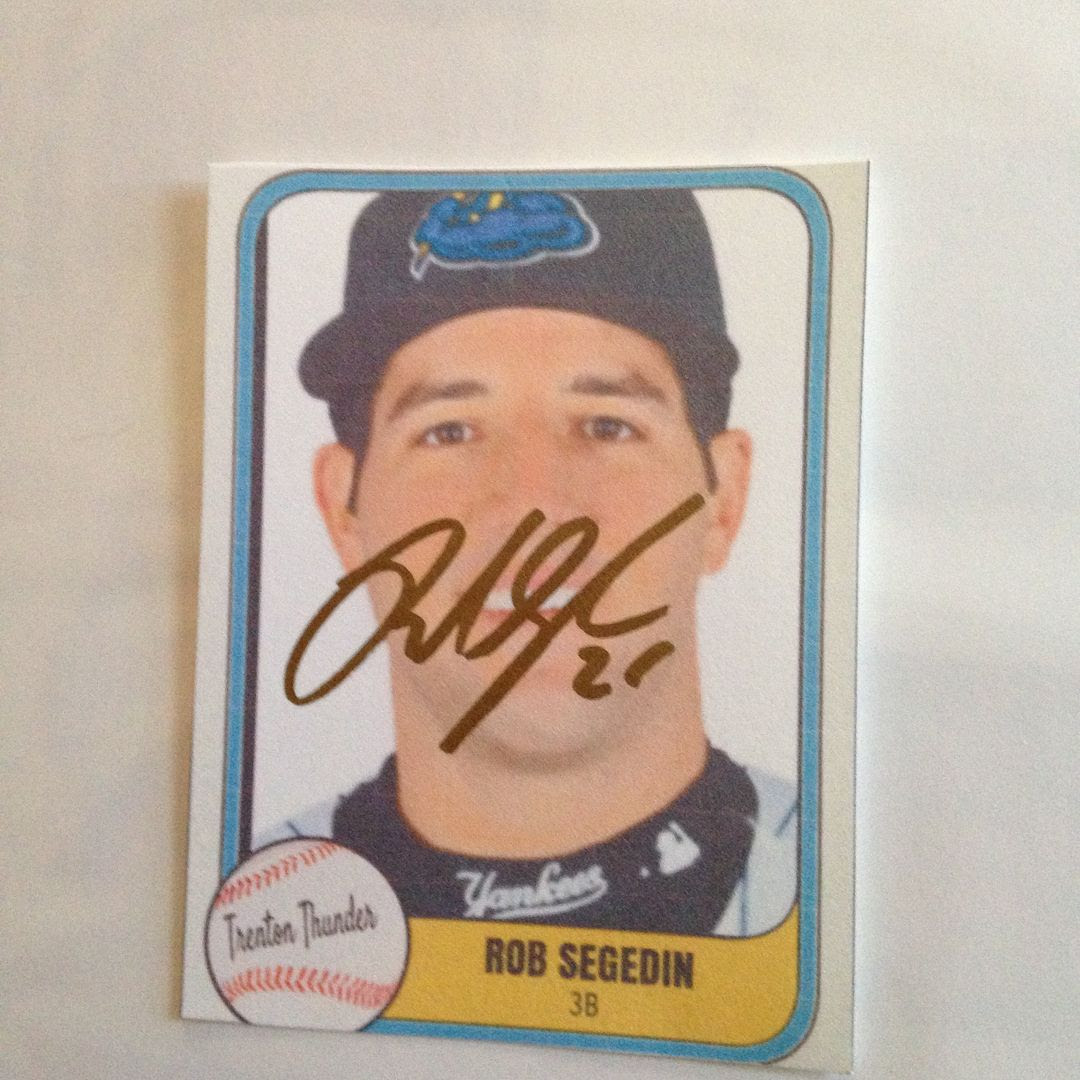 Rob Segedin / Trenton Thunder
When I was going over the Trenton Thunder roster Rob Segedin was on the disabled list.  He was activated for the first game in this series though, which was rained out, so when I saw him in the lineup and knew we'd go to the next game and he wasn't on the sheet we made a baseball card just for him that he signed.   It's a strange feeling to have someone sign a home made baseball card but I like it.  It is definitely something I want to do more next season with better photos which are my own and glossy printer paper. 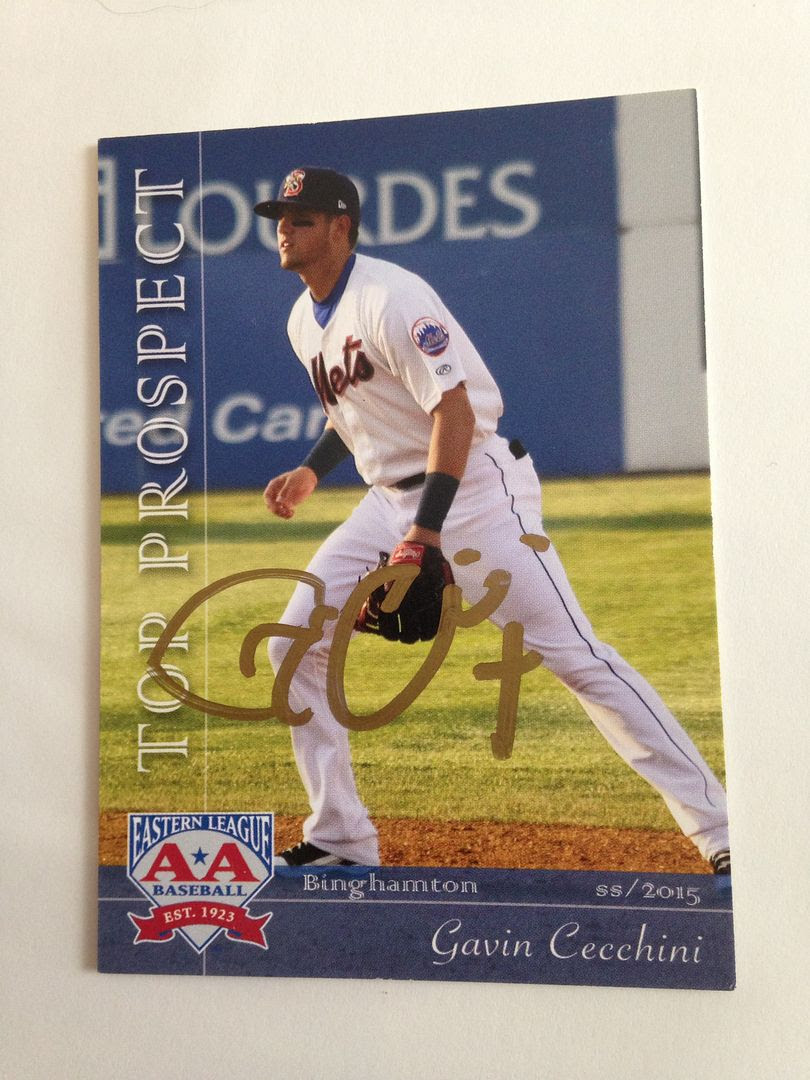 Gavin Cecchini / Binghamton Mets
It took me a while to get this card signed because I had it with me at the first Rock Cats/B-Mets series but he said he would only sign after the game and I never made it over to the visitor's side in time after the game.  This time, after their Sunday game, we stuck around and it was one of three items he ultimately signed for us. 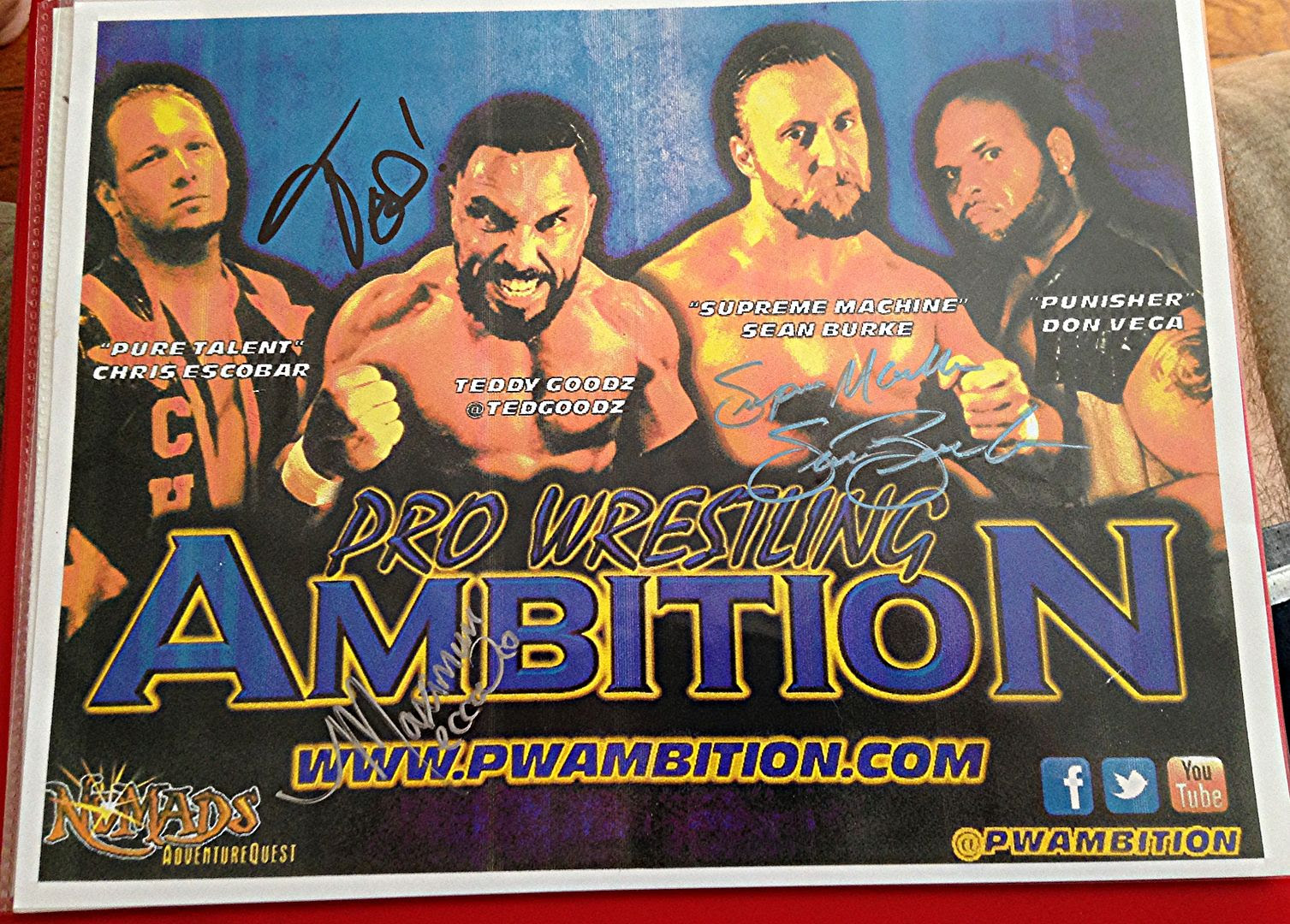 Pro Wrestling Ambition
Not the opposition per se, but Pro Wrestling Ambition had some wrestlers present during the Saturday night Rock Cats game against the B-Mets (8/15/15) and so they had these pictures out and who was I to refuse when they asked if we wanted them to autograph one for us? 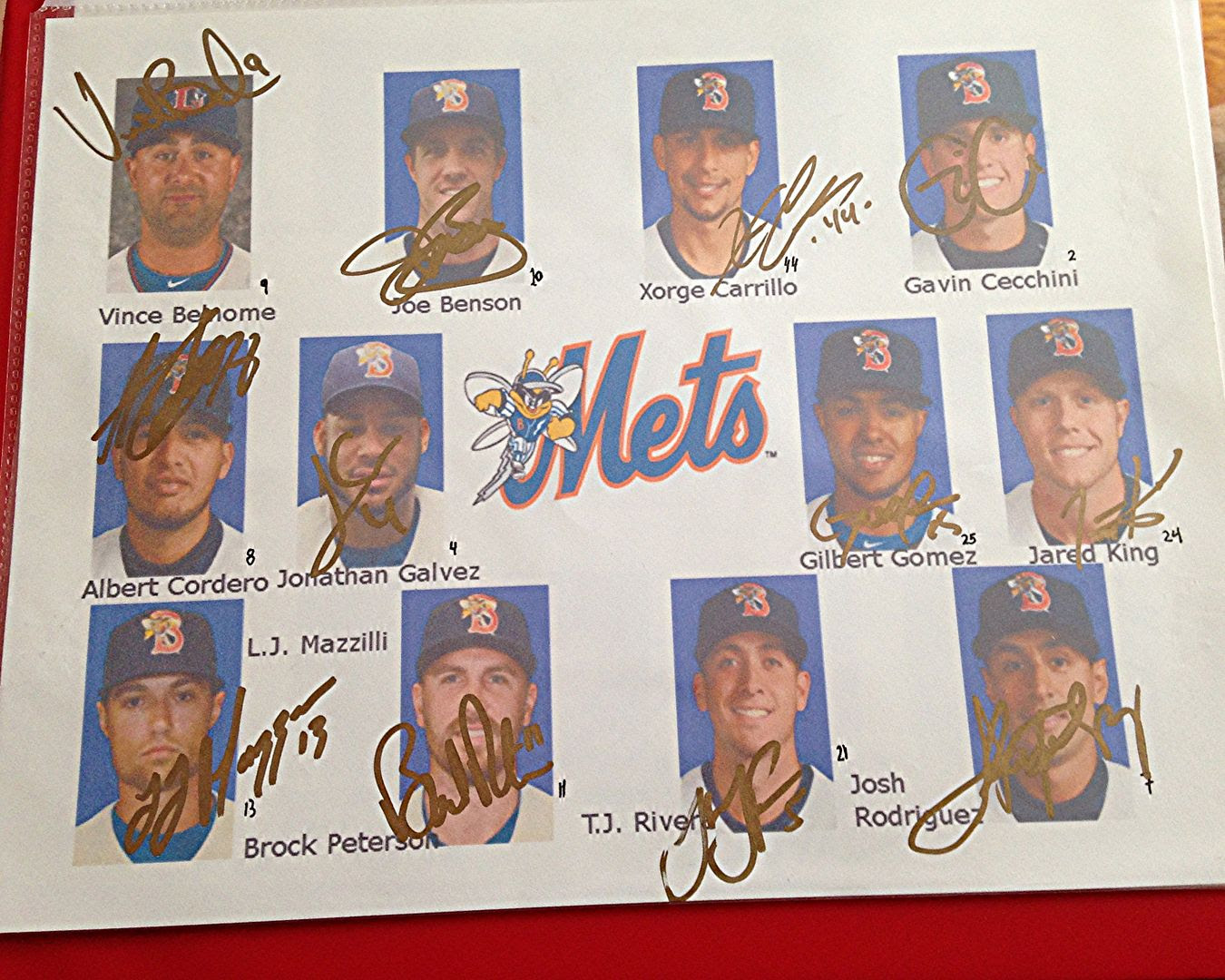 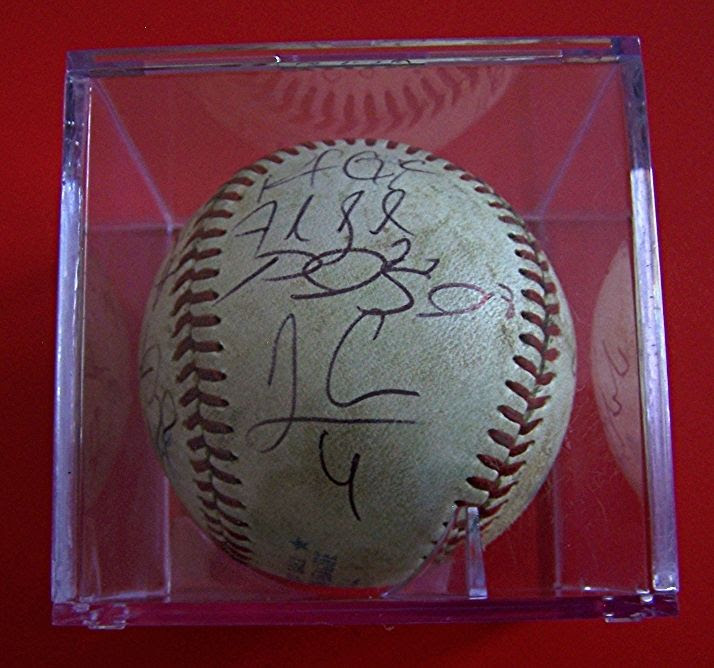 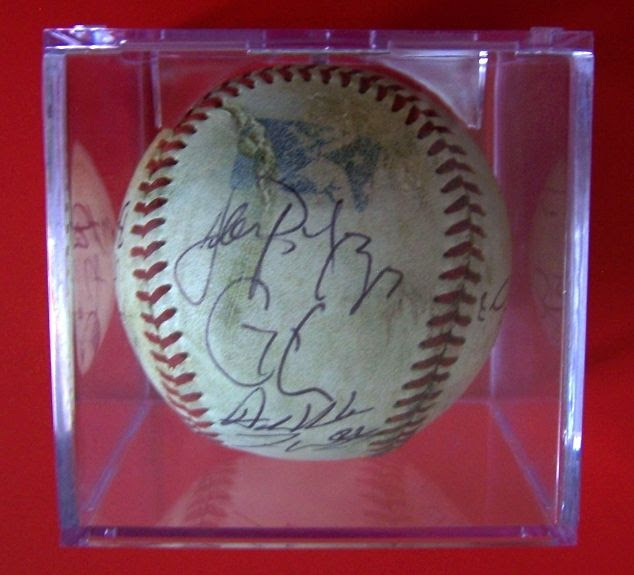 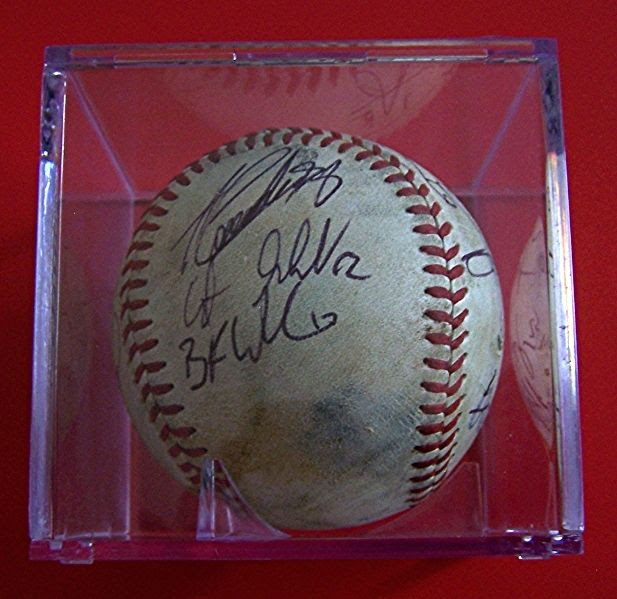 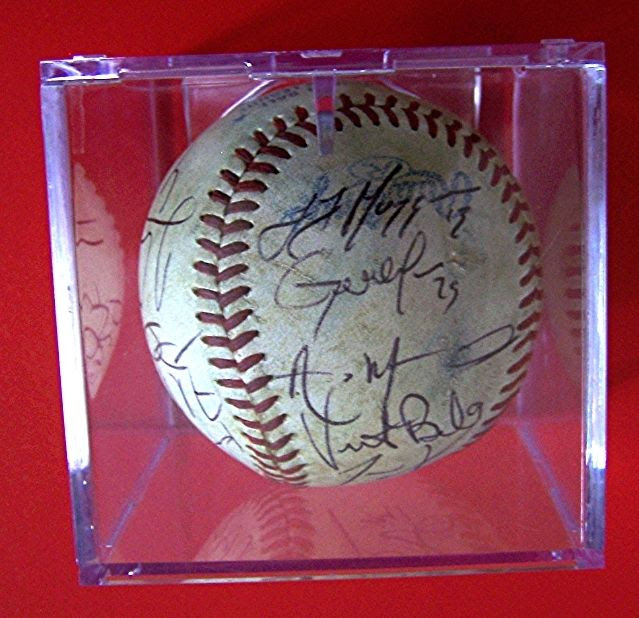 B-Mets Baseball
This story can easily either go with the above player sheets or the third review from the Rock Cats-B-Mets game which was from 8/16/15 and was Game 24 overall.    This is a list of the signatures: 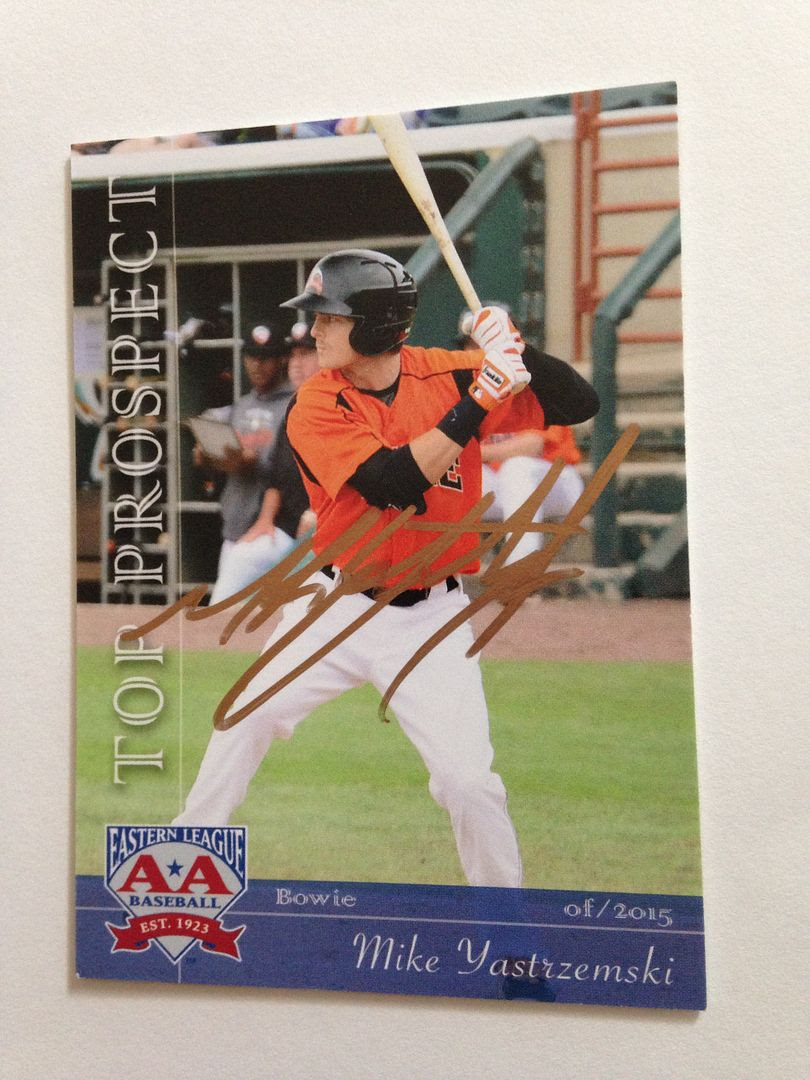 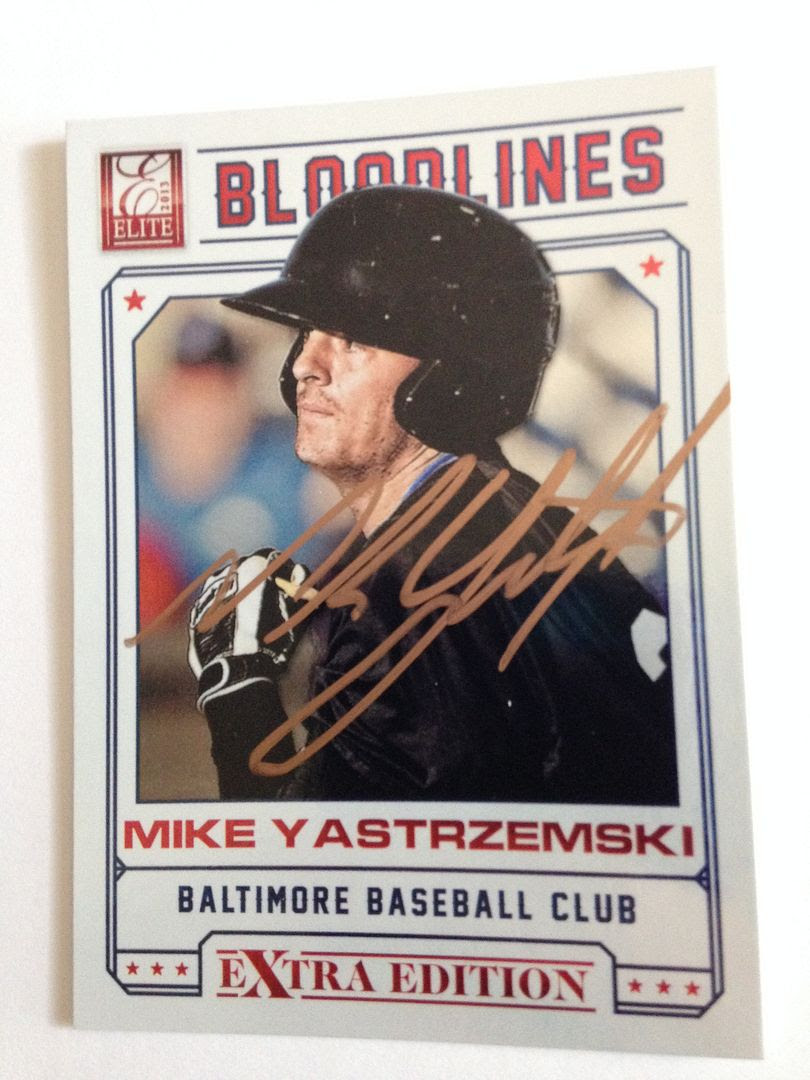 Mike Yastrzemski / Bowie Baysox
These were both signed before the 8/24/15 Rock Cats-Baysox game.  Mike Yastrzemski was very nice and signed for many children as well.   The Top Prospects card came in the set but the Bloodlines card was purchased from eBay prior to the game because I thought it looked cool. Bowie Baysox Player Sheet
This was signed before the 8/24/15 game like the cards above it.  For any clarification the players are (from top to bottom, left to right)
Glynn Davis, David Freitas, Corban Joseph
Quincy Latimore, Trey Mancini
Tucker Nathans, Garabez Rosa, Chance Sisco, Brandon Snyder 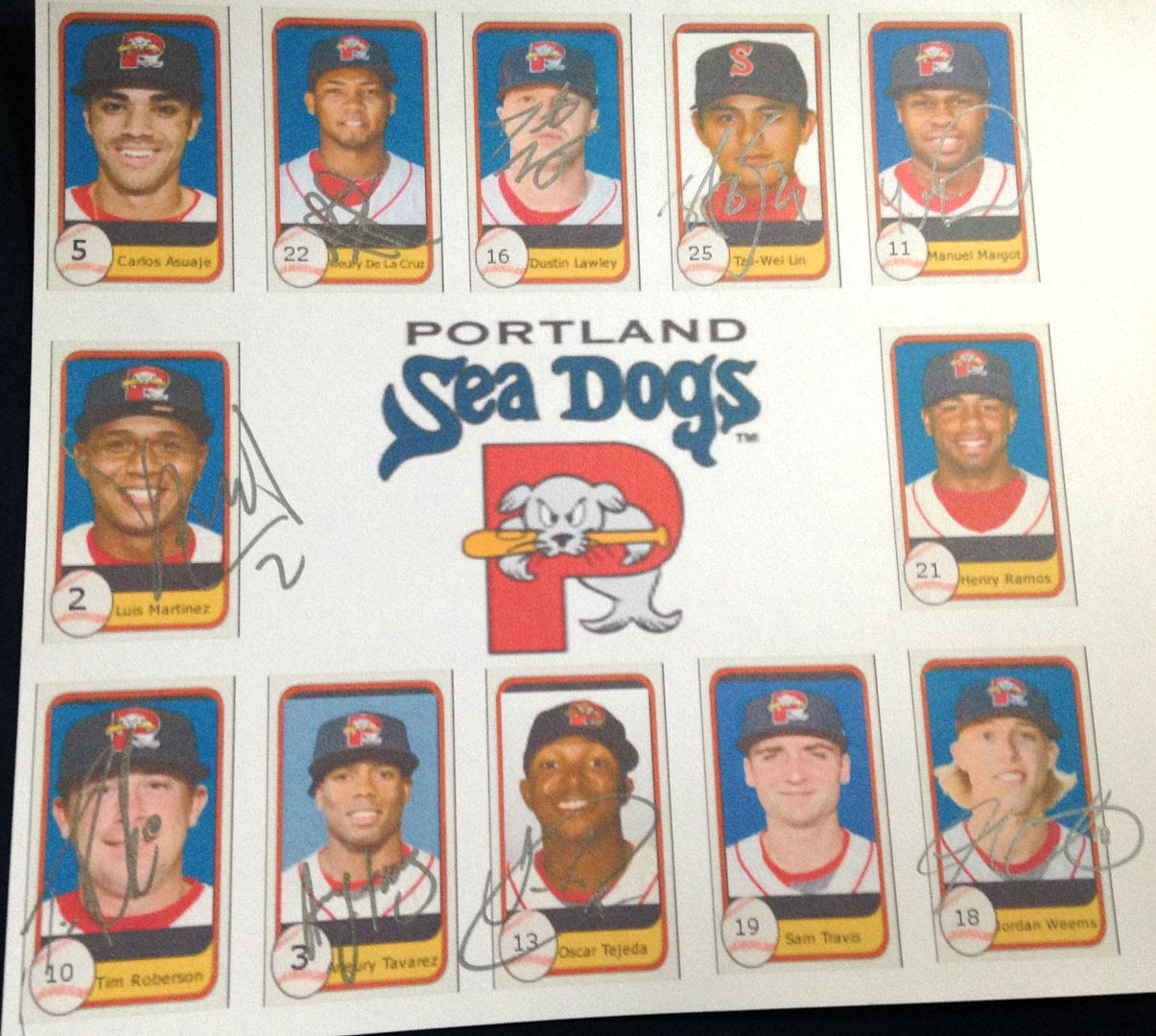