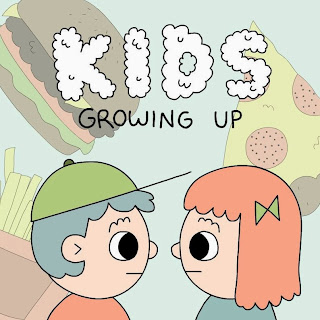 When I first heard the band KIDS it was because they did a split with the band Sledding with Tigers, whom we all know that I love.    After searching Band Camp for them, I realized that a lot of bands have the name “Kids” or at least the word “kids” in their names.

These seven songs are filled with punk undertones and unisex vocals (Yes, I will now just begin calling male/female vocals “unisex” because why not) that trade off in a rather nice way.   There are keys that remind me of something between Casio and an organ.

I also can sense something melodic in here, something almost emo, something like Saves the Day.  With the keys, I’d certainly attribute this to something such as The Anniversary but I haven’t heard enough of that band to say so.

Overall, this reminds me of the first time that I heard Straylight Run only the songs by KIDS deliver in rapid succession like a flurry in an MMA fight.

http://sandiegokids.bandcamp.com/album/growing-up
Posted by Joshua Macala at 11:03 AM