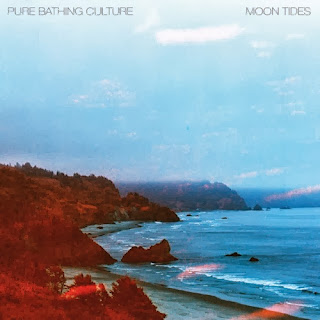 These days it seems like bands release music as a collection of songs more than anything else.  If an album has a quality to it where it flows, as an album, then it most likely is some kind of concept album.  Bands pluck tracks from random and release them as singles to preview said album.

But not Pure Bathing Culture.  They offered up two songs from “Moon Tides” prior to its release, and seemingly appropriate somehow they were tracks numbers 1 and 2 on this album.  While I realize that bands rarely give away the last song on their album as their first single, it makes as much sense to me as a movie giving away its ending in the trailer.

Aside from the fact that I now fully support the notion that all bands should release singles in the order in which the songs appear on the album or not at all, this is just some generally good music.  It’s acoustic dream pop with a drum machine.  It’s has an 80’s female feel to it, kind of like Sinead O’Connor only not.

It also, in the most amazing way possible, reminds me of Phil Collins.

Songs such as “Twins” and “Seven to One” stand out as my favorites and though they are not quite pop in the typical sense, after listening to this album enough you will find them getting stuck in your head.
Posted by Joshua Macala at 6:17 AM