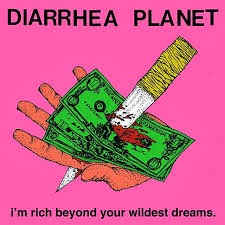 The thing about Diarrhea Planet is that “diarrhea” is a funny word to say.  It really shouldn’t be, as it’s the actual word you use when you can’t stop pooping (Just pick up a bottle of Pepto and see for yourself)   It seems like there should be a more scientific word and diarrhea should be slang, doesn’t it?

Also, as if that isn’t enough to make you giggle, the band is called Diarrhea Planet, which means it’s an entire world made of runny shit.   Oddly, on some level, this also seems to be accurate (Just click on Yahoo News stories)

The music, however, is a garage sort of punk rock sound which brings to mind NOFX on a grand scale and on a smaller scale Jughead’s Revenge, which is quite an accomplishment in this modern age of music.  So, yes, laugh at the name, but do not pass up on some most excellent music.
Posted by Joshua Macala at 11:57 AM