Within the opening notes of “Savage Audio Demon”, you know you’re in trouble.   The rock starts kicking in and I’m taken back to a time when metal bands didn’t sound like Disturbed but rather Black Sabbath. 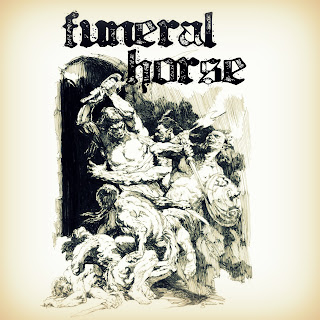 The first song is heavy, entrancing and a modern metal masterpiece.    Now, I am by no means a metalhead.  I like all genres of music, finding bands that are both good and bad in all aspects of the musical spectrum.   I’m not certain I could survive another five songs of that nature, nor could an actual metalhead, but the more important factor is probably that if Funeral Horse were to try to duplicate that song or improve upon it in the second track I don’t think that they could.

What comes to follow will kick your ass pretty hard.   The slow, almost stoner rock I heard in the first song is quickly erased by elements on punk rock on the second track.  I’m hearing less hypnotizing in this song and more TSOL.

The third song comes in even heavier, and well, you can see where this is going.    From Sevendust to Helmet, there are comparisons to be made, but what you mostly need to know about Funeral Horse and this album is that on the very first song they create an opus which could outdo a number of full length albums by other bands claiming to rock.

If they can do that on their first song alone and the songs only then get better as the album progresses, just imagine what your ears are in for.
Posted by Joshua Macala at 9:59 AM