If you have ever been on Raised by Gypsies before, you will know that I am a fan of [aftersun].  After a “Pain Sounds” EP and a single leading into this new album of eight tracks, I can’t say anything bad about this band because they never give me a reason to say anything negative. 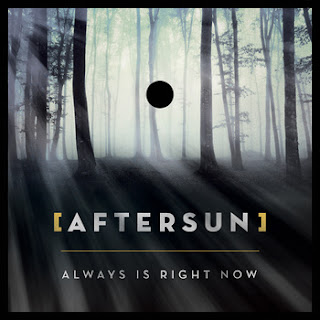 While “Always is Right Now” had “Last Night” as a single released prior to this album, the song “Don’t Touch” also makes its second appearance, so really, with these eight songs, you’re six songs you probably haven’t heard before now, but one was made just for this, so, you know.   You’re still paying a dollar a song and considering all of [aftersun]’s music up to this point has been at a Name Your Price Download, don’t complain and just pay for it.

This duo takes me back to a time when there were actual laser shows during rock concerts and when people played keytars.    It might just be due to my family influence, but this does remind me a lot of that episode of “Phineas and Ferb” when they create Max Modem—it just has that totally ‘80’s new wave vibe to it.

But you can call it synth pop or any number of other things along those lines.   The fact is, this is [aftersun]’s best release to date and it just makes me feel like these guys are about to blow the future wide open.   (Yes, covering “The Future’s So Bright I Gotta Wear Shades” would be highly appropriate)

The first track has some lovely female backing vocals on it, which made me question whether or not they’ve added a third member, but alas, she only appears on that one song and it is indicated as such in the linear notes.

After a great opening number and then going into the song you should already know, “Last Night” (which still isn’t a Strokes cover, leave that to Suzy Blu thanks), we’re treated to “We’ve Never Met” and “I’m On My Way”, both of which are songs that if you don’t like then, mister, you are no friend of mine.

As of my writing this, “Always is Right Now” is available as far as I can tell only as a digital download.   As much as I love cassettes (And I love cassettes), I’d really like to see this album on vinyl.  I’d like to see the record make its way to some club and have it spinning and mixed by some underground DJ.   That seems somewhat fitting, but so does putting this on a cassette and then listening to it in your Walkman, so there you go.

And also, I am fully aware that DJs can DJ using the powers of the computer and playlists with iPods and what have you, but I just like the idea of vinyl.
Posted by Joshua Macala at 8:39 AM