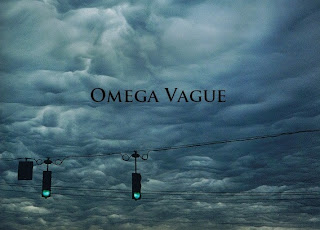 I’m not sure why I ever feel the need to point these things out, but for some reason I do, so here goes.   On the album titled “Four”, Omega Vague has song titles that follow the pattern of being titled “.01”, “.02”, “.03” and so on.    It’s kind of like them being untitled only not.   This has lead me to want to explore more the concept of untitled songs and self titled albums, to see if they really are worse than some of these names some people come up with these days.

In any event, Omega Vague is all over the place on this album, but can stay together somehow.   I really do believe that this album plays out like the soundtrack to Omega Vague’s life, if only because it’s not that close to any specific movie I can name.

The first song has a slower paced sound of Deftones and Coheed (Yes, really), while the second and third turn into FNL with a drum beat that’s almost ambient.    The fourth song picks up into that melodic Linkin Park sound that I have trouble placing because it’s good and nothing Linkin Park has ever done has been good.

Lou Reed comes out on the fifth song and I begin to think this might be the soundtrack to Trainspotting, but who knows.   I refuse to state that definitively because of the drug correlation.    Then on track six we turn into a sound clip about Truth or Consequences, New Mexico, UFOs and demons, which is kind of interesting.     Seems like not calling that song “Roswell” or some variation on that was a missed opportunity.   Though, would it really have been better had it been named “All’s Well That Ends Roswell”?   Probably not.

From there on out, we get into more FNL, some X-Files and also the piano parts to go along with them.   The last song doesn’t start for a minute and a half, so I feel like it’s supposed to be the hidden song on the album, If you will think of this as a CD.

The last song is actually a quite great note to go out on, an acoustic number that reminds me of Pink Floyd’s “Wish You Were Here”.   So, I mean, from radio and whatever rock to classic rock, this music has pretty much all of the rock bases covered and I do enjoy it a bit.
Posted by Joshua Macala at 8:38 AM