<1> “Adalides de la nada” – Whoa, it’s a party band.  What’s all this screaming about?   Eh, here come the guitars, so who cares.   These lyrics aren’t in English, but it kind of sounds like Green Day otherwise, which is awesome.   Near the two minute mark we get a nice breakdown, and this is just some good old fashioned Nitro Records style punk rock.   The screaming coming through now also has a great sound to it.   It’s not hardcore screaming so much as the anger of punk rock coming out. 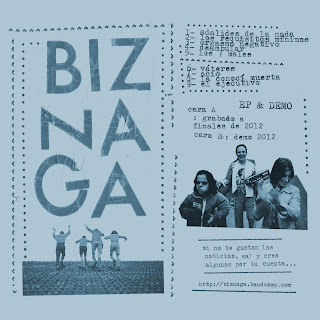 <2> “Los requisitos m+inimos” – This song is coming off somewhere more between the Vandals and a ska punk band.   No horns yet, but it has that guitar riff that makes you think of ska.   The first song was around three minutes and this one appears to be shorter.   We also get somewhat nice surf solo there.   Yes, this snotty punk song is capping off around the two minute mark.    And then he laughs…

<3> “Orgasmo negative” – And we quickly head into the third song of punk rock bliss.

<4> “Deambular” – This is beginning a little bit more like the Mr. T Experience, but it’s still going fast enough.   Then the vocals kick in and I’m thinking Vandals again.   These are some pretty short and sweet punk rock songs on the whole though.  I really like them.   It’s like Sex Pistols meet La Bamba.

<5> “Los 7 males” – The second longest song is also the last.  This has that great punk sound musically still shining through, and now the vocals are almost screaming a little bit more in the verse than they were before.   I can hear bits of older Blink 182 in here also.
Posted by Joshua Macala at 10:17 AM