MP3 REVIEW: NATURAL VELVET “Salome With The Head of John The Baptist” 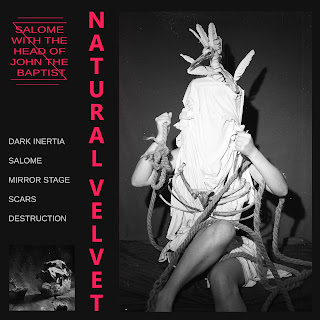 When these songs first come on, all of the feelings I have toward female based music come rushing out.   To an extent, I hear Hole in here, but only in the best possible way.   I hear a bit of Delta Dart as well.   And mostly, this could be summed up as Blondie meets Sahara Hotnights.

But then the more I listen to it, the more that I realize this isn’t just something to be compared with music that exists in this all female world I am building up for myself musically.   Though the original lineup of Smashing Pumpkins was ¼ female I still hear some of their band in here musically.

And it just goes on like that.   This band, Natural Velvet, doesn’t have this whole female vibe to them, though if you like female music and are trying to build a base upon such as I mentioned that I am earlier, then yeah, you’ll have no problem with this.  I even believe some people who do not usually like listening to female fronted music could have this be an exception.
Posted by Joshua Macala at 10:05 AM