SPOTIFY REVIEW: CHVRCHES “The Bones of What You Believe” 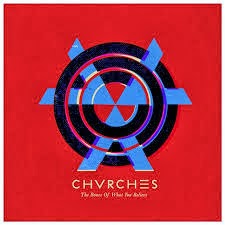 First off, there is a deluxe edition of this album on Spotify and of the bonus tracks it contains one is a remix by We Were Promised Jetpacks.  That almost make this worth listening to in and of itself.

CHVRCHES has a synth pop vibe that musically comes much closer to pop than anything else.  At times I’m waiting for her to starting belting out “Cherish is the word I use to remind me of… your love…”, but it also could be as close to a modern female pop star as someone such as say Kelly Clarkson or something.

The difference here is that the singer for CHVRCHES is not afraid to drop an f-bomb.  And it’s not really something that is necessary; she seems to do it when it’s least expected and so it’s not really appropriate.   Rather than out of anger, such as “Hey, eff you!!” it comes out in ways like “What the fuck were you thinking?” which is a line that could just as easily go through clean.

So it’s funny because as much as I think of this as being pop, it can’t be on the radio without some edits and the f-bombs come out so naturally that I’m almost thinking of this as being the anti-pop or something.  It’s quite interesting and worth a listen if you put your dance shoes on.
Posted by Joshua Macala at 5:00 PM