MP3 REVIEW: Under The Wildflowers Volume 1 – A Lamppost Records Compilation

<1> The Cherry Wave “Under Dull Grey Skies” – A flurry of fuzz begins this track.   The vocals kick in and it’s like an amped up version of MBV.  Really, I only downloaded this four song EP to listen to because I love The Cherry Wave.   This song is in no way disappointing me.   It’s like R.E.M. on acid.   So… much… static. 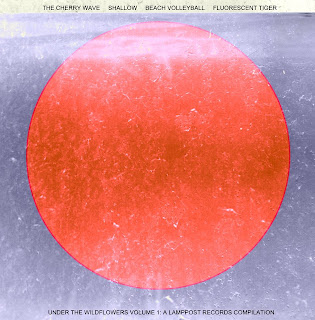 <2> Shallow “Alternative” – This song has a decent amount of static in it, and reminds me a little of something like Hot Water Music in the verse.  For the chorus, it gets more melodic.   It could almost be an emo song if it wasn’t for all the static going on in the verses.   The chorus is nice though.  A little bit of Dashboard coming out and I don’t even know what else.

<3> Beach Volleyball “First Floor” – And the drums bring us into some fuzz.   Is Lamppost Records an all fuzz label then?  Because that’s pretty cool if they are.   This song is a bit slower than the two that came before it though.   Even with the drums into the chorus kick in, this has got that slowness to it that just makes you mellow and chill.   It’s a nice change of pace from the two, but also a genre I enjoy as it borders on the line of stoner rock.

<4> Fluorescent Tiger “Nothing But Blue Skies from Here On” – Check the drum beat and we come in with a wave of distortion.    It’s like a sped up Mazzy Star.   I do feel as if vocals are coming through, though they seem to be quiet and thus getting drown out by the guitar fuzz.   And now the music just kicked in really heavily, so forget what you heard or thought you heard.  This is a great big static mess and I love it.   It’s also going on in somewhat of a drone way.
Posted by Joshua Macala at 8:06 AM