As I dive into a new type of wrestling action figure, I need to note two things which I will point out only in this review and then try to avoid repeating in the next five reviews coming after this.    These Ring of Honor action figures were all purchased through Wrestling Super Store (WSS) though they were made by Figures Toy Company (FTC) though the two are related so it doesn't matter who I refer to exactly, but sometimes I might use the initials of one and not the other.    Also, I purchased a deal that got me all of Series 1, titles and the ring for $209.99 and then it was about $20 to ship.    If you are still able to take part in this deal I do recommend you do so because it is well worth it.

When it comes to this new line of action figures for Ring of Honor (which I could seemingly write about forever) the one figure in this first series that I was thinking about passing on was Kevin Steen.   I have Kevin Owens as a Mattel figure and assumed I would put my Mattel figures together with these ROH figures, but since I got the package deal I ended up getting this Kevin Steen figure as well.    It's also one of those situations where I'd feel bad leaving only one figure behind and if there is any series to get all of them in it is the first one because maybe ten series or so from now I won't regret that decision.

The first thing everybody probably wants to know about these figures is the scale.  Kevin Steen- as made by FTC- is actually quite larger than Kevin Owens as made by Mattel, but I'm okay with that.   I don't really feel like I'm collecting this line of ROH figures so that they can interact with my Mattel figures (Though I hinted at that in the previous paragraph) but rather so that they can just interact with each other as well as the two other lines FTC is working on right now.    Someone once posted about this line that it would be similar to the Mattel Elite line and I don't think they meant to scale but rather in terms of quality.

Quality is one of the big sellers for anyone on this line- or at least it should be- as the figures themselves are just oozing with it.    Kevin Steen might seem to have a large head for his body, but have you seen the guy in real life?  I actually really like this head better than any of the ones Mattel has done so far in terms of likeness.   What's cool though is that Kevin Steen has a basic body where nothing is really painted and his t-shirt plus singlet are cloth.   This is what FTC means when they say they will be similar to Mattel Elite.

Some of the only experience I really have with action figure clothing in terms of wrestling action figures is with the old TTL Kurt Angle figure that had a cloth singlet.   I remember it getting stretched out and in a lot of ways just being too loose fitting for him after a while, but we are now many years into the future and technology has changed the game.    The singlet on Kevin Steen is so tight and form fitting that I'm hesitant to try and take it off of him, but it makes the figure look so much better than if he was merely painted.   The t-shirt is the perfect blend of looking correct on the figure while also being able to stretch to take it off.

Now, I have the Mattel Elite Bo Dallas figure- which is one of the only Mattel cloth shirts I can think of off hand that I own- and they have the velcro in the back of that so you can take it off and put it on.   I was looking for a similar way to take the t-shirt off of Kevin Steen and the other ROH figures but there isn't one.   I'm not sure how they make these shirts so form-fitting and yet so easy to get on and off without cutting them but I'm not exactly a fashion designer or anything either.   I tip my hat to FTC for this one though because it's just so right on it's scary.   (I've already told Quentin you take the shirt on and off the same way you would just in a smaller sense, adding to the life-like qualities of these figures)

Since this is my first ROH action figure review there will be points here which apply to the other figures as well (Such as the t-shirt thing) and another one of those is the packaging.   These figures are set in a way that you can take them out of their packages without destroying the packages and thus should you choose to do so you can put them back into their packages.   If I could be so blunt as to paraphrase one of my favorite bands: this is some next level shit.    As these are online exclusives it works as well because in stores any toy company- not just Mattel- couldn't really get away with this because there'd be too much theft (There is already enough theft at mass retail as it is)

I'm not really going to rethink the math of it all right now with buying everyone in the "big deal" that I got and all of that, but buying the ring, three of the four figures and one set of belts just didn't seem worth it to me when you could spend a small amount more and get double the belts and the fourth figure-- plus the satisfaction of knowing that you went all in.   Based upon that deal it seems as if it would be difficult for me to explain to you why this Kevin Steen figure is worth the $25 price tag but it's really not.    Mattel sells their Elite figures for around $20 but this figure is not only an online exclusive but in my opinion of a much better quality.

Kevin Steen is the flashback of Series 1, as he obviously was already in WWE when this figure was announced (Though technically I think the figure was announced first and then they still were able to go ahead with it because of that) and based upon that he might be the figure people want the least because not only can they get their Mattel Kevin Owens figures but they might only want to collect the current ROH roster.   However, based upon the details put into this shirt and singlet as well as the way his head has taken shape I'd say this is the best action figure of Kevin Steen (Owens) out there right now and if you don't have it in your collection then you have no idea what you're missing. 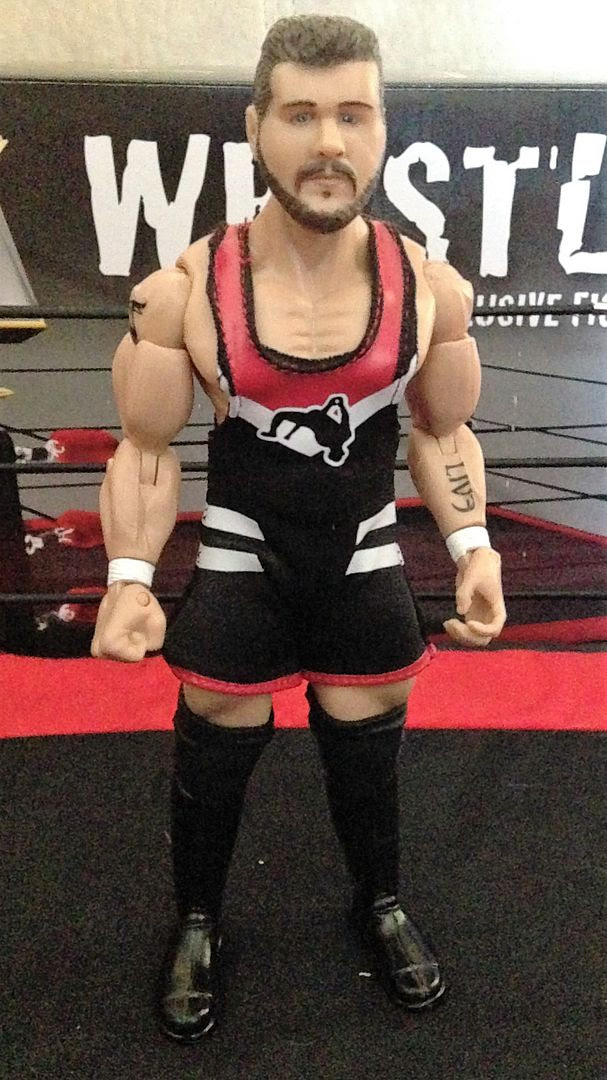 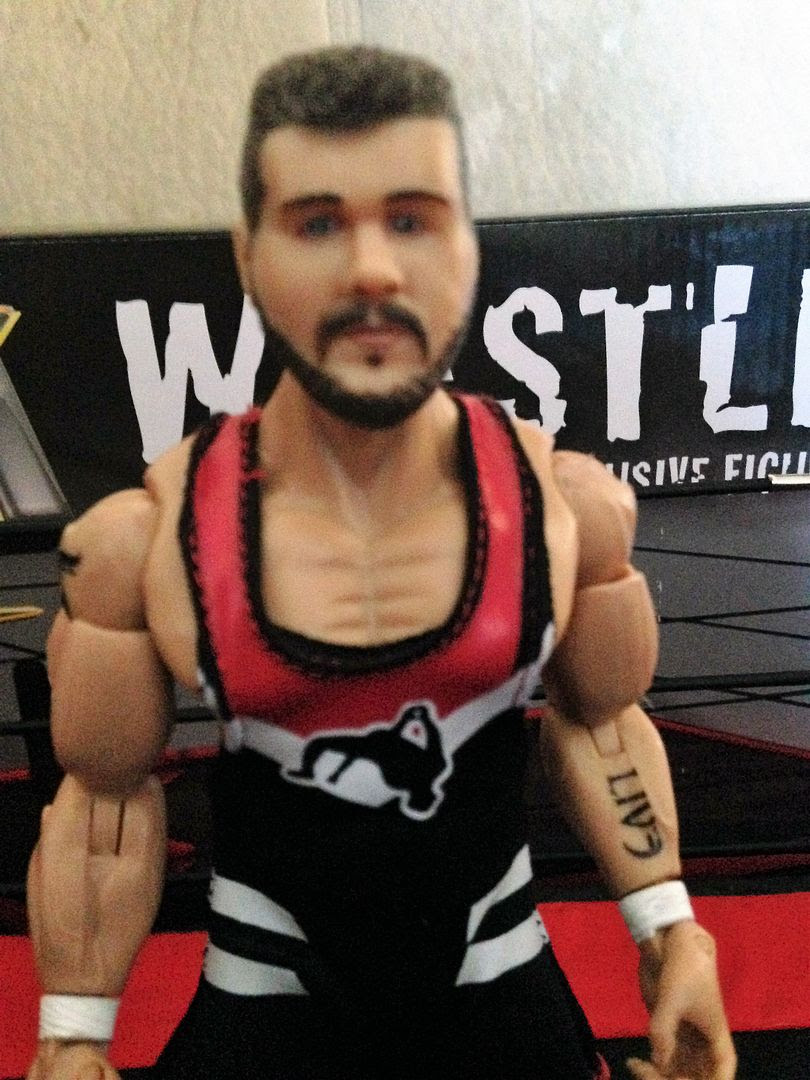 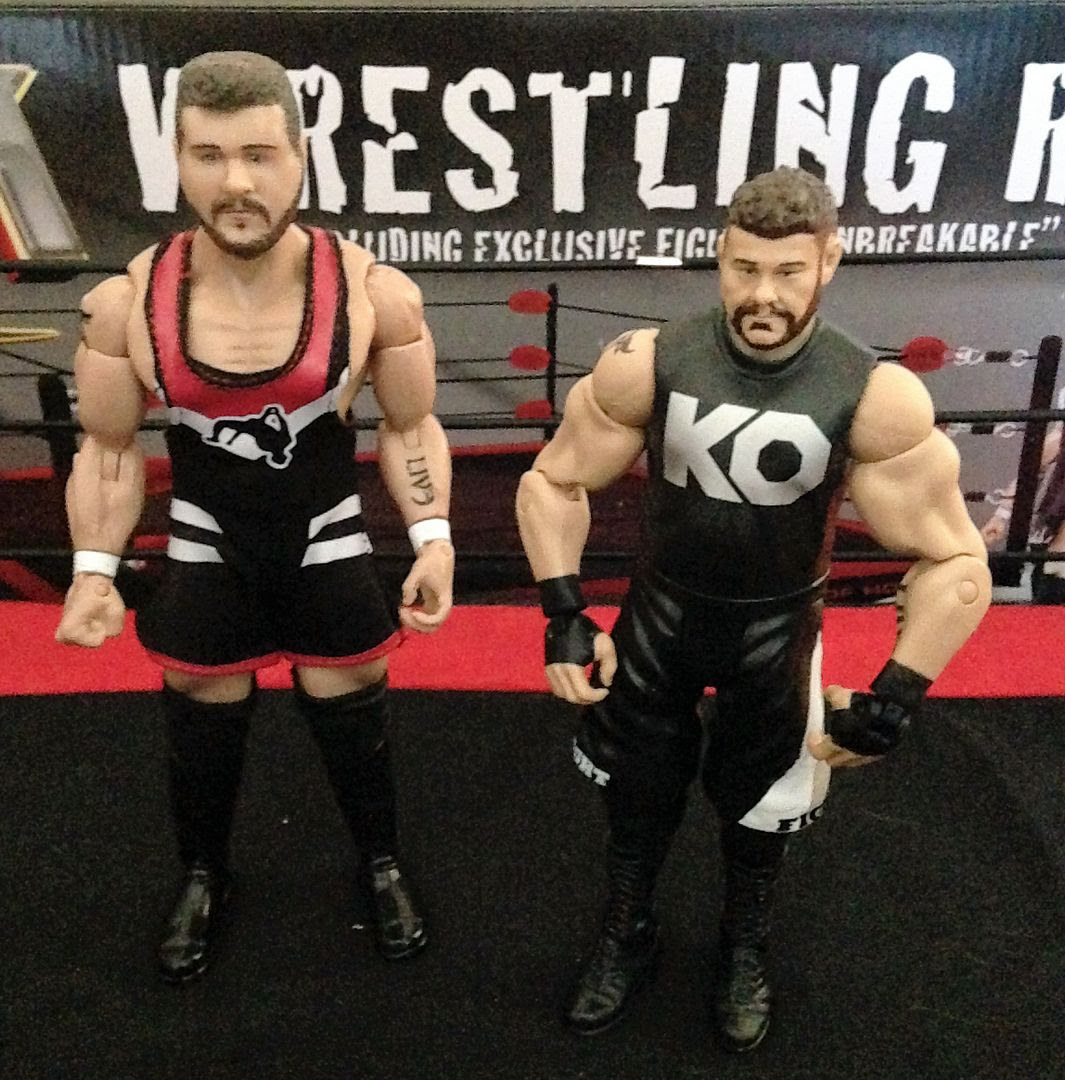 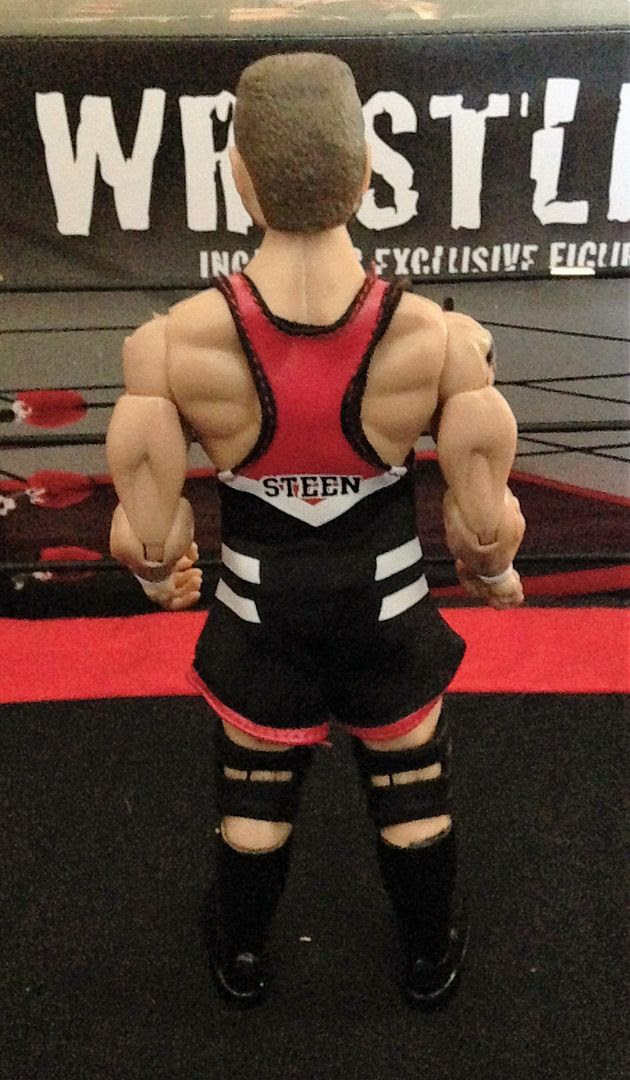 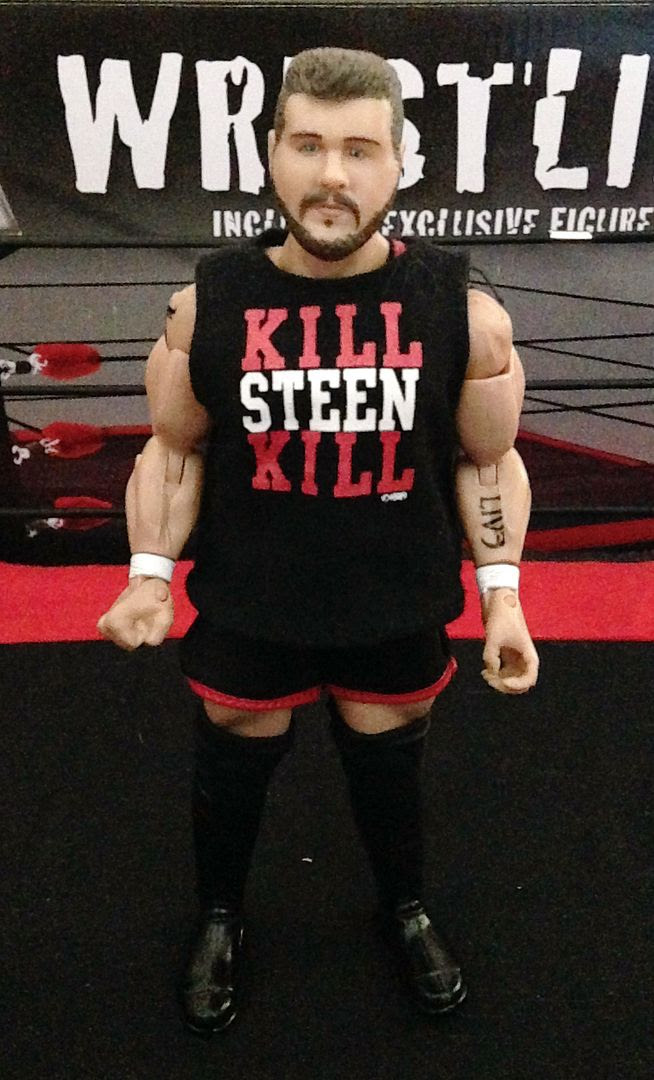 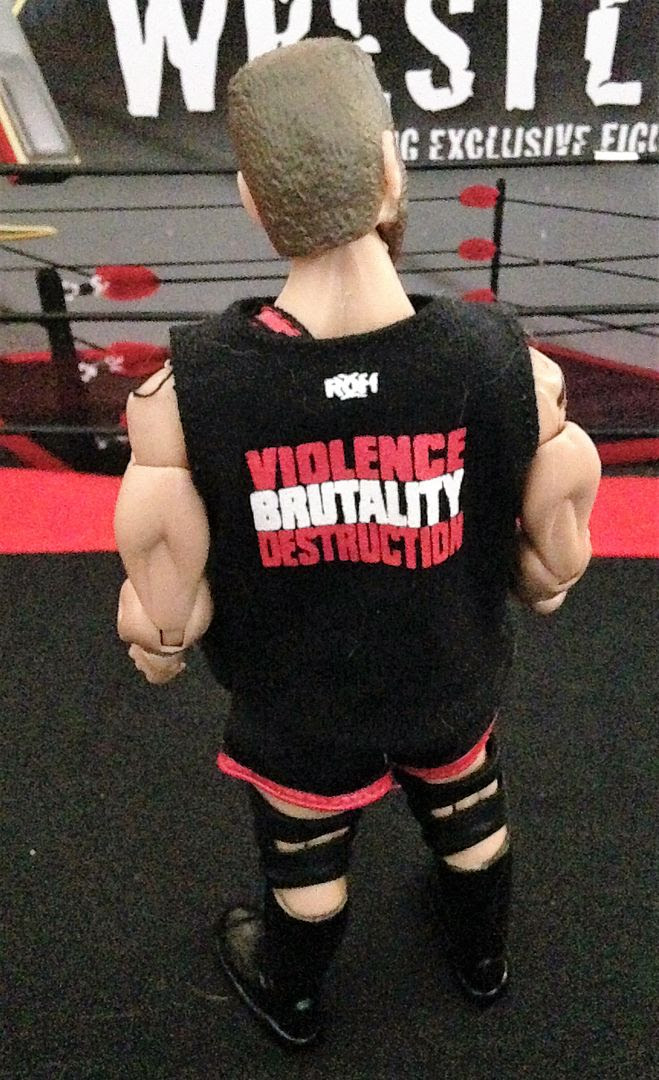 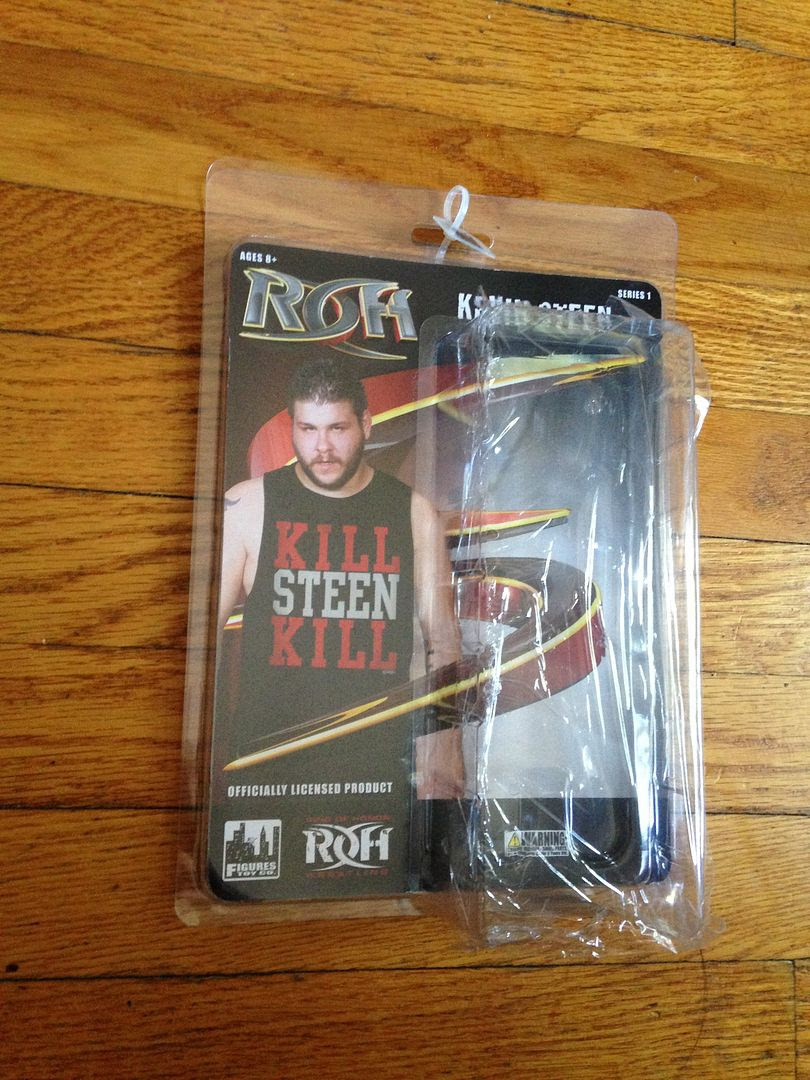 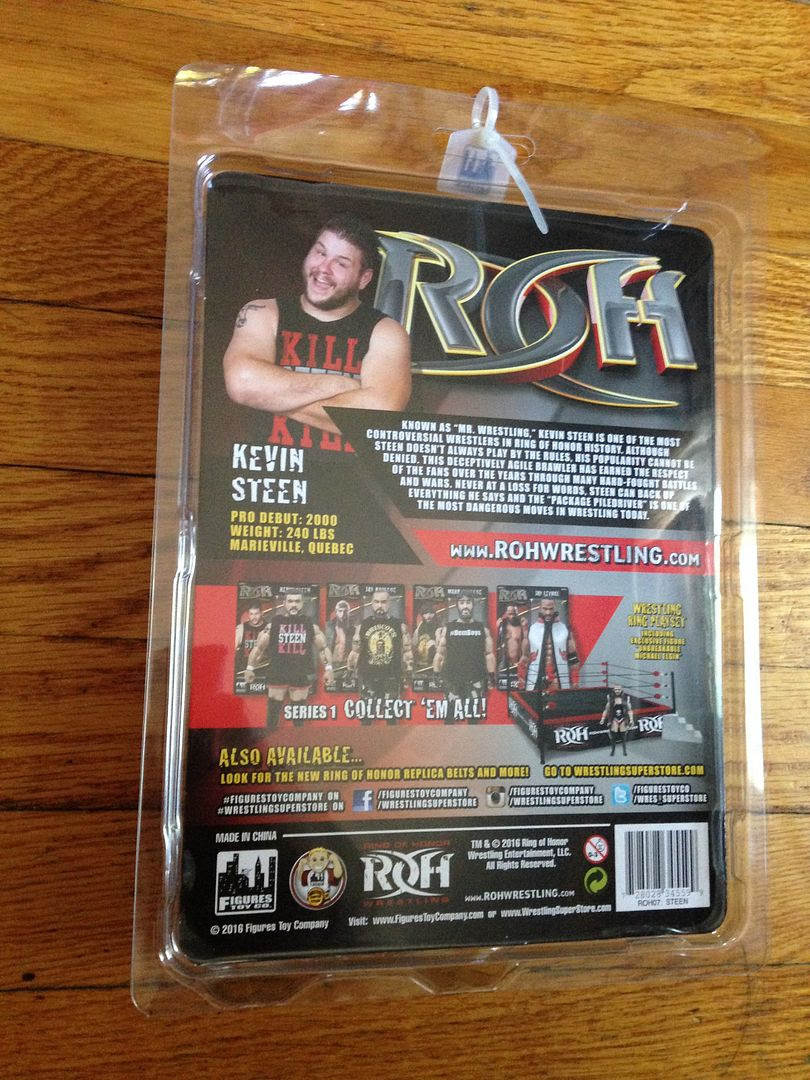 Posted by Joshua Macala at 6:37 PM