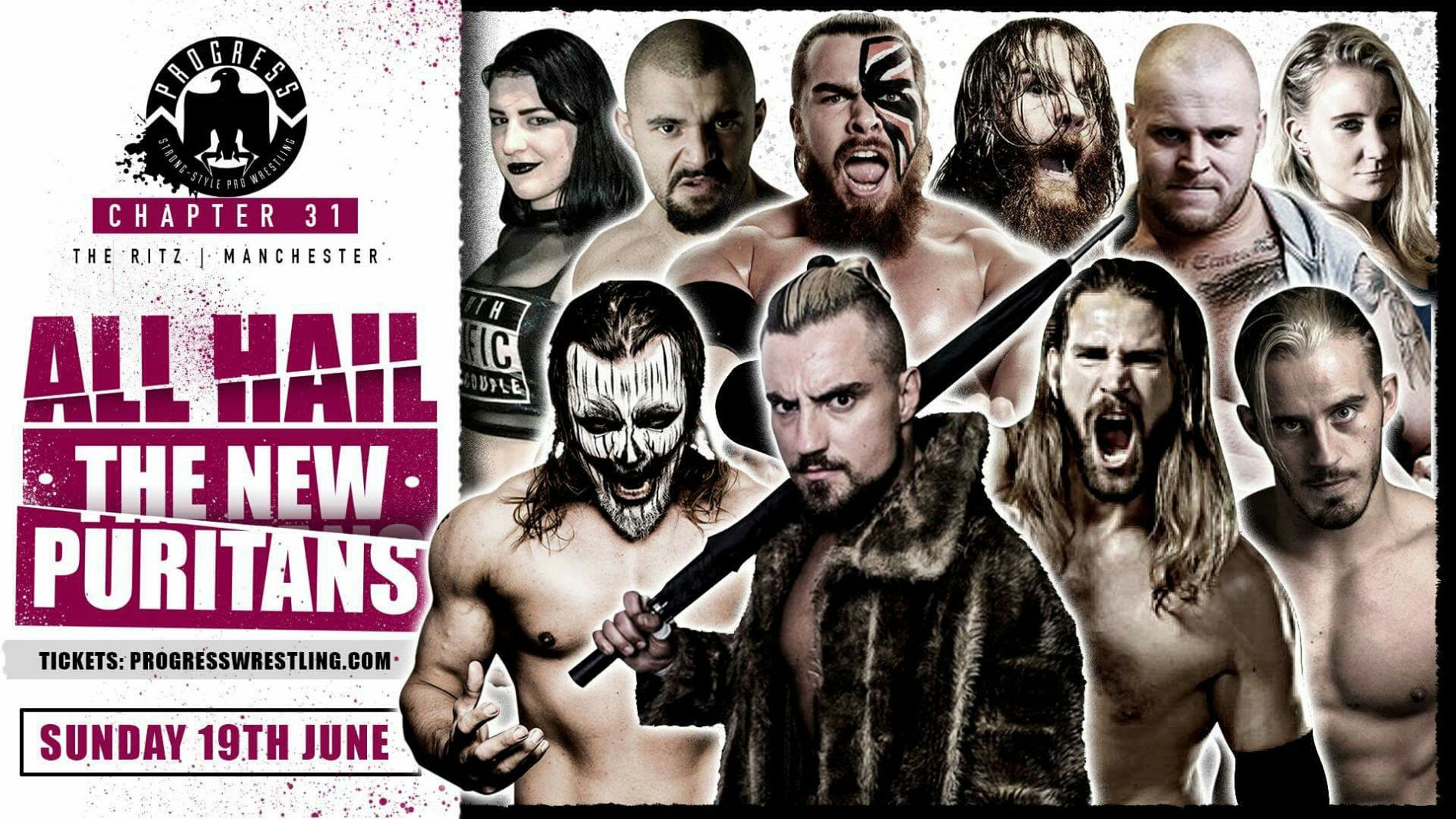 Following the Practically Progress In Every Way event came the Super Strong Style Tournament- which I didn't have time to watch because there are just so many other tournaments out there in Japan and Mexico at the same time I decided to go with no tournaments at that time because if I did them all I'd have no time for anything else.   Anyway, if you don't count that tournament then, yes, All Hail The New Puritans technically does come next and while I look at the card I can see some familiar names from PROGRESS Wrestling but the only match that really strikes me- on paper- as must see is the main event.

The show opened with some kind of tag team match on a points system and I don't know exactly what happened here other than the fact that Mikey Whiplash came out and became Rampage Brown's partner and then cost Brown the match.   So, look for Mikey Whiplash vs. Rampage Brown soon I suppose.   I'm actually beginning to like all four of these guys as characters though.   Mikey Whiplash looks like he stepped out of the Misfits while Damian O'Connor is "Big Damo", but he and Joe Coffey just somehow work together as Coffey has this Iron Man gimmick (like the Marvel character) and Rampage Brown is just a beast.   This was a rather good opening match.

The second match was Damon Moser vs. Zack Gibson with the stipulation that if Moser won he'd get his hands on Nathan Cruz but if he lost he'd have to be the servant of Gibson & Cruz or something.   Damon Moser overcame the odds to win in a hard-hitting battle and after the match he was beat down two-on-one so I can now only assume he will be even more upset once he gets his hands on Nathan Cruz.

In the women's match of the night, Dahlia Black took on Pollyanna and Pollyanna got a "Polly! Polly! Polly-fucking-Anna!" chant which was pretty cool.   Jinny came out and that Jim guy in charge told her something about how she couldn't interfere I guess.  I don't know, the house mic isn't really clear on this show so it's hard for me to figure out what everyone says into it (Zack Gibson was the worst trying to decipher) mixed with my general not caring and just wanting to see the action in the ring.    Pollyanna got the win and she'll probably be in NXT soon enough because that seems to be the way these days.

For the tag team title match, the challengers of The Dazzler Team took a really long time to get into the ring.   It actually kind of made me hate them- which is good psychology if they're supposed to be the heels (and I think they are)- and so it made me want to see The London Riots really kick their ass once The London Riots finally did come out.     The London Riots did get more cheers in this match than anything else, so I do assume they are the good guys or at least crowd favorites since they came out with weapons.    If WWE decided to hold some kind of international tag team tournament as they are doing for the cruiserweights, I would definitely recommend The London Riots being involved somehow.    Though, of course, everyone would argue some of the best tag teams would be under contract elsewhere and thus couldn't be part of it, so who knows.   (American Wolves are in TNA, reDRagon and Briscoes are in ROH, RPG Vice is likely under contract between NJPW and ROH and it'd even be nice for some reason to see The Hardyz enter as the veterans)   Both members of The London Riots were put in submission holds at the same time, but they both managed to get out.   There were a lot of near falls in this match and that kept it exciting-- one of my favorite tag team matches in a long while.    After a powerbomb, it was a spear which finally won The London Riots the match and somewhere out there Edge and Goldberg are both crying with joy.

Next up wasthe Dunne Bros. vs. FSU.   I'm curious as to why a "normal" tag team match is going on after a tag team title match, but then again I also wonder whether or not Mark Andrews is still in TNA.    I mean, we don't really see him a lot any more and I feel like since their tapings from the UK ended we haven't seen "Mandrews" or Jimmy Havoc and it's unfortunate.  Jimmy Havoc could have really helped TNA a lot, but oh well.   What do I know about wrestling, right?  Only been watching it since 1992.     I'll still enjoy FSU even if they come out to the music of Andrew WK.     There was a reference to the SSS Tournament in this match and it kind of made me want to watch it.   Maybe when winter comes and it feels like I'm perpetually indoors.    FSU won the match courtesy of Mark Andrews and what a tag team match this was.  Wow.  Dare I say I answered my own question as to why this came after the tag team championship match?

Up next Mikey Whiplash was back with little reasoning as to why he was fighting again but I can only assume this was his scheduled match for this show before he crashed the opening match.   He and William Eaver had a great brawl around the arena and Mikey Whiplash ended up winning the match in the end, but let me just say this:  Mikey Whiplash still reminds me of some sort of lost Misfit member and he has a great style when it comes to his wrestling and all that- he can go in the ring no doubt- but I'm just not sold on his gimmick.   William Eaver is the dude who thinks he's Jesus and that is just... It's one of the best gimmicks going in professional wrestling today and after seeing Eaver for the second time I am fully sold into it.    Sell me the action figure because William Eaver is now among my new favorite wrestlers.

Then it was time for the main event- Marty Scurll defending the title against Chris Hero.   Marty Scurll calls himself "The Villain" and so this was easily dubbed Hero vs. Villain.   I feel like Marty Scurll could come to NXT and be the biggest heel in all of professional wrestling (yet still cheered by some) with the guidance of William Regal.   I just watched Chris Hero fight Drago in AAW and this was a different match.    You can say what you will about Chris Hero- and I'd love to see him back in NXT one day as Chris Hero because I still think he'd be a huge asset for WWE- but the guy has to be one of the best veterans in professional wrestling today.   To be able to have such a great match with Drago- in lucha libre style- and then work the same style as Marty Scurll... It's just not something everyone can do.     This match was full of counters, near falls and Chris Hero even kicked out at one during the later half of the match.   My favorite sequence was when Chris Hero went off the ropes and appeared to be going for his elbow finisher so Marty Scurll covered his face.   Hero stopped and when Scurll looked him in the eyes Hero raised his knee right to the face of Scurll.   It's one of those things that you just have to see in action to appreciate and these two just put on a match which was everything you'd expect it to be and so much more.     This has me really excited for the next PROGRESS show (which is lined up for me to watch) and just PROGRESS on a whole I believe is really starting to become one of my favorite promotions.

Posted by Joshua Macala at 7:44 AM