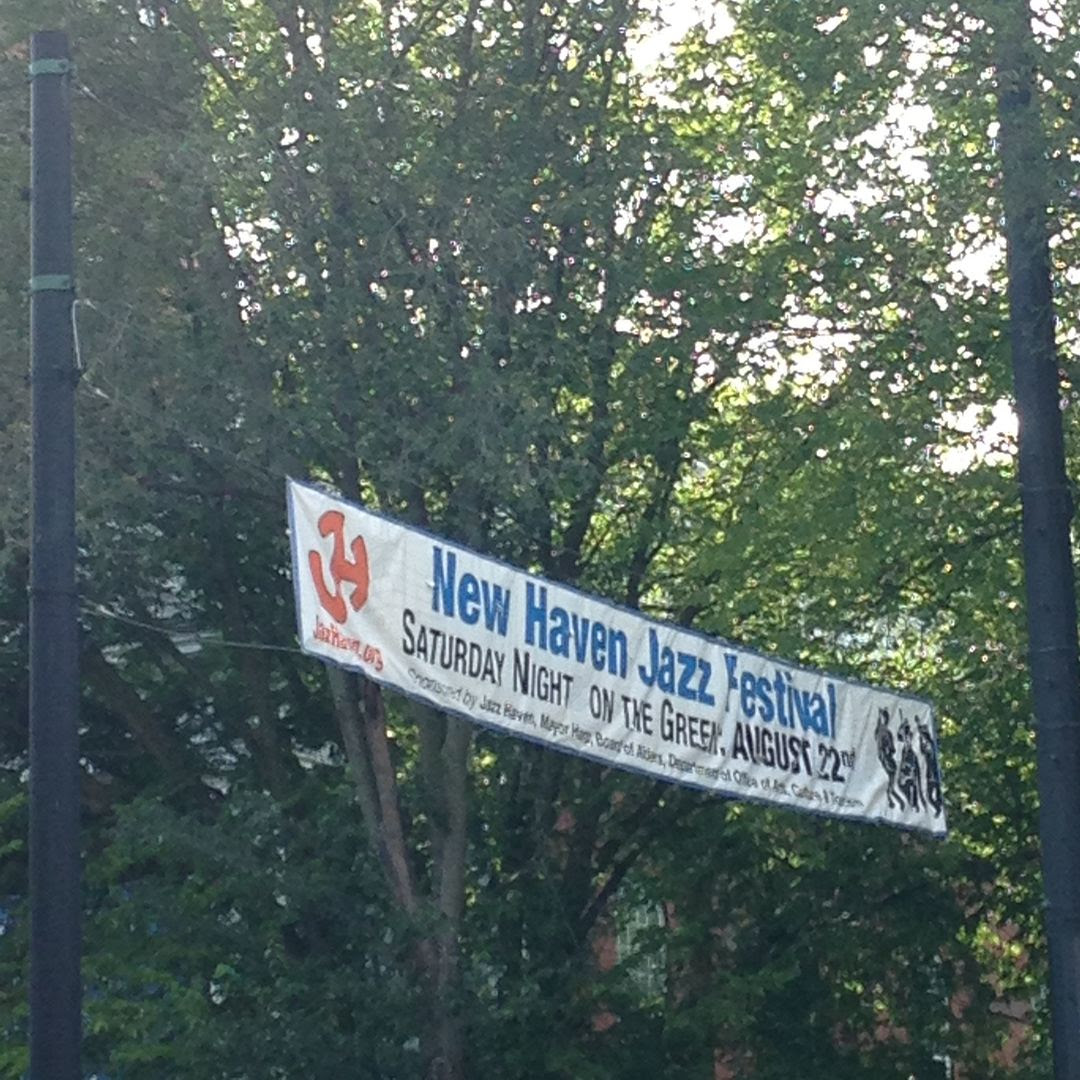 When I found out about this show from the Daily Nutmeg I knew it was something we would go to because it celebrated women and jazz.    The fact that this was outdoors and scheduled from 6pm to 9pm sealed the deal because it wasn't too late for Quentin and being outside allowed him a little bit more freedom than if we were inside somewhere that music usually takes place.     We weren't the only ones with this idea though as a lot of groups showed up to this event with parents and children and it was a perfect night for it with it being neither too hot nor too cold (The times it felt too hot there was a nice breeze that would come through and almost put a chill in the air)   There was some discrepancy as to when this was all starting exactly though, but I read on the website it would be at 6pm.   My Dad- who came along with my wife, Quentin and I- thought it started at 5pm for some reason but when he said he wanted to get there for 5 I assumed it was because of parking, finding a spot on The Green and all of that.


As it turns out, we got there at the perfect time.   Not many people had shown up yet and as we went to the New Haven Jazz table Isabella Mendes was warming up.    While she was warming up I was thinking of going over and asking her for a picture after she was done and what's that saying about how you miss 100% of the shots you don't take?  So Quentin and I went over to the guard rail when she got off the stage and she was on her phone.   She still made eye contact with us and smiled, sensing that we had found our way over there because of her.   I explained to her that it was the first time Quentin had ever been out to experience live music on purpose, as times he had heard live music before were coincidental (Such as the Rock n Roll Saturdays at Rock Cats games, which were not really musical experiences so much as baseball games) and asked her if she'd take a picture with him which she seemed more than happy to do.

What struck me as really funny was that she was on the phone with one of her band mates who was trying to get past security and she told him/her that she had to go because she was about to take a picture.    Whatever you want to call this (His first "show" or "concert" or whatever), how many people can say that they've had a similar experience?   The first live music I remember going out to see was Live and Weezer at The Sting in New Britain and, well, I didn't get my picture taken with either of those artists at that show (I was also about ten years older than Quentin when it happened, but I am trying to help the boy live a full and cultured life, documenting not only his "firsts" but most all of his experiences which is easier to do now with modern technology than it was when I was growing up)   It just kind of struck me off guard at how nice and personable Isabella Mendes is, as it'd be understandable for her to have the attitude of "Look, I have music to make here for all these people, if I took a picture with your kid I'd have to take a picture with everyone for which there is simply no time!"   I don't know, perhaps I'm just too cynical in my older years now.

The show opened up with the Jazz Haven All Star Youth Band which on paper seemed like "a bunch of kids", but these kids had so much talent in them that I was somewhat embarrassed- as I can often tend to be- like, what have I done with my life?  Here are these kids with more musical talent than me... But I try not to let it get me down.    Their songs were all instrumental and what kind of bothered me about this was that there were still a lot of people coming in, standing in the way, looking over the crowd and trying to find a place to sit down.   When some places said this started at 5pm and others said 6pm there is no excuse for you to show up late.   I know you figure it's the "local opener" and so it's okay to miss them, but what if you had paid for this show?  If you were paying to see this music you'd want to savor every second of it, right-- get the most for your dollar?   And yet, you're doing better than paying for this because it is free.   So you should be extra careful in enjoying every second of it and making sure that every moment counts because they're providing it to you at no cost.   Still, it might just be one of my personal problems but none the less, people should really show up on time even when attending a free event to give all of the acts performing the respect that they deserve. 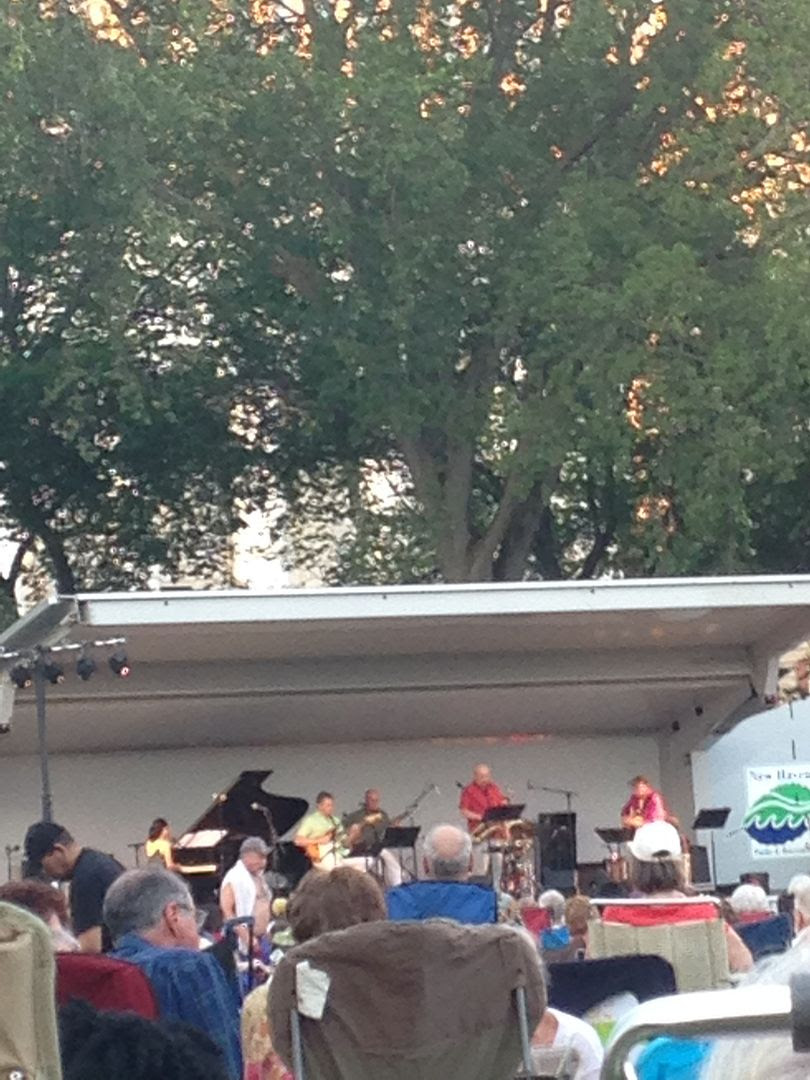 Isabella Mendes was up second and by this time most people had settled so she was really the only performer to not have as many people shuffling around during her set.   Her songs fall somewhere between jazz, pop, rock and something else.   While listening to her album "Blame Destiny" prior to this show I recognized the songs "Driver" and "Three Months Pass" in her set, though she didn't play "Gypsy" which is okay because it was still a lot of fun even without it.     Whether it was standing up and singing or sitting at the piano, Isabella Mendes played a great mix of music in her songs which were as told through stories lyrically as much as instrumentally.    My Dad- who really didn't know what to expect coming into this because had never heard any of these artists before and also said he never really listened to jazz- was impressed by the unique style and how it wasn't quite what he thought it was going to be but that just goes into the idea of how broad jazz has become as a term used to describe music and how Isabella Mendes does fall into that category at times while at other times she does not (Which can be based on a song by song basis or even sometimes from verse to chorus)   After the show ended on the whole my wife said something about how she thought my Dad seemed to be more into Karrin Allyson than Isabella Mendes but when we got into the car he said the opposite and so it's kind of funny because apparently Isabella Mendes makes music that even my Dad likes.   So when you can span three generations in that way you know there is something special going on and the live performance only enhances that essence.

After her set, Isabella Mendes noted that she had CDs for sale and would be over at the merch table signing them as well.   I thought, well, a picture with the artist you are seeing in your first ever live music experience is great, but what about a signed CD as well?   I felt like paying for the CD was also a good idea in general because of that whole comparison out there about people paying $8 for a cup of coffee that takes twenty seconds to make and you enjoy for a short time but not wanting to pay whatever the asking price is for a song that can take years to craft and can last a lifetime.   I also thought about how Quentin would have this as a memory for the rest of his life now and that would be something special he would always cherish.   So as we walked over towards the merch tent and saw that Isabella Mendes was in fact sitting at the table I set Quentin down and told him to run over and give her a hug.   Not only did he do that but he jumped up into her lap to the point where the woman sitting next to her asked "Is that your kid?" and she said "No, it's my new fan!". 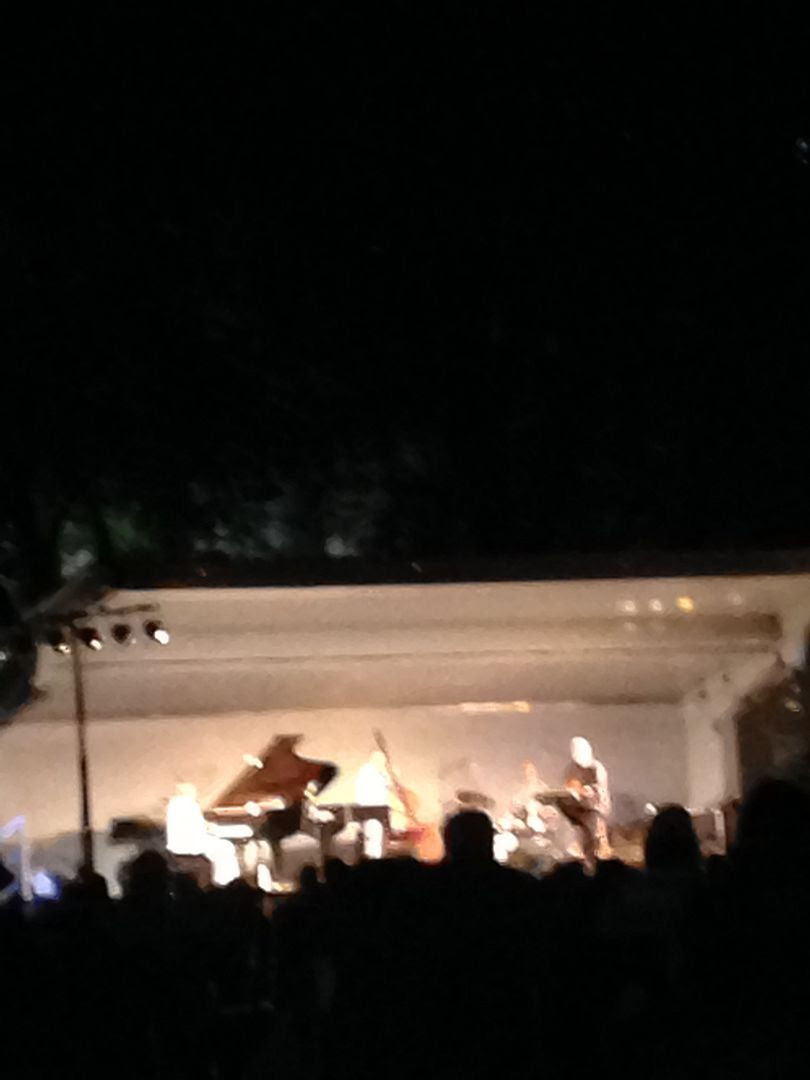 The Karrin Allyson Quartet closed out the show around 8pm and what was interesting about her set visibly is that by the time she went on it was so dark that the stage had lights in front of it so the musicians could be seen, which seemed like such a drastic change from the two performances before her and, yet, it just goes to show you what difference a little bit of time can make when outside and the sun is setting.    One of my problems with the first set also came up here, as people began leaving at various points during the Karrin Allyson Quartet performance.    Okay, so maybe you came with your kids and they fell asleep (To be fair, Quentin did fall asleep during her set because he was tired and it was getting late for him) but I saw adults without children leaving as if the show was over.    This was the headliner- the person which you were supposed to be there to see- and you were going to duck out twenty minutes early why?    I wonder how many people who left early also showed up late.   It's crazy the mind set of some people.   Would you order a three course meal and then only eat one of them?  If you were still hungry and someone offered you free dessert would you pass it up?  Because that's what these people leaving felt like to me.    In any event, Karrin Allyson played as lovely as she sounds recorded only with a certain added element of fire which came from being live.   I really like her voice but she doesn't sing as much as Isabella Mendes and rather relies on more instrumental pieces within the songs.   I only wish I had more time to listen to her in advance so I could know if this was something she did on record as well or if she sort of played the musical parts longer live in a jam session/riffing kind of way.

Overall there were three different and yet still all enjoyable artists which you can't really complain about because it was free.   I'm not certain if I'd go see The Karrin Allyson Quartet again or not because it would largely depend upon where the performance was and how much it cost (For some reason, I imagine them being in a classy place which costs lots of money to enter, the type of place where maybe you'd even want to wear a tie)  But we will most certainly be seeing Isabella Mendes again as she has two shows scheduled for the last weekend in August now, which we will be at Rock Cats games during, but in September if there is a 5pm show in Branford or somewhere else close enough you know we will be there.  Quentin is already talking about it as we've been listening to his new CD in the car and he's ready to go see his new friend again. 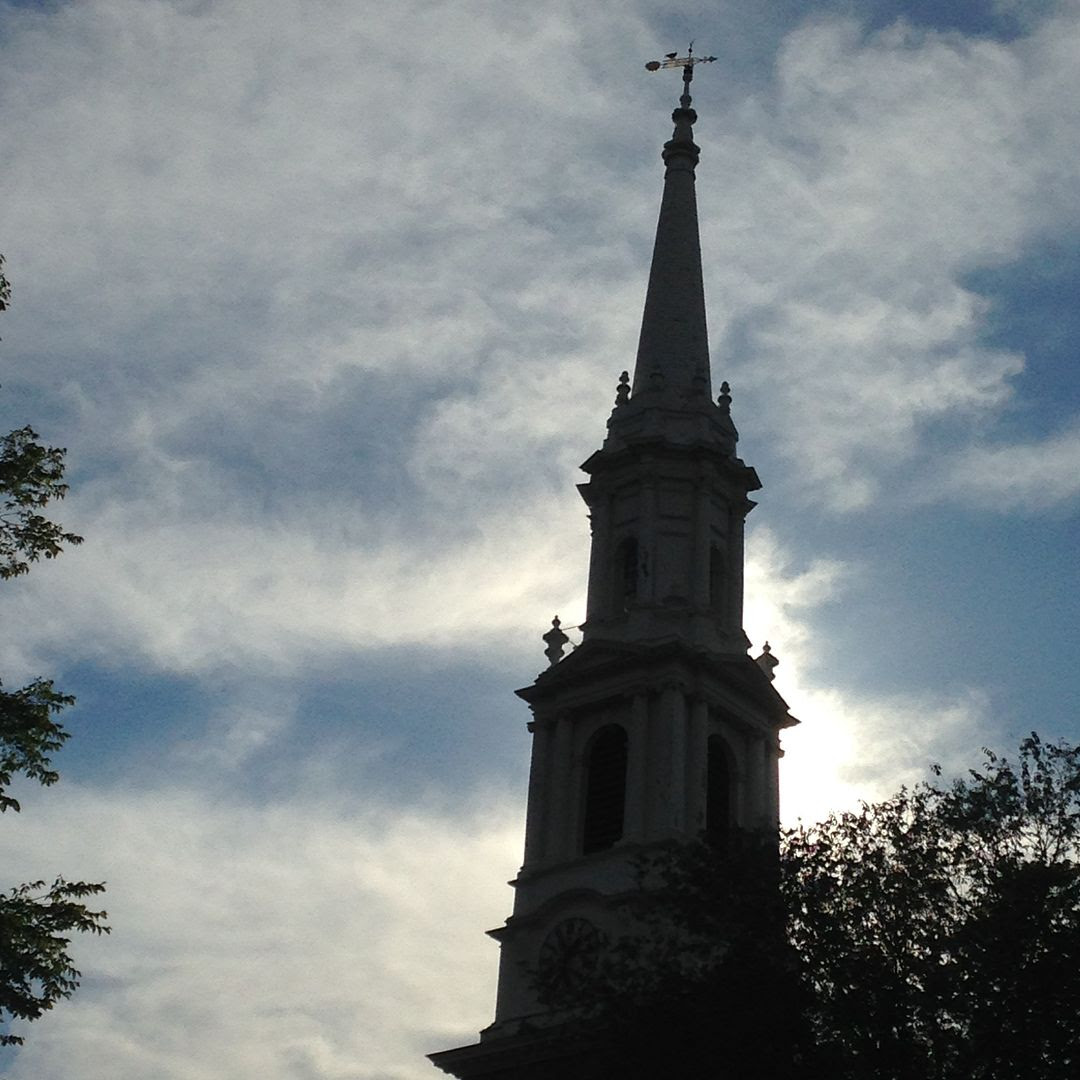 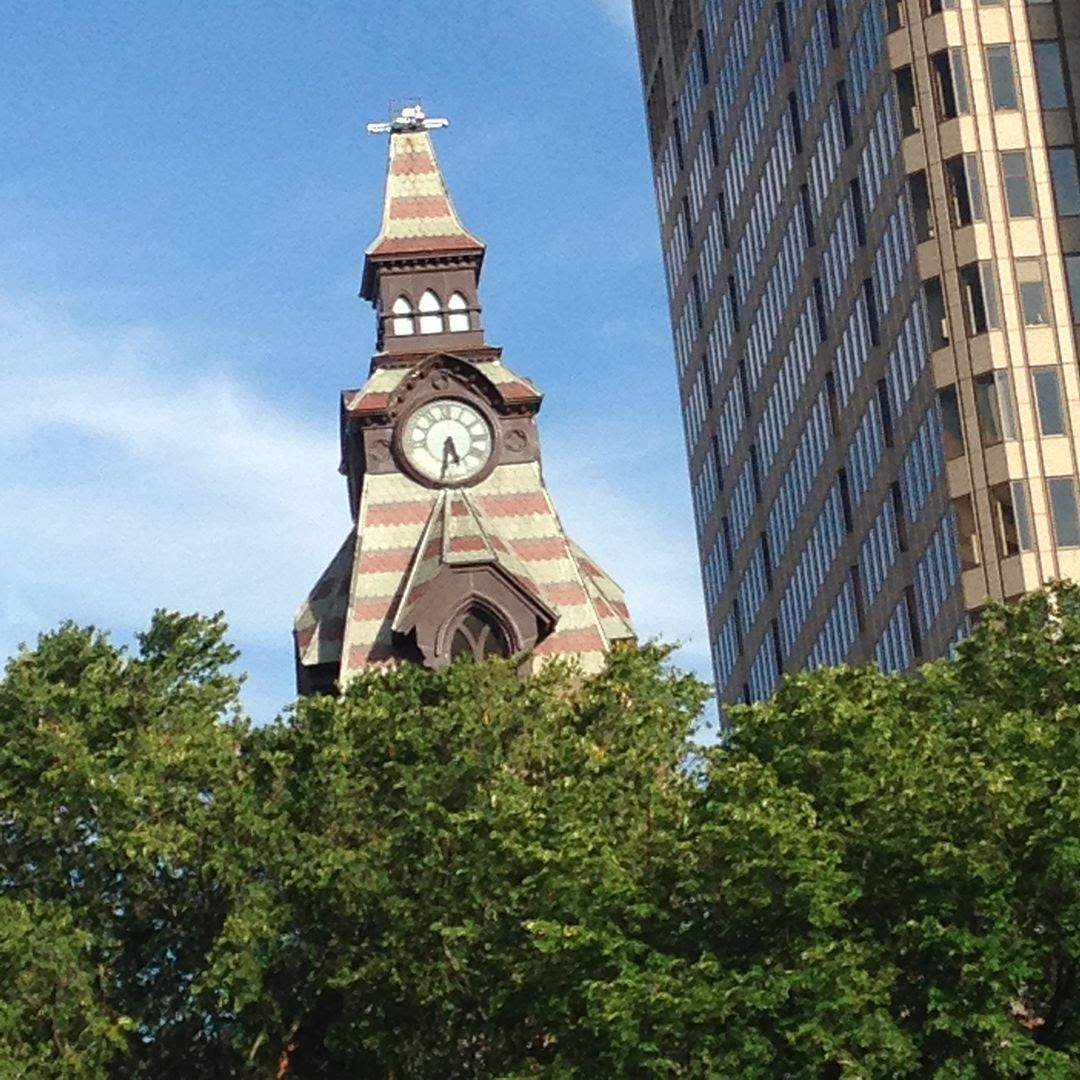 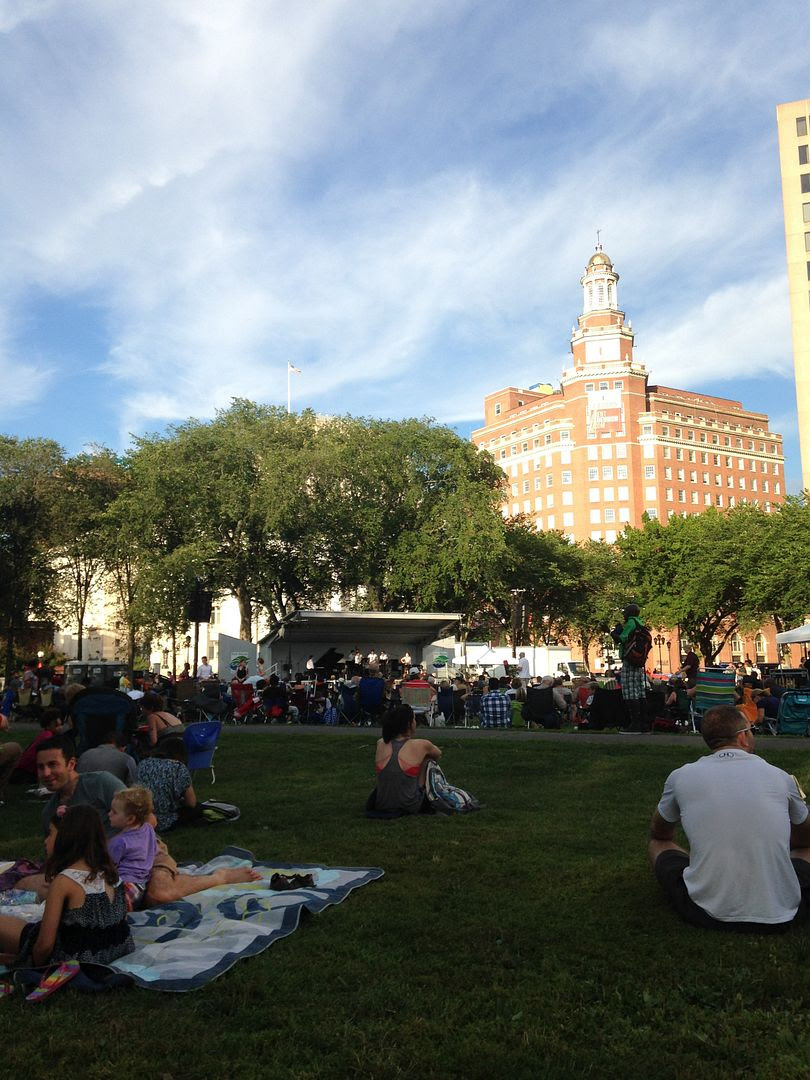 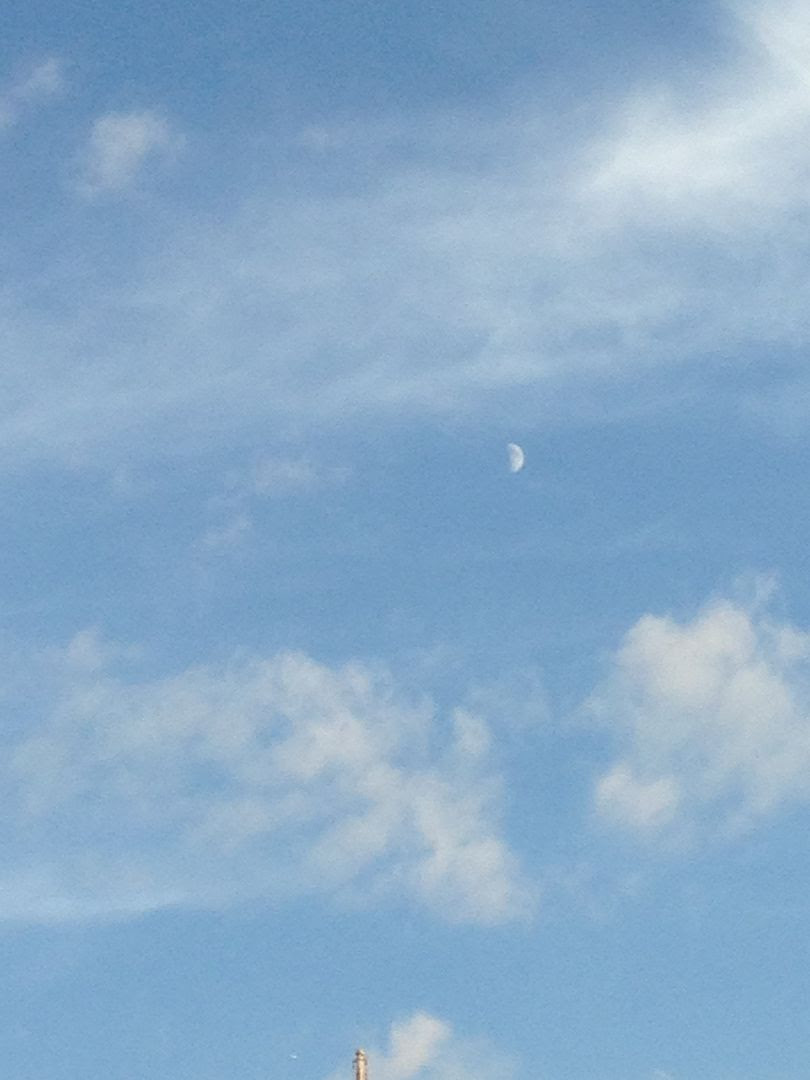 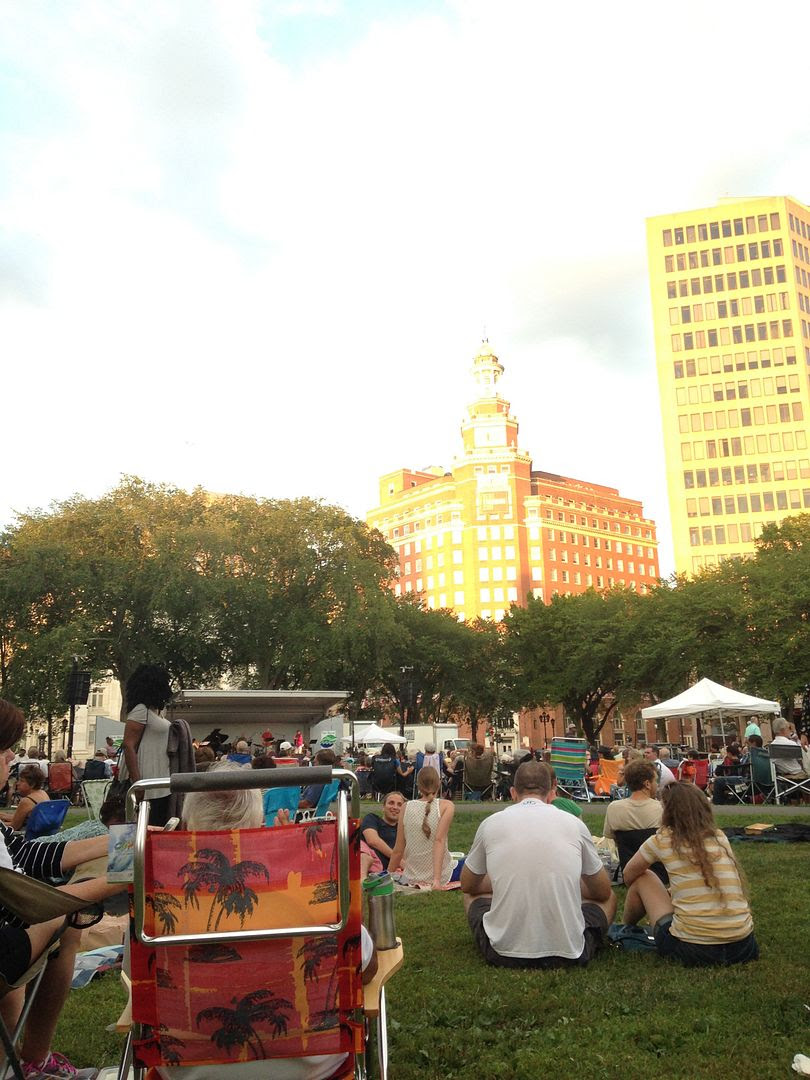 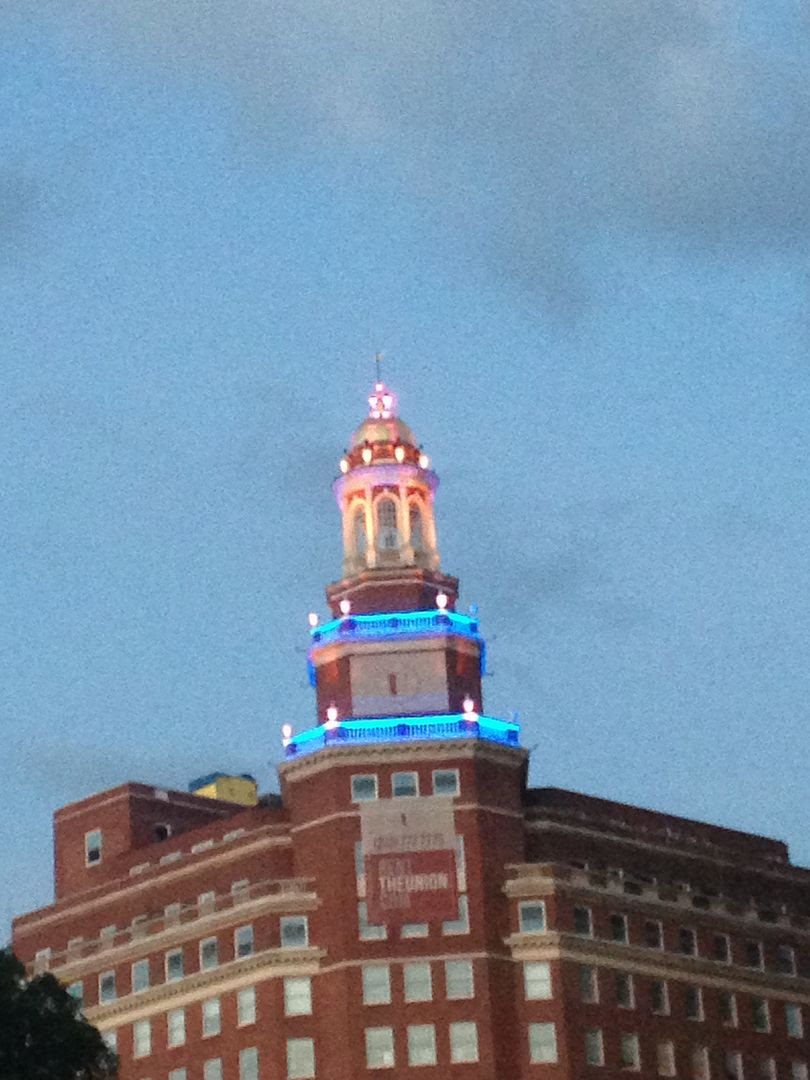 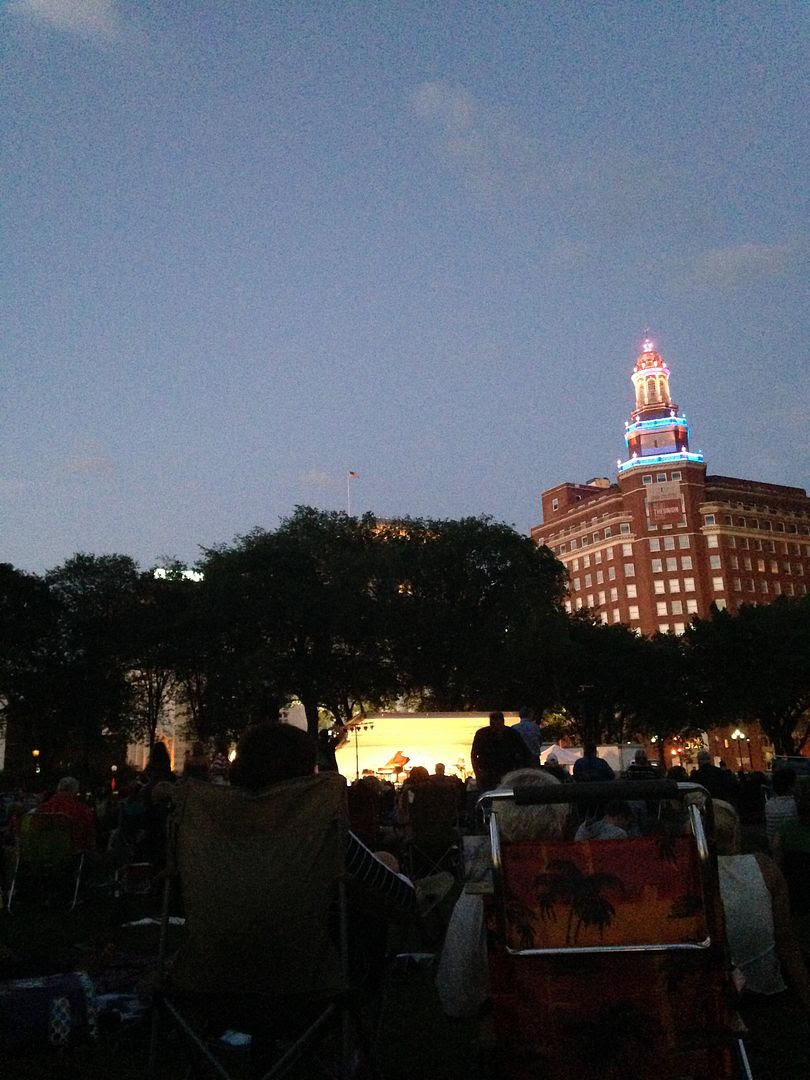 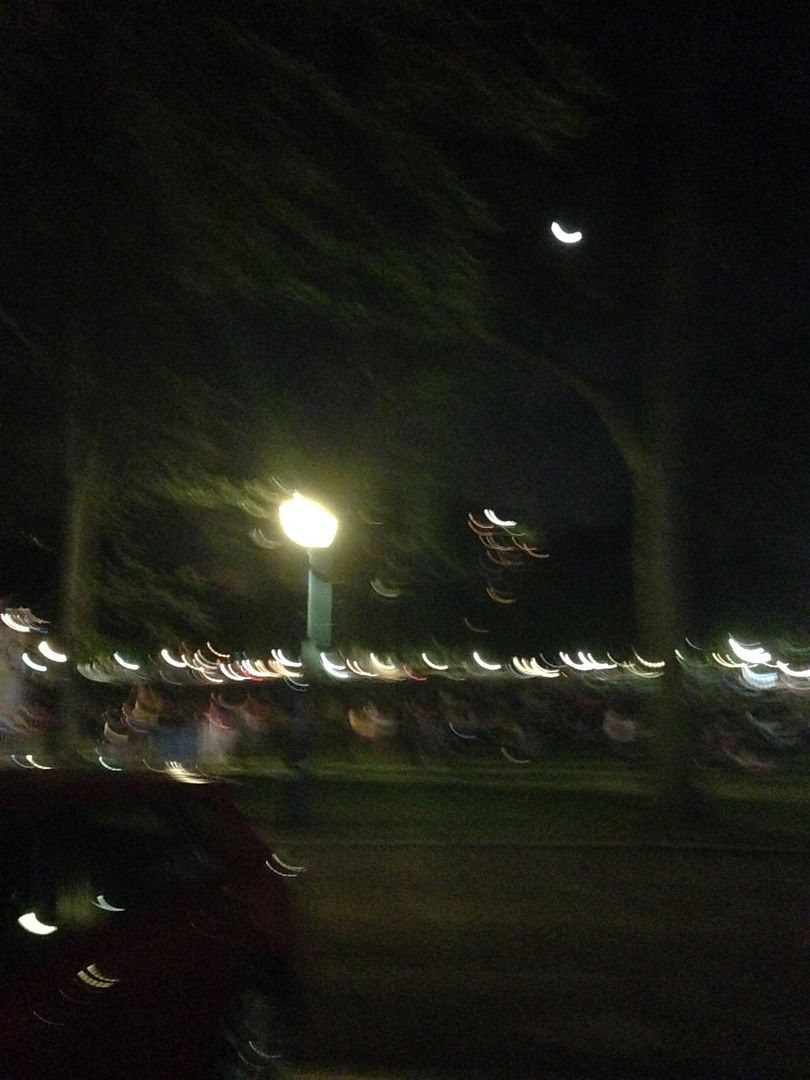 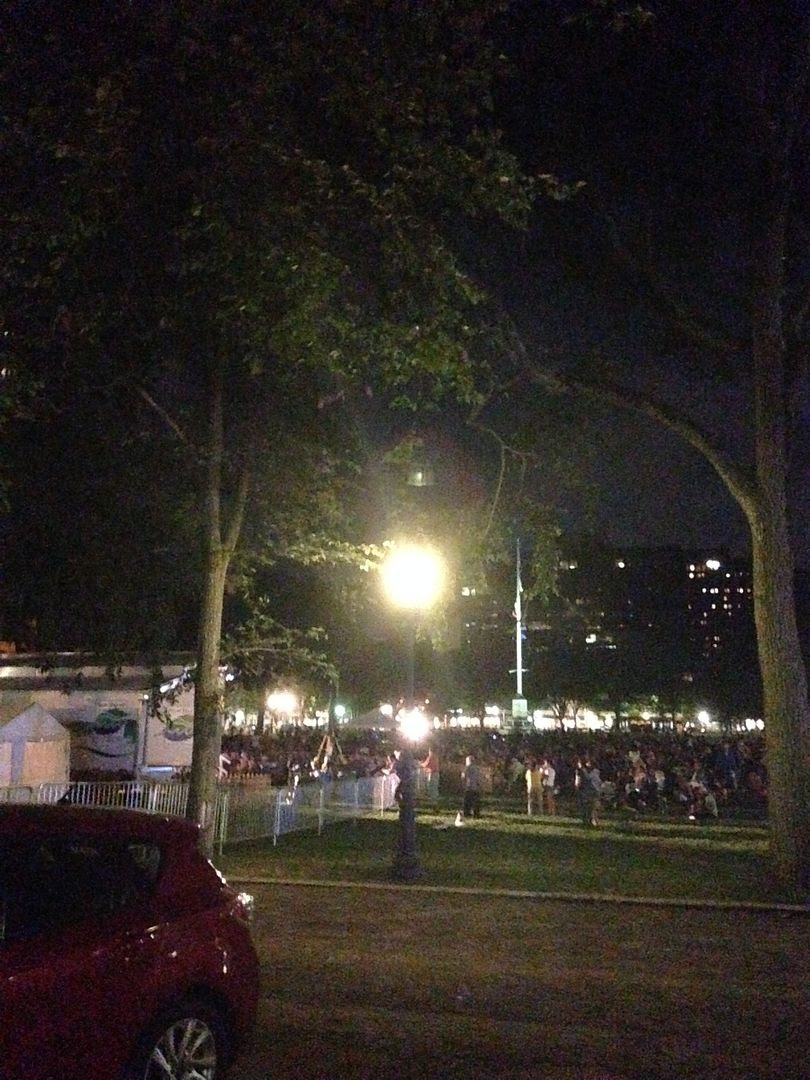