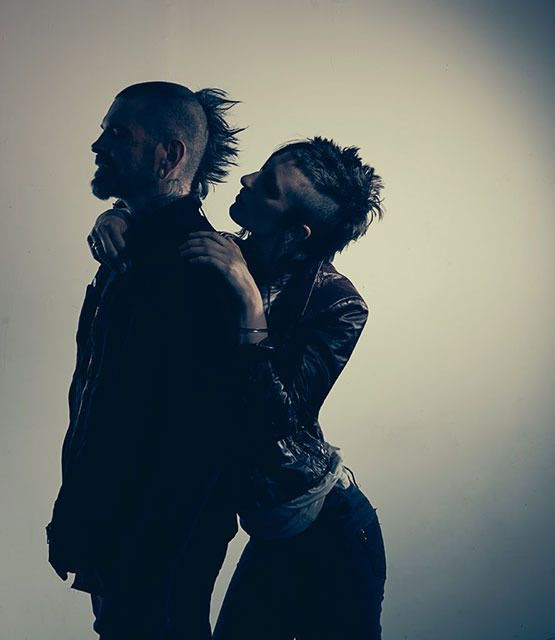 (1) Your name instantly and always makes me think of the Philip K. Dick novel "Do Androids Dream of Electric Sheep?"  In many ways, I do feel as if your music reflects a sound which one might think would go with that title or even the entire book for those of us who have read it.   Was this intentional, a happy coincidence or something else?

Ah we appreciate that.....but it was definitely a happy coincidence.

(2) You make a big sound for being a duo.   Do you find it harder to be a duo or easier since there aren't as many opinions and such to take into account when making a song?  I feel like having a third person as a tiebreaker would be ideal in some situations but at the same time if the two of you are on the same page, you only really have each other to disagree with to that extent.

As of right now we're mostly writing as a two piece but performing as a full band with Ben Hilzinger on Drums and Ian Forrester on Bass. There wasnt really a choice not to have a drummer....we just couldn't find the right human. We weren't prepared to wait so we we began creating beats and doing it all ourselves. We do still however do the majority of song writing. To answer your question i would say in a lot of ways its much much easier...taking into account that you a good writing partner. We have an ego-less approach, if one of us doesnt "feel" something, we just write a new part/song. We try to practice complete detachment to it and accept that we are just a vessel for the creation of something rather than taking personal ownership of it.

(3) Being from Seattle do you think there will ever come a time when Seattle is not instantly linked with grunge and Kurt Cobain?

Being in Seattle, it's hard to imagine that happened here...that was before cell phones and twitter though. We'd imagine that will always be a stamp on the history though.

(4) To describe your music briefly enough to fit into an interview question for me is to call it a mix of pop and rock.   This can go back to different reference points for different people but I feel like it has that quality of someone like P!nk- both vocally and at times musically- but then mixed with something like Stabbing Westward as well.   Would it be fair to say that you have been influenced by both pop and rock music?

To be honest this band was...and probably still is a confusing mix of influences. Hope pretty much only listened to hip hop/soul/motown while Drew was heavily influened by rock and roll and punk music. Neither had ever delved into anything electronic, or necessarily pop music prior to ever so android. The Kills and Die Antwoord were both huge early influences and helped us get out of the confines of what a band "needed" to be. We always joke that if we ever wrote an actual Ever So Android song we could just be done with it all and go paint all day.

(5) For me personally I don't subscribe to the notion that there should be such a thing as a "guilty pleasure" because if you like something you should like it and not have to feel like it's a secret.   However, I know for a lot of people they might feel like an artist such as the aforementioned P!nk or someone else in that sense of pop is their "guilty pleasure" but then you put that spin on it that makes it not so guilty.   Do you consider yourselves to be "socially acceptable pop music" and what are your thoughts on the "guilty pleasures"?   Who would you say are the artists that we might not think you would listen to but just love the hell out of?
First off, We have no idea if we're pop music. We can say that our fanbase is all over the map in terms of age/aesthetic which is refreshing...probably a good indicator that we're not totally a niche band. As for our thoughts on it...i heard someone say "as soon as music starts being about the music as opposed to the People/scene attached to the music the world will be a better place"...and we couldnt agree more. Listen to what moves you...who cares what youre supposed to like.
We openly listen to our "guilty pleasures" but...
Drew: I dont go out of my way to listen to Katy Perry but if it comes on Im sure as hell not turning it off.
Hope: Justin Timberlake
Ben: Def Leppard or Whitney Houston
(6) Your album "Disconnect" has a quality to it where every song seems just as vital as the last, a quality not many albums share these days.   Was that as well planned out as I think it was in the sense that every single track on there was given as much importance and almost taken as a little album in itself?

First off, thank you thats very kind. Bill gets all the credit for sequence. As for the actual songs though...we basically wrote 60 songs to write that album. We started as an acoustic two piece 4 years ago...playing coffee shops and such. Then we evolved to live looping which got us into some bigger rooms which started shaping our sound in a different direction. All of these evolutions had their own sets and in the process we began to understand better how to express ourselves through the music. When we originally met with Bill we were very clear we wanted to make an album and not 10-12 of the same song. That made it much easier to filter through our material and figure out what would work best. We definitely wanted to be telling a story musically.

(7) I do so enjoy the title "Disconnect" because there are so many things which we can disconnect from but given your name and the sci-fi notions it brings out in me I think of it as being a sign that we need to take a step back from our technology in ways- no matter how great it might be- and just get back to being human.   And I'm talking about having actual conversations with people instead of texting someone who is in the same room as you.    Would you say that was an intentional theme as well?

Its absolutely intentional....today at least. Whats interesting is how much that name molded our sound. We we're called Ever So Android when we were all acoustic..wrote a lot more love songs too. Somehow someway though our distaste for this massive withdraw from human interaction became a theme. Why go to a show when you have youtube, why talk face to face when you can text....that's exactly it. We're so obviously being manipulated as a society but everyone still cherry picks was ok/not ok. And we're just as guilty of it as anyone...it's a brilliant trap they've created.

(8) "Disconnect" will be available digitally as well as on CD.  Do you think there is a strong desire for physical media right now?  I feel like a lot of people download albums as playlists and then delete them when they're through listening to them but something about having a CD, cassette or record just makes it feel more permanent.

All we know is that when we ordered our original ep several people told us to just do digital because no one bought cds anymore. Our experience though is that we sold out of physicals both times we ordered them and we never sold one single digital download that wasnt attached to a tshirt or with the cd. We're vinyl crazy right now so we're not too objective about it all.

(9) You have a most excellent music video for "Already Gone" and as a kid who grew up watching music videos on Mtv I watched them slowly fade away and now they seem to be making a comeback of sorts.   How important are music videos to you?

They aren't especially important on a personal level but we are aware of how important they are today. We're aware that people will listen with their eyes. The reason we havent released many is because we have a hard time expressing ourselves through video at this point. We're are insanely excited though to start working with some bigger directors who can help bring our vision to life.

Thanks for the great questions and kind words. There's so much awesome shit going on in Seattle thats not on the national radar. Wind Burial, Year of the Cobra, Patrick Galactic, Wes Sp8, Dirty Dirty and so many more that we could talk forever about it. Those are a good place to start though. Oh, and come to the Crocodile in Seattle on August 7th for our Cd release!!!
Posted by Joshua Macala at 7:33 AM