SPOTIFY REVIEW: Metric “Old World Underground, Where Are You Now?”

When I first heard Metric, the song was “Help! I’m Alive” and though I thought “Fantasies” was their most current album at the time they either already had out a new release or were very close to putting it out.  Yeah, this was all around last year at this time.

As I dive deeper into the world of Metric, I find that they put out a new album nearly every two years since the release of this one back in 2003.   (The exception to that being their newest album was released in 2012 and not 2011)  So now my goal is to go through and review everything I can find on Spotify or otherwise by this great band. 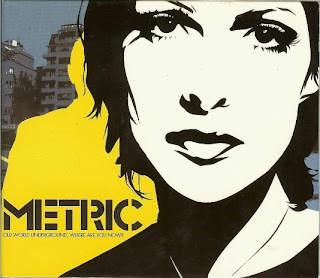 So I start at the beginning.  The first song opens with the title of the album and spins us through a web of what I have now come to expect from this band.  Back in 2003, I was falling out of love with music (some might use the word burnout, but who knows for sure) and I’m pretty sure that if I had heard this I probably would have written it off.

Compared to their newer two albums, which I have heard, you can tell that this isn’t quite as polished.  It has a raw quality to it, sure, but all of the elements that otherwise make this band so unique are still there and would be easy to win me over if I wasn’t so cynical back then.

Though even in 2013, ten years later, I’m not sure if I would respond to this album as much as I love “Fantasies” nor am I sure if I would even like it had I not already had a pre-established relationship with Metric.

My favorite line on this song is about being “caffeine free, faux punk fatigue” and my favorite overall song is “Dead Disco”, even though the “la la la” part can be slightly unnerving.

As far as debut albums go, I’m glad that “Fantasies” was my introduction to Metric, but this is still above and beyond the music that other bands are making and nicely sets the ground work for what would eventually become something spectacular.
Posted by Joshua Macala at 4:46 AM