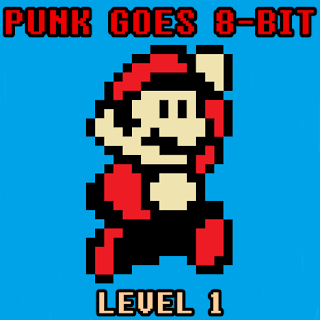 Ever since I found out about 8-Bit as a music genre, or chiptunes or chipcore or what have you, I’ve always been interested in cover songs for some reason.  I’ve constantly looked for covers of various songs, any songs really, and I’ve found quite a few.

While I am not able to say that I have found an entire album covered from start to finish in 8-Bit (someone please do it), I did find this compilation of twelve punk songs done in 8-bit form.    It’s really the closest thing you’re going to get right now to an 8-Bit cover band [Side Note: I’d designate an 8-Bit version of the Beatles to be called The Betales, because it has the word “Beta” in it and looks like you misspelled… yeah, you get it]

What I particularly enjoy about this album is that the songs themselves are covered by various artists throughout the punk scene and history of punk.  Okay, so maybe it doesn’t go quite as far back as Sex Pistols or even Ramones, but it has some good Epitaph era bands.

Despite covering Blink 182, at least the cover was of “Lemmings”, which is off of “Dude Ranch”, i.e. a song that I know because it’s not from the later years.   This also has punk favorites such as NOFX, Pennywise, MxPx, The Offspring and even The Queers on it.

My two personal favorite tracks on here though are No Use For a Name’s “Justified Black Eye”, for reasons I won’t get into, as well as Lagwagon’s “Know It All” because it is simply one of my all time favorite songs, right up there with “Asleep”.

Bands like Rancid who didn’t make the cut this time around could be seen in a future “level”, as this title indicates that this is the first.   There are countless punk bands out there to choose from within the early Epitaph and Fat Wreck Chord days, right down to the even older bands like I mentioned earlier.

Since this one does have Less Than Jake on it, I’d expect the next one to feature Voodoo Glow Skulls.  I’d also like to see some TSOL and would it kill anyone to cover Ten Foot Pole?

This ranks right up there with the Folk-O-Rama version of Punk-O-Rama only on the opposite side of the spectrum because this one is all digital and that one is all acoustic.   Oh, yes, and this is also missing some Bad Religion.   Hearing Millencolin in 8-Bit as they were in folk punk (“Bullion”) would simply make the universe a happier place.