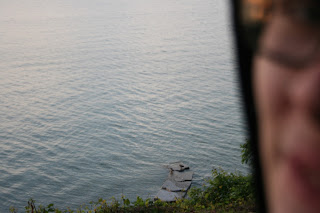 On “Jacoby”, the five songs by Jymptom (which I like to think of as being “Symptom” only with a “J” instead of “S”) encounter the boardwalk between ambient and drone.   Sure, they set the mood for an ambient album, which is quite special, but that’s not taking anything away from the fact that the songs also have this droning guitar chord that just seems to go on forever.

So whilst not true ambient, the drone doesn’t take anything away from this sound but rather adds to it.    This is one further proof that ambient music does not have to be boring and this is just some good old fashioned music on the whole.
Posted by Joshua Macala at 11:34 AM