Further proof that 2013 is The Year of Music, we get a new album from Joan Jett & the Blackhearts.   Let me tell you a story (Perhaps the only story that you need to know) about Joan Jett.

I used to be really big into horror movies—I mean, like, really big.  When I was drifting in and out of music in the late ‘00’s, I was watching anything and everything that I could under the horror movie banner. 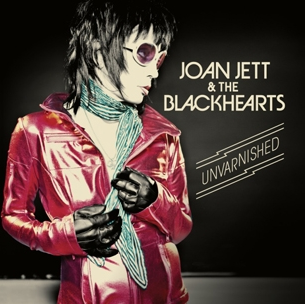 One year, I mistakenly watched the Mtv Movie Awards and the winner for best performance in a horror movie went to the least deserving choice:  Dakota Fanning.  She was in some stupid movie that wasn’t really scary with Robert Deniro and, well, I don’t think anyone remembers that movie nearly as much as the FREAKIN’ “SAW” SERIES.

But, alas, this is not merely sour grapes over someone undeserved winning: No, I would be able to let that slide quite easily.  It is what this little child said when she won the award.  Something about how shocked she was and everyone else nominated was so good and deserved it just as much or some such nonsense.

The whole thing made me quite ill.

So from that moment on, I’ve never liked Dakota Fanning because even at such a young age she considered herself to be in the same class as someone such as Carey Elwes, who was in nearly every favorite movie of my youth.  (Men in Tights, Days of Thunder, Princess Bride… Whoa, he really was)

Plus I also think that the movie I watched about Joan Jett had that girl from Twilight in it and, well, even people who like the Twilight movies don’t like her, so there you go.  I sat through the movie “Runaways”, so that can tell you how I feel about this album.

This movie could be ninety minutes of Joan Jett farting and burping and it would still be better than that blasted movie.  Luckily for all of us, this just rocks.
Posted by Joshua Macala at 3:59 PM