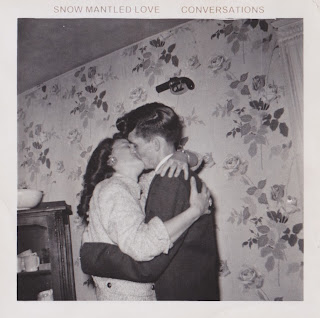 Last year when I was doing my end of the year round up, trying to see what I had missed, I found a website that posted a detailed list of the best albums that were released in 2012 and could be downloaded on Band Camp for free.   This lead me to Snow Mantled Love (Thank you, Wake the Deaf) and I have been a fan ever since I did a SBSR of their “Romance 126”.

Now here we are, a year after that was released but I was listening to it late last year/early this year for the first time, and here comes an eight song album from SML.    A lot of the qualities that I found in them previously are still there.  This is bedroom pop rock.   It can be acoustic/folk.  It resembles Mazzy Star, but that’s the only thing which I can compare it to which hopefully means Snow Mantled Love is forging their own sound.

The piano on the second song also really helps this album to establish itself on its own merits and not of those who came before it.   This should quite easily be in many top ten lists this year.
Posted by Joshua Macala at 8:33 AM