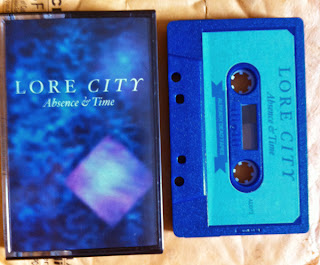 The first song on “Absence & Time” has a moderately paced rock n roll sound where you could pretty easily compare Lore City to a typical go-to female fronted band like Blondie.    As the second song comes on, however, you begin to hear the female vocals come out with a piano and, well, it doesn’t really sound like the piano you’ve become accustomed to hearing (Adele, Florence, etc.)

It is at this point in time that I realize this album—this band—well, there’s nothing typical about them.   The singer just belts these songs out and it is amazing.  It’s hard to imagine what it’s like to be able to sing so well, but this frontwoman, she has it done.

At times, the singing can turn to a sort of screaming, but not at all in a hardcore/screamo way, but rather more like a woman would begin screaming if in a heated argument with another person.   The vocals, though really only half of the package here, really make this album.   Lore City could be a huge band if the cards align themselves and allow it to be as such.   This singer here, she has Janis Joplin qualities and I don’t recall ever saying that about anyone before. 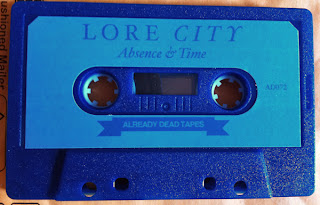 Granted, all of this is only made that much better with the music that accompanies it.  (Upon looking at the linear notes, I found out that Lore City is actually a duo, so a lot of the music is being crafted by the same wonder-woman who is singing these songs with seemingly such ease)  The music does remind me of a guitar based rock n roll based.   You could easily go to Blondie, Joan Jett or even The Raincoats, but I do believe that they’re creating something even special to the world of male fronted bands.

However you want to describe this musically, it is without a doubt loud.  At times, without turning up my volume at all on my tape player, I felt like my speaker was going to blow.   Sometimes it was the music, sometimes it was the vocals.   In any case, the keyword when listening to this cassette is: power.   This is just so powerful. 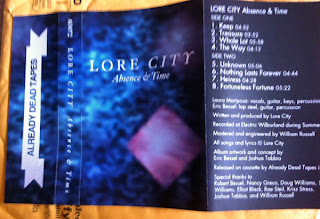 Posted by Joshua Macala at 1:31 PM