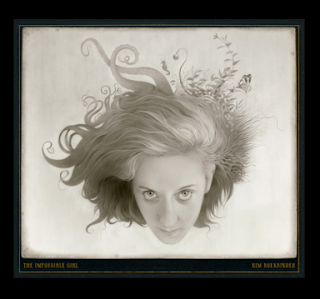 Kim Boekbinder “The Impossible Girl”
So while listening to all of these songs on “The Impossible Girl” I decided that nearly every song crosses a musical genre so the only proper way to review it would be a SBSR… but that’s a lot of songs, so I’m going to tell you a story instead.
When I was in my early teenage years and trying to create music myself still, I had a friend who worked for a record label.   I can’t name names and I won’t, but let’s just say “their” name does happen to appear in the linear notes of some pretty decent records by such musicians as Jeff Beck.    Anyway, we became friends not because of the music industry, no, that was a coincidence I learned afterwards.   So I told her once my idea and I feel like it’s an idea that Kim Boekbinder took in some way, but I don’t mind.
My idea for “finding my sound” and having a label interested in me was to present myself as a small label in my own right and send out a demo of mixed songs which- though all by me- would be masked under the guises of different band names to reflect their own particular styles.    So yeah, I’d have a ska song, a punk song, a hardcore song, an acoustic song, a rock song, etc. just to see which one sticks and then that would be the band that I went with.    The funny thing is my friend told me that this was a really good idea.  I never followed through on it though because, well, I’m sitting here now and not opening for P!nk.
So, yes, amidst a vocal range that is somewhere between Kimberly Freeman and Alanis Morissette, Kim Boekbinder definitely displays her musical range on this album.
What I found kind of neat about this album were the lyrics.   From lines such as “I want you to crush my dreams so it’ll mean that I had some” to “You can use my toilet if you promise to flush”, everyone can get something out of this.
As I get further into this album I also began to realize that the first song was not being sung in first person, but rather perhaps has the lesbian undertones.   She actually has a song called “Gypsy” (Which just makes me love her that much more) and it’s about how she fell in love with a gypsy that is constantly referred to as a female.  I especially like the line “Last night she showed up with 23 friends.  They all needed to be fed”.
Also, there is a song on here called “Lick My Love Pump”, which states in the title on the track that it has explicit content.   So of course, I listened to that song first (Sorry, I had to see just how explicit we were talking about here) before listening to the whole album in proper order and let me tell you something… The things she sings about on that song should never be sung on any song in any capacity.   To suggest… To say the “m” word… She just must be stopped!
In all seriousness, Kim Boekbinder, I love you and want you to feel like in some strange way Raised by Gypsies can be your home away from home because I feel like we think very much alike.  Much love and everyone who has the ability to should be listening to this album.
Posted by Joshua Macala at 9:23 AM