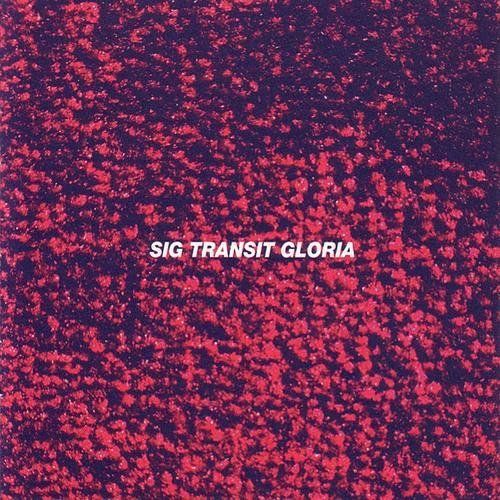 I first started writing about music in 1999 and as this self-titled album from Sig Transit Gloria came out in 2000 it was among the first promo CDs I would have received back then.   You have to understand that at the time, Napster was going under and there was no real social networks like there are now and obviously no Bandcamp or anything along those lines.   You heard about bands by name, but rarely by sound unless you saw them live.   Music for review was all sent through the mail and it was usually on CD.

Taking that leap from what was on the radio and sometimes letting those bands lead me down a rabbithole to what I was able to listen to because I was writing about music was just this huge transition in my life-- it changed the way I heard music because writing about music really afforded me the opportunity to listen to these songs, to these artists, I would likely have never otherwise heard.   One of them was Sig Transit Gloria and I actually used to have a poster for the cover of this album on my wall in my bedroom at my parents' house.

Typically when music is fast paced (that borderline punk) and has keys I think of Sig Transit Gloria still and I will also use them as a point of comparison in many of my reviews since starting Raised by Gypsies.   The early 2000's was a different time when bands like Schatzi and Veronica were creating this scene where there was punk rock but filled with keys as well.   It was just so raw and I loved everything about it; I still do.   I wish more artists had this just passion pouring out through their songs these days like Sig Transit Gloria had.

"Thank You" is a song that is a great example of how the music I listened to sounded in the year 2000.   It was punk.   There were parts of pop.   But it was just so wild.   In some ways, I listened to a lot of pop growing up because I think everyone does and then I was listening to music on the radio which became grunge and ultimately I found punk, so to have that comfort of pop music where you can sing along but also that unchained energy of punk made this so appealing to me.   It also feels like it paved the way for me to listen to a lot of the artists I listen to still to this day.

In time, I hope to find more of these hidden gems of music and write about them- I already have some in mind and one of them is "Young Love Gone Terribly Wrong" by The Beans, which oddly enough, I feel like some sort of tour with The Beans and Sig Transit Gloria playing together back in the early '00's would've been great.    It just amazes me how these songs hold up over time as well.  I feel like a lot of music I listened to in the early '00's I would look back on now and kind of cringe (so much emo) but this is something I'd buy a re-release of on vinyl without hesitation.