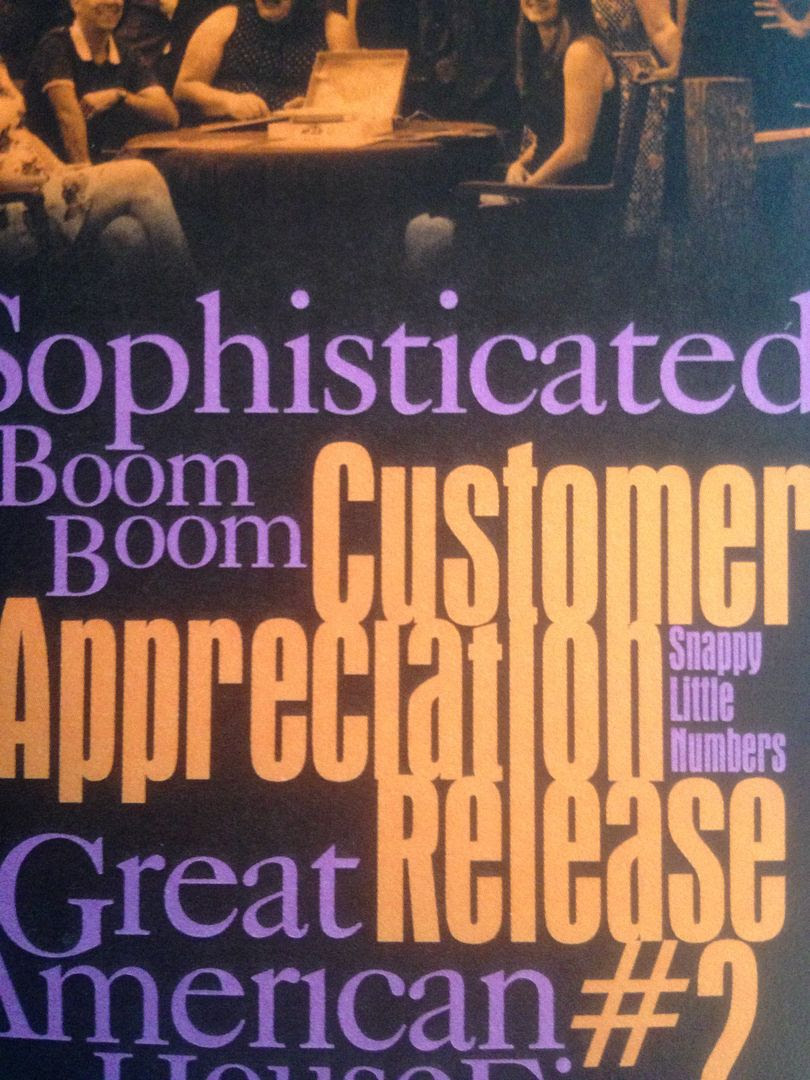 What an interesting concept this is- something which if I was told was done on purpose I might believe it.   This cassette is called the "Mispress Edition" and when you look at the Snappy Little Numbers site it says it is $0.00, which I assume means if you order something they will include it for free.   What happened was apparently they have the sides mixed up so what is supposed to be "Side S" with two songs from Sophisticated Boom Boom is actually the one song from Great American House Fire and obviously vice versa.   So, I'll write about each song and start with what should be second but is actually first.


"Doris Day and the Thyme" by Great American House Fire

This starts off as a loud song.   It has this element of bands I've heard before but it's been a while since I've heard bands like this so I can't name the names.   A little bit of Great Grandpa in here for sure.   Musically, it reminds me a bit of Coheed and Cambria as well.   It just has those melodies that I feel like it's partially something from the 1980's (Even Fleetwood Mac to an extent) mixed with something more recent like Metric, for example, though I really want to think of that band Boom Said Thunder but I'm not sure it's as general a reference.   The drums are banging.


"I'll Make All The Money" by Sophisticated Boom Boom

Crunchy guitar chords start like Muffs and it has that "10 Things I Hate About You" mixed with "Angus" soundtrack idea.   The vocals have more of a retro feel to them too- almost like something you'd hear in the 1950's or 1960's era of rock n roll.   This is somewhat catchy as well, in that Mr T Experience punk rock type of way.   Slight hints of Weezer as well.

Somewhat Dancehall Crashers, somewhat Joan Jett this has this definite sound to it like something you would imagine from Josie & the Pussycats or that sort of idea.   Does anyone else remember The Donnas?  I really like this song though because of not only the title but the lyrics about it, where it seems like a lot of people go "Oh yeah, I like that artist because they're pretty" and it seems to become more about how someone *looks* versus how they *sound*  I mean, if you didn't find the members of a band physically attractive would that prevent you from listening to their music?  If so, you're going to likely miss out on a lot of great music.    I also think this should be a social commentary where it's released as a single on a 7" with the B-Side being "Girls In Bands Aren't The Merch Girls".


Now what I find interesting about this cassette as well is that there are 100 purple copies (which is this one, which is the mispress) and then there are also 100 orange copies which seem to have the songs on the proper side.   As a fan of cassettes I don't know which one I'd be more likely to want to have in my collection and I feel like it would have to be both just for the sake of having the standard version but also the mistake which I find to be pretty cool.   Either way, this is a great chance to get to know two wonderful bands and you should certainly take it. 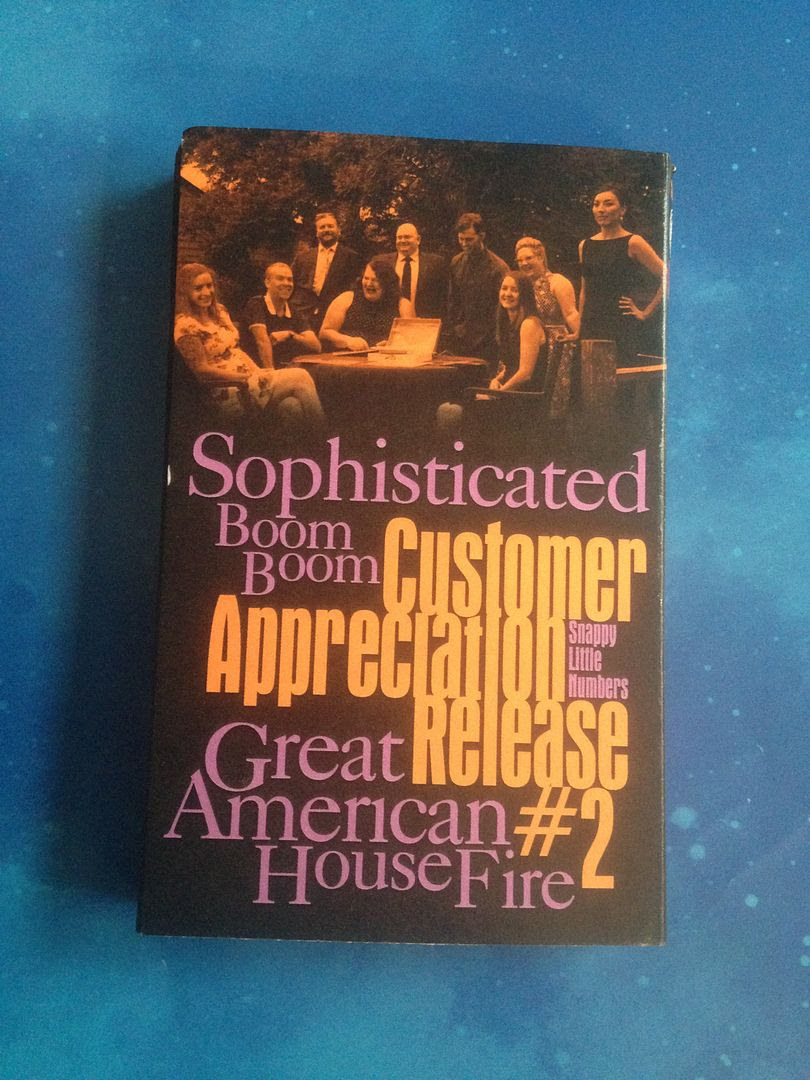 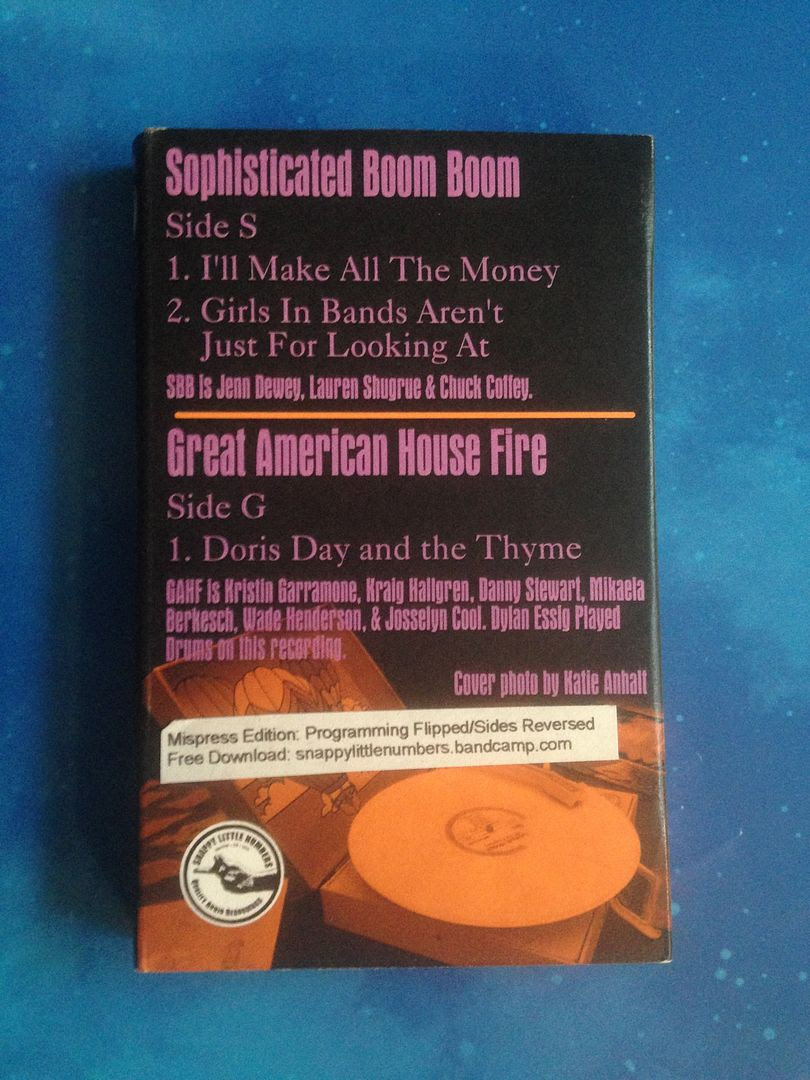 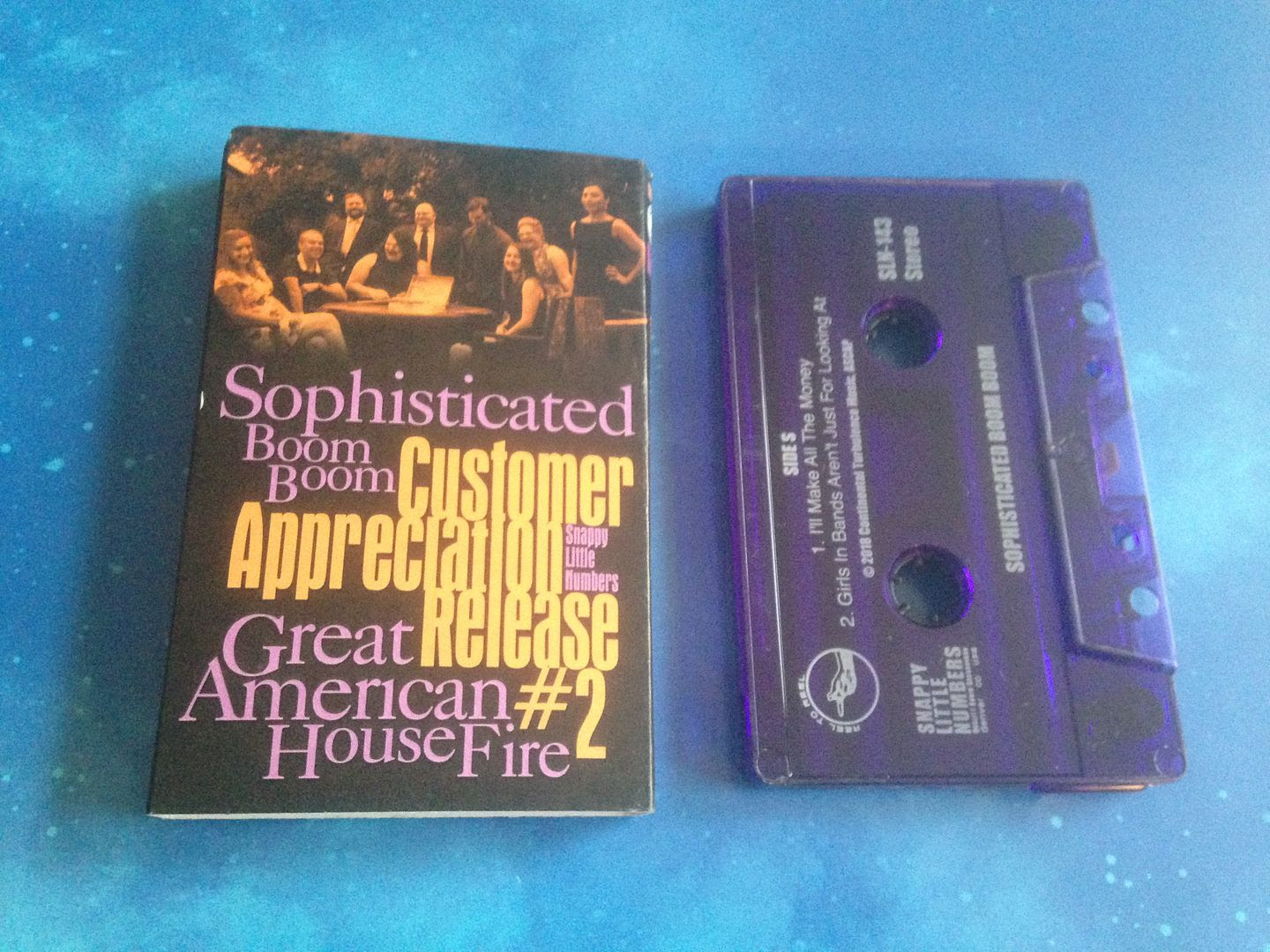 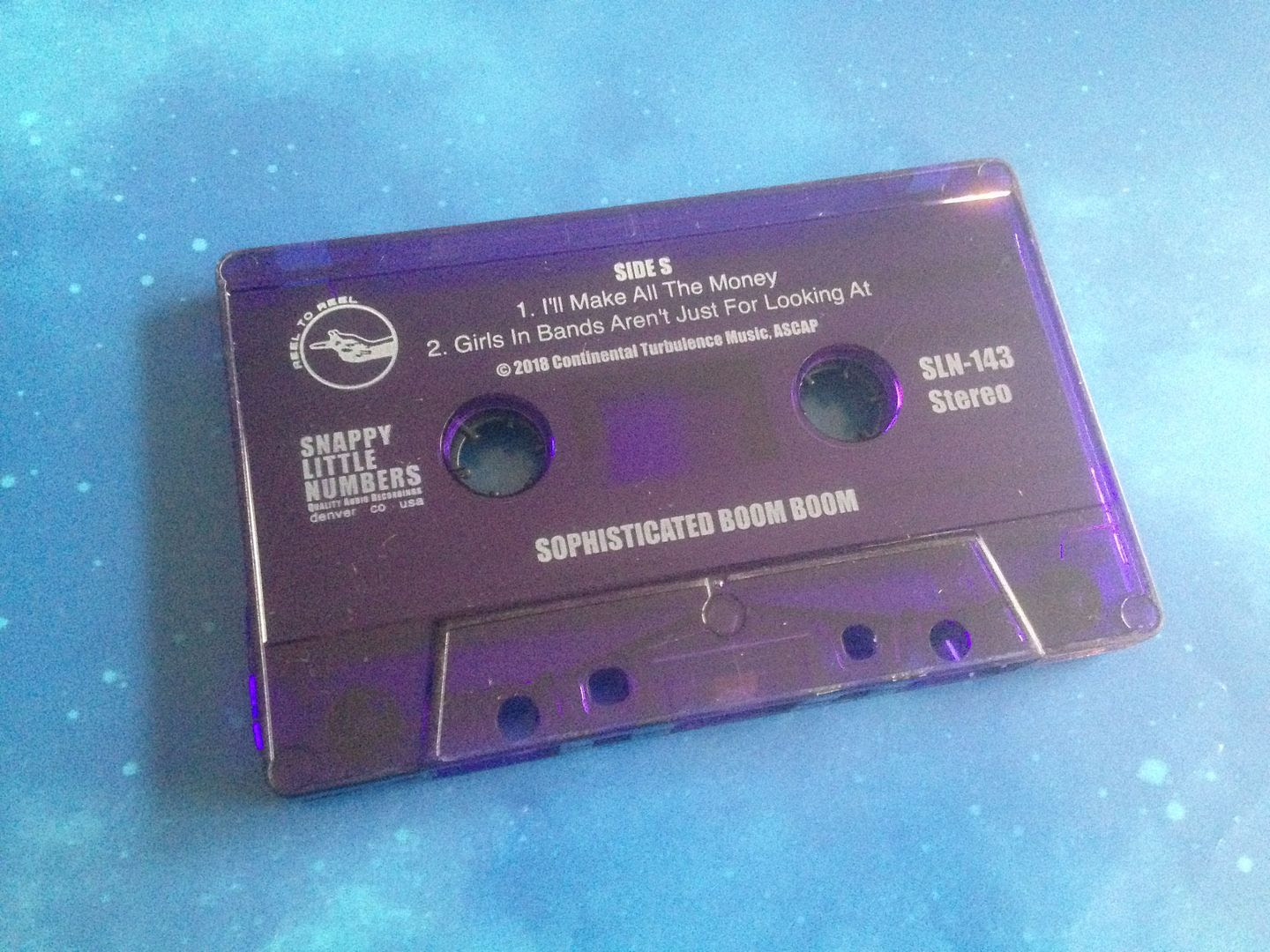 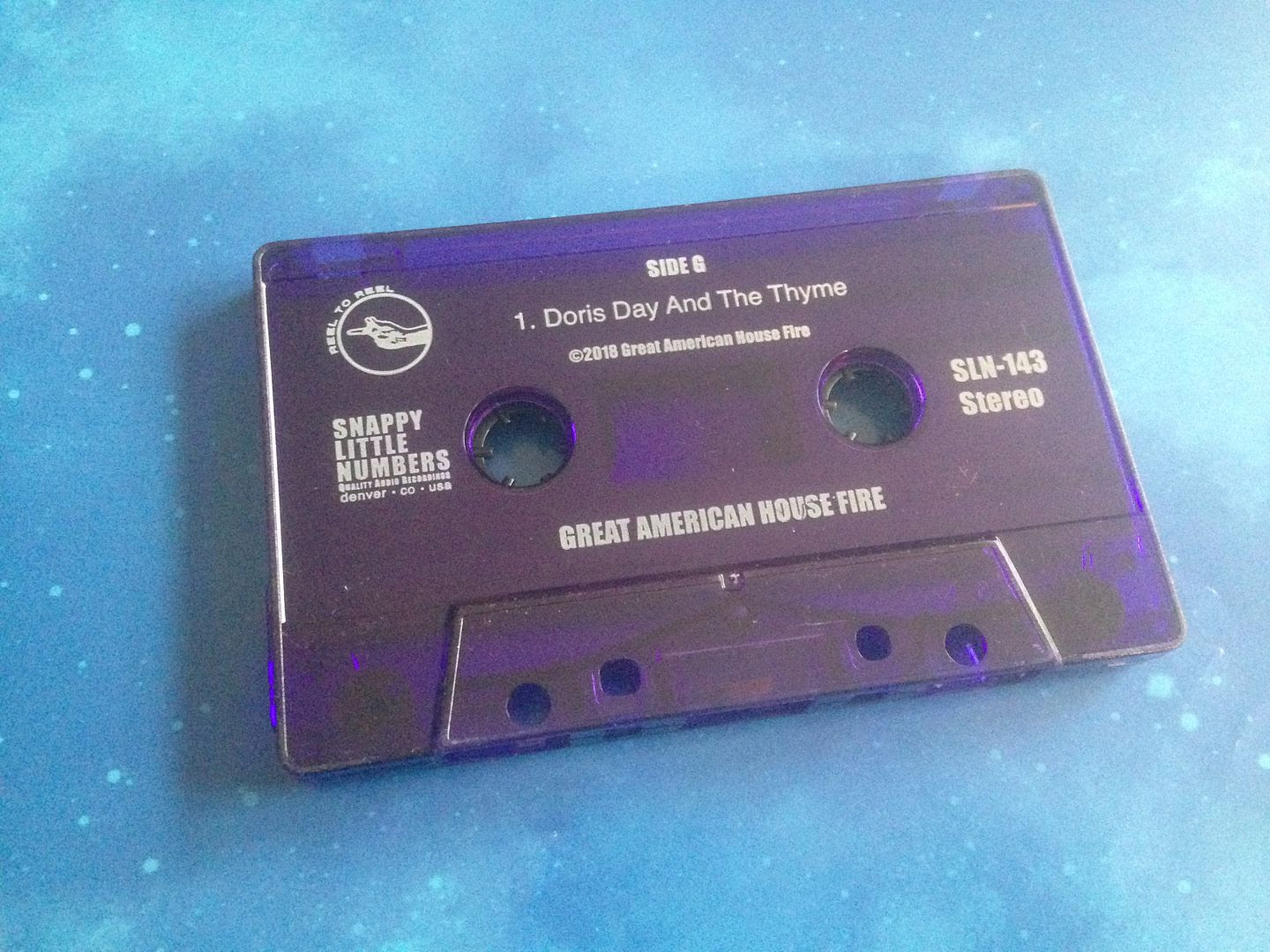 Posted by Joshua Macala at 1:47 PM