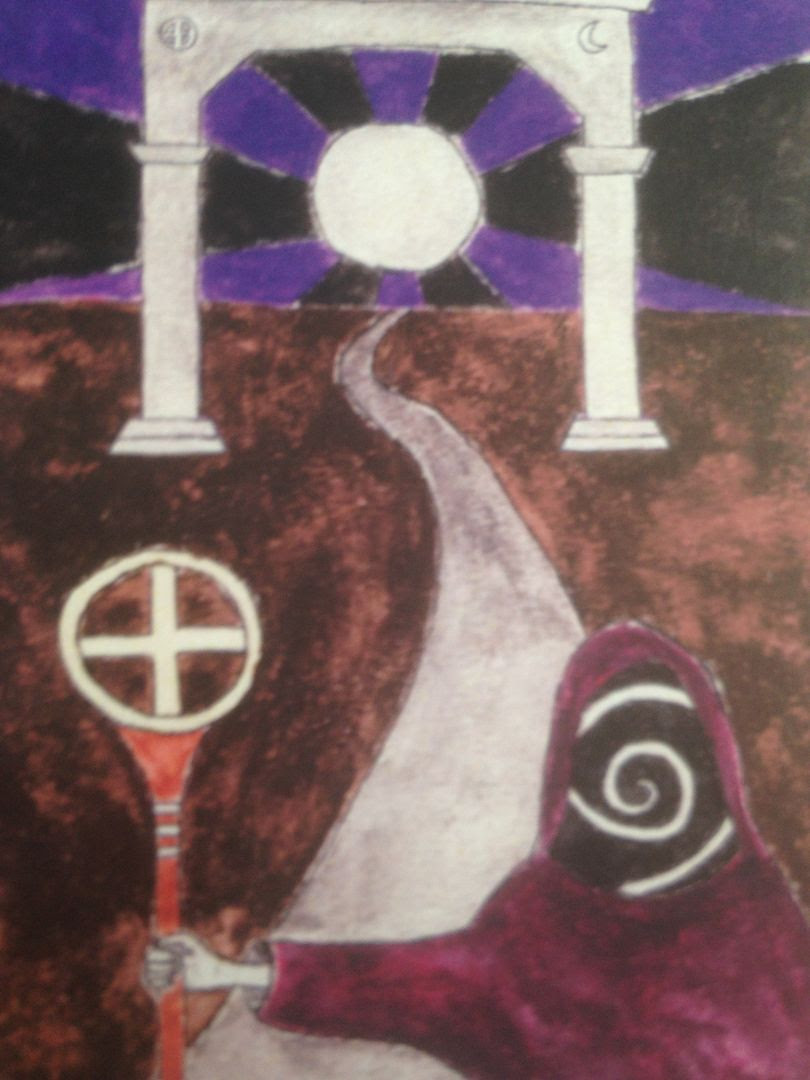 Solo taps begin this cassette and then some scraping sounds come through as well, like we're circling the drain.  Loud guitar notes tear through now, somewhere between Monks chanting and Black Sabbath.   This tapping seems to keep the pace and what I think of as guitar notes twist into ohms.   Sharper notes come through now and they feel like howling.   A swarm of bees now.    Tings now like a triangle or xylophone and that heavy breathing feel makes it seem like "Halloween".   Whispers in the midst of all of this now and it's definitely taken on the feel of a horror film.

Sharpness seems to wind back and forth, the swings which need to be oiled on an old forgotten playground somewhere.    When the whispers are isolated I feel like the words they are speaking are jumbled and so it doesn't seem to make sense.   They sound like the voices in your head, if you're going to think about this as a horror movie and that could be what is wrong the main character who then either has harm inflicted upon himself by someone else or he inflicts the harm on others.

A slower tapping now.  The dragging of a glass bottle.  The soft static of a record player.   This sound is more minimal now.   It could be water, like someone taking a bath perhaps.    Some beeping- minimal electronics- enters the scene now.     There is a sense now as if we are rustling through something, the way one would walk through the woods and crunch on the leaves on the ground and also brushing past them on the trees.   Transformers electronics now, as most of the other sounds seem to take a backseat.

That sound of shuffling stops and starts with this dark video game glitch sound behind it.   It grows much louder and then the swarm of electronic locusts comes in to finish it all off.   A more tribal type of percussion begins now.   It has a nice rhythm to it where it could make you want to get up and dance.   Slow synths come in now with it.   It's slowly waving on in, gradually building to feedback type sounds.   There is this sound of water, kind of like that shaking stick but also as if we are in the rainforest.  The drums help to make me feel this way.

Some static or perhaps crumbling comes in with this, but those drums just make me keep thinking of the jungle, specifically maybe something like "The Jungle Book".   I realize the sounds might not be right on, but it sounds as if there is a flock of some sort of birds flying through the song now.   It could also just as easily be one of those jungle missions like Indiana Jones where you see snakes slithering down trees and you have to use a machete to cut vines out of your way just to navigate through.   There are some voices by the end and it takes on the feel of a jungle cruise but it may or may not be fun for those involved.

Ghost whirrs begin on the flip side and then loud electronic crashes come thundering down.   Screams come through and this sounds like some form of electronic hardcore now.  It's kind of like Ed Gein in the hardcore sense, but overall also a little bit like Fire-Toolz, in terms of artists I've heard more recently since I could also think of Dhampyr /////    This continues to drop these electronic clicks as well as grinding industrial rhythms.    The screams sound so angry and they just paint this image which also reminds me of Backstabbers, Inc.

Louder drumming now makes me think of "Head Like A Hole" era Nine Inch Nails.   This could be off of the "Godmoney" soundtrack for sure as it has that industrial feel and the pace quickens to where I also want to put it closer to "Run Lola Run" as well.   Static comes screeching through and this just builds and builds, faster, faster now pussycat, kill! kill!   The darker bass turns into something more methodical as it reminds me of that Nine Inch Nails song "Where Is Everybody?" or definitely something from "The Fragile".

That all stops now and we have a quiet drone hum.    There are these sort of primal screams coming through, but it also sounds like it could be someone gagging.    Tones come through in patterns which make me feel like this is a keyboard of destruction.   A loud ringing through solo now reverberates as other tones follow.   This has a dark feel to it and then vocals come through but they are processed through that filter which makes your vocals sound deeper, what the kids called "screwed" but I always think of it as like the bad guy from the "Scream" franchise, though it does seem to be a fairly standard voice disguise in film and television.   (Maybe in real life?)

The drums trill as these whimpers of lasers file in behind it.   Dark keys come back and this still feels so haunted.   As the vocals return it feels as if judgment is being passed down upon us.   There is a rather dark sense to this all, which I seem to keep typing, but I feel like it has the makings of a horror movie but in that case it would be a horror movie which involved Satan- you know, some kind of curse where someone summons him or steals his son, something along those lines.    But I do love that this cassette seems to tell a story on the first side which can be a somewhat understated horror movie soundtrack and then the second pulls no punches and will just give you nightmares without question. 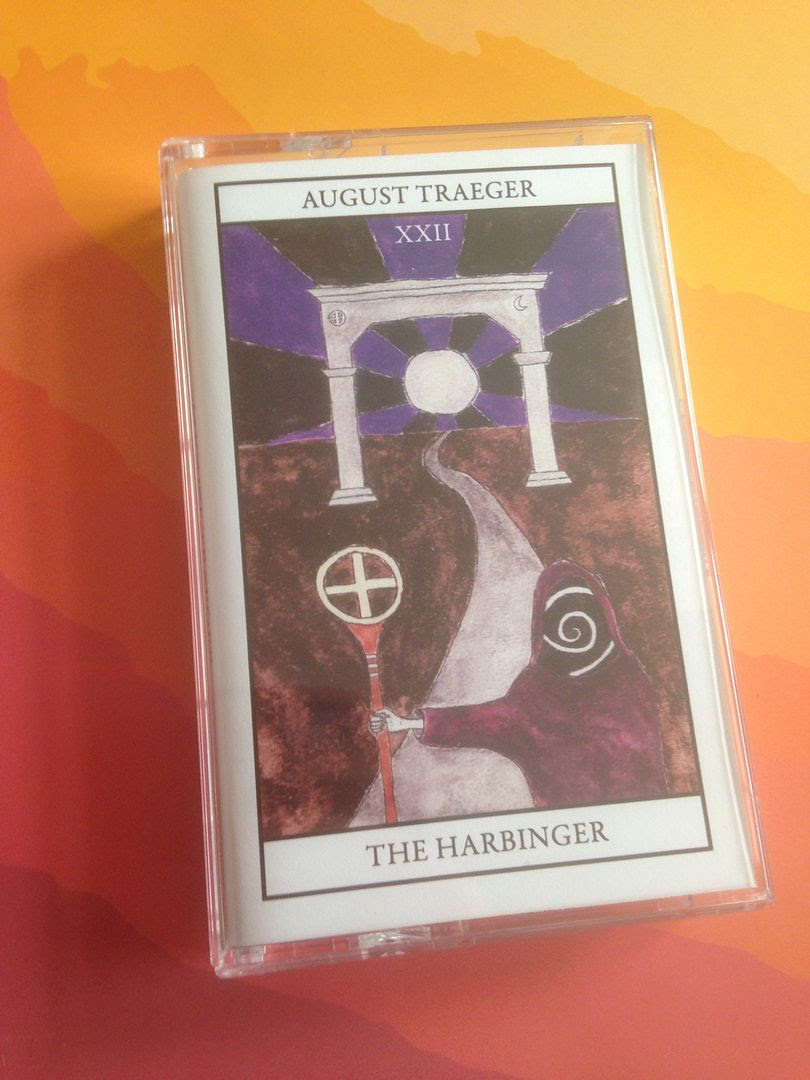 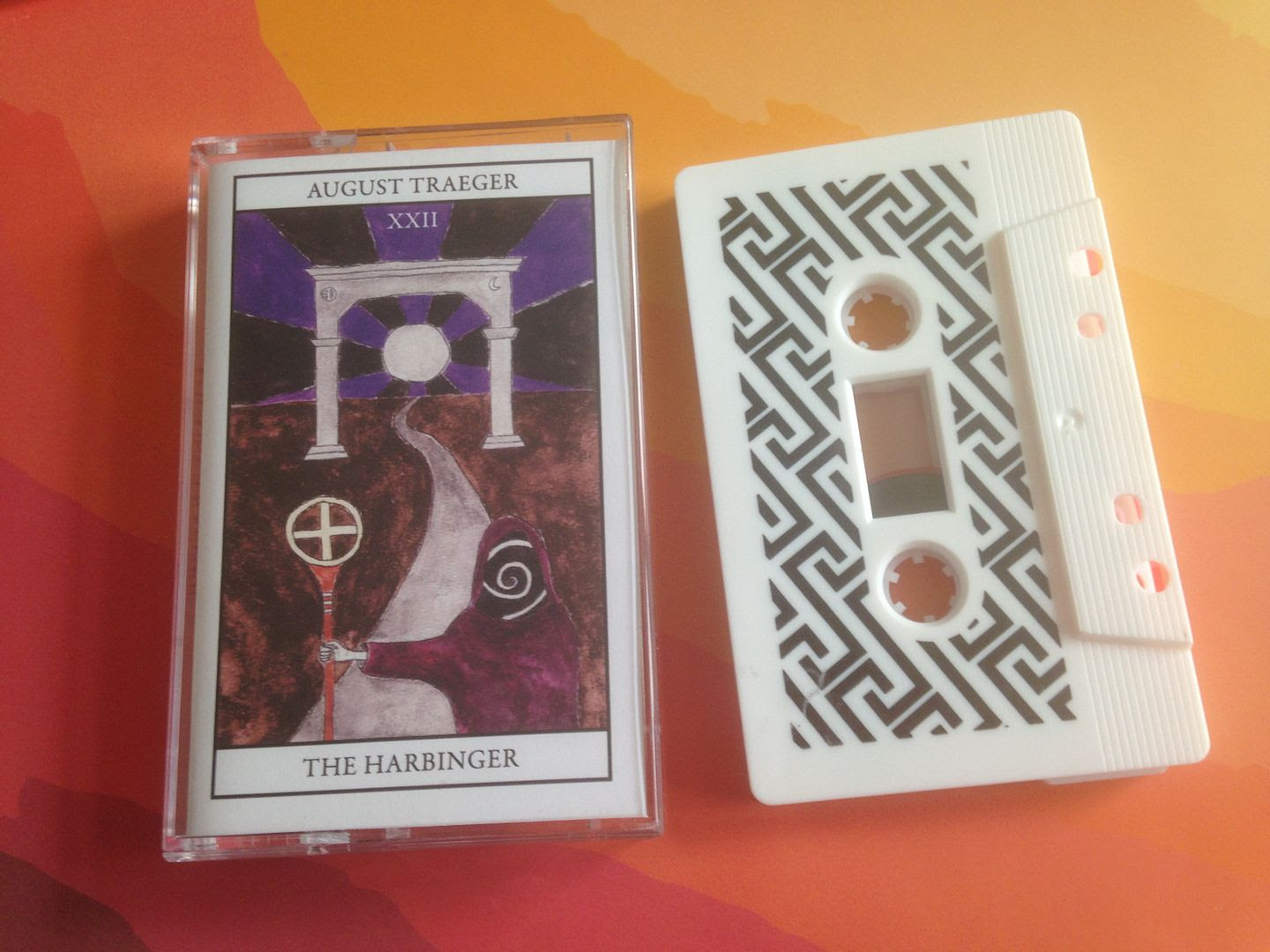 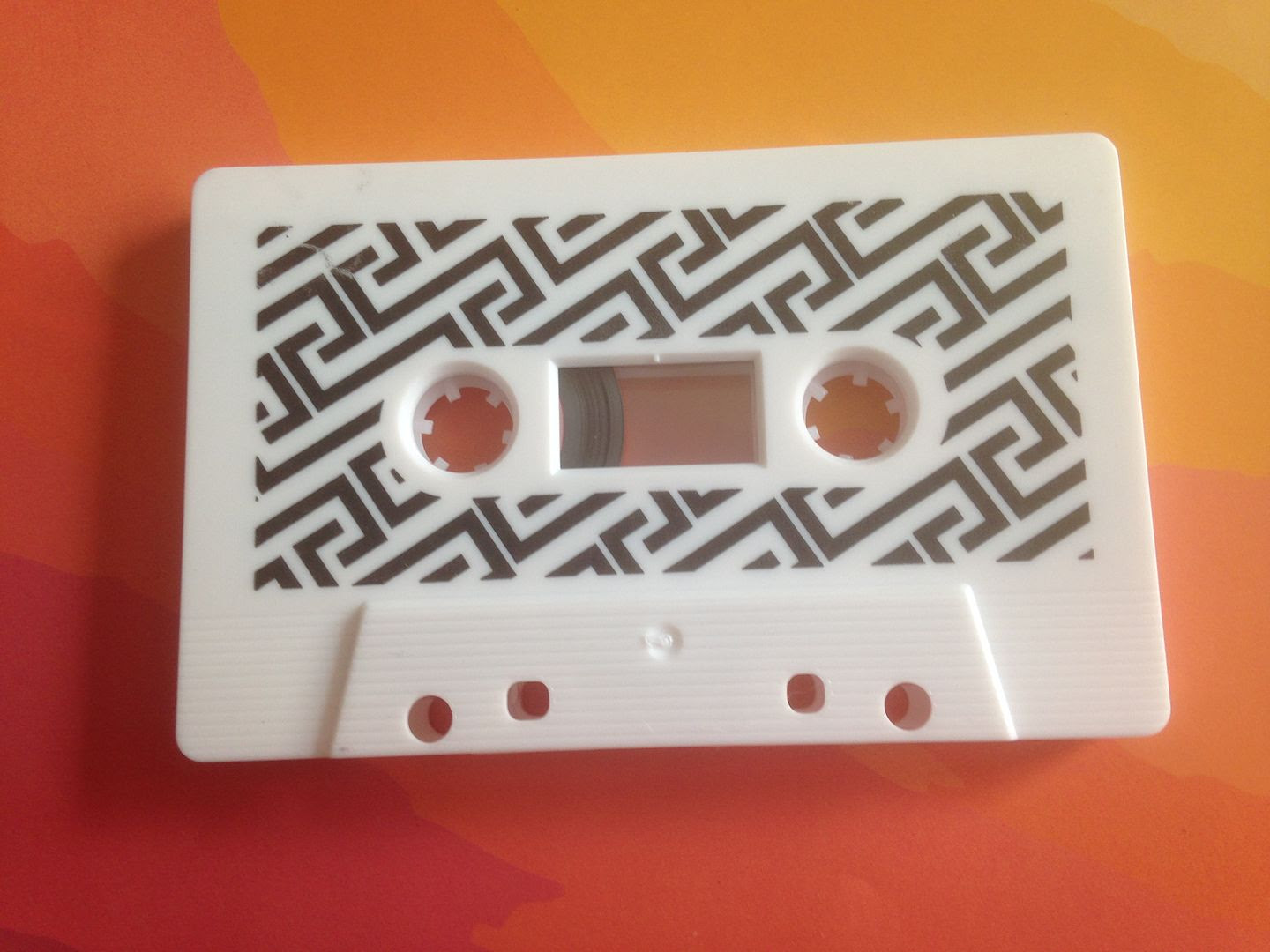 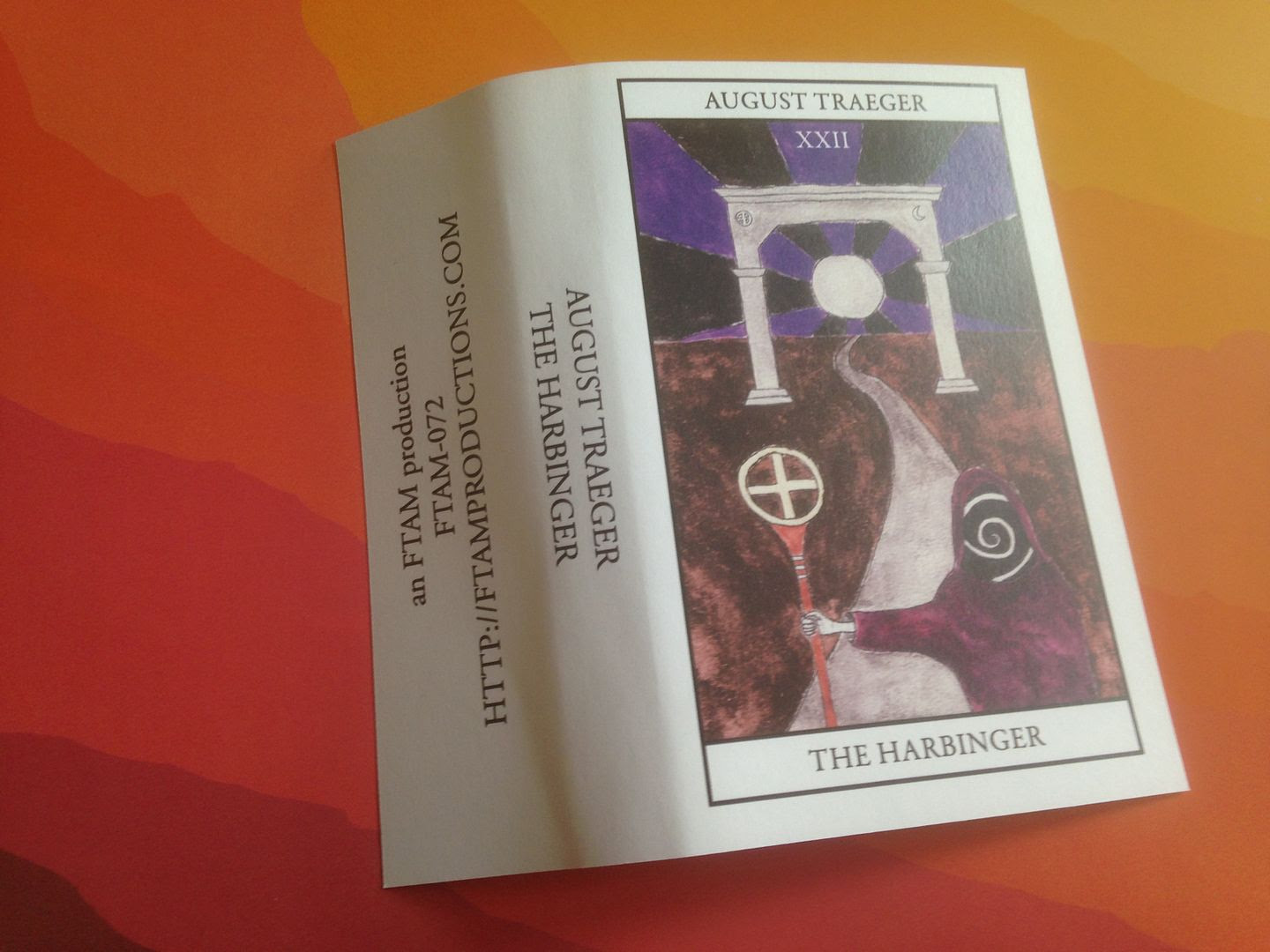 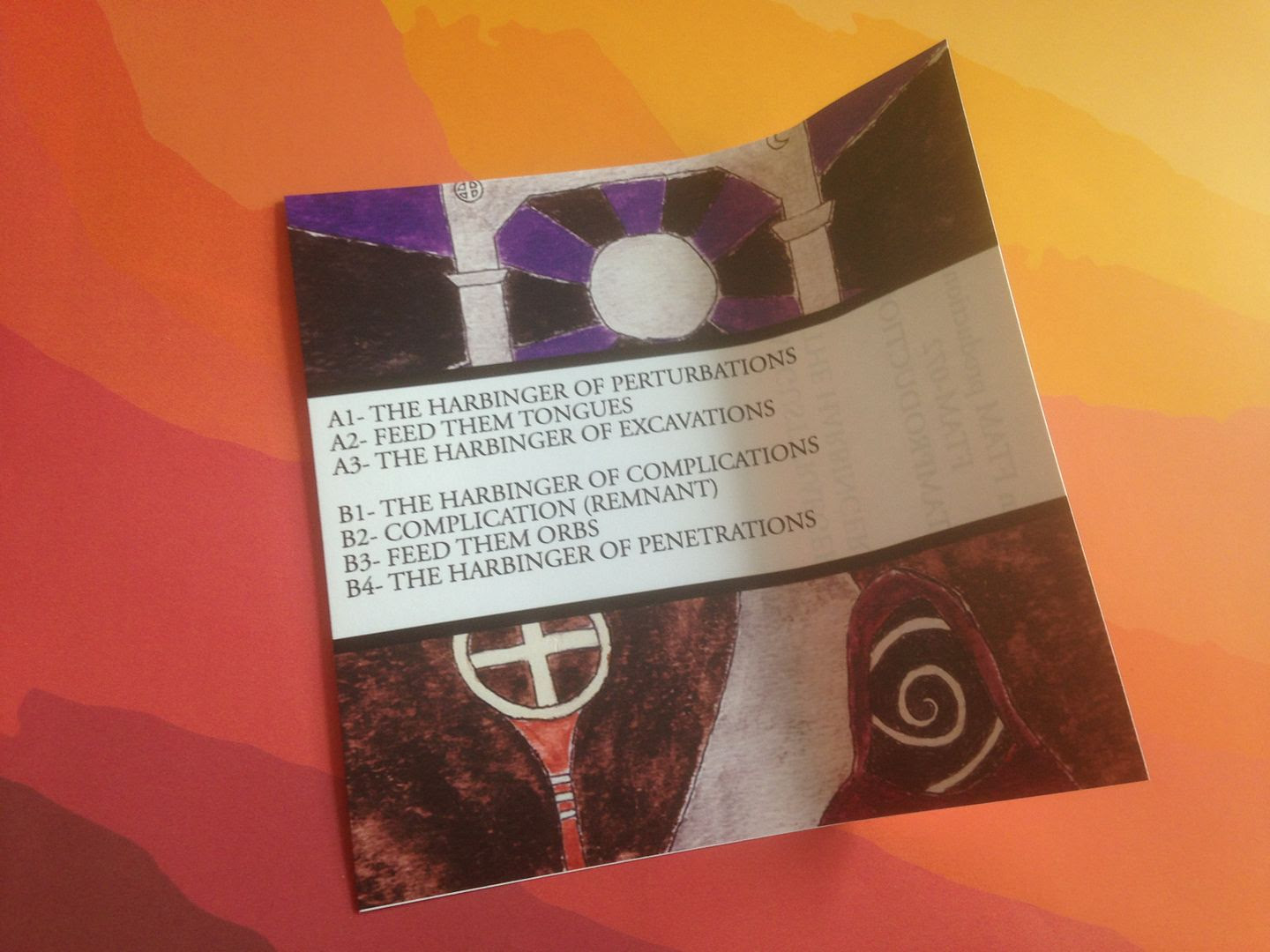