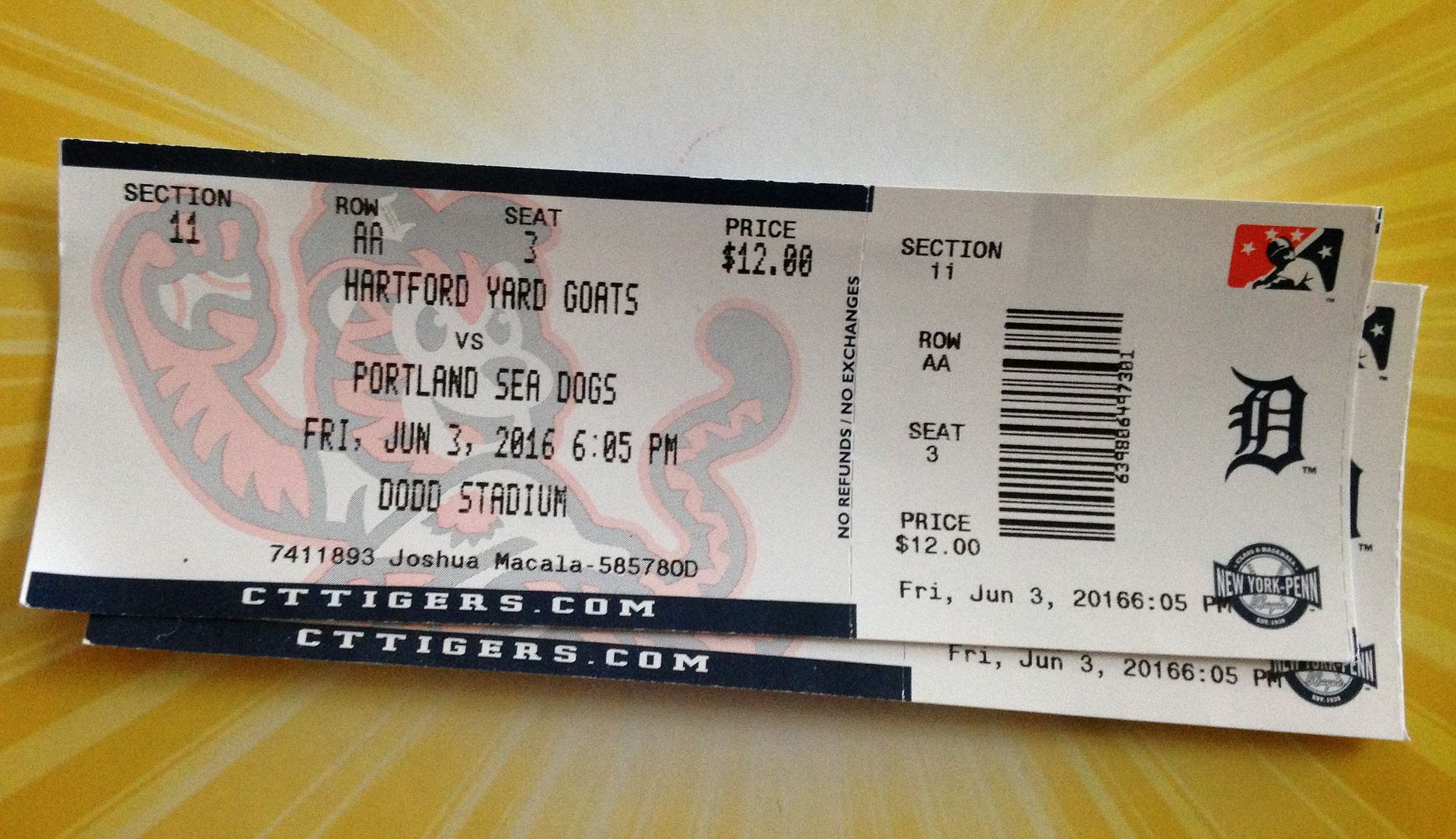 [Please Note: A photo album for this game will appear with the post on either the main site or Baseball sub-site]

As a child growing up in Connecticut, I frequently attended New Britain Rock Cats (and before that New Britain Red Sox) games with my father, but we also did go down on occasion to Norwich to see the Navigators.    The Norwich Navigators were the minor league affiliate of the Yankees, so it didn't hurt matters any that my dad is a Yankees fan either.   I really don't remember much about going to see the Navigators as a kid, aside from actually being at the games and their masot Tater, but they bring back happy feelings like when I found their team set almost a year ago when going through my baseball card (and etc.) collection.

The story of *why* the Hartford Yard Goats are playing games at Dodd Stadium is one for others to tell (And believe me, they're telling it.   As Botchamania says: "Everyone Talks") but I was more than excited to go see them at the home of the Connecticut Tigers and formerly Norwich Navigators.   We had planned on attending at least one Tigers game this season anyway, so going back to Dodd Stadium for the first time in something like twenty years would be an experience in itself, and yet now we get to see the Yard Goats in doing so.

I'm not sure why, but I also had this weird feeling about the Yard Goats playing at Dodd Stadium and it made me really want to see them play there.    It's not just that Dodd Stadium isn't *their* stadium and they were being billed at home, but it's not even a Double A stadium as they play in on the road.    It just seemed so... I don't know.   The only way to explain it is like what I told Gina before I said I wanted to go to the game.   Imagine if the Mets were moving from Shea Stadium to Citi Field and Citi Field wasn't ready yet so they decided to play some games in Brooklyn, where the Cyclones play.   It'd be like that if we lived in New York and went to Cyclones games as a kid.    In a lot of ways it's also just one of those "But when are we ever going to have a chance to do something like this again?" scenarios as well.

Quentin and I made the long drive from 66 to 16 to 2.   It's not really that bad of a drive, but once you get off 2 and the signs begin pointing you towards Dodd Stadium, the trouble starts when you're driving around the industrial complex like a maze.   It's guided the entire time, sure, but it just feels like you're always about to get to Dodd Stadium and at the same time it just feels so far away.  ("Just around that corner... Nope, still another twenty minutes in this industrial park!")

As per usual, we showed up early but I'd always rather be there a little bit early than late.   We picked up our tickets and when we got inside we found that there was no merchandise being sold for the Yard Goats (there isn't really a lot of room for them to set up their tables anyway) but the Tigers store was also closed!   That seems like a missed opportunity.   I was going into this game thinking we'd spend x amount of money on Yard Goats stuff and then x amount of money on Tigers stuff and we didn't get anything.   Oh well.

Chew Chew and Chompers were also absent for this game (Great team spirit, mascots!) and I thought maybe the Tigers mascot would be out as well, promoting the upcoming Tigers games there, but nope, no mascots to be found at this game.   But in the end, it didn't matter because Quentin jumped on the field and took a picture with David Dahl, which I think is better than a mascot because I didn't think we'd see David Dahl at this point in this season, as it seems like his call up to AAA or the majors will happen at any time.

Before the game started, Quentin and I hung out near the Yard Goats dug out and we were the only ones, though a lot of people were over near the Sea Dogs side because they are the AA affiliate of the Red Sox and we weren't really that far from MA.   It was okay though because it just meant no one else would be in our way I suppose.    Quentin got just about everyone who walked by to sign his baseball and it was fun seeing the players from the Rock Cats last season again.    We missed a few players (like Zach Osborne) but we did get a good bulk of them to sign Quentin's ball and the newer Yard Goats who seem like they're going to be stars were all really nice.

It's just strange that I go into baseball games thinking these guys are going to be... not jerks, but just kind of like, "I'm too busy for this".   The Yard Goats starting pitcher actually told us he couldn't sign but that was understandable because he was the starting pitcher.   But everyone else was just super nice and they really went above and beyond what they should have- especially (as always) David Dahl, Ryan McMahon, Corelle Prime and DIllon Thomas.    I've been reading about a lot of these guys thinking they'd feel like superstars in their minds already but they were all very down to earth.   Even Corelle Prime said he'd sign after stretches and he came right back and did.

The funny thing is, when David Dahl came out he was with two other players.   And so Dillon Thomas stood next to David Dahl for a little bit, waiting to sign after Dahl did, but then when he saw us open the little gate to get Quentin on the field, DIllon Thomas was like, "I'm out" and went to do his stretches.   On his way back from stretches though, he was more than pleasant when it came to signing and I think that's one of the best qualities of this young, winning Yard Goats team-- they're still fairly humble.   That is going to benefit them more than perhaps anything else in the long run.

When I ordered tickets, I just picked whatever the best seats were available as the pricing options went from $10 to $12 and I figured why not pay the $2 more and sit in closer seats.   I had no idea where we'd be sitting so it was somewhat surprising to me when we found our seats.   I thought we were going to be on the visitor's side, but we ended up pretty much directly behind home plate.    It was nice because Quentin was behind the net (And we had a few balls fly back at us) but also because we were just so close to the game it was scary.   I've grown so used to sitting in the same seats at New Britain Stadium, I feel like I want to start just picking "best available" and see where we randomly end up at games.   It gives you a new and fresh view of each game probably.

So, if you can't tell by the score, the Yard Goats crushed it.   They just shut down the Sea Dogs.   I don't know whether the Sea Dogs team got worse from last season or not, but the Yard Goats have obviously improved as they spent a lot of time in first place and undefeated, so this didn't even seem like a fair game.  The Yard Goats would seemingly get into trouble, turn a double play and get out of the inning.   Scoring three runs in the first inning also helped to set the pace of what the Yard Goats were there to do and, yeah, it's nice to see them winning.


I always said that we'd likely go to Hartford to see the Yard Goats during games such as when they play the B-Mets and when Shane Carle or Ryan Carpenter were pitching (both of whom moved up to AAA this season), but I think when the opportunity presents itself, going up to Hartford early enough on a Friday might not be so bad for traffic and we should be able to do it (same for Saturday, as Friday and Saturday are my days off for the foreseeable future) so I am now really excited to see what the Yard Goats have to offer at home this season and, yes, I am also eagerly awaiting the opening of Dunkin Donuts Park, like everyone else.     I really just want to watch some baseball. 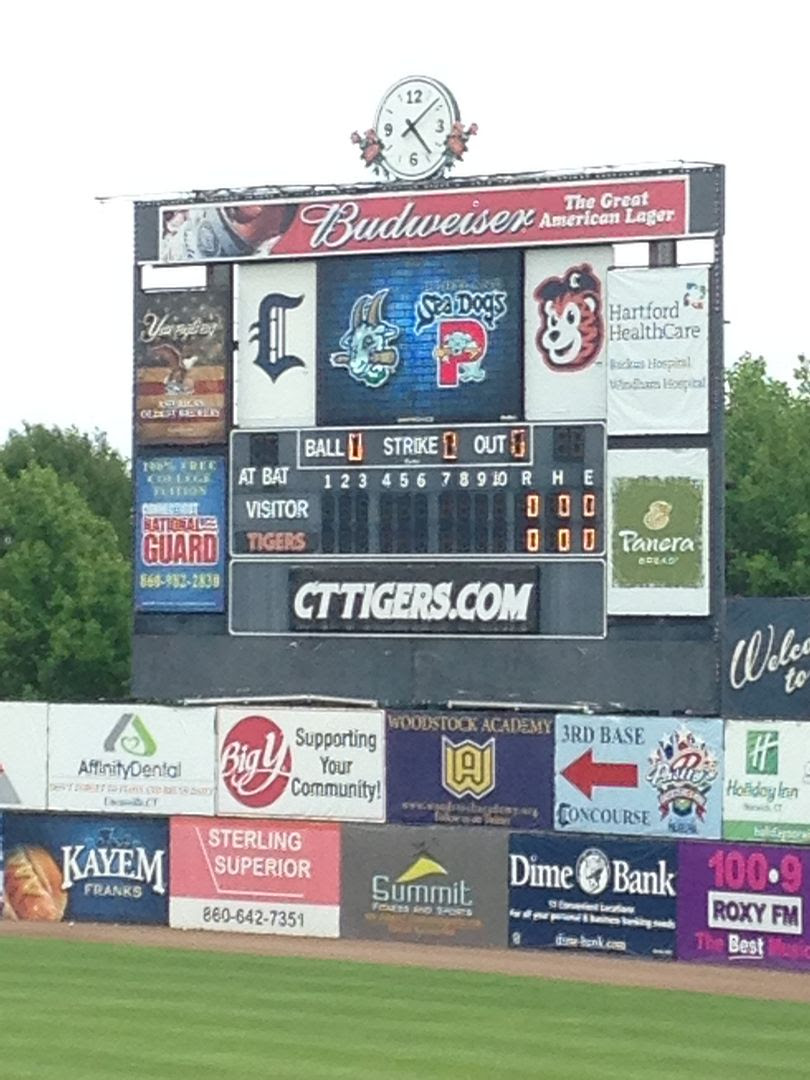 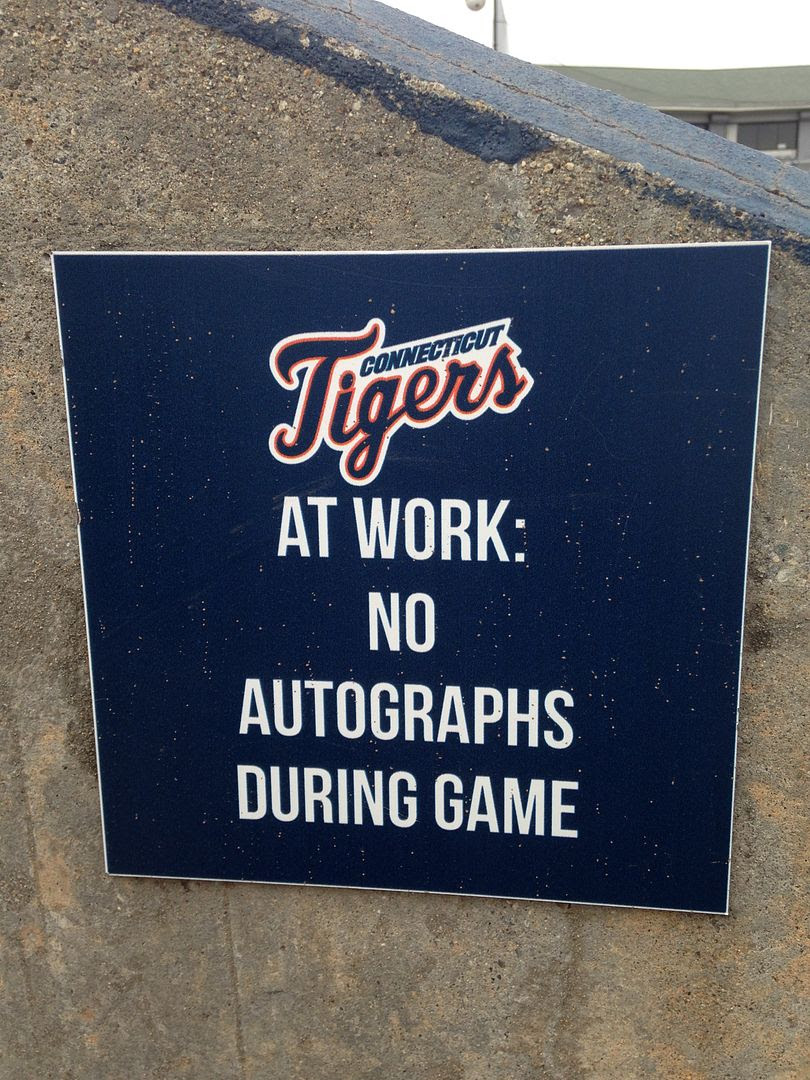 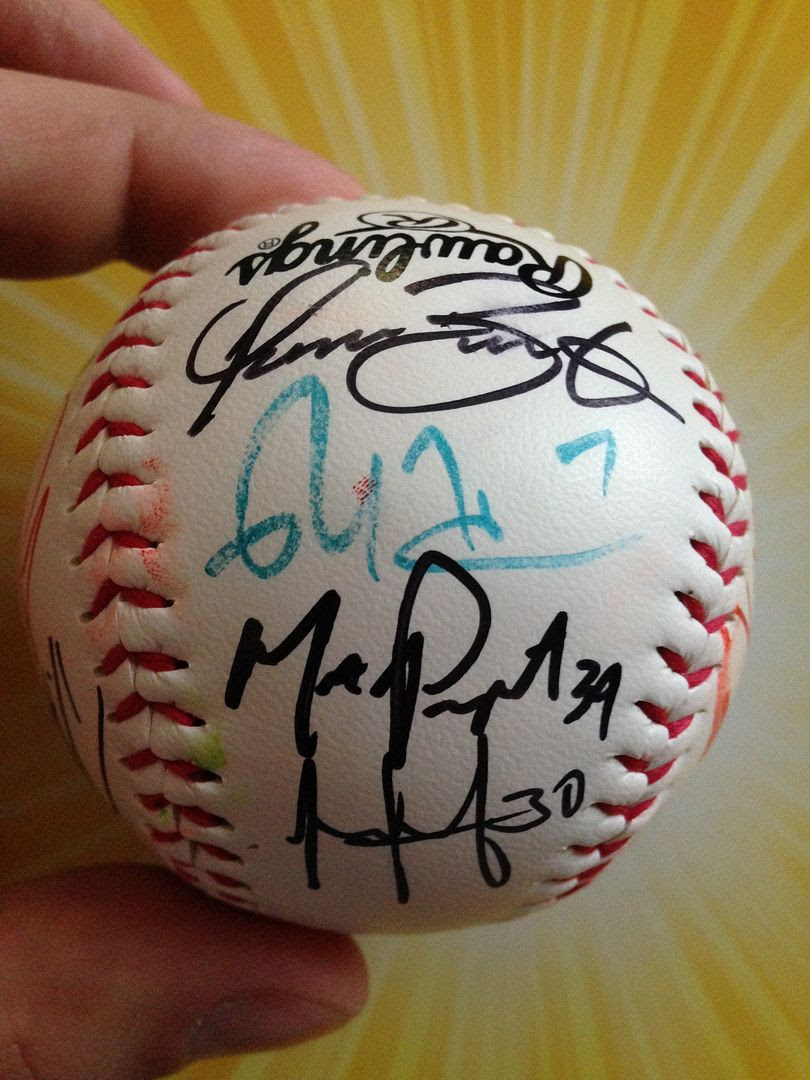 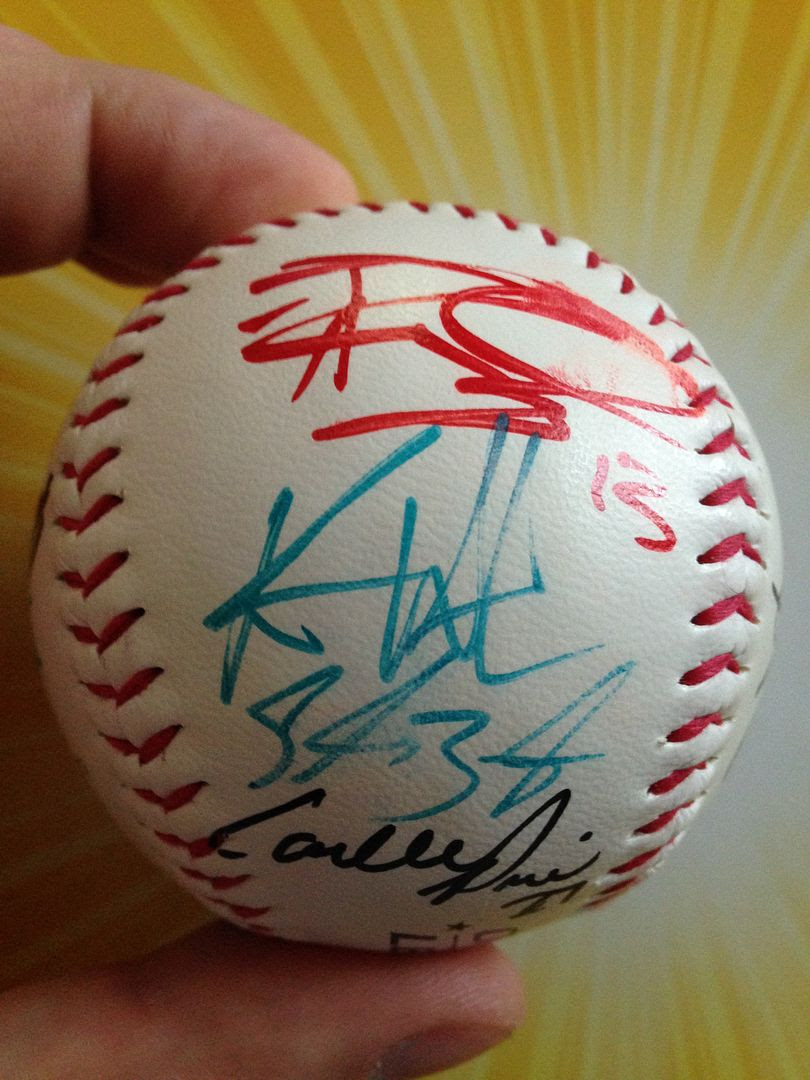 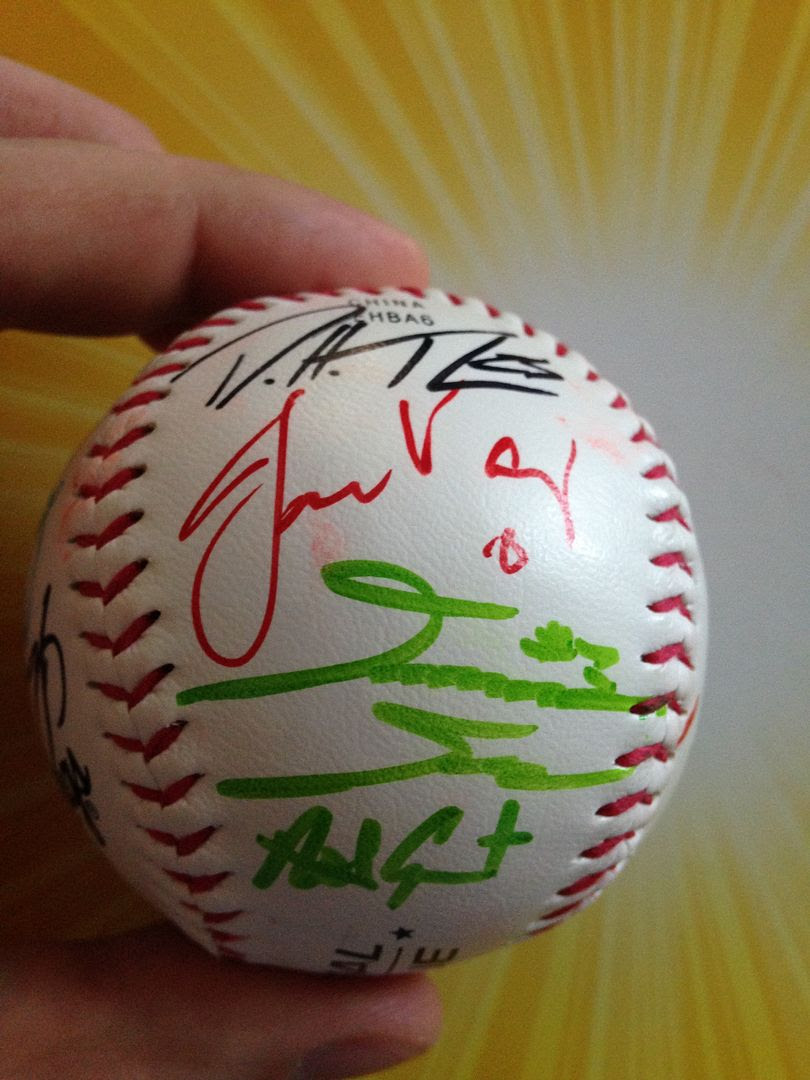 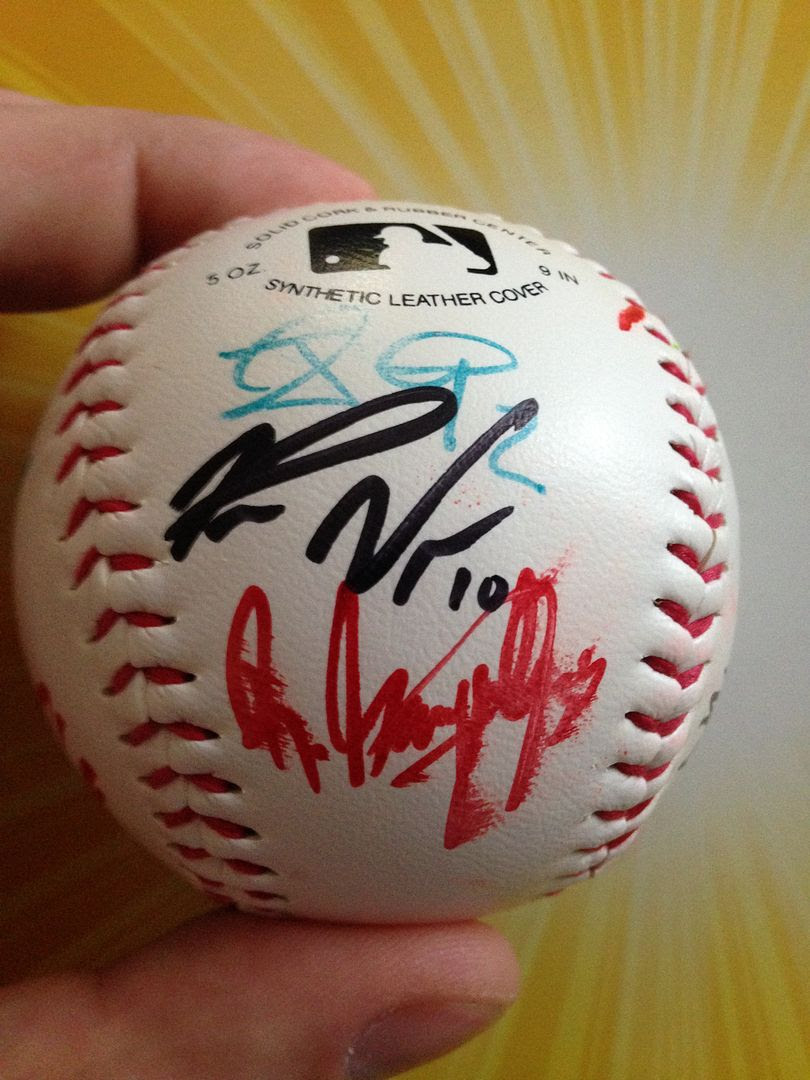 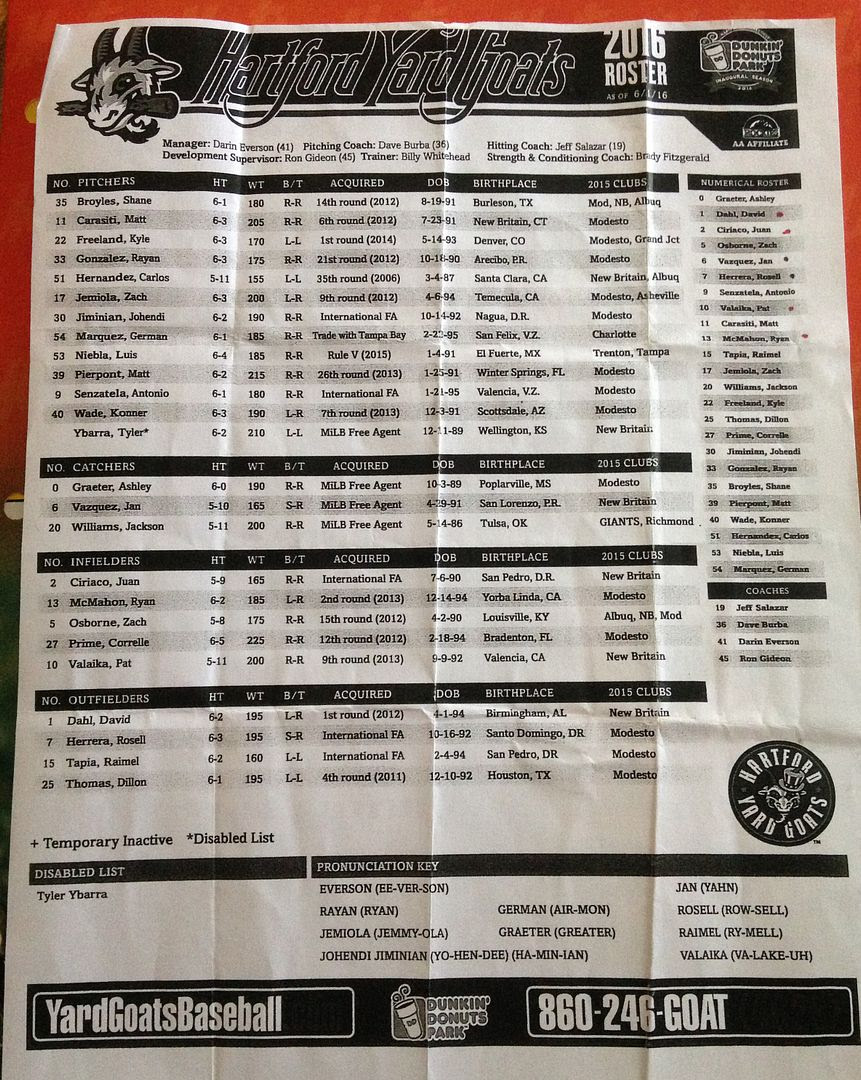 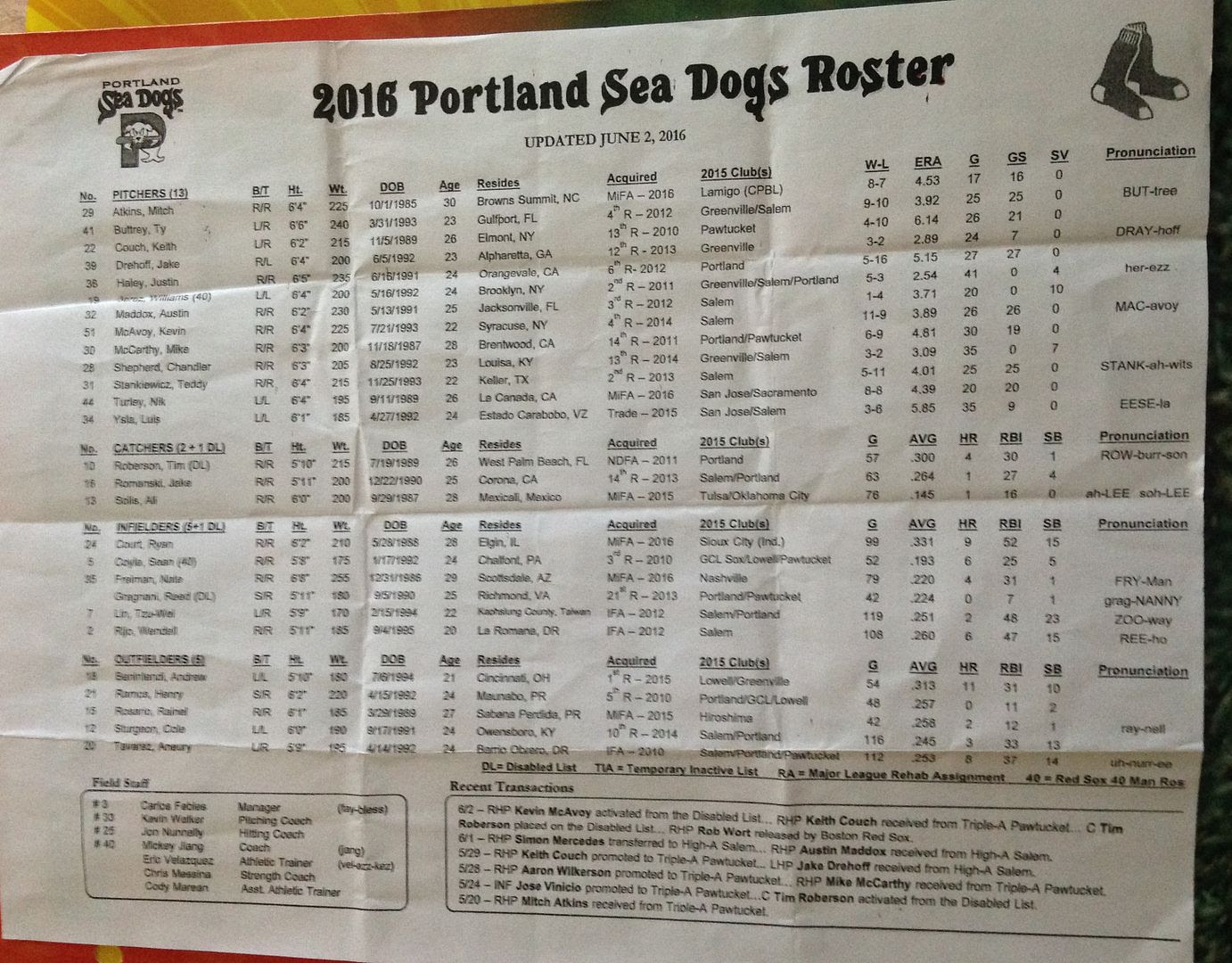