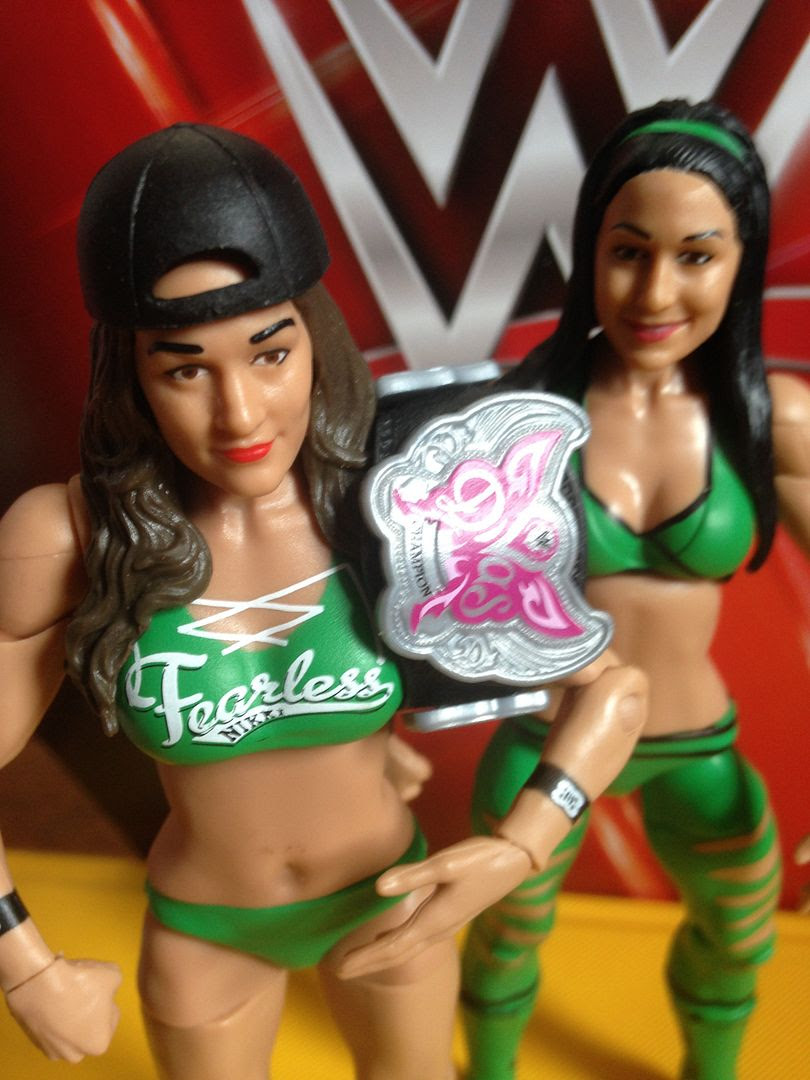 After an unsuccessful trip to Toys R Us we went to a nearby Target and found this newest set of Battle Packs.    There were two sets of each from this series and I passed on the Bray Wyatt/Undertaker set because Bray's face looks bad.   This is my first time finding The Bella Twins in stores.   I do believe that they've had two releases before as Battle Packs, one pretty early on, and they both had recent single releases which I didn't see in stores either but I didn't really want to buy one Bella without the other anyway.    While I was surprised to see two sets of The Bellas at Target I can only wonder if they will be in short supply when they come to Walmart.   Usually Walmart overflows with the Battle Packs so it will be funny to see multiple sets hanging out in a store.

The best part about these figures is that even though they are in different attires, Nikki has her name on her somewhere and so it makes it really easy to tell them apart.   Take that, Usos and Los Matadores!   Quentin wanted the Bellas to put with Alicia Fox to form Team Bella but otherwise, I mean, there really isn't a good reason for me to have these two.   In the ring I pretty much dislike everything about the Bellas.

Anyone who ever says "Yeah, but..." in defense of them I just have to point out the feud between the two, how one wished the other died in the womb and, well, then how they went back to business as usual a few weeks later as if nothing had ever happened.   It was... bad.

Does anyone else find it funny that Nikki comes with a hat and the Divas Title while poor Brie comes with nothing?  I mean, sure, we can put her into Brie Mode, but who really cares about that.    The thing I like about these two is that they are in green and we don't really have a lot of figures in green so it helps them to stand out from everyone else.  (I think most of our figures are in black or mostly black)  Also, we have Alicia Fox in red so when you put them together they kind of make Christmas.

I don't think this is a Battle Pack that anyone really *needs* but mainly I got it so that we could put together a divas revolution eventually.    There are still some missing pieces between the three teams Stephanie McMahon broke the womens division into, but hey, we do have Stephanie!   I also think that this "basic" version of the Divas Title is funny looking compared to the "elite" version that came with Paige.   It's like Nikki Bella has a toy title belt compared to Paige, but, yeah, real life reflects toy life and all that. 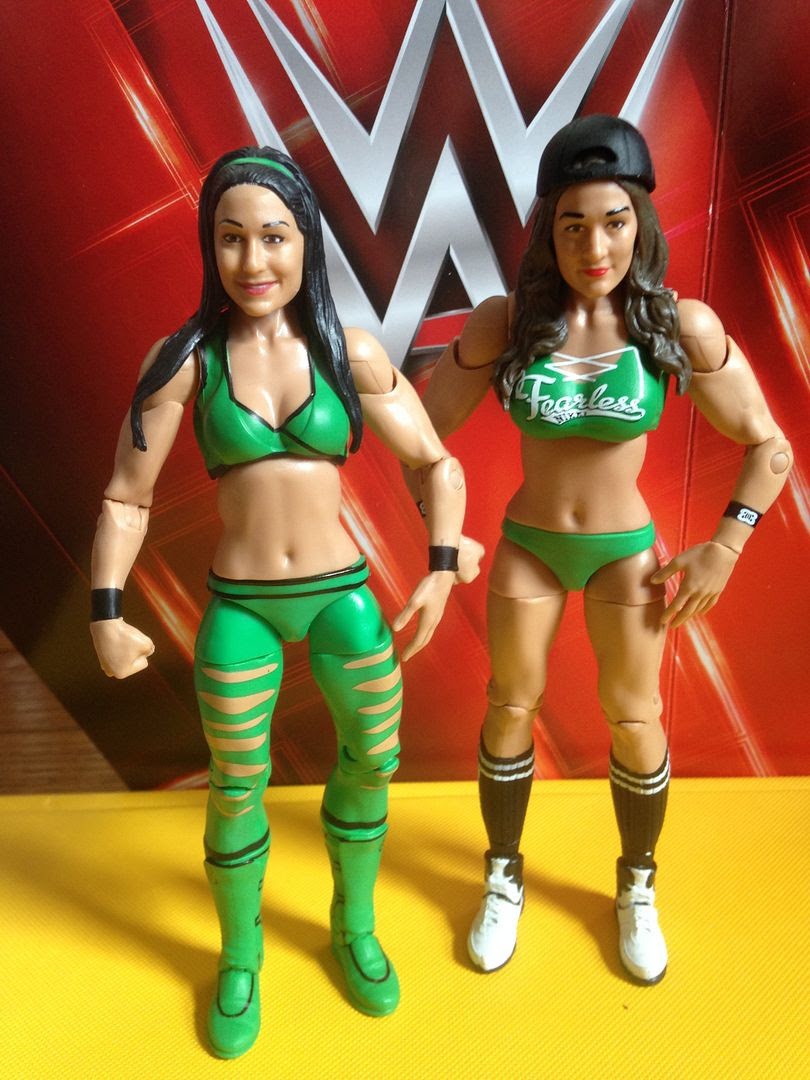 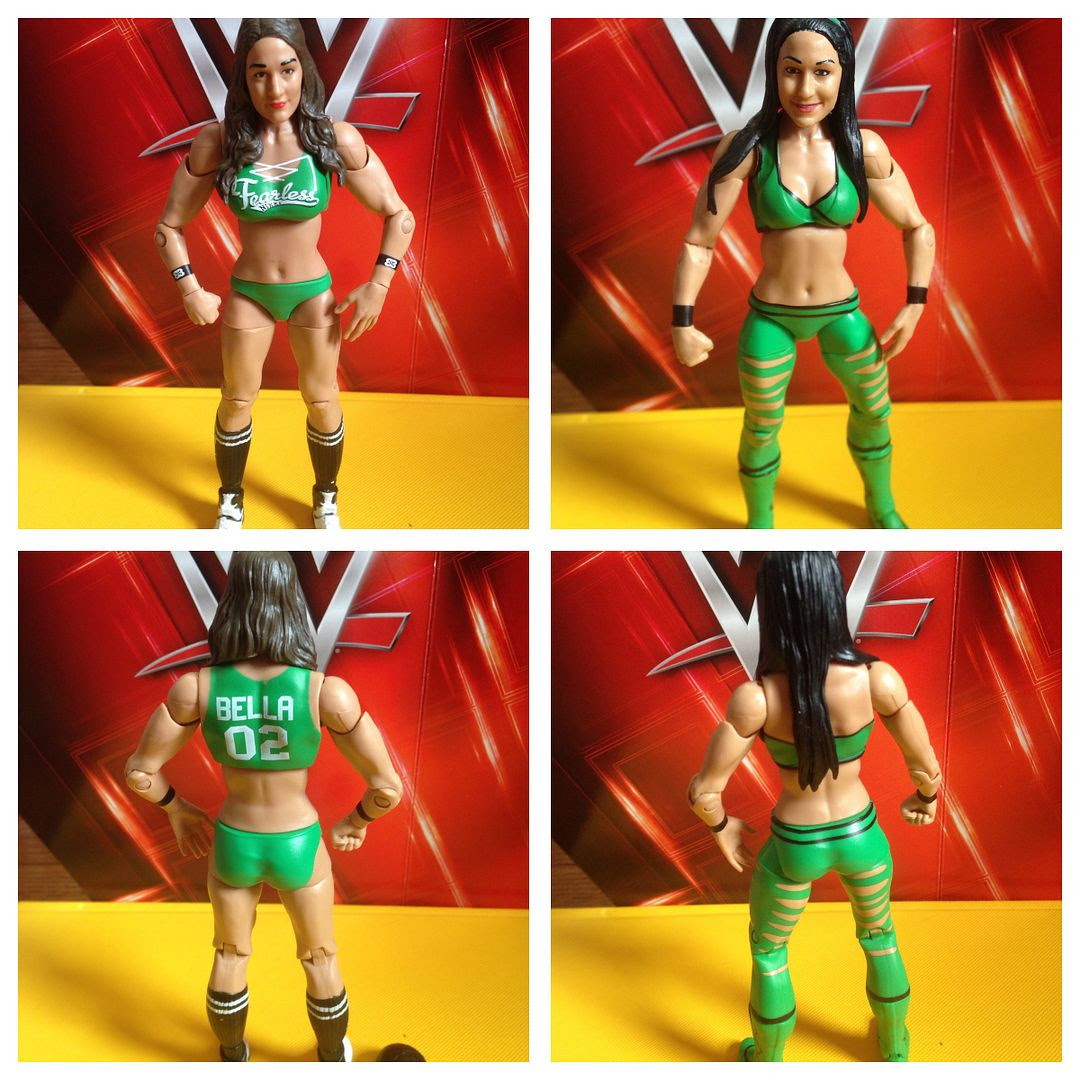