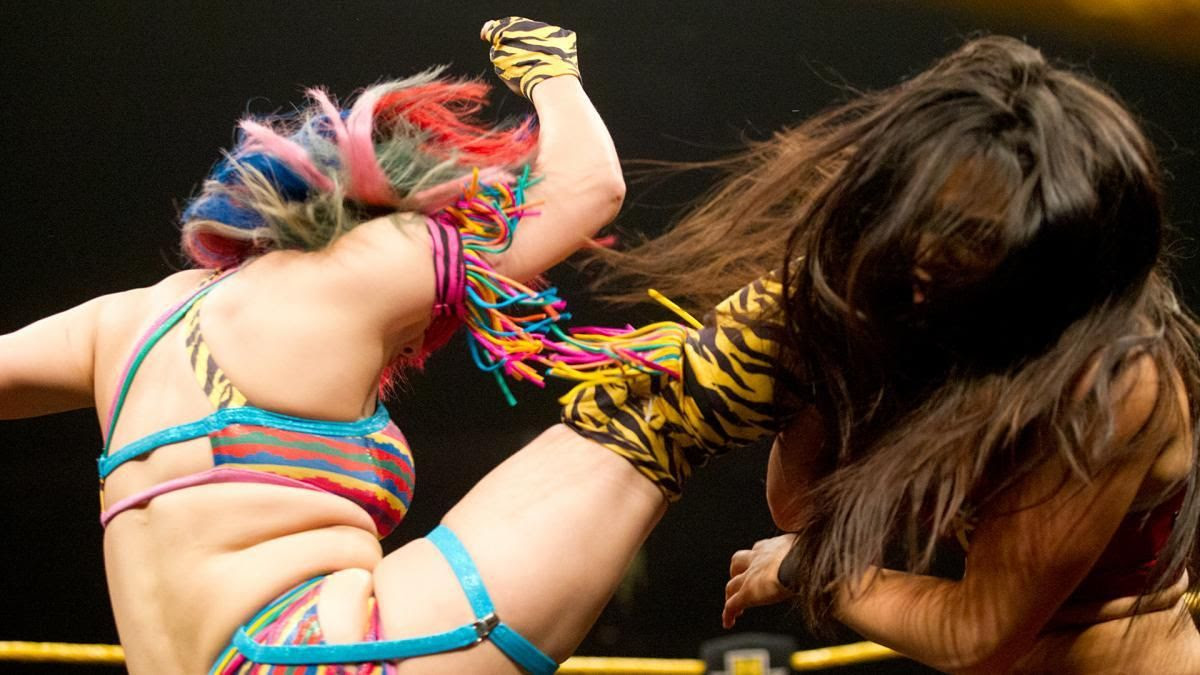 We begin Loose Cannon Fodder this week with ROH TV # 230 which we technically watched last week but are just getting around to writing about now.     The Top Prospect Tournament continued with Lio Rush vs. Jason Kincaid and as far as I'm concerned that could have been the finals right there it was that good of a match.    The commentators played up how Lio Rush had only been in the business a few years but was better than those who had been in there much longer- according to his peers and coaches and what not- and for some reason I feel like he's some wonderful combination of Ricochet and AJ Styles.   Really, it's like WWE signs these big names and then ROH is just going and replacing them.

Then we had a throwaway tag team match, which yes, showcases the tag team divison and all, but why should I care about Silas Young & Beer City Bruiser vs. Caprice Coleman & Will Ferrara (or anything involving these four men for that matter?  Give me Dalton Castle or GTFO)    Bj Whitmer came out with Adam Page and wanted to know who Steve Corino said wanted to face him.   Whitmer turned around to a predictable turn by Adam Page.  I'm not sure why Page didn't just jump him from behind but I guess it's some sort of code of honor thing.   Ah well.   Where's Jimmy Jacobs when you need him?

Mark Briscoe scored a win over Tm Hughs *yawn* and then in the main event the team of Matt Sydal & ACH defeated the Young Bucks.    I think teaming with ACH is the best thing Matt Sydal has done since leaving WWE and probably the best thing ACH has done just overall as well.   So I like this tag team and I like to see Young Bucks lose because I don't really like them, so there's that.   But what does it say when the best match on your show is in the Top Prospect Tournament?  It tells me that you need more Dalton Castle.


We still haven't watch the new Lucha Underground yet but did watch the latest episode of Raw, which was the go-home show before Fastlane.   AJ Styles defeated The Miz and then put a challenge to Chris Jericho for Fastlane, which Jericho said he had to think about.   For some reason I had to watch an exchange between Charlotte and Brie Bella, which was as painful as it sounds.   And, well, when I checked the time and realized I was really only waiting around for the end of Raw to see Big Show vs. Braun Stroman I realized that pretty much sums up the type of show it has been.     So I'm not sure how to condense Raw to something less than 90 minutes but perhaps I should just start watching the AJ Styles segments until 'Mania?   Kevin Owens also won the Intercontinental Title in a five-way match but even that felt stale already.


On NXT, WWE showed how wrestling should be.   An eight man tag team match opened the show with Enzo & Big Cass & American Alpha vs. Blake & Murphy & Dash & Dawson.   I'm fine with Enzo & Cass as a tag team name and I don't even mind Dash & Dawson as a name, but Blake & Murphy need a name.   The whole "Edge & Christian" thing should be done and we should be onto tag team names like, well, American Alpha.    I'd say that Blake & Murphy should change their name to The Freddykrugers but that doesn't seem productive, right?   Still, they need a name.   Also, Dash & Dawson had that old Tito Santana and Rick Martel jackets while American Alpha had new gear which reminded me of Marty Jannetty but not during his Rockers run.

Also on NXT Deonna Purrazzo- who was once on NXT and Impact at the same time- took a hard fought loss to Asuka.   I'd say that they're bringing in people to face Asuka from the outside because the current women in NXT (and probably even on the WWE main roster) can't handle her style, but I'd just be repeating myself from last time when it was Asuka vs. Santana Garrett.   Asuka vs. Blue Pants soon?

Alex Riley also came back and lost to Tye Dillenger, so by my count now A-Ry has been back twice and lost both times.   Why even bother, man?  With is hair long like that it looks like a mullet and that makes me think of Chris Benoit.   Not cool, dude.   Not cool.   I do enjoy the fact though that it seemed like as many people as were cheering for Riley were booing him and Tye even got a nice pop when he won.   Doing the whole "ten" thing with your hands is way over in NXT right now and A-Ry... Well, he's always going to be the bland sidekick to The Miz to me.

On another note, I must note that last week I thought when Asuka was staring down Bayley the crowd was chanting "divas suck", a shot at the main roster women, but as I watched the replays this week I realized they were saying "Eva sucks", but, I mean, same thing, right?

In the main event of NXT, Samoa Joe and Sami Zayn wrestled to a draw as both men had valid claims to their shoulders being down and, well, I mean, really, if we're not going to go with a triple threat at the next big NXT event then what is the point of all of this?  So far, both Samoa Joe and Sami Zayn have been involved in two- yes, two- matches where neither of them has been a clear winner.   So if it takes either Joe or Zayn a third time to defeat the other then what are their chances against Finn Balor?   It's like, how can you beat Balor in one night when it took three different matches for you just to become number one contender?  It kind of makes the whole idea of being number one contender feel worthless but I'm still enjoying these matches because I love seeing Joe throw Sami around like a ragdoll.


As WWE is on their way to Fastlane, next week is that time of year again when TNA likes to have all of their matches inside a cage.   I feel like this show was a bit of a waste because we saw a lot of set up for the matches for next week but also couldn't we have saved the Monsters Ball for next week and just used all of those weapons in the cage as well?   I guess maybe Impact is only going to be two hours still next week so they don't have the time, but the card looks all right and will hopefully give Impact Wrestling the shot of adrenaline it so desperately needs.

Also, when I said that the Feast or Fired match didn't matter because whoever gets fired always comes back, yes, I knew Grado would be back.   I just didn't think he'd be back this soon.   If TNA still had action figures being made it'd be interesting to see a Grado somehow made with removeable mask so we could also have Odarg the Great.   Or, you know, just get a figure for each of them.  But yeah, Grado isn't fooling anyone and neither is TNA.   This creative direction lacks the, um... What do you call it... Creativity.

Smack Down! seemed like a rather long match between Chris Jericho and The Miz, only for Jericho to finally accept AJ Styles' challenge for Fastlane, Sasha Banks vs. Tamina which ended with Naomi getting involved and Becky Lynch making the save to no reaction and the main event of The Dudley Boyz vs. Tommy Dreamer and The Sandman... Or, um, Roman Reigns and Dean Ambrose, who both got destroyed by Brock Lesnar.   Main Event was a bit more interesting, as Zack Ryder teamed with Neville to defeat Stardust and Tyler Breeze, Natalya tapped out in a decent match to Paige and then the Social Outcasts took on The New Day in the main event.   Somewhat of a better show than Smack Down! I'd say.


We finally got around to the third episode of Lucha Underground (Season 2)   Kobra Moon made her debut and defeated Bengala, kind of throwing everything out the window that I said about how it wasn't a big deal PJ Black didn't win his debut.    Jack Evans defeated Drago and declared himself The Dragon Slayer.   It's nice to see Jack Evans get some sort of direction with his character since he's so great in the ring.   And in the main even, Fenix defeated King Cuerno in a Last Luchador Standing Match.   That was actually a really good match that you should go out of your way to see.

Once we checked out of The Temple we saw Cortez Castro (Remember him?) sitting with a woman called "Captain Vasquez" and they talked about how he was deep undercover and was trying to take down Dario Cueto.   Wait, what?  Castro is a cop?  So then he says something casually about how he wanted Cueto because he fed Bael to his brother and now Bael is dead.   Well.  That escalated rather quickly.  I mean, I know things have been implied in Lucha Underground before, but even though Drago left once he still came back.   But for them to just throw out that Bael is dead like this and to do it so casually kind of caught me off guard.

So, anyway, Cortez Castro is told he has to have a partner with him now and this brings in Joey Ryan.   Joey Ryan is a cop, y'all.  I don't care about his former tag team partner Karl "Machine Gun" Anderson signing with WWE (And you can watch the Lucha Libre show they were in together on Hulu) this guy was trending because of some move he does with his penis, he was briefly in TNA and feuded with Al Snow or whatever but now I feel fairly confident that Lucha Underground can do him justice, if you'll pardon the play on words.


This was also an exciting week for wrestling outside of the ring as WWE announced a Global Cruiserweight Tournament to air on the WWE Network and, well, it will certainly be fun to see who they bring in for it.   My number one pick right now would be Jack Evans if AAA/LU don't have anything against him doing so.    I'm going to hopefully try and have Lucha Underground episodes 4 and 5 next time around but there might also be a lot of thoughts on Fastlane so we'll just see where things go from here.

Posted by Joshua Macala at 1:19 PM