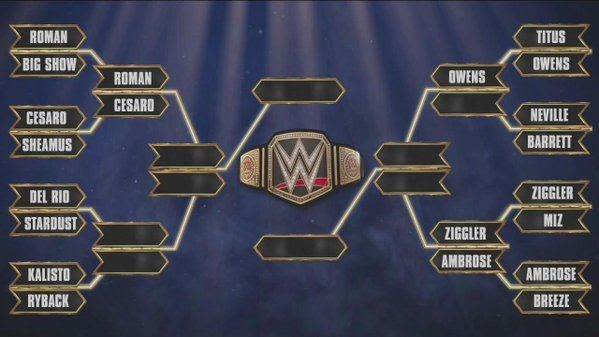 It's Tuesday morning and the brackets of the WWE Title Tournament are full.   Some of the matches have already been won and lost while others will be taped later today to air on Smack Down! this Thursday night.    It will all come to an end at Survivor Series and, yes, this is how I would book it but also my lingering questions of the tournament participants in general.

Let's begin with the left side.   Roman Reigns has already defeated Big Show to advance and Cesaro defeated Sheamus.     Please keep in mind that none of this might matter as Sheamus still holds the Money in the Bank briefcase and could cash in at Survivor Series after the final match.     The other first round matches include Alberto Del Rio vs. Stardust and Kalisto vs. Ryback.   I don't think any of these four men have potential to be WWE Champion, at least not right now, so let's give fans something they want to watch.    Alberto Del Rio will defeat Stardust because WWE has no idea how to utilize the character of Stardust as a proper villain right now and Kalisto will pull off the upset victory over Ryback because no one wants to see Ryback any more than they absolutely have to in the ring.    Alberto Del Rio seems like a good match on paper, right?    The winner of that- probably Del Rio- will advance to face the winner of the Roman Reigns-Cesaro match.   I wish I could say that this is when Cesaro scores a huge upset but if you don't see Reigns going to the finals of this tournament then you haven't been watching WWE closely enough.

I'm still not sure how Kalisto got into this tournament though.   Not to discredit him in any way, but he has been featured in WWE as a tag team wrestler (And what puts him in the tournament over Sin Cara?  Did they have a match to decide who'd be in the tournament on Main Event and I missed it?)   Why isn't Bubba Dudley in here after he threw his name into the hat when a tournament was announced?   This could be the singles run Bubba needs in WWE because, let's face it, the nostalgia of The Dudley Boyz is only going to take the team so far (by Wrestlemania next year it will likely have run its course)   But, no, WWE gives no reason as to why Kalisto was chosen over Sin Cara and why Bubba Dudley was not placed in the tournament either.    So we have Roman Reigns vs. Alberto Del Rio in the semi-finals, which of course leads to Roman Reigns in the finals.

On the other side of the brackets we have Kevin Owens advancing over Titus O'Neil (Read about the Lucha Dragons thing and apply it to Prime Time Players here) and he will go on to face the winner of Neville vs. Bad News Barrett while Dolph Ziggler defeated The Miz to face Dean Ambrose who defeated Tyler Breeze.   So Tyler Breeze will obviously cost Dolph Ziggler his match, thus helping the man who knocked him out of the tournament but it doesn't matter.    Dolph Ziggler vs. Tyler Breeze at Survivor Series.    Neville should be able to get by Bad News Barrett if only because Neville vs. Kevin Owens makes for a more interesting match up (such as ADR vs. Kalisto on the other side) which Kevin Owens will win and then go on to face Dean Ambrose in the semi-finals.    Keep in mind that much like Alberto Del Rio on the other side of the brackets, Kevin Owens needs to be somewhat protected in this tournament since he is also a title holder.

It should come as no surprise, but Dean Ambrose will defeat Kevin Owens and go on to the finals to face Roman Reigns.    The match will be filled with speculation as two best friends face off for the richest prize in the game, that idea of Roman Reigns selling out to HHH and The Authority lingering in the background.    But, of course, when we get to Survivor Series and you expect that Roman Reigns is going to go to the dark side and join The Authority, what will happen instead is that Dean Ambrose will turn on his friend and become WWE Champion for the first time.    Does Dean Ambrose join The Authority?   It doesn't matter.    Even if it just keeps Roman Reigns from being champion, HHH will be happy, right?   So while it appears as if Roman Reigns is going to make the heel turn, Ambrose will use the distraction to win it all.    Simple as that.    It's not the Shield triple threat match at Wrestlemania I wanted but it will do.

I kind of wonder why Bray Wyatt isn't in the tournament because he'd make a great foe for Roman Reigns to have to overcome one more time, but he appears to be busy with The Undertaker and Kane.   Only there are now four members of the Wyatt Family and only two Brothers of Destruction.   How will this work at Survivor Series?   Someone call Sting and, well, why not, let's bring along Lex Luger too for one last match!   (Okay, maybe no Luger, but three on three with Sting joining the BoD could work if they kept one of the Wyatt Family members out of the official match)     The Survivor Series card could shape up rather nicely with a Tag Team Title match, a traditonal Survivor Series match and maybe even Alberto Del Rio vs. Jack Swagger rounding out the card.

Posted by Joshua Macala at 9:15 AM