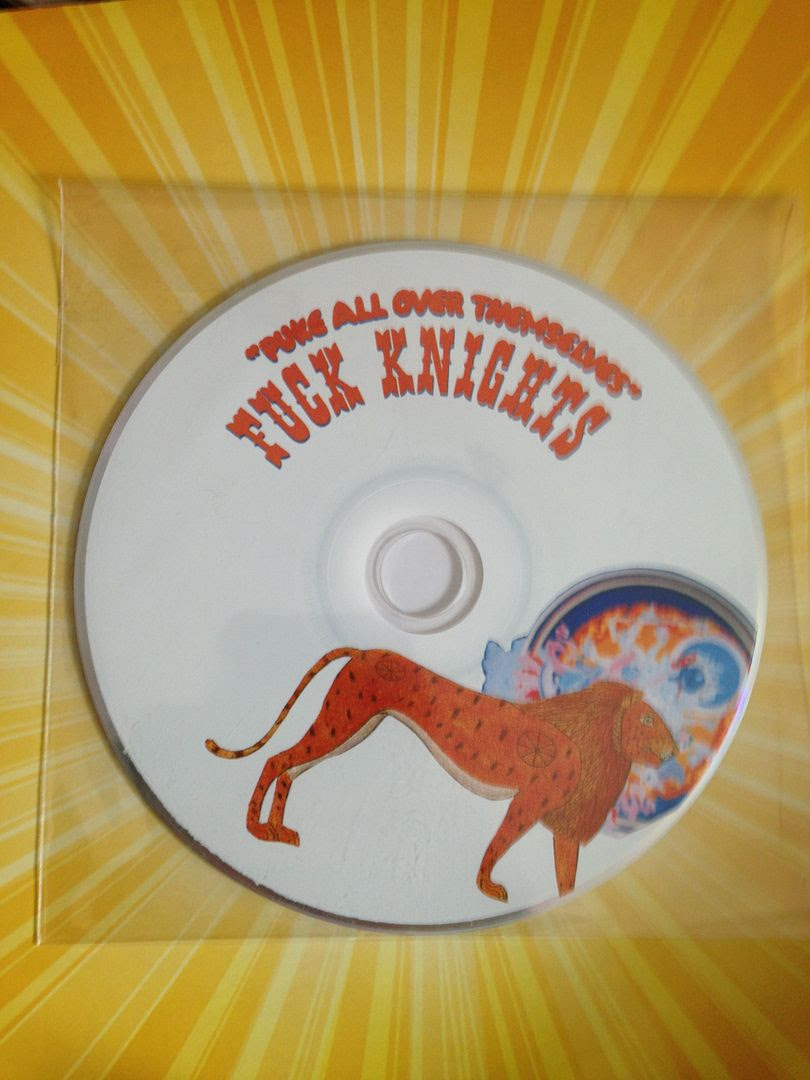 While I received both a cassette and CD for the band called Fuck Knights they were not on the same label but from the same sender.   What I found interesting though is that the Fuck Knights as a band, in my opinion at least, seem to be rather elusive when it comes to internet presence.   It's not that they don't have a Bandcamp page because they do it's just a matter of what's on their Bandcamp page versus what you find on most Bandcamp pages (It really seems like they just put up the audio from a split 7" and haven't touched the Bandcamp page otherwise) though they at least have a link to an official site.

Fuck Knights are a funny band because I can't quite explain to you why they sound the way that they do to me.   They have this bluesgrass rock n roll sound to them with a harmonica and it brings about notions of Supergrass as well (the two -grass endings are coincidental) but then for some reason I'm not entirely certain of I'm also reminded of Blue Meanies for whatever reason.    Blue Meanies were- to keep it simple- a heavy ska band and so to think of them in this way is strange, but I guess if you told me the guys from Blue Meanies changed their style of music to garage/psych rock n roll and this was the new band I'd be inclined to believe you.

Some horns make an appearance later on but I heard the Blue Meanies bits before that even.    When the horns do come out I'm actually reminded a bit more of River City Rebels than anything else.   Underneath this sense of rock n roll comes a certain punk rock attitude and though, again, I can't quite fully explain it I am hearing something in here between Vandals and Pennywise because some of these songs do sound as if they could be leading up to a cover of the song "Come Out Fighting" (Which is a Pennywise song once covered by the Vandals)   Though there can just as easily be an instrumental number, Fuck Knights shows that psych/garage/rock n roll/punk rock is not a cliche to fit into but a genre to redefine and really make think about because it involves a lot of questions and a lot of talent.