A Visit to The Pez Factory: Round 2 (Transformers, Star Wars and Harry Potter) 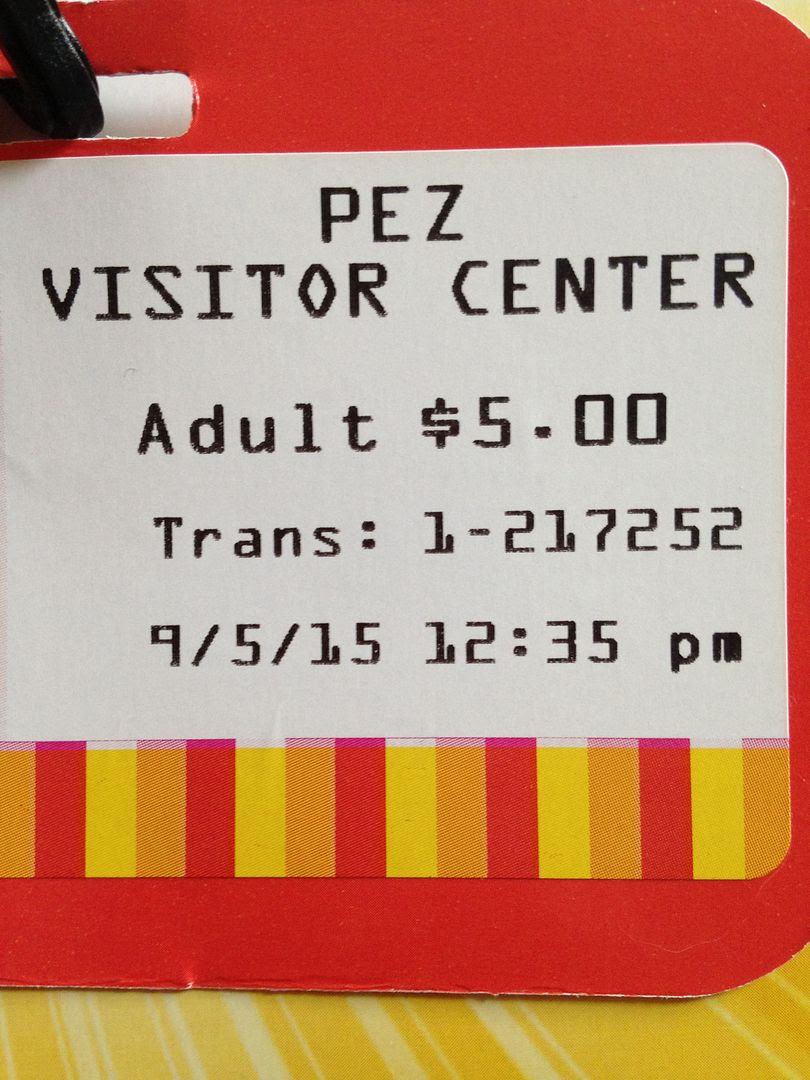 There were three factors which sent us to The Pez Factory on Saturday, September 5th.   We had been at our local Five Below and found the new Transformers Pez dispensers but they only had Optimus Prime and Bumblebee.   I went back a week or so later looking for Megatron but he still wasn't there and I hadn't found the Transformers in other stores yet either.  I knew that he would be at The Pez Factory though.   Pez also posted a picture to their Facebook page where you could sit your head atop a dispenser and turn yourself into a human Pez dispenser.   This became my "We have to go back here soon" status.    And then Pez posted about a new Star Wars collectible tin which looks like Darth Vader and has crystal Pez dispensers inside.   That sealed it for us.   Baseball season was over for the Rock Cats and so our weekends were slightly less busy.    We knew we'd be going to Edgerton Park that evening and so we decided to start our day at The Pez Factory.

For anyone wondering about admission to The Pez Factory, let me break it down for you like this:  It costs $5 to go into The Pez Factory and take your self-guided tour.   However, upon paying for your admission you automatically get a $2 credit to their gift shop which basically pays for a Pez dispenser.   That means admission is really only $3 because who isn't going to buy a Pez dispenser when visiting The Pez Factory?   On top of that, you can also play Pez Bingo, which gets you a free Pez dispenser of their choosing and that's got to be at least another $2 value right there, so really, it's like you're paying $1 to get in.   Oh, but wait, there's more!   You also get a Pez lanyard on your visit which sells in their gift shop for $2 so, really, by going in, it's like Pez is paying you $1!  Wow, where else can you say that about?

When we first got in we noticed the giant Pez dispenser that looks like the Pez kid and as such Quentin had to press the button to watch his head flip back.   We also saw that they had the Peanuts set in stock but we waited on that because we had other goals in mind.  If we don't see Peanuts in stores eventually we'll just go back again and get it.    My wife noticed that they did have the Harry Potter box set, which we didn't think would be out yet for some reason.   I've never been a Harry Potter fan but she wanted to get it and I'm not going to complain because we have dispensers for both Angry Birds and Frozen in our collection as well.

Now last time we went to The Pez Factory- and it was our first time visiting there- they gave us these generic red lanyards and I wrote about how I thought they should have had Pez candy going along them and could have been more decretive.   Oddly enough, we found a Pez lanyard at Savers and bought it for $2 (I believe) and it is similar but still not the same as the one we were given for our tour this time.   So, yes, my only sort of complaint last time through The Pez Factory was the plain red lanyard and, well, this time they fixed that (They were perhaps just out of stock last time?) so it made me much happier.

Along with the Harry Potter and Star Wars box sets and then the single dispenser for Megatron (They didn't have any sort of set for the Transformers, but they did have one for Handy Manny I almost got) we bought a total of four dispensers and then were awarded two for completing Pez BIngo.   Last time we visited I think only I completed Pez Bingo and got an angry looking guy from the movie "Open Season" (Google Check: His name is "McSqueezy the Squirrel") but I thought he was from "Over the Hedge" for some reason.    This time around with Pez Bingo we actually got two dispensers from "Over the Hedge" and I feel that those two movies I mentioned are what make up most of the free dispensers for winning at Pez Bingo right now.    Quentin spun for me and won Hammy, who is voiced by Steve Carrell and rather crazy and when Quentin spun for Gina he got RJ, who is the raccoon voiced by Bruce Willis and sort of the star of "Over the Hedge", a movie Quentin has both seen and enjoyed.

For some reason, there is a "National Bow Tie Day" and as such Pez posted a photo to their Facebook page on that day of what would be the groom in the wedding set of Pez dispensers.    So when we saw it at The Pez Factory I asked Quentin if he wanted it and he said yes.   We also were looking at the nearby Pez- which also didn't have any licensing and we usually just look at the licensed characters- and I saw a polar bear looking one that reminded me of the Icee bear and Quentin loves Icees so he, of course, wanted that.   He picked up a neighboring clown, which I told him he'd have to ask Momma about (But we ended up buying somehow still) and then he also began picking up other bugs and monsters from the same area but I told him that was enough.

As far as Pez dispensers and sports go the only team we have on our Pez is the New York Mets, both as the hat and the ball dispensers.   I feel like if we were going to get Pez for a different team it might be due to our visiting that city.   Clearly we shouldn't buy a Red Sox dispenser, for example, unless it is when we are in Boston, even if not for a baseball game.   But Quentin seems to really like the Cubs and Tigers for whatever reason and when I showed him their dispensers- which they had- he was able to identify them but didn't seem to want them, which is strange because he seems to want any dispenser you put in front of him.   He also didn't seem interested in the Colorado Rockies, which is the major league affiliate of the Rock Cats who are now becoming the Yard Goats.   So we ended up just getting a baseball dispenser that says "Pez" on it for now and that should be a nice start to our baseball collection which one day may or may not contain all of the teams.   I do remember going to Baltimore as a kid to see the Orioles and so if we were to do that with Quentin a Pez dispenser or two might be in order.

Overall we didn't spend as much time at The Pez Factory this time around as we did last time but that was mainly because we had been there before.   Still, looking through the many dispensers there are ones I either overlooked or simply forgot about last time such as three Ben 10 dispensers released in 2010.   If Ben 10 can get three dispensers then clearly Adventure Time can, right?   Finn, Jake, BMO, Princess Bubblegum... There are possibilities to be made and I feel like more people like Adventure Time than ever liked Ben 10, so hopefully this becomes true one day in the near future.    But then it's also just fun to see things that weren't there before and are new to not just me but to everyone.   It can be a bit overwhelming with all that it contains and that's why going back the second time was about as good as the first (But it might have even been better, since we got the official Pez lanyard)  I know we will be back again one day soon though because I still want to get things related to Pez which are not dispensers.

Photos of the Pez Dispensers can be found here: The Pez Kid 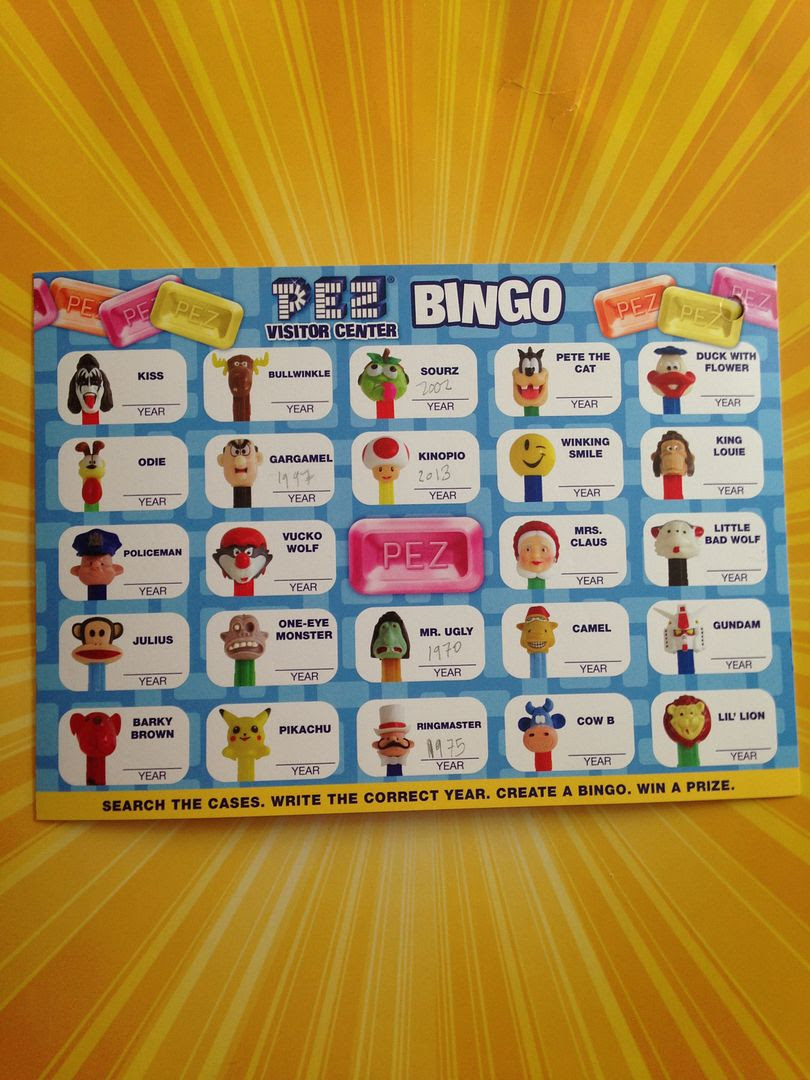 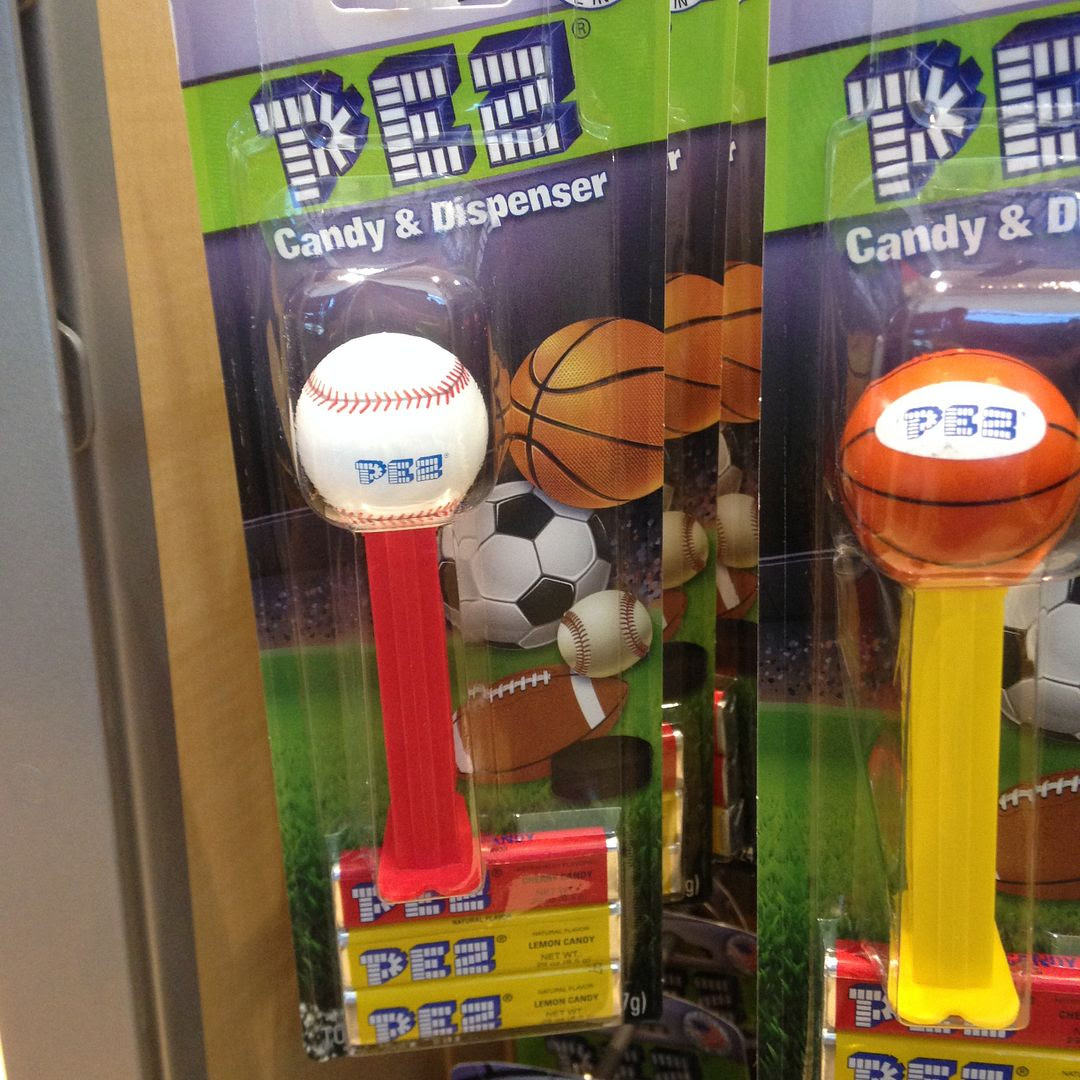 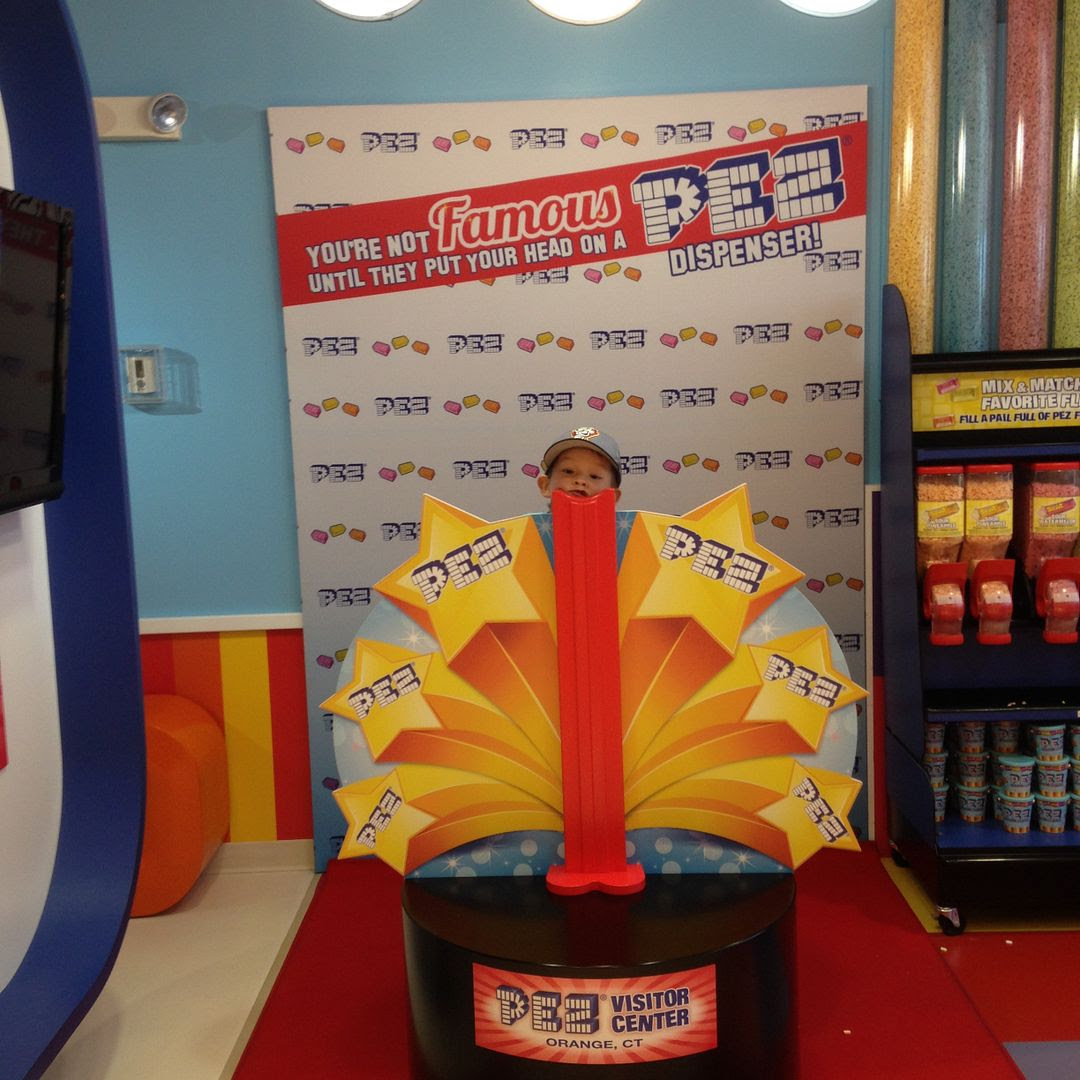 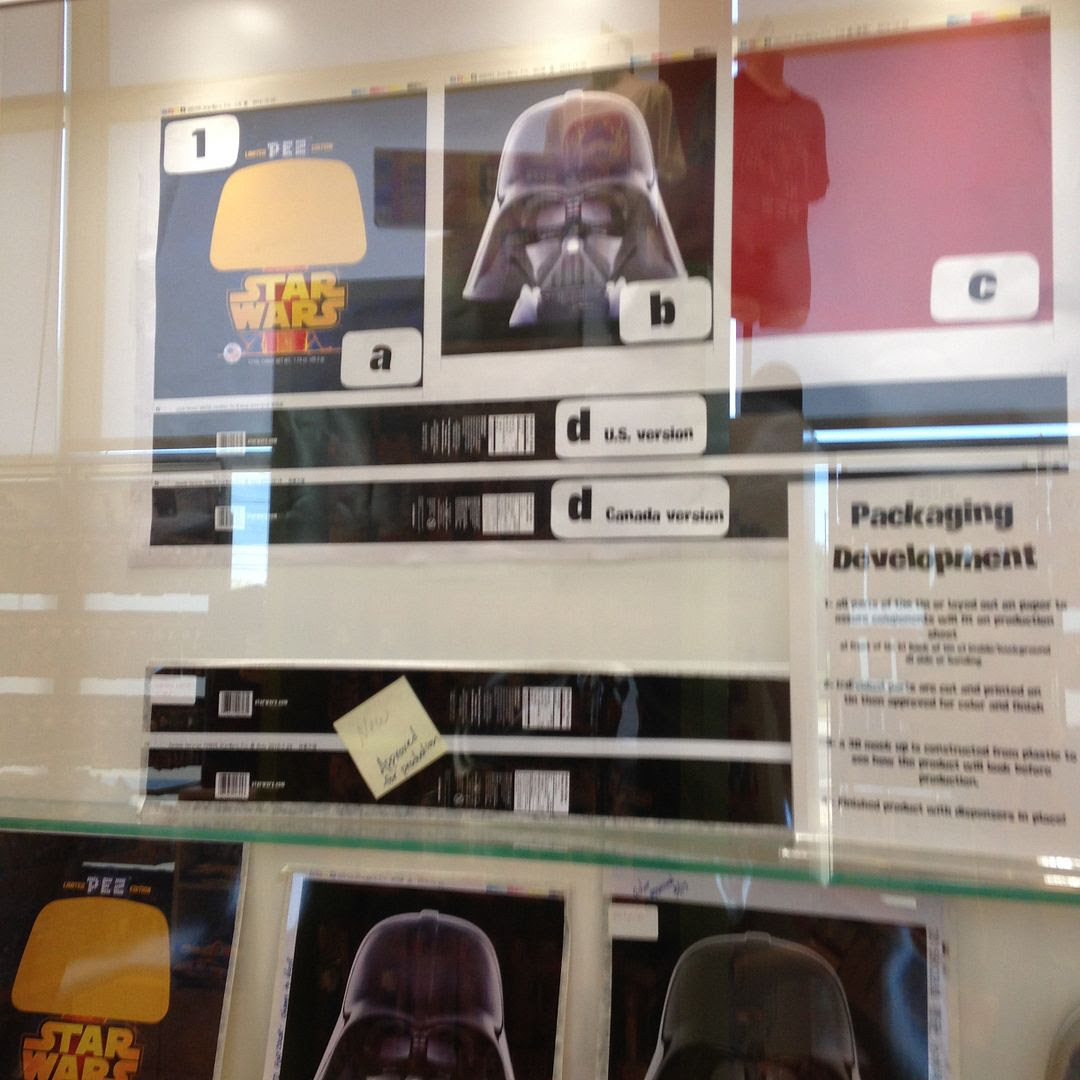 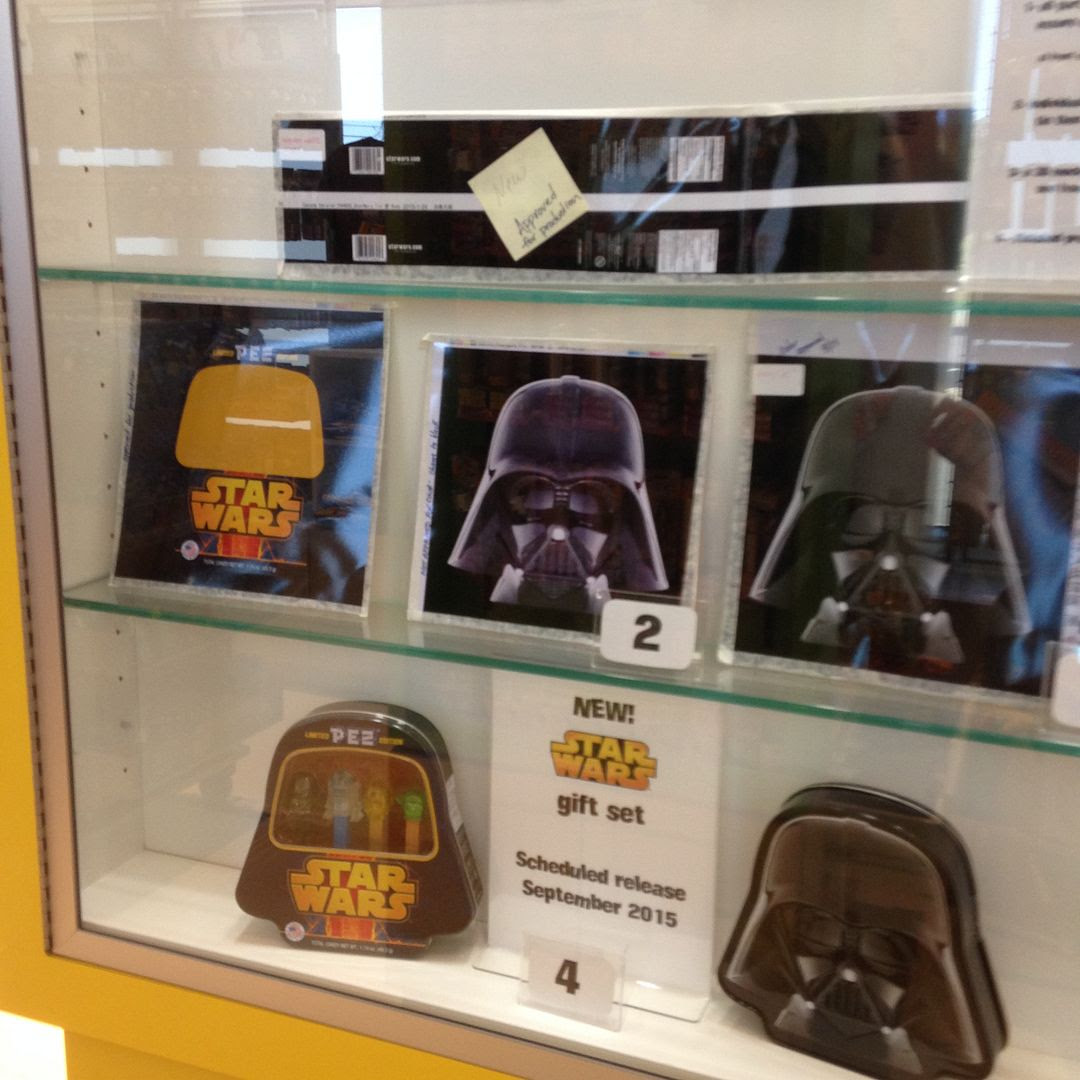 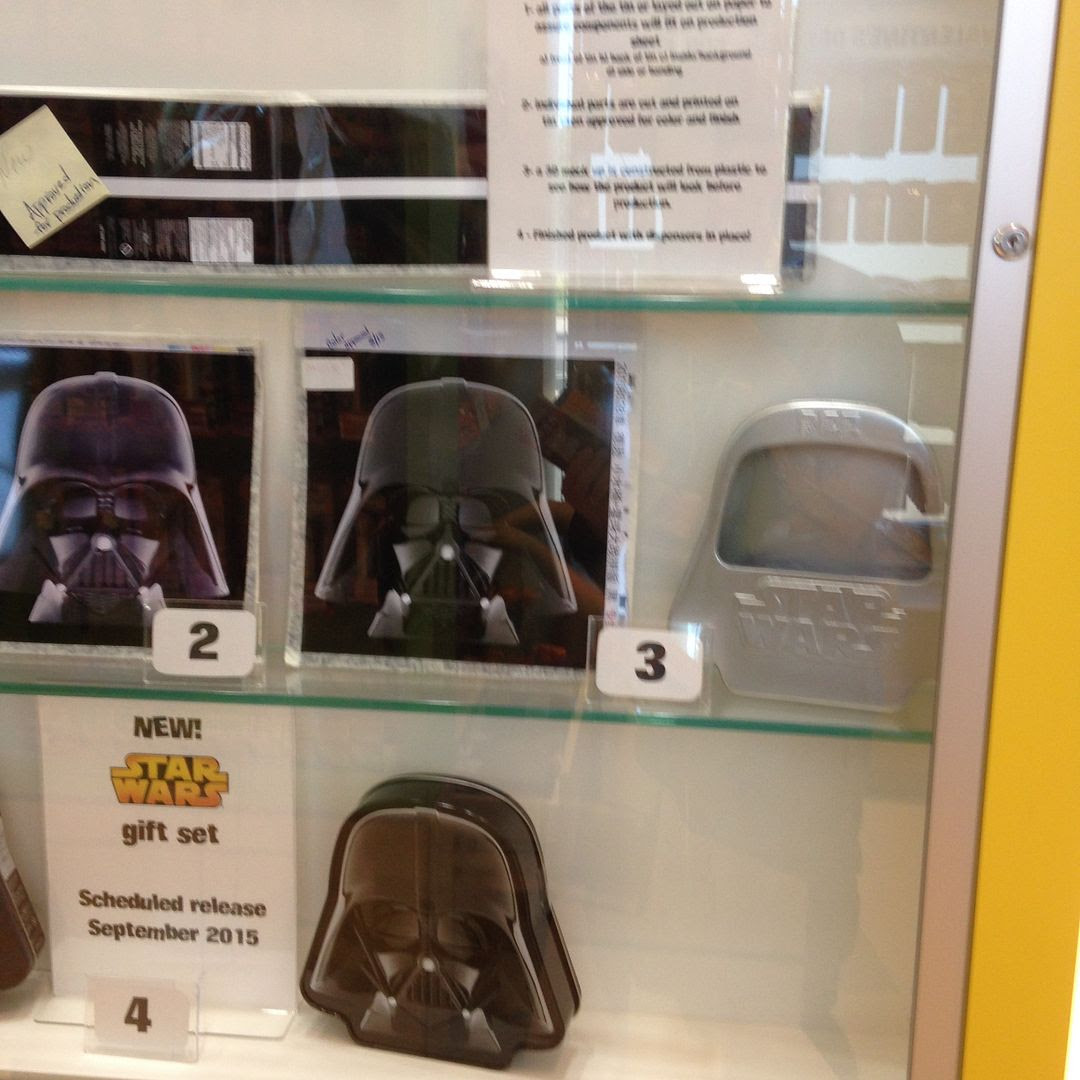 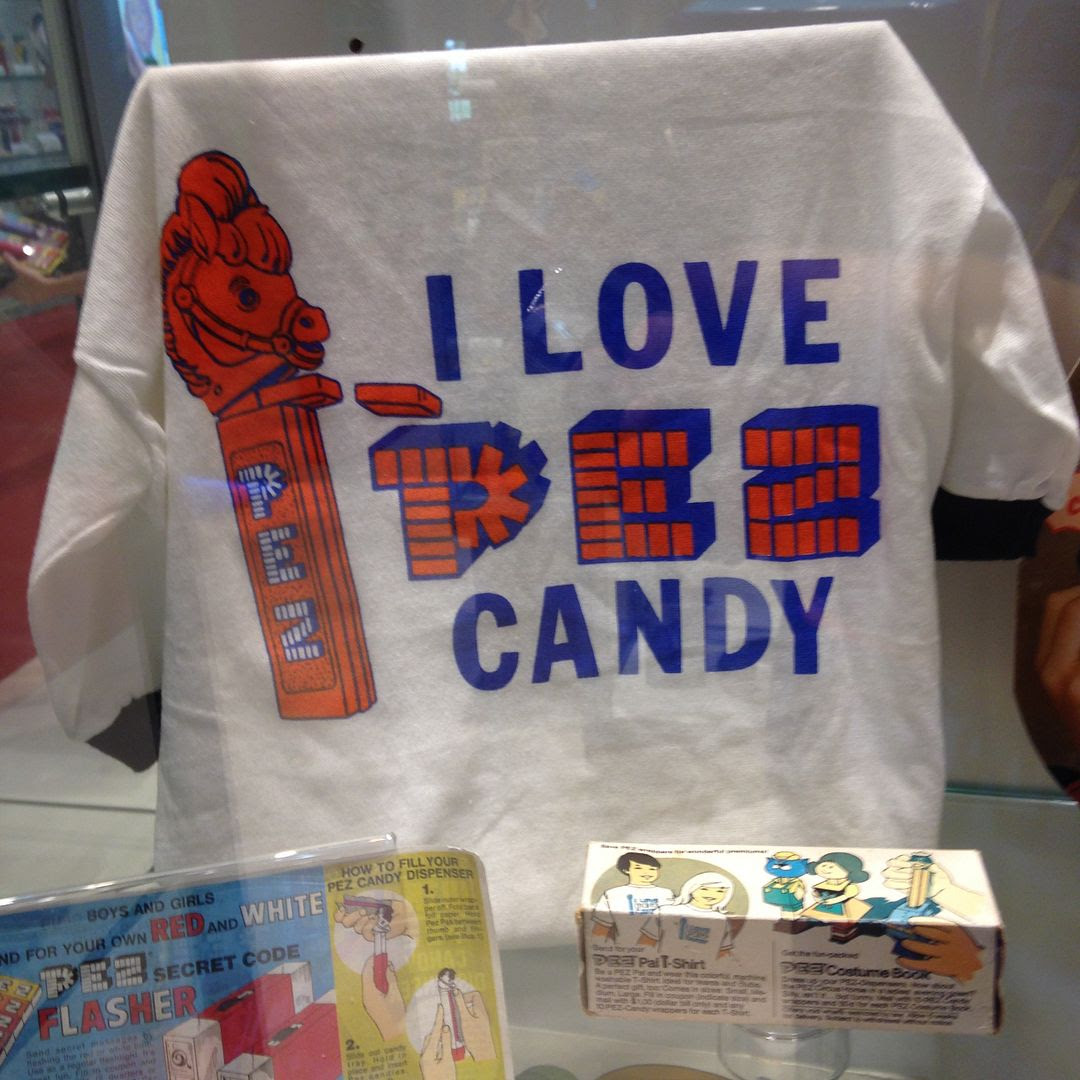 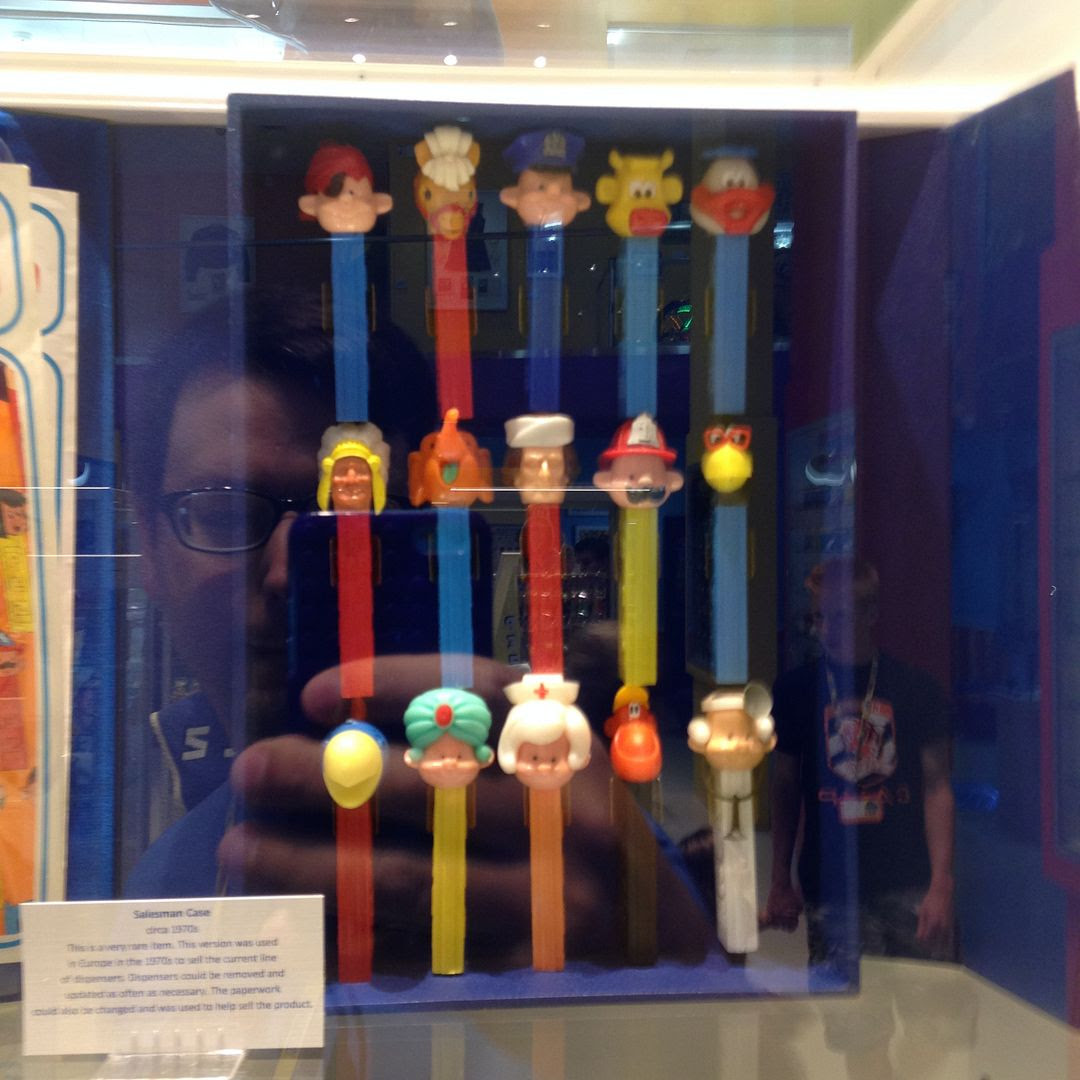 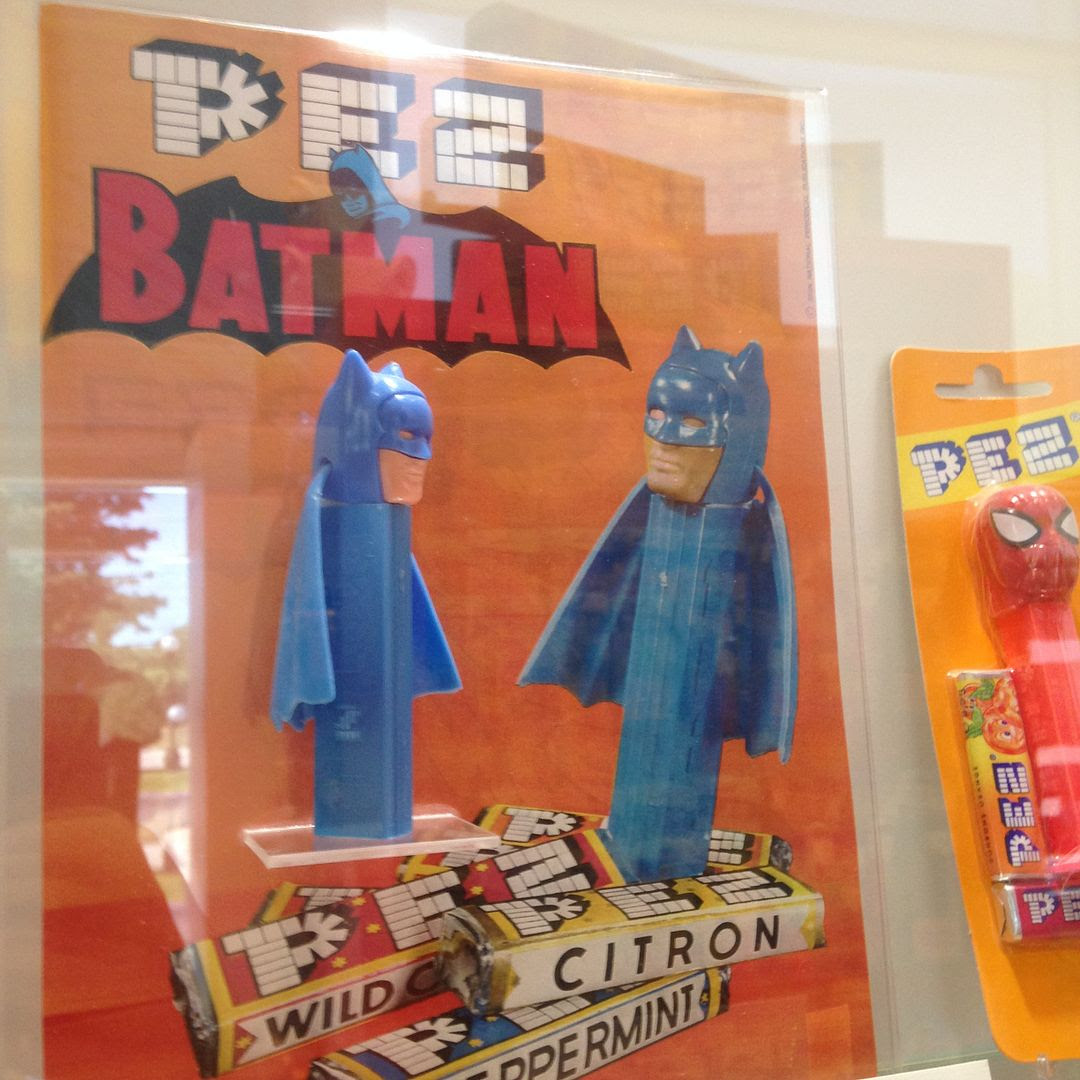 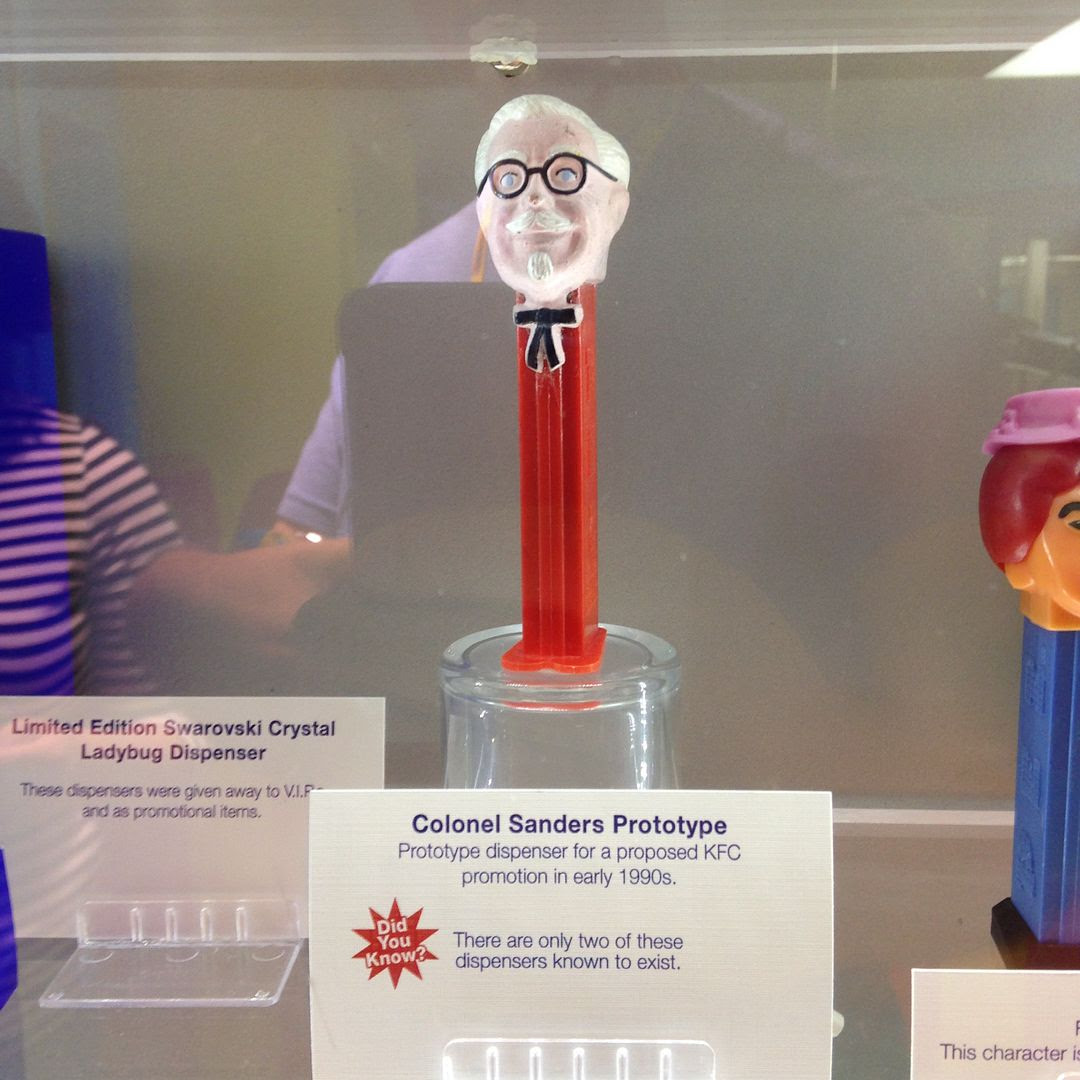 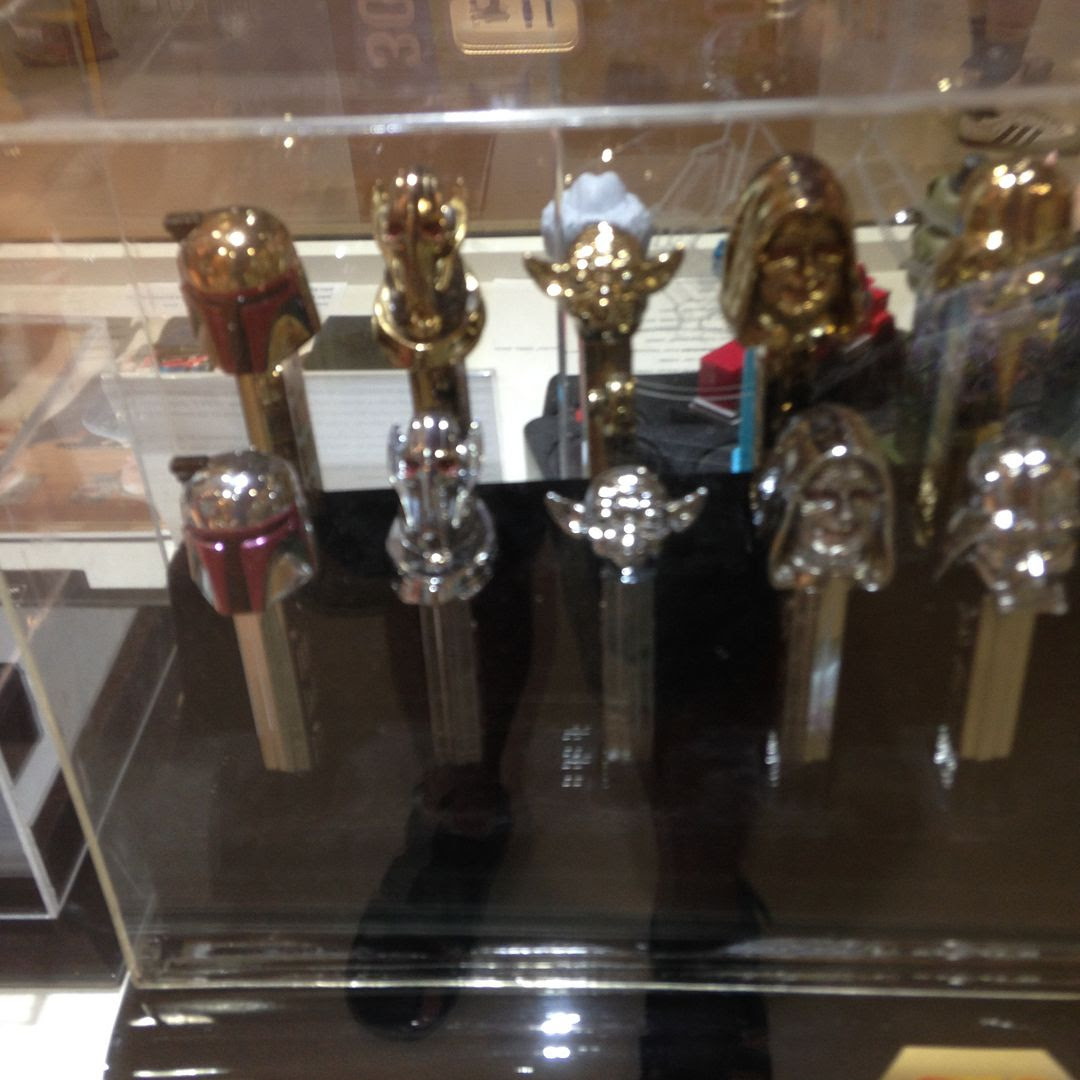 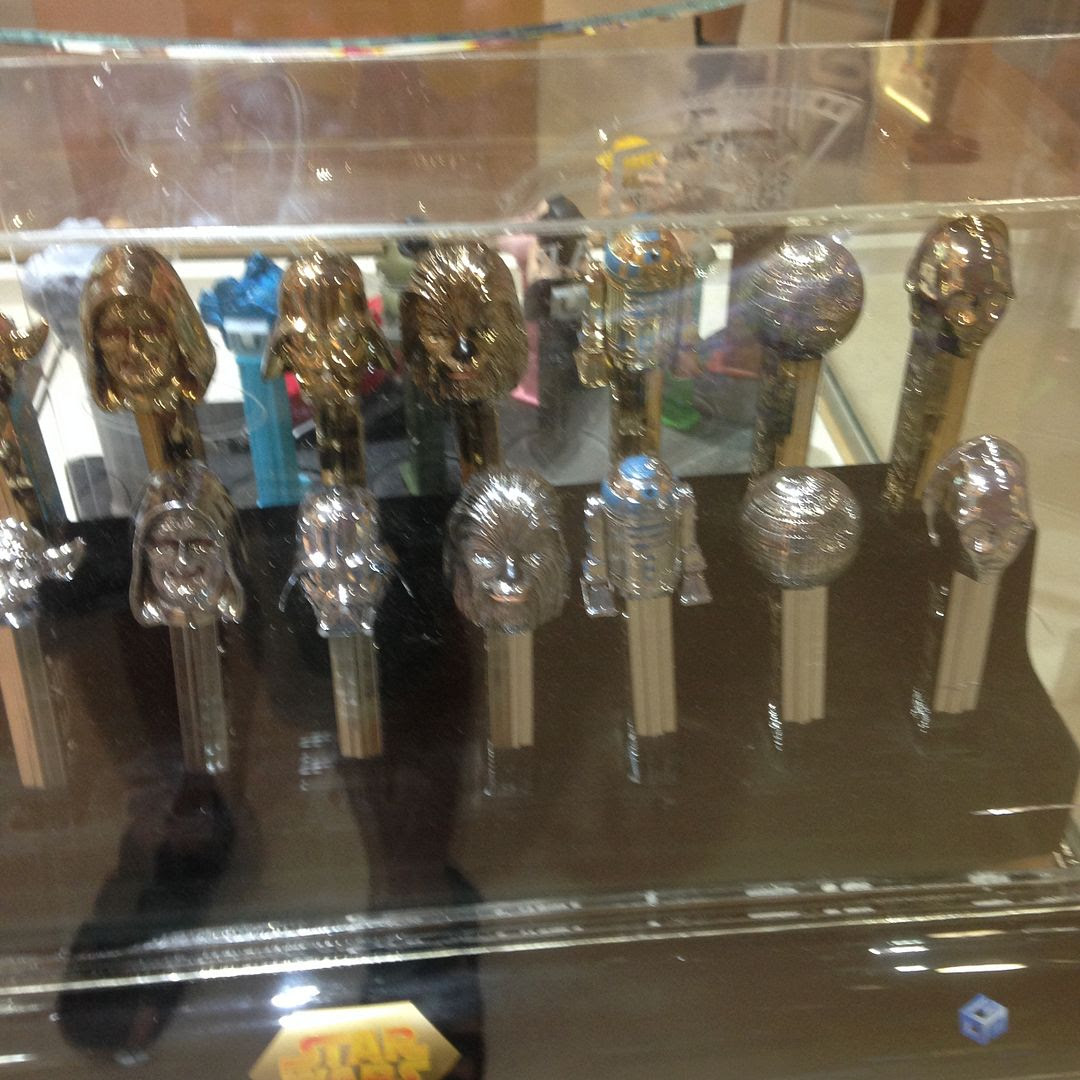 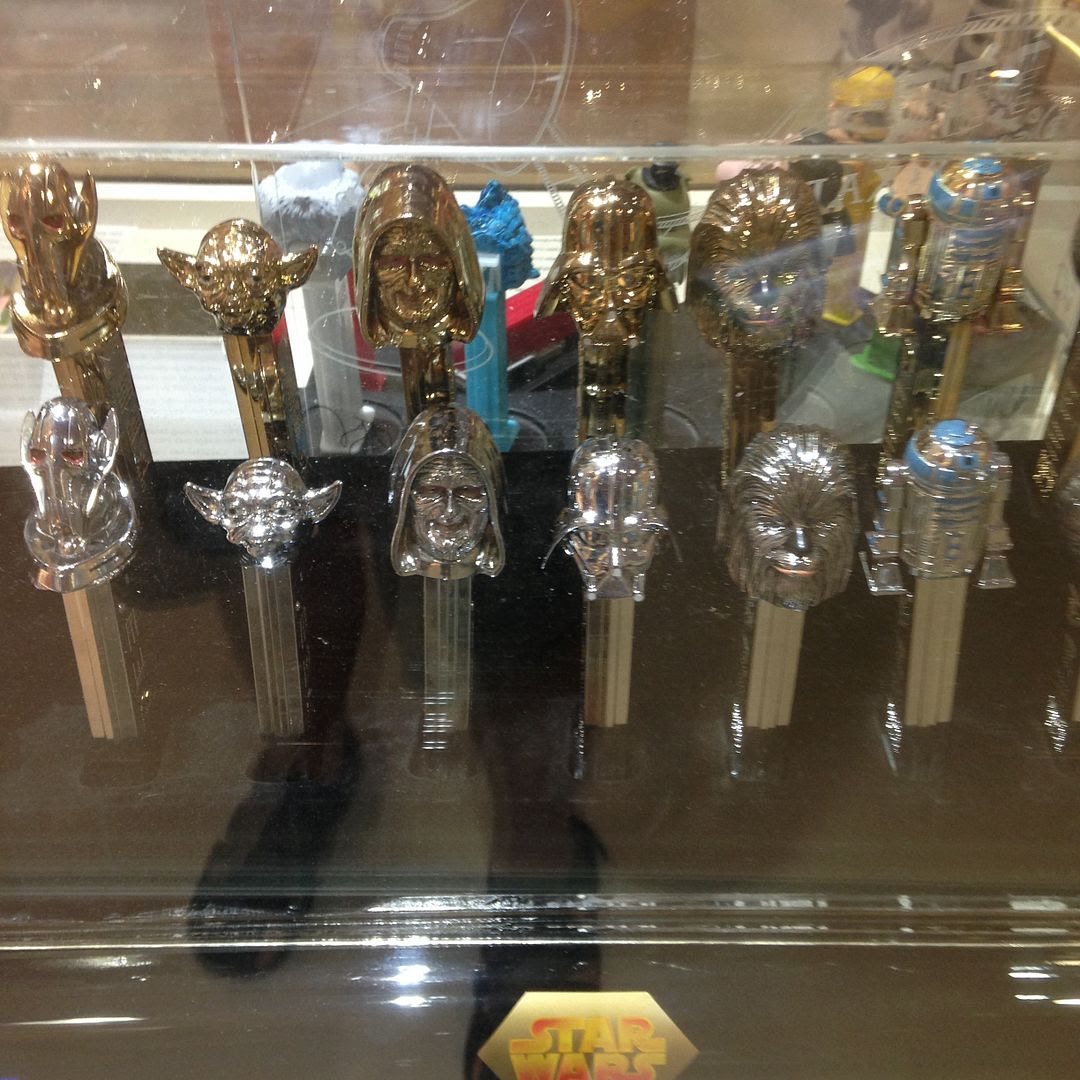 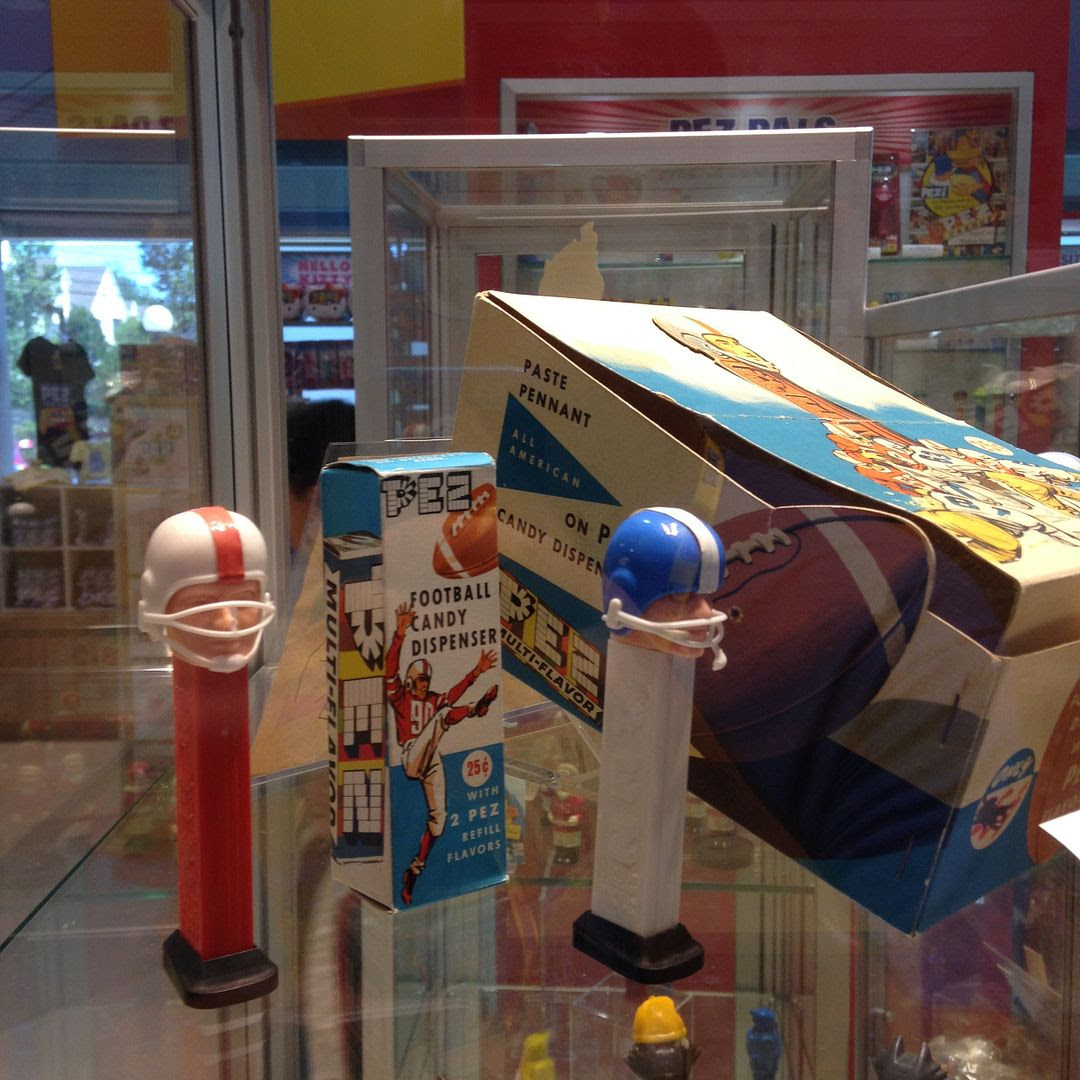 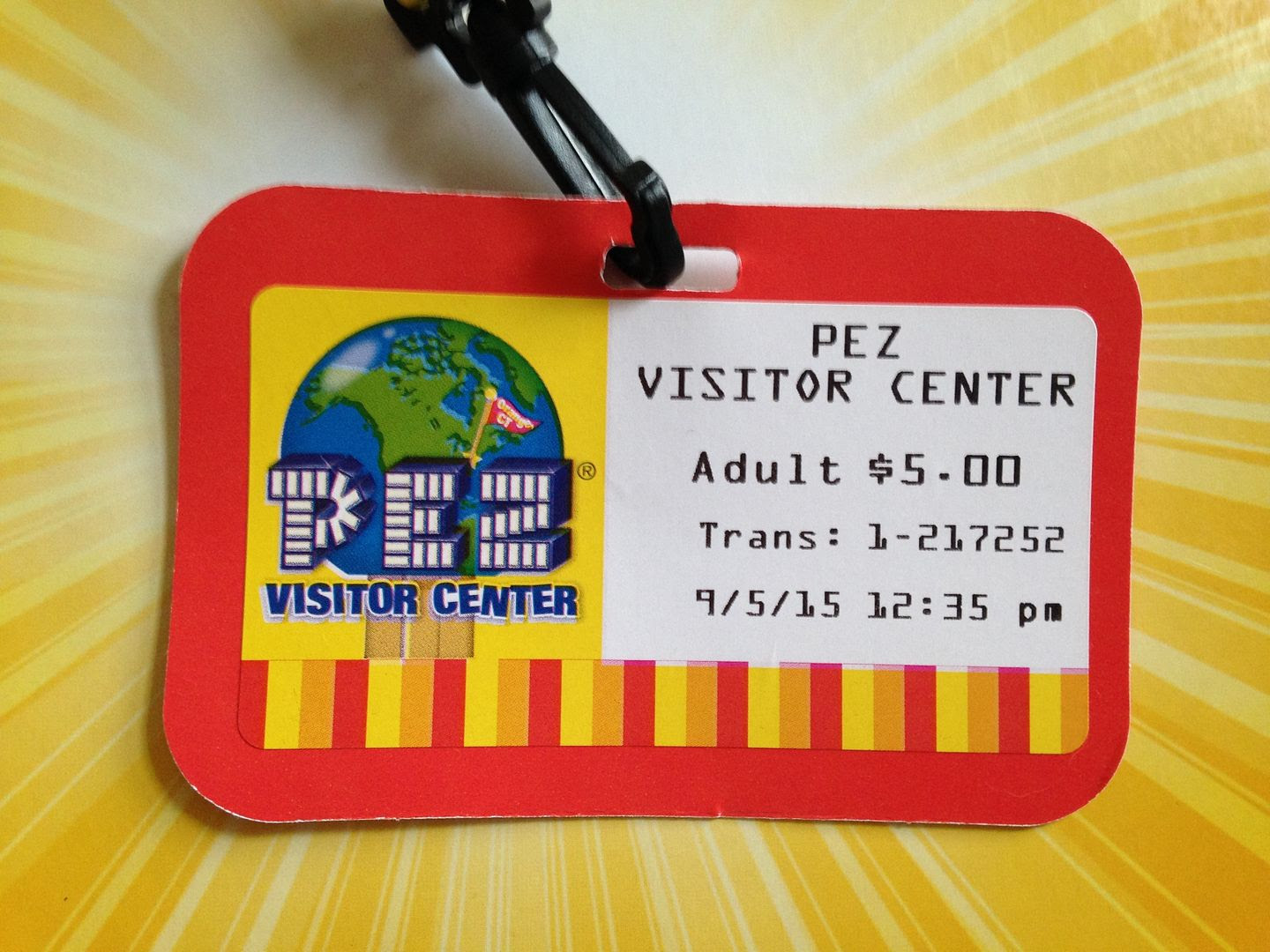 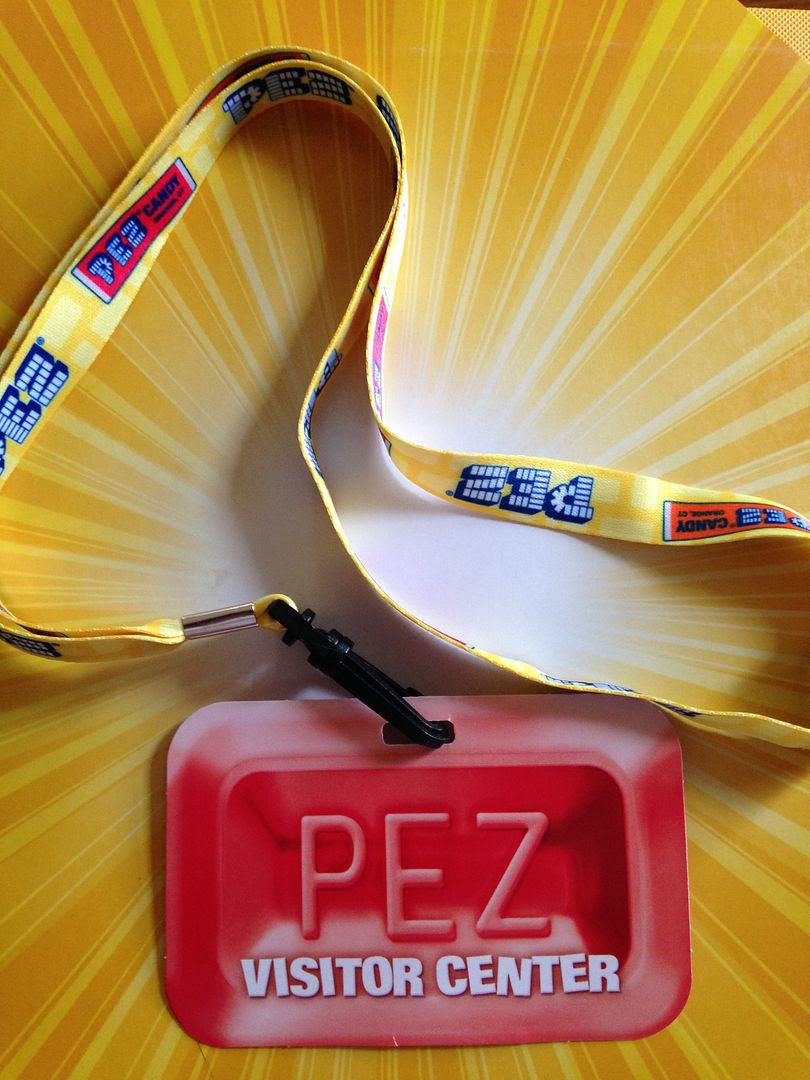